Birthday with a bomb

January 11 2016
67
Some people celebrate birthdays with a cake and candles, others - with a bomb and an explosion. Fortunately, the latter are in the minority. Unfortunately, these latter are politicians, confident that they are threatened by the whole world, and therefore it is necessary to stockpile thermonuclear bombs and blow them up, demonstrating their “power”. However, experts do not believe the North Korean "leader" who allegedly tested the hydrogen bomb. Some analysts from neighboring South Korea believe that it was an explosion of a conventional nuclear bomb, arranged for the birthday of Kim Jong-un (January 8). 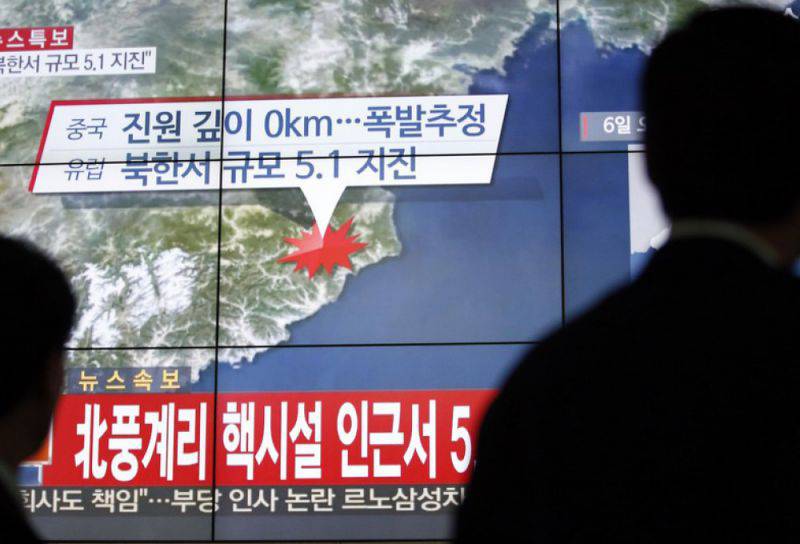 Recall that in the morning of January 6, North Korea announced the successful testing of a hydrogen bomb. (About this bomb, adopted by the armed forces of the DPRK, in December last year, Kim Jong-un himself reported.) In the same statement, Pyongyang noted that he would not use a nuclear weaponif the sovereignty of the state will not be violated.

Traditional accusations were made against Washington. “As long as the United States does not abandon the hostile policy, neither the cessation of nuclear development, nor the dismantling of nuclear facilities by the DPRK will ever be possible,” the statement said.

“The army and the people of the DPRK will firmly increase the just forces of nuclear deterrence, both in quality and quantity, in order to reliably guarantee the future of the revolutionary course of Juche for all ages,” the publication quotes the statement.

Kim Jong-un called the bomb test an act of self-defense against the threat of the United States, reports Gazeta.ru with links to Reuters and CTC.

“The DPRK hydrogen bomb test is an act of self-defense to confidently safeguard peace on the Korean Peninsula and regional security from the threat of atomic war created by US-led imperialists,” said Kim Jong-un.

According to the North Korean leader, such tests are the legal right of his state.

The international community of action of Pyongyang condemned.

An alarming event called the bomb test by UN Secretary General Ban Ki-moon. The 15 countries of the UN Security Council condemned the tests and called them a threat to peace and security.

Security Council presidency diplomat Elbio Rosselli told reporters that the Security Council had already begun working on a resolution that would set forth response measures against the DPRK. The diplomat recalled that the tests are a violation of previously adopted resolutions that banned Pyongyang from any actions related to the development of nuclear weapons and ballistic missiles.

Probably, the new resolution will provide for the introduction of additional economic sanctions against Pyongyang.

The head of EU diplomacy, Federica Mogherini, said that the EU will work with the United Nations on the issue of nuclear testing in North Korea.

The White House, too, was alarmed. Washington reported that they will monitor the situation on the Korean Peninsula.

However, many experts note that the explosion in the DPRK and seismic vibrations do not correspond to the power of a thermonuclear charge. The power of the explosion was about six kilotons in TNT equivalent. It is believed that the test resembles the result of an atomic bomb explosion, similar to the one that was held in January 2013. Thus, North Korea either suffered a fiasco with a hydrogen bomb, or engaged in propaganda, passing the test of a "normal" nuclear bomb for an explosion of hydrogen.

Experts are skeptical about Pyongyang’s claims to test the hydrogen bomb. However, final conclusions can be made in a few days, when experts analyze air samples and examine data on the nature of seismic activity at the test site. Even such an analysis does not guarantee on 100% the credibility of the conclusions about whether a tested bomb was hydrogen or conventional nuclear. This is evidenced by the Deputy Director of the Eastern Institute - School of Regional and International Studies of the Far Eastern Federal University, Associate Professor Artem Lukin, whose opinion leads the site RIA News".

The intelligence of South Korea, openly voiced in the country's parliament, the agency said, show that the power of the explosion was about six kilotons in TNT. And the lower limit of the power of thermonuclear charges is hundreds of kilotons.

According to the expert on nuclear energy, Alexander Uvarov, the low power of the explosion can be explained by the unsuccessful testing of the hydrogen bomb. According to Uvarov, it is more likely that Pyongyang has tested a conventional nuclear bomb to test technologies for creating components of a full-fledged thermonuclear charge.

The Comprehensive Nuclear-Test-Ban Treaty Organization said a "man-made explosion" had occurred in the DPRK. The head of the CTBTO reported notes "Moscow Komsomol"that the magnitude of the earthquake after the explosion was 4,85 (the magnitude of the tests in 2013 was 4,9, and after all in 2013, there was no talk of testing the hydrogen bomb).

According to the head of the organization Lassino Zerbo, who leads "BBC", it is too early to say that it was a nuclear test. Scientists will wait to see if radioactive particles have been released into the air. As Mr. Zerbo pointed out, it may take up to 50 days to detect outliers.

The former head of the administration of the staff of the Security Council of the Russian Federation, the former chief of the General Staff of the Strategic Missile Forces, first deputy commander of the Strategic Missile Forces Colonel-General Viktor Yesin believes that the North Koreans are trying to create a compact nuclear charge for installation on a combat missile.

“In this case, one can only argue that the test of an explosive nuclear device was carried out,” he said. "MK". - The fact that this is a full-fledged nuclear bomb is not at all a fact. Only nuclear weapons were directly tested - an explosive nuclear device based on, as we assume, either weapons-grade plutonium or weapons-grade uranium. This is an independent development of North Korea. Nobody helped her in this, the Koreans made it themselves. And this is not their first test, but the fourth, which indirectly proves that everything was done without any outside help. ”

“At the same time, we believe,” the general added, “that Pyongyang’s statement about the tests, as they call it, a thermonuclear bomb, does not correspond to reality, since, according to available information, North Korea simply does not have the necessary material and technical basis for producing such a charge.”

The expert recalled that the manufacture of the appropriate device requires a heavy water nuclear reactor, while the DPRK does not have such a reactor. Therefore, the “information of the North Korean media”, in the opinion of the general, is “what they want, which they pass off as real.”

The expert of the American research center RAND Bruce Benette told on the air of the BBC that, most likely, the DPRK's hydrogen bomb failed. Or maybe the “leader” lied altogether. Bruce Benetta quotes Gazeta.ru:

““ The explosion, which was supposed to occur during the activation of the hydrogen bomb, would be ten times greater than the explosion that actually happened.

So when Kim Jong-un speaks about the hydrogen bomb, he can lie, and in fact, Pyongyang just blew up a very powerful nuclear bomb.

Or the North Koreans tried to blow up hydrogen weapons, but they didn’t work at full capacity. ”

The Russian reaction to the North Korean test is well known. January 6 Russian MFA website M. Zakharova's comment appeared in connection with the statement of the DPRK government about testing the hydrogen bomb.

The text notes that Russia is carefully studying the statement of the DPRK about testing bombs and analyzing technical control data.

“If the fact of the test is confirmed,” the document says, “this will be Pyongyang’s new step towards the development of nuclear weapons, which is a flagrant violation of international law and existing UN Security Council resolutions.”

The Russian Foreign Ministry called on all interested parties to maintain maximum exposure. “We reaffirm our position in favor of a diplomatic settlement of the problems of the Korean Peninsula within the framework of the six-party negotiation process and the early launch of a dialogue aimed at creating a reliable system of peace and security in the region,” the commentary notes.

Birthday toys are given to the child. So Kim Jong-un received another toy from his devoted Juche teammates. Only not plastic, but deadly nuclear.

In the 21st century, when world politicians, one after another, demonstrate a reluctance to live in peace and a denial of international understanding, and terrorism is expanding and freely sweeping across the planet, the coming global catastrophe is becoming more and more obvious. The fire of the Third World War can ignite any spark - for example, the unsuccessful test of another powerful bomb in the DPRK with the consequences of radioactive contamination. "Reliable system of the world", which hopes the Foreign Ministry of the Russian Federation, on the Korean Peninsula will not be as long as the Pyongyang child is playing with bombs.

Observed and commented on Oleg Chuvakin
- especially for topwar.ru
Ctrl Enter
Noticed oshЫbku Highlight text and press. Ctrl + Enter
We are
DPRK defense potential in Google Earth imagesResults of the week. "Go on a horse, a century of will not be seen!"
Military Reviewin Yandex News
Military Reviewin Google News
67 comments
Information
Dear reader, to leave comments on the publication, you must to register.