January 5 2016
189
What is happening recently in the Middle East is not surprising, or even some special feelings. Actually, everything went to that. If you throw a torch in a barrel of oil, it will light up. And if the barrel is not one - then such a process will go that just hold on. 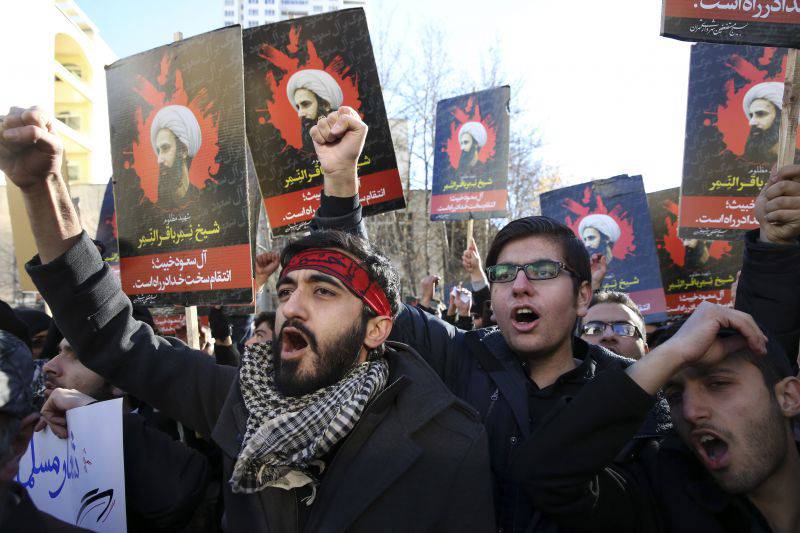 Thank God that even this time Russia has nothing to do with it. This is good news. Although I do not exclude the possibility that the break in relations between our new ally Iran and its eternal rival Saudi Arabia will also be the basis for imposing any sanctions against Russia.

Is it worth taking seriously the fact that two of the three leading countries in the region overnight broke off diplomatic relations?

Diplomatic attacks towards a neighbor are not yet a war. Although in not so old times it was precisely with such demarches that disassembly began, developing into a global disgrace like the First World War.

And the two regional "superpowers" of the Middle East have something to share. In general, there has never been a “warm and friendly” relationship between Iran and Saudi Arabia. On the contrary, there is a whole heap of contradictions, from which only problems are obtained.

Countries diverge too much in religious, economic and political matters. More precisely, it is easier to find at least some points of contact.

The Kingdom of Saudi Arabia is a Sunni monarchy, the Islamic Republic of Iran is a Shiite center of the world. Both countries are the largest producers of energy resources and constantly compete for the markets for their main export products - oil and gas. And also - not least - for the souls of the believers, competition is no less than for oil.

The crisis in his pockets sharpens foreign policy. It is a fact. Do not think that the current state of affairs in the oil business does not affect the Saudis. Reflected, they will not go anywhere. And, if all those who sell oil and gas in their pockets have 60 dollars less per barrel, then Saud is no exception. A lot of money does not happen.

In the 2016 year, the old but still strong player returns to the arena of the Middle East theater. And it makes sense to try to “knock out” the player before he starts playing at full strength.

Of course, the beginning is not the best. Nimr en-Nimr was a very famous person among the Shiites. In general, the execution of a priest did not bring anyone any political points. Moreover, no one has come out openly with evidence that Nimr al-Nimr conducted terrorist activities. Obviously, the essence is different. The bottom line is that Iran is waging (without hiding it) the war for the religious influence of Shiism in the region. And in this light, the elimination of Ayatollah an-Nimr is quite understandable to himself.

Yes, one of the executed was one of the leaders of the al-Qaeda cell in Saudi Arabia, Faris Al-Zahrani. Who were the rest of the 45 people - the question, which in principle is not important.

It is important that none of those who campaign for democracy did not come out with angry condemnations. Still, not every day about fifty people are executed. But what about all sorts of moratoria? What about freedom? Well, okay. What can be one, then nothing else. Passed more than once.
It is clear that the oil crisis in the region requires (more precisely, the Saudis demand) that Iran be pushed back into the sanctions pit. You can release the same, but ... later. When the barrel will cost not 36, and 100 dollars. True?

True. But, alas, the word has already been given. Released.

Then the old and tried way. We, here in Russia, have known this to everyone for a long time. Oh, those barbarians in Iran! How can you talk about anything at all? The glasses were broken, the diplomats were scared ... No, just back into the sanction pit! The only way!

Dipcorpus must be with strong nerves to pick up. But it was too tender for a diplomat to go with BV ... I wondered if Lavrov would learn ...

But - done. And to all, in general, do not care that on one side of the scale two dozen broken glasses, and on the other - a killed priest. Unequal? Yes, but who cares?

I waited, I confess, a terrible cry from overseas. In defense of the executed. But I confess, I waited in that sense, to see how this cry was spat. Not wait. What was recited from Washington, calls for Riyadh and Tehran for diplomatic dialogue, "encouraging diplomatic communication" and calls for "taking positive steps to calm tensions" is, excuse me, baby talk, no more.

The statements of the European Union were made in the spirit of similar reports from Washington. The spokesman for the head of EU diplomacy, Catherine Ray, noted that "the EU is closely following the situation around Saudi Arabia, keeps contacts at all levels and continues to call for keeping the situation under control."

Do not tear the throat there, summoning. And then yell far away ... they will not hear.

Yes, everyone urged not to escalate confrontation in the region. However, the “process has begun,” as one former politician used to say, and now a political corpse.

The situation, of course, is not quite out of control. Moreover, it is unlikely that in the near future a real military conflict is possible, which the “experts” have so actively spoken about in many media. So far, open warfare does not seem to be something real, if only because of the lack of a common border. But. There is Iraq, where it is now a little quieter than in Syria, and, oddly enough, there is Yemen, where the SA and Iran quietly kick each other by proxy. And there is the Persian Gulf.

Of course, all this is pitchfork on the water of the Gulf and is written. There will be no conflict. At least for now. So far, the Saudis do not have the forces to openly confront Iran, however strange that may sound.

Yes, the SA army at first glance has a newer technique than the Iranian one. And what's more, the Saudis would like even more modernization. But at first the Germans flatly refused to sell “Leopards-2” (you see, they do not trade with an autocratic state weapons), then the Russians are considering something for a long time about the sale of 650 units of BMP-3 ... But even in this aspect, the CA army is very impressive quantitatively.

But the quality ... with quality is worse. Over the past 100 years, the Saudis have been involved in three conflicts. And in one, for the disputed territories with Yemen (it was in the 30s of the last century) they even snatched their territories. But this is like a conflict with Russia and Georgia, approximately of such a plan. I don’t take the Gulf War into account at all, there was one 12 for it, and 12 from 11 is purely on dancers from the USA. But in the Arab-Israeli war did not really work ... not at all.
Iranian army looks more impressive. Yes, there is also a lot to be updated, so it’s easier for Iran. Ally drew. Poor erasable. Probably help. But Iran’s fleet is such that in case anything happens, you can forget about free movement along the Gulf.

But this is all the lyrics. The essence is different. The bottom line is that with all the tension of the situation at first glance, it’s definitely not worthwhile to conclude that there will be a war between Iran and Saudi Arabia tomorrow. So far, there is no one to fight, no one, no reason.

But oil on the background of all this went up. What is in the hands of all the participants of the Middle Eastern circus.

Ctrl Enter
Noticed oshЫbku Highlight text and press. Ctrl + Enter
We are
Iran in the Syrian conflict. The confrontation with Saudi Arabia and the interests of the ShiitesOur memory. Kaluga wonder. Reportage. 1 part
Military Reviewin Yandex News
Military Reviewin Google News
189 comments
Information
Dear reader, to leave comments on the publication, you must to register.