December 30 2015
31
Fifteen years ago, the CIA tried to predict what the world would be like in 2015. The British newspaper The Telegraph analyzed the old report of the Central Intelligence Agency, dated 2000 year, and highlighted the come true and erroneous forecasts, as well as the fact that the experts completely missed. 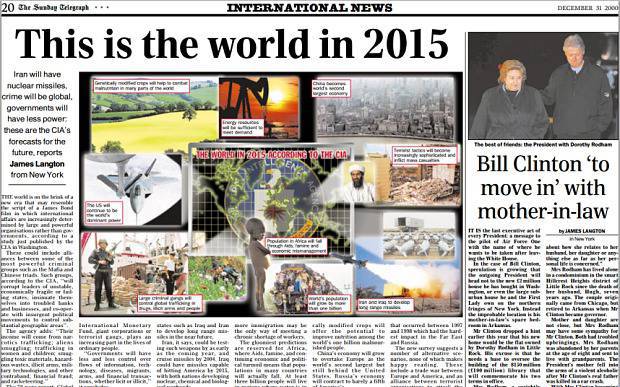 15 years ago, the CIA tried to predict what the world would be like in 2015. Looks like they made mistakes in their predictions. This was told by Lawrence Dodds in a British newspaper "The Telegraph".

In 2000, the CIA created a group of experts outside the agency whose task was the futuristic forecast up to the 2015 year.

Many of the conclusions of those experts are indisputable, the journalist jokes. The water was still wet, sugar was still sweet, ethnic and religious tensions still plagued poor countries.

But what about eating cloned beef burgers? Or the union of North and South Korea?

In 2000, experts hired by the CIA correctly predicted the “explosion” of digital and mobile technologies that transformed the world. The Internet, the prospect of the universal spread of wireless communication with the help of hand-held devices and a large number of low-cost satellites flying at low altitudes, universal wireless cellular communications, which will lead to a global transformation of society unseen since the beginning of the industrial revolution - all this is true. The current smartphones that have spread all over the planet have seven times more processing power than the chess computer that once beat Garry Kasparov. And these smartphones fit in the palm of your hand.

The forecasts associated with the growth of network technologies have come true. The IT revolution has led to political consequences, as promised by futurologists.

In the Middle East, there will be a “web-connected opposition”, which has thrown new challenges to authoritarian regimes, experts said. And so it happened: the "Arab Spring" happened.

However, something else happened: the very same technologies created new opportunities for conflicts between large states. This was confirmed after the “Chinese and Russian cyber attacks against the United States” and the use of the Stuxnet computer virus by the United States to sabotage the Iranian nuclear program.

The CIA was "overly optimistic" about the consequences of the development of biotechnology. Private profiling of the genome and artificial cultivation of "spare organs" will become commonplace, experts said in the 2000 year. Animals will be cloned to provide humanity with meat, and terrorists will engage in genetic engineering to create new dangerous diseases.

Some of these predictions still seem fantastic.

Something, however, came true. Prices for the services of genomic masters have fallen sharply over the past five years. The forecast for genetically modified crops was also correct. Despite resistance to GM crops, they have spread throughout the world. 82% of the world's land is sown with modified soybeans, 68% - GM cotton and 30 percent - GM corn.

The experts' mistake was the forecast for Russia, the journalist points out.

Analysts assumed that Russia could “react painfully” to the loss of its superpower status and that it could use its gas reserves as a lever to regain its status. However, analysts believed that the “most likely outcome” would be a weak Russia, whose hands would be bound by international diplomacy. Russia will be able to influence world events only with the help of a veto in the UN Security Council.

It turned out otherwise. Putin "created a whole network of influence - from Greece to Syria, intervened in foreign wars, annexed new territories ..." And instead of the predicted 2500 nuclear warheads, he now has more than 8000.

Experts were mistaken with the prediction about the reunification of North and South Korea.

Another major mistake is the creation of a Palestinian state next door to Israel.

The report correctly stated that the world population will grow to 7 billion. and that growth will slow down, or even decline, in Russia and Eastern Europe. This is true: there are fewer people living in Russia today than in the 2000 year.

But not so in Africa. Instead of reducing the population due to the AIDS epidemic, more people are being born in sub-Saharan countries.

Regarding the demographic crisis in Western countries, the experts were right. The CIA had foreseen that the population in developed countries would age, leading to a slow crisis. Reducing the attitude of workers to retirees will create tension in the system of social services, the pension system and health care. Governments will seek to alleviate the problem through raising the retirement age, encouraging greater participation in women’s work and migrants. However, immigration will complicate political and social integration: some political parties will continue to turn society against migrants, protesting about the new burden on the social services system and the difficulty in adapting.

Sounds familiar? All this, the authors predicted correctly.

In terms of financial prospects, experts predicted a high level of growth throughout the zero years. And it came true. However, analysts believed that the global economy will show good momentum and sustainability up to 2015. The risk of financial crisis will be exposed only to developing countries that could not carry out liberal reforms.

In fact, today, experts are talking about the coming “bank collapse” in the United States, who were to blame for the “failure of the world economy” and even caused “a new conversation about the limits and wisdom of capitalism.”

The EU has been called by the forecasters "relatively peaceful and rich" (in 2015 year) and reached the stage of "final integration". Of course, this is far from the case.

Of the predictions about international terror, only “half the truth” has come true. Despite the fact that the CIA was worried about even more deadly terrorist attacks than those that occurred on September 9, 11, experts still could not imagine to what extent terrorism would rise on the planet.

The reality can be even worse than the ideas we have today, at the end of 2015. There is information about the use of "IG" chemical weaponsstolen from the Syrian government, as well as the creation of its own chemical weapons by militants.

The “Islamic State” has become such a complex terrorist organization that it is able to carry out and inspire attacks all over the world. Her bloody activities are funded by the smuggling of oil, the illegal sale of antiques and taxation.

And these are not just some felons. Unlike criminal gangs, IG is not just trying to finance itself; This structure “has its own apocalyptic ideology,” which puts these Islamists at the epicenter of the “last confrontation of Islam and the West.”

Will the experts risk issuing a report on what the year of the 2030 will be? Who will be the new hegemon there? And who will be on the cover of "Time"? And will there be a “Time”? Hey, CIA!

Observed and commented on Oleg Chuvakin
- especially for topwar.ru
Ctrl Enter
Noticed oshЫbku Highlight text and press. Ctrl + Enter
We are
Results of the week. “And the Crimea of ​​the Fatherland is sweet and pleasant for us!”About the airborne special forces battle group
Military Reviewin Yandex News
Military Reviewin Google News
31 comment
Information
Dear reader, to leave comments on the publication, you must to register.