Republic of California. The Bear Revolution

December 25 2015
7
On the one hand, the Republic of California remains one of the curiosities of the American-Mexican war, on the other, it is one of the most visible evidence of the historic collapse that the Mexican state suffered by 1846 year. Impoverished, exhausted by endless coups, insurrections and uprisings, Mexico had lost not only Texas by that time, which after several years of independent existence had joined the United States, but also Yucatan, which also declared itself a separate state and led a fierce armed struggle with the central government. Against this background, the emergence of another hotbed of separatism was inevitable. 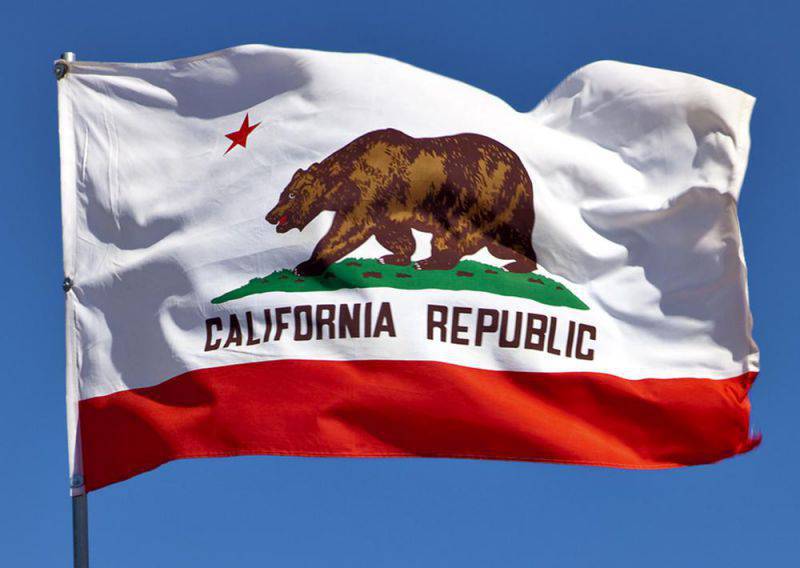 By the time the United States under the leadership of President James Polk were ready for the invasion. Having provoked the enemy first to apply weapon (the Americans later used this technique several times), 13 May 1846, the United States declared war on Mexico.

According to a common version, American settlers in California did not know about the beginning of the war, when they were revolting. The version is, frankly, doubtful, because, despite the underdeveloped means of communication, a month is a long enough period for such an important newslike war. And if we recall that roughly the revolution in Texas also began, then here, most likely, an event took place that today would be called a hybrid war.

The prehistory of the conflict speaks in favor of this version. Shortly before the outbreak of the conflict, a US army expedition led by Captain John Fremont, son-in-law of Senator Thomas Hart Benton, famous for his expansionist views, proceeded to Oregon through Upper California. The action was marked by noise and provocations against the Mexican authorities. Later, Fremont contacted Thomas Larkin, a well-known businessman in Upper California, a lovelace, and in combination - the only US consul in this Mexican territory. Back at the beginning of 1846, Larkin received a letter from Secretary of State James Buchanan, which actually contained direct indications of actions to destabilize Upper California (Alta California) in order to facilitate its secession from Mexico. The war at that time had not yet begun, but the pre-storm mood literally was in the air. Both Larkin and Fremont knew perfectly well the plans of President Polk, for whom the Pacific coast had become the idea of ​​a lifetime.

8 Jun. William Eid, the future leader of the uprising, received an anonymous letter stating that Mexican government forces were burning crops and stealing cattle, and Captain Fremont invites American settlers to organize and fight back the enemy. The citizens who arrived to Fremont with great displeasure found that he could not help them not only with the supply, but he did not even have an adequate plan.

In a short time, the rebels seized 170 state horses (all of them were brought to the Fremont camp), as well as the barracks of the Sonoma garrison, which became their headquarters. In the same place for the first time the Californian "bear" flag was raised. 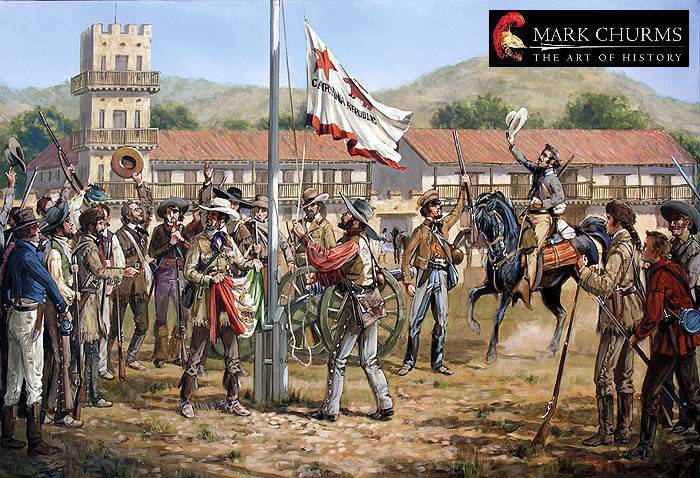 At the same time, the most acute shortage faced by the militants turned out to be a shortage of gunpowder: there was almost none at all. It was decided to send messengers to the American ship Portsmouth, in which the rebels asked for gunpowder to defend against the Mexicans. The rebels themselves for the more convincing called "compatriots."

At some point, the uprising formed two of the most organized and active centers - in Sonoma and the Fremont camp, which was located near Fort Sutter. Fremont himself, however, was determined to help the Sonoma rebellion and moved towards her at the head of his squad of about 90 fighters.

At this very time, John Sloat, commander of the Pacific squadron, which was in the harbor of Monterey, was waiting for convincing evidence of the beginning of the war between Mexico and the United States, in order to begin active operations against the capital of Upper California. It was there that he received information about the uprising of the American settlers, as well as that the Mexican military authorities, led by General Castro, were preparing to suppress the insurrection.

But Sloat was in doubt. 4 a year ago, his predecessor, Thomas Jones, gave the order to capture Monterey, mistakenly deciding that the war had already begun. The result was embarrassment, a diplomatic scandal and the removal of an overly zealous naval commander.

The conversation with the consul Larkin apparently had a decisive effect on the squadron commander, who literally stated the following: “Later, they may accuse me of something that I didn’t do, but they might also say that I went too far. I prefer the second. 6 July was decided to act. July 7 frigate "Savannah" and sloops "Levant" and "Sayan" captured the capital of Upper California. On the same day it was announced in English and Spanish that from now on California is part of the United States.

The California Republic uprising ended two days later when an American officer from the Portsmouth ship arrived at the insurgents in Sonya with two US flags — one for Sonoma and the other for Fort Sutter. After that, an isolated uprising finally became part of a major continental war. 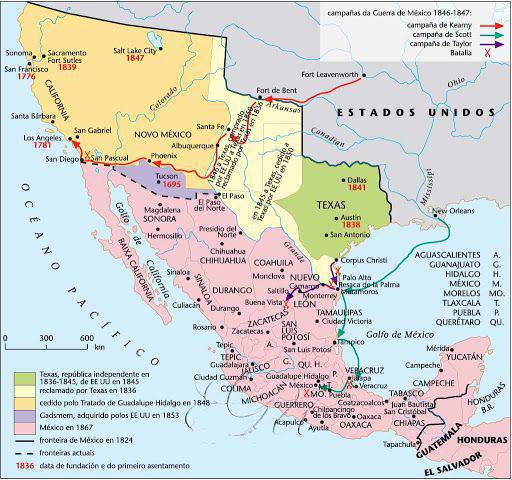 It is worth noting that along the way, American diplomacy had to urgently resolve the issue of the vast territory of Oregon in order not to get a second front with Britain during the war with Mexico. The territorial dispute was unleashed by compromise: the region was divided in two and the border became as we know it today. If London could have foreseen what consequences for him would be the loss of half of Oregon and, moreover, the complete military defeat of Mexico, he would undoubtedly have done everything to prevent such an outcome. An open war with both Britain and Mexico at the same time the United States at that time could not stand it. But the British were engaged exclusively in the struggle with Russia and overlooked the threat from the West.

The Republic of California existed for two weeks, there were only about two hundred citizens, and did not have any civil administration. It is difficult to call it even a rebel movement, not that the state, but modern California originates precisely from the insurgency. And today on the flag of the richest populous state of the USA there is an inscription "California Republic".

By joining Upper California, the United States received a much-desired outlet to the Pacific Ocean. In the future, this will mean big problems and a constant threat to Japan, Russia, China, as well as the Spanish and German overseas possessions. Great Britain will pay for its cowardice and short-sightedness by losing influence, first on the North American continent, and then around the world.

Ctrl Enter
Noticed oshЫbku Highlight text and press. Ctrl + Enter
We are
How Americans captured half of MexicoSoldiers of St. Patrick
Military Reviewin Yandex News
Military Reviewin Google News
7 comments
Information
Dear reader, to leave comments on the publication, you must to register.