Ahead of the planet

January 10 2016
86
Was the Soviet economic model competitive in the 1950s? To answer this question, consider the figures for the growth of GDP and other major macroeconomic indicators. 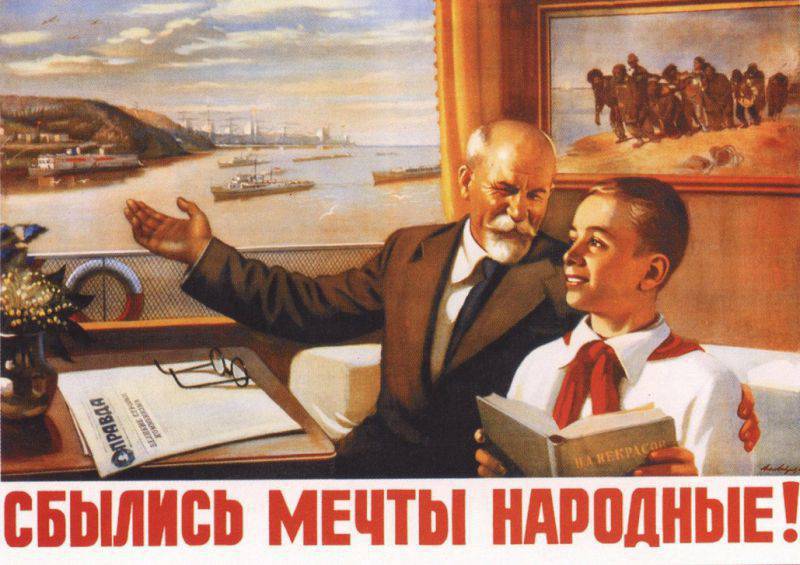 According to the dynamics of the USSR’s GDP over the entire ten-year period (1951 – 1960 years), it ranked second among the six leading countries of the world, second only to Japan. Moreover, the gap with Japan was minimal. As Grigory Khanin rightly points out, the comparison of the USSR with Japan is not entirely correct, since the Soviet Union had already completed the post-war economic recovery by the beginning of the 1950s, and Japan was only in the most active phase of such a recovery (it is believed that the recovery continued until the end of 1950's years).

During periods of post-war economic recovery, they always show high dynamics, since the countdown is conducted from low initial values ​​of economic indicators. If we take only the first half of 1950, it turns out that the USSR had the highest GDP growth rates among the six countries. Of course, this proves the advantages of the Stalinist economy, which has not yet had time to undergo any restructuring and reform. 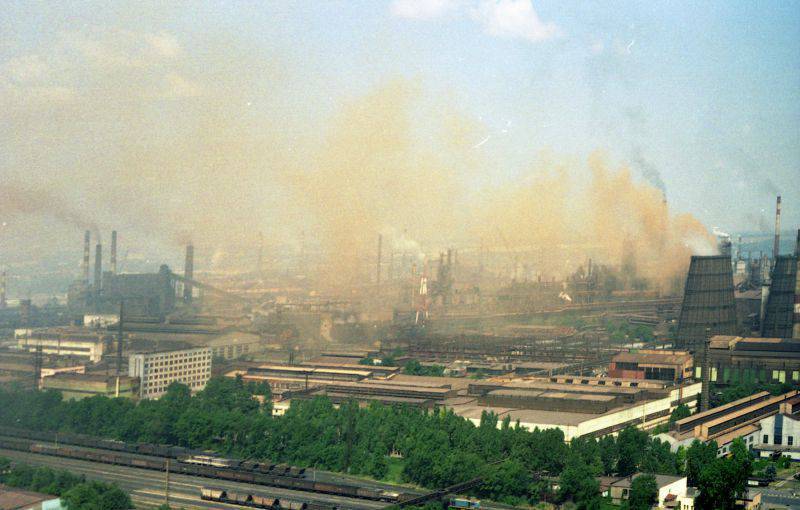 Zaporizhstal - one of the giants of the Soviet heavy industry
Special attention should be paid to the fact that such countries as the United States and Great Britain lagged behind the USSR in the greatest degree of GDP growth rates. Just those countries that declared the Cold War to the Soviet Union. The USSR did not have military parity with the United States and NATO at that time, but the gap was narrowing. Thanks to the powerful economy of the USSR, it quickly increased its defense potential.

In 1949, the first atomic bomb was tested, the US monopoly on nuclear weapons was violated. weapon. At the beginning of the 1950-s of the USSR, even earlier than the United States, created a hydrogen bomb. In the year 1953 launched the production of nuclear submarines (APL). During this period, supersonic fighters and jet bombers were created in the Soviet design offices. In the design office of Korolev in 1955, the first intercontinental ballistic missile was created.

The development of nuclear energy and space exploration were carried out at an accelerated pace. In 1954, the first nuclear power plant in Obninsk was commissioned. In 1959, the nuclear-powered icebreaker Lenin was launched. In 1957, the first artificial Earth satellite was put into orbit. In 1959, the first multi-stage space rocket was launched towards the Moon. Began preparations for the launch of man in space. All this speaks of the general growth of the economy.

According to the dynamics of industrial production of the USSR within the whole decade, among six countries was in third place - after Japan and Germany. Again, there was a strong lag behind the USSR in the industrial dynamics of countries such as the United States and Great Britain. G.I. Khanin believes that the values ​​of industry indicators for the USSR are somewhat underestimated. By virtue of secrecy, the Soviet Statistical Office did not provide data on the military industry.

And she, apparently, developed more dynamically than civil. Most likely, the USSR had a real growth rate of industrial output not lower than that of the FRG. Khanin uses some circumstantial evidence of this thesis. For example, in 1950, electricity consumption in the industry of the USSR was 210% relative to the level of Germany; in 1960, this ratio increased to 249%.

In popular literature there is such an opinion that in the 1950-ies the Soviet economy really developed dynamically, but this was achieved solely due to extensive factors. First of all, due to the involvement in the production of additional labor. So, as it was in 1930-ies, when industrialization was carried out and millions of workers came to the construction sites and cities from the countryside. However, it is not. With GDP growth of more than 100%, the number of people employed grew over the 1950s by only 22%.

Thus, thanks to the increase in labor productivity, more than 80% of GDP growth was provided, while less than half of the war was before the war. According to Khanin's calculations, among the six countries in the 1950-s, the USSR was in fourth place in terms of labor productivity growth rates in industry (although there are no data for Japan, but it is obvious that it had higher rates than the USSR). Again, if we consider that statistical data on industrial dynamics are understated (the military industry is not taken into account), it is possible that the USSR could have growth rates of labor productivity in industry not worse than in France and Germany. In any case, the USSR is clearly ahead in terms of this indicator of its main geopolitical opponents - the United States and Great Britain. Not to remember this means to downplay the professionalism of our fathers and grandfathers. 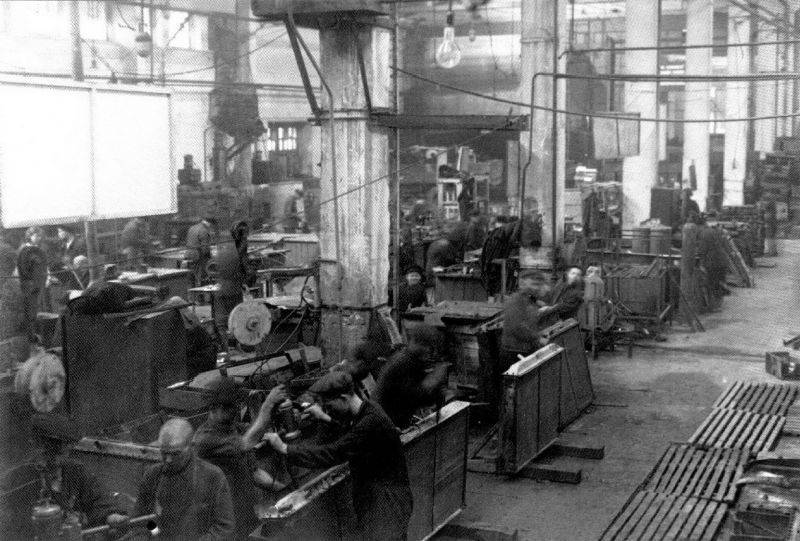 Assembly site radiators at the Ural tank factory in Nizhny Tagil
A sensitive indicator of the overall state of the economy are its finances and prices. So, the state budget of the USSR in 1950-ies had a constant excess of income over expenditure (surplus). In the 1950 year (the last year of the fifth five-year plan) budget revenues were equal to 427,8 billion rubles, and expenses - 413,2 billion rubles. Thus, the surplus amounted to 9,6 billion rubles. In 1953, these figures were respectively (in billion rubles): 539,8; 514,7; 25,1. In the year 1955: 564,2; 563,5; 0,7. And this is against the background of the fact that the budgets of the United States, Great Britain and other Western countries were in short supply.

There was a constant depreciation of the monetary units of Western countries, there was a constant inflationary rise in prices. The Soviet ruble strengthened during these years, its purchasing power grew. All this was reflected in the periodic decline in retail prices, which was unprecedented for the world economy of the twentieth century. Strictly speaking, the decline began in the previous period, which we called the “1940's period”.

Despite the fact that we lost 26,6 million people, and our allies in the amount - less than a million, the Soviet Union earlier than all canceled the cards for food - already in 1947 year. When monetary reform and cancellation of the rationing system were carried out in December of 1947, the high prices of commercial trade were canceled and unified reduced state retail prices were introduced for consumer goods.

This was the first stage of lower prices for consumer goods. The decrease in prices at the first stage led to a reduction in the cost of consumer goods from the state retail sector over the next 1948 year, by at least 57 billion rubles. This amount represented a net loss for the state budget (the main source of formation of the budget was VAT, the total volume of which directly depended on the level of retail prices). This loss should be covered, and it was really later covered by the government due to the increase in labor productivity, the rise in the production of consumer goods, and the reduction in production costs. 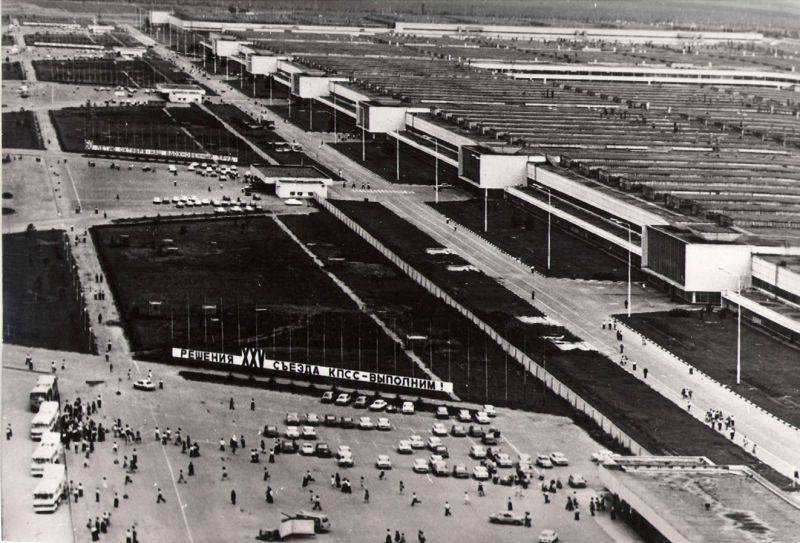 Volga Automobile Plant in Tolyatti
Consequently, the population benefited from lower prices in all retail sectors during the year, only about 86 billion rubles. This means that as a result of the decline in prices at the first stage, the purchasing power of the ruble increased significantly, the purchasing power parity of the ruble increased in relation to foreign currencies, and the real incomes of the working people seriously increased.

From 1949 to 1953, the year retail prices have gone down annually. This happened in March or April. After the fifth decline, made in 1952, the level of prices for consumer goods became 2 times lower compared to the fourth quarter of 1947.

The sixth decline was the largest. It happened on April 1, 1953, that is, after the death of Stalin. However, the main parameters of the reduction were agreed with him. It gave a direct benefit to the population in the state trade sector in the amount of 53 billion rubles per one year.

The decline in retail prices for consumer goods under Stalin is strikingly contrasted with the rise in prices for similar goods in the developed countries of the West.

Once again, we emphasize that the basis for reducing retail prices was to increase labor productivity and reduce production costs. In the sphere of production, there was a cost-effective mechanism. He formed not immediately. In the first five-year plan (1929 – 1932) there was even an increase in the cost of industrial products by 2,3%. During the years of the second five-year plan (1933 – 1937) there was a decrease of 10,3%.

In the peaceful years of the third five-year plan (1938 – 1940), it remained unchanged. In the fourth five-year plan (1946 – 1950) the cost of industrial products decreased by 17,0%. But in the fifth five-year plan (1951 – 1955) a record decrease of 23,3% was achieved. Perhaps, here lies the root of all the other successes of the USSR of the 1950-s period. In the previous five-year plans, a cost-effective mechanism of the Soviet economy was put into operation at full capacity.

Such a mechanism in the world did not yet exist.

Ctrl Enter
Noticed oshЫbku Highlight text and press. Ctrl + Enter
We are
Why there is no peace treaty with JapanRed commanders on the Alley of Mig
Military Reviewin Yandex News
Military Reviewin Google News
86 comments
Information
Dear reader, to leave comments on the publication, you must to register.