Europe slips to the verge of world politics

December 21 2015
20
Last Friday, the ambassadors of the EU countries agreed on a principled decision to extend economic sanctions against Russia for another six months - until July 31, 2016. The final decision on the sanctions will take 21 January EU Council. This procedure will be largely formal, since the leaders of leading European countries and officials from the European Commission have already spoken in favor of extending the sanctions, which the ambassadors fixed at their December 18 meeting. 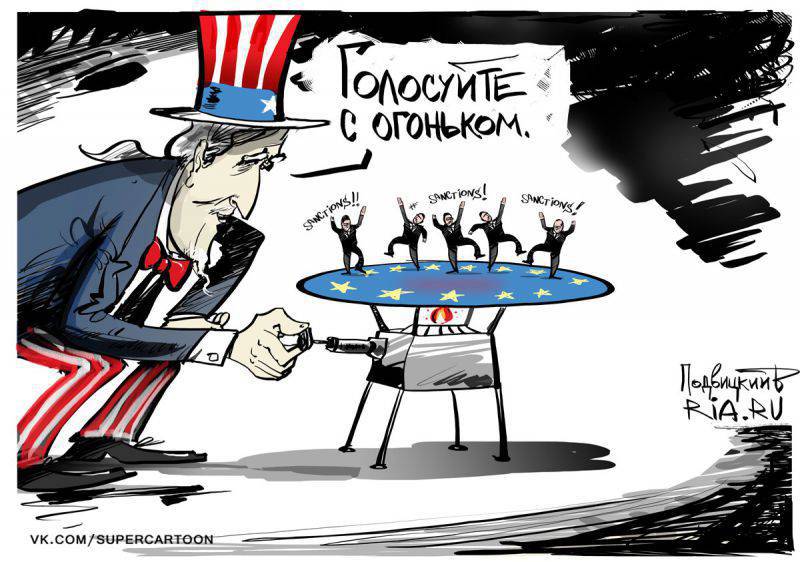 Economic Development Minister Alexei Ulyukayev called the extension of EU sanctions on Russia expected and told reporters that it will not affect the Russian economy, since it has already adapted itself to work in such a regime.

We are talking about the so-called sectoral sanctions introduced by the European Union back in 2014. Then the Europeans limited access to credit for leading Russian banks, banned from providing Russian companies with new technologies, selling high-tech equipment to the oil sector, introduced weapons embargo, including the supply of dual-use equipment, primarily electronic.

A separate decision was recorded so-called black list of persons and organizations who have closed access to the EU territory and the European banking sector. In total, this list contains over 150 people and 37 legal entities representing the military and civil structures of Russia, the LC and the DPR.

Initially, the EU sanctions, as a means of pressure on Russia for the annexation of the Crimea and the position in the Ukrainian conflict, were introduced for six months. Then they were extended regularly. The current decision was no exception. Traditionally, one or several countries (this time it was Italy) expressed their disagreement with the sanctions regime in relations with Russia, which they quietly forgot at the time of the decision.

This disagreement has exclusively economic roots. European companies in terms of sanctions bear significant losses - according to some estimates, they exceed 20 billion euros per year. A significant role is played here by Russian counter-sanctions. They are issued in the form of a food embargo on exports from countries that took part in actions against Russia. The counter sanctions caused significant damage to the agrarian sector of the European Union. In some cases, such as, for example, in the Latvian LLC DK Daugava, which produces dairy and bakery products, they led to a halt of enterprises.

Responsible European politicians are trying to influence the situation, although they understand the futility of their efforts. After all, the European Union imposed sanctions against Russia under the strongest pressure of the Americans. This was publicly acknowledged by US Vice President Joseph Biden. As reported last fall by Press TV, speaking at Harvard University, Biden said that Washington forced European countries to impose sanctions against Moscow in connection with the Ukrainian crisis. According to him, "Europe bent."

It is noteworthy that the retaliatory measures of Russia openly outraged the Americans. The office of the United States representative in the World Trade Organization (WTO) even circulated a statement in which there is such a passage: “The United States believes that the counter-sanctions of Russia harm the open market and can be used for protectionist purposes.”

Be that as it may, the food embargo against countries that supported sanctions against Russia has been adopted. It is valid. In June, when the European Union once again extended its sanctions by half a year, Vladimir Putin signed a decree “On the extension of certain special economic measures to ensure the security of the Russian Federation”. With this document, the Russian food embargo was extended immediately for a year. In other words, in the summer in Russia they realized that one should not expect a change in European policy towards our country.

"On the Fields" of World Diplomacy

There were at least two grounds for such a conclusion. First, Europe still remains under strong pressure from the United States, relations with which Russia has been upset for years. Secondly, the foreign policy of the European Union does not have today any serious vector, where it could show its influence on the solution of international problems, except for the Ukrainian one.

And in this case, the decision is taken by national leaders and their diplomacy. If at the beginning of the settlement of the Ukrainian crisis, EU High Representative for Foreign Affairs Catherine Ashton still flashed against the background of the main participants in the negotiations, then with the transition to the Norman format for diplomats from Brussels there was no place even on the accessory stool.

And the point here is not that the Italian Federica Mogherini who replaced British Ashton last November did not show the necessary initiative. It’s just that over the years of its existence, the European Union has not developed a coherent foreign policy strategy, therefore today its foreign affairs representatives are just statisticians at the most important international forums and negotiations.

It should be noted that for the year of work, EU High Representative for Foreign Affairs Federica Mogherini did not receive a full-fledged meeting with either US Secretary of State John Kerry or Russian Foreign Minister Sergey Lavrov. She asked to go to Moscow, but Lavrov confined himself to talking "on the margins" of a meeting of the Council of Ministers of Foreign Affairs of the OSCE countries, negotiations on the Iranian nuclear program in Lausanne, etc. The May meeting in Brussels did not become a subject of serious negotiations.

John Kerry, in addition to the events where the diplomacy of the world powers intersected, found an opportunity to talk with Federica Mogherini on the sidelines of the meeting of NATO foreign ministers. In such an attitude to the head of the EU foreign affairs agency there is, as they say, nothing personal. Simply, the possibilities and influence of supreme European diplomacy are limited by public rhetoric, and reality requires a concrete solution to the problems. The European Union is not ready for this, and this is why.

In today's world, successful foreign policy rests on two main forces — economic and military power. They are in national diplomacy, but poorly reflected in the united unions of states, including European. It is not easy to cross the interests of the leading states of the continent with the interests of politically and economically stagnant countries.

Take, for example, the case of Ukraine. The beneficiaries of the association with it will be the strongest EU economies that will get a new market for their products. They are presented today in the Norman format of the Minsk process to resolve the Ukrainian crisis. The other, like the shrill Baltic, will get only subsidies received from the bounty of the leaders of the union.

At the same time, decisions in the EU are made by consensus, which often contradicts the interests of those who are called the locomotives of Europe. Small countries often come up with initiatives that, if blocked, can destroy the fragile unity of the EU. This was the case with the deployment of an American missile defense system in Eastern Europe or the advancement of American troops and weapons in the same Baltic states. As in such cases they say, the tail begins to wag the dog. This gives amorphousness, and even vagueness, to the goals and policies of the European Union as a whole.

At the tail of American politics

French and German diplomacy have already encountered this. Actively involved in the settlement of the Ukrainian crisis, they suddenly felt that Kiev eventually began to ignore their recommendations and demands, and President Poroshenko, instead of Paris and Berlin, broke through the road to Brussels. Meetings here with European officials and bellicose rhetoric replaced the substantive work on the implementation of the Minsk agreements. Poroshenko found an opportunity to maneuver between the centers of European diplomacy and already openly neglect the interests of other parties to the conflict.

It is obvious that the national diplomacy of the EU countries now have a limited resource. This once again convinced Germany. In October, after the start of the operation of the Air and Space Forces of Russia in Syria, German Foreign Minister Frank-Walter Steinmeier hurried to the Middle East.

His visits to Saudi Arabia, Iran and Jordan did not affect the resolution of the Syrian crisis and the fight against Islamic terrorists. During his trip, the German minister did not bring together the positions of the Saudis and Iranians in Syria. It was expected. Such a task is difficult to solve even for heavyweights of Russia and the USA. Surprised another. Steinmeier was unable to reconcile Europeans of Middle East concern for Europeans. He called on the Gulf countries to accept part of the refugees and provide them with decent living conditions, but he did not receive any promises from the rich Gulf monarchies. So I went home.

Simultaneously with Steinmeier’s Middle Eastern trip, German Chancellor Angela Merkel visited Turkey. She promised the local leaders 3 billion euros for the resettlement of refugees, the resumption of negotiations on accession to the EU, other small and large preferences. In response, she received vague promises to discuss and study the problem. In short, the political weight of Germany today is only enough to solve the problems of bilateral relations.

So with France. This country has always had an influence on the Syrian elite, especially its Alawi clan. Today, many rich Syrian families (including Bashar’s al-Assad’s next of kin) who have taken shelter in France from national calamity are living here. However, the campaign of the ships led by the aircraft carrier Charles de Gaulle to fight Islamic terrorists, started by President Francois Hollande, did not find support from the local authorities.

"Charles de Gaulle" was quickly transferred to the Persian Gulf. There, he was already visited by US Secretary of Defense Ashton Carter. He clapped the captain of the aircraft carrier approvingly on the shoulder. Together with the French secretary of state for veteran affairs, Jean-Marc Todeschini, had a snack in a mess room. The world was a familiar picture - the Europeans, built into the tail of American politics. Such is their weight today and such is the role.

... As we see, the world does not perceive independent either the foreign policy of the European Union or the actions of its leading countries. Perhaps it is also why it is so important for Europeans to jointly speak out against Russia. They simply have no other opportunity to show their influence on the solution of international problems. And it turns out that it does not matter at all that the demonstration of this influence brings with it harm to business and citizens of the European Union.

Ctrl Enter
Noticed oshЫbku Highlight text and press. Ctrl + Enter
We are
Results of the week. “He was terribly unlucky, especially on Friday”Situational analysis of the death of the MH17 flight (Malaysian Boeing 777), made on the basis of engineering analysis from 15.08.2014
Military Reviewin Yandex News
Military Reviewin Google News
20 comments
Information
Dear reader, to leave comments on the publication, you must to register.