The Silence of Baghdad

December 9 2015
68
The goal of NATO is not terrorists, but the preservation of influence


To escape the blows of the Russian Aerospace Forces, the bandits flee from Syria to Iraq, hastily equip new positions near the city of Mosul. However, official Baghdad is trying to destroy the terrorists on its own, the Iraqi army continues to suffer significant losses. Why has the country's leadership still not asked for help from Moscow?

It must be admitted that the fight against the “Islamic State” banned in Russia in the Iraqi direction should be intensified.

Even before the start of the air antiterrorist operation, the press center of the Iraqi army Media War Cell (MWC) reported that Russia had sold a lot of Su-30МК multi-purpose heavy fighter jets to Iraq, and Mi-35M and Mi-28НE night-time helicopters were also delivered. Currently, these combat vehicles are already striking the positions of the "Islamic State", but the successes of the Iraqi pilots look more than modest.

Although the difficult situation in the country forced Iraqi Prime Minister Khaled al-Abadi to speak about the need for Russian military assistance in early October, the question hung in the air. In turn, our country did not give a definite answer, hinting that it is ready to accept such requests only in its official form.

In this difficult situation, Russia needs to increase its military presence in the Middle East. Thus, the Russian VKS group in Syria will become an even more significant counterweight to not only terrorist groups, but also to American air bases that appeared in the region at the beginning of the 90's and were strengthened in the 2000's.

After the occupation of the country by the troops of the Western coalition, the Iraqi Air Force virtually ceased to exist. Only in 2004, the US began negotiations with the puppet authorities to create new national air connections, while the American side in every way delayed (and it still does) large-scale deliveries of even used aircraft. 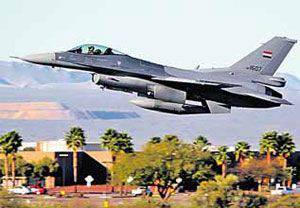 In addition, a contract was signed with South Korea for the supply of the Golden Eagle FA-50 (T-50IQ) to Iraq, which should be put into service soon. In addition to being used as light attack aircraft, the FA-50 and L-159 will be used to train pilots.

At first glance, all this looks impressive to a war-torn Iraq. However, despite the presence of relatively new aircraft, the pilots have a low level of training, which effectively reduces to zero the effectiveness of combat missions.

In addition, it cannot be ruled out that at the most unexpected moment, terrorists can either destroy Iraq Aviation on the ground (bribing guards is not a problem), or capture combat-ready vehicles, thereby significantly enhancing their potential.

Aviation and the situation: the West is nervous

It is obvious that the successes of Russian aviation, the increasing influence of the Russian Federation cause at least irritation in the West. Despite the terrorist threat, Washington and Brussels continue to pursue a policy of double standards.

So why does the West want to keep Iraq under its domination by all means? What motivates the North Atlantic Alliance to make covert political moves against Baghdad?

The first. Iraq has a favorable geographical position in the Middle East, that is, it controls not only the airspace in the very center of the region, but also access to the Persian Gulf near neighboring Kuwait.

The second. Rich oil fields make Iraq an important energy player. According to official Baghdad, the country's “black gold” reserves exceed 143 billion barrels. It is clear that the West does not want to give up such a profitable “piece” into the wrong hands.

Third. Recently, contacts between Russia and Iraq have become more frequent, all this raises the fear of the NATO command to lose influence in the Middle East.

In addition, the territory of Iraq is a kind of reserve base for replenishing the battered terrorist formations, there are many underground tunnels and bunkers in the country that only our aircraft can destroy. It is clear that the delay in asking for military assistance will result in sad consequences not only for Iraq itself, but also for the entire world community. "Unruly forest grows." Of course, for our country, the Iraqi operation will become more costly than the Syrian one, but there seems to be no other way out.

Another significant point: after the Paris attacks, the West began a real fight against the militants (the air forces of Great Britain and France attack terrorists not only in northern Iraq, but also in the Syrian city of Rakka, the unofficial capital of ISIL). In doing so, NATO countries are seeking to challenge Russia with the fruits of its future victory.

The Iraqi leadership needs to make the only right decision - to turn to Russia as soon as possible for help. Our aviation is ready to act in the Iraqi direction, especially since the pilots have already gained solid combat experience.

Ctrl Enter
Noticed oshЫbku Highlight text and press. Ctrl + Enter
We are
Shiite Iran and Sunni Turkey in the struggle for MosulInterview by President Bashar Al-Assad to the Sunday Times
Military Reviewin Yandex News
Military Reviewin Google News
68 comments
Information
Dear reader, to leave comments on the publication, you must sign in.