December 14 2015
9
Any fortification is interesting and instructive in its own way. After all, why did people build them? To protect yourself from enemy attacks, sit behind the high and thick walls and ... after the disgrace of the enemies to continue a peaceful life. As a rule, fortresses clearly demonstrate the ingenuity of our ancestors and their resourcefulness. Many of them were built on a peninsula, surrounded on three sides by water, others - on the contrary, on such high cliffs, that if you look up - the cap falls off. Well, where there was a flat land, ingenuity was replaced by art and the hard work of stonecutters and bricklayers, who built truly remarkable structures. By the way, sometimes they helped not only to defend their lands, but also served as outposts of foreign expansion. 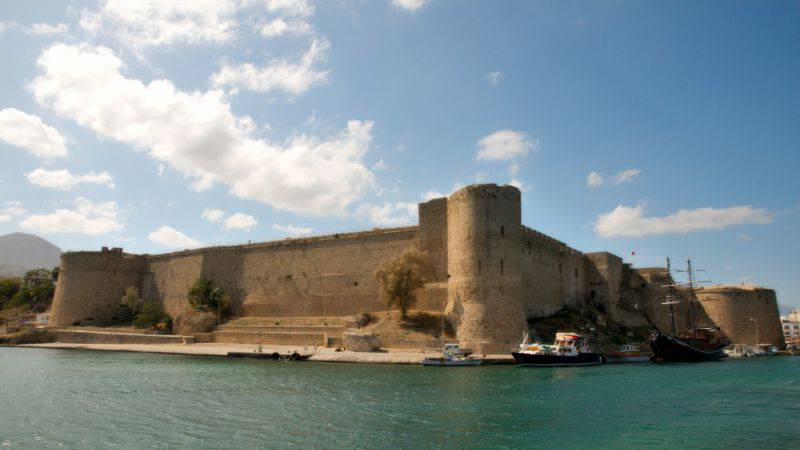 Venetian fortress of the city of Kyrenia, northern Cyprus. View from the sea.

Take for example the island of Cyprus with its thousands of years of rich history. The wealth of its subsoil has always attracted both merchants and conquerors, as well as its strategic position at the crossroads of routes from Europe to Asia. No wonder there are still the British military bases, and by law they will be there forever, for such was the condition for granting Cyprus independence. So it remains to be seen whether the military bases of Russia will appear in Cyprus, but the British bases have been there and will always be. By the way, they look very peaceful. Behind the barbed wire you can see cozy houses, tennis courts, “mail” - everything is as if nothing military was there. Well, there are visible here and there white hemispheres of radar, whole forests of vertical whip antennas and ... everything! 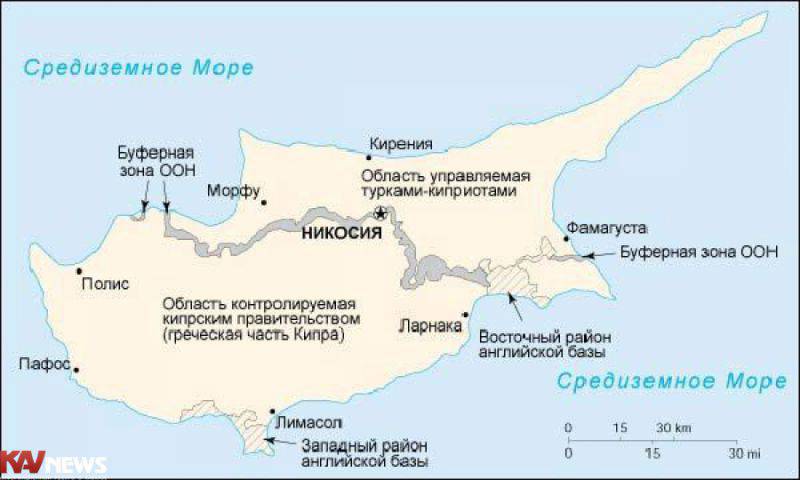 Map of Cyprus with the UN area of ​​responsibility and British military bases.

However, there are many old fortresses in Cyprus. And they are located both on its south side (a small amusing fortress is located right on the embankment of the city of Larnaca, there is a stage and historical performances are held, the benefit of the surroundings allows!), And on the north. This part of the island was annexed by Turkey in 1974, and now the Turkish Republic of Northern Cyprus is located there, which is recognized only by Turkey itself. Well, and since relations with Turkey today have deteriorated seriously and for a long time, it may very well be that our tourists will get there much more difficult than before, although there used to be no particular difficulties with this. Get on the bus and go! And to see this “edge” is very interesting. Well, firstly, when you arrive there, you immediately see that reference books, which say that this is the most militarized state in the world, do not lie: here and there the wire, then there and here the Turkish soldiers with machine guns, behind the wire are Turkish BTR M113 with uncovered machine guns and literally, wherever you look, posters - “No photos! No cameras! "And in addition, they also warn you:" Take away the cameras! Turks will enter - they will see, they will be taken away! ”Here the shooting range of snipers, here is the base of Turkish special forces ... You go and you get a camera, then you will cover it immediately!

As for Kyrenia (Girne), it is rightfully considered the most picturesque city in the eastern Mediterranean. It was founded in the 10th century BC. still Phoenicians, and received his name in honor of the goddess Aphrodite the Brilliant - "Kyrenians". The Kyrenian temple was built in her honor in the city, but despite this, he did not play a special role in the ancient history of the island. Under the Romans, a trade harbor was built here, and under the Byzantine emperors - a fortress. And so she got the name of the Kyrenia fortress, which still exists today. In V - VII centuries. many neighboring cities were destroyed by the Arabs, but Kerenia survived and ... attracted the attention of the British!

In 1191, its storming from land and from the sea was taken by the troops of the victorious English king Richard the Lionheart. Well, when the power of kings from the Louisiana dynasty was established in Cyprus, work began to strengthen it, as a result of which it became almost impregnable. Prisoners were also held there and the Knights of the Knights Templar were executed. During the war for power on the island, which occurred in the first third of the 15th century, Queen Charlotte lasted here for almost four years, besieged by the troops of her illegitimate brother James. Then he did not even try to storm the fortress, but decided to take it into oblivion. And the siege ended only when the cook of the queen began to feed her omelet from pigeon eggs. It was then that she no longer sustained herself and fled to the island of Rhodes, well, and the fortress garrison, of course, immediately surrendered. After perestroika, it was never taken by storm until it surrendered to the Turks in 1570, without a fight.

Cyprus gold bezant XIII century. made in the western style.

When Cyprus became part of the Venetian Republic, the Venetians strengthened it even more (although it would seem so much more ?!), and installed powerful artillery on its walls. Venetian architect Savorniani watched the work, and we can thank him today that despite the heat in the deep casemates of the fortress it is cool - this is the thickness he erected here the walls. At the same time, a long pier was attached to the fortress, making it difficult for the landing directly on the walls of the fortress.

Well, now let's take a short excursion to the fortress and take a good look at everything there. The entrance to it is on the northwestern side and a stone bridge over the moat leads to it. This ditch, covering the entire fortress along the perimeter, was filled with water until the XIV century, and today it is the highway encircling it. 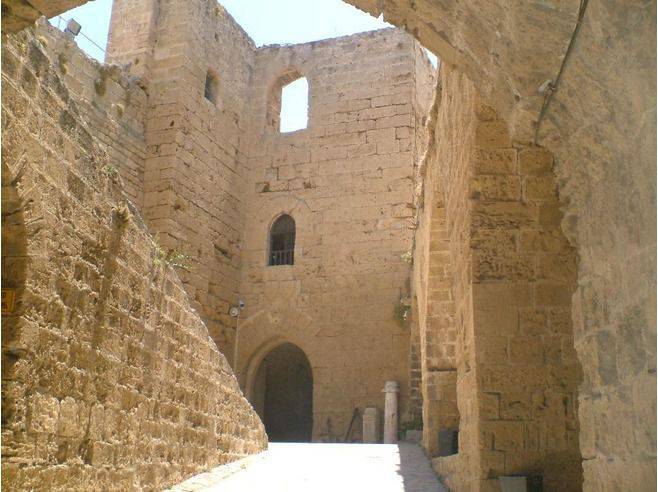 Once in the fortress, you will see another gate in front of you, and under the arches on the right there will be a lot of various souvenir shops. Note the wide ramp on the left. Of course, you can climb the walls along the stairs, but the ramps allowed heavy guns to roll in there freely and, moreover, soldiers could quickly climb them. 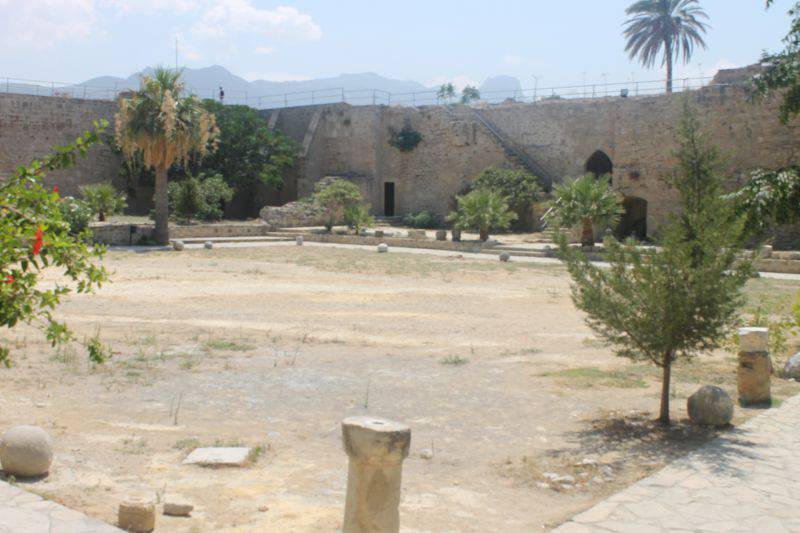 The courtyard of the fortress is a flat platform bordered by palm trees, bushes and ... marble cores for cannons. To cross it at noon is a test for the Stoics, so there everything is heated by the sun.

In the far left corner of the fortress courtyard is the entrance to the Lusignan Tower - a very unusual place that must be visited by lovers of military history. And it is unusual in that it allows to see the whole tower from the inside, because a wide light well passes from top to bottom through it! Standing on its bottom, you will see a building above your head above a modern five-story building, with numerous casemates in the thickness of the walls. The walls in the tower are just incredible thickness, and you can only imagine what long V-shaped loopholes for the guns in the thickness of the walls are made for them. Here in the rooms sealed with glass, mannequins of soldiers of different times are displayed. Here and a scene with the distribution of salaries to Byzantine soldiers, and the scene of maintenance tools. It must be said that the dummies could have been better picked up, that is, all these “dioramas” are performed according to the principle “for tourists and it will come down so much!” Shooting through the glass without a flash is dark and uncomfortable with a flash. But here it is cool. Here in the dungeon there are figures that demonstrate how in the Middle Ages tortured prisoners (mannequins make-believe everything that happened), but to be honest, looking at “this” is not terrible, but ridiculous! 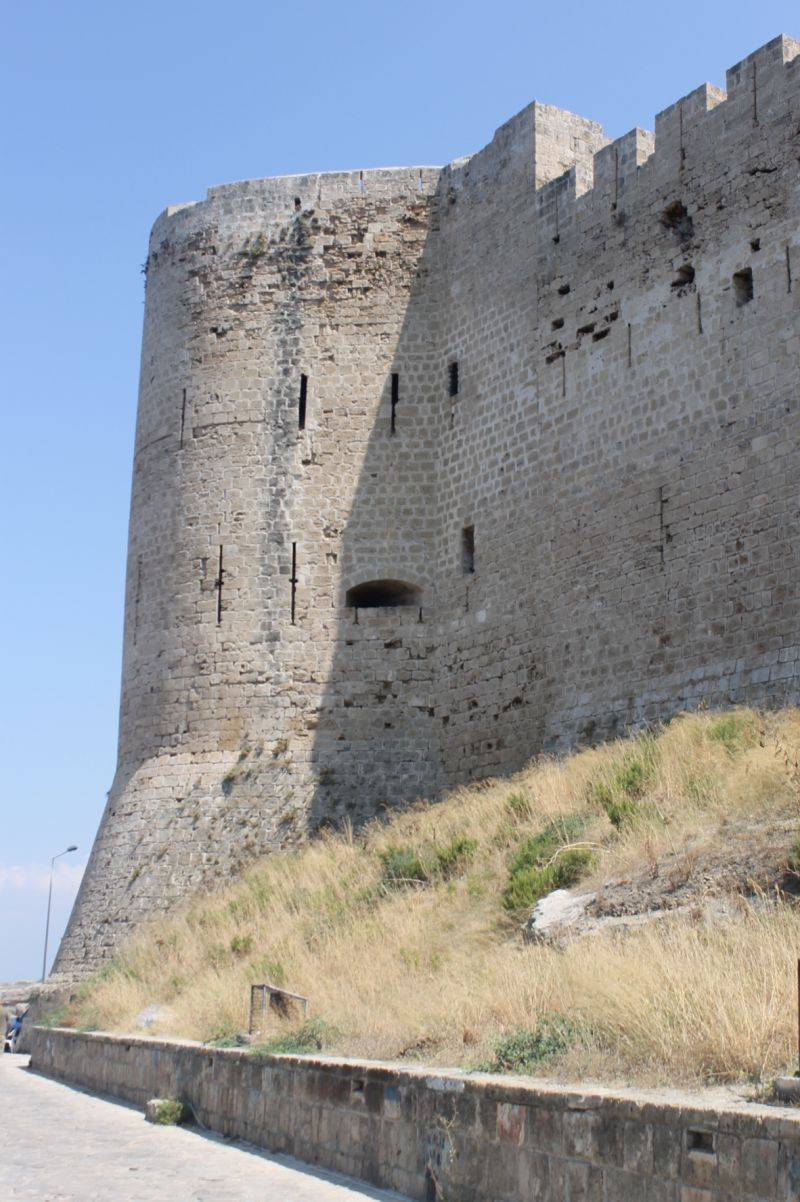 The walls and towers of the fortress look like this from the outside, and it is not surprising that not a single person in their right mind decided to take them by attack, and did not climb the stairs to them. 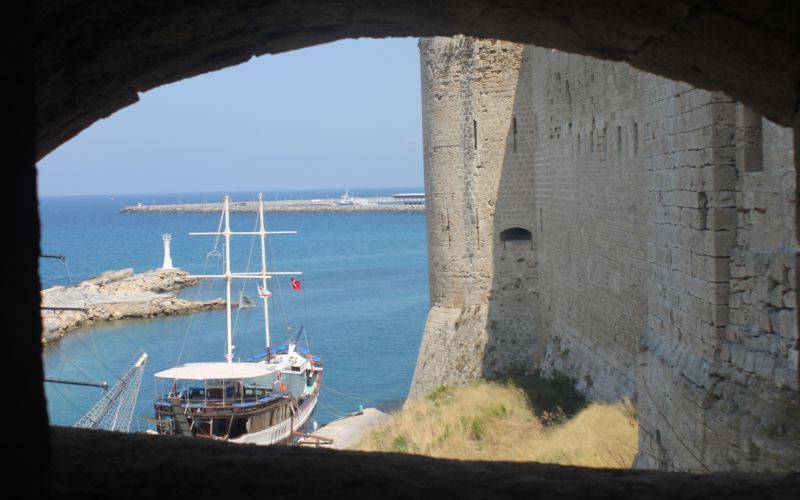 View of the approaches to the fortress through an embrasure of artillery. That is, everything was arranged to shoot through them with flanking fire. 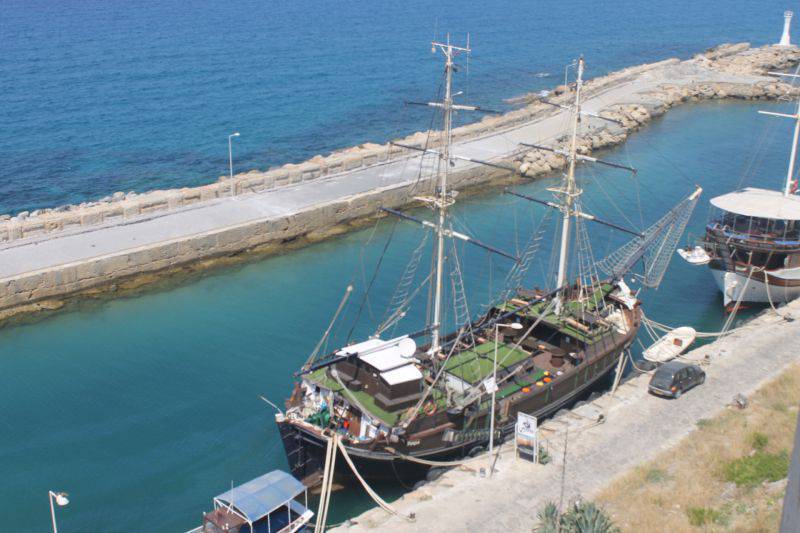 A pier that protects the approaches to the fortress from the sea. Below you can see the tourist ship, which regularly takes tourists to the sea on a kebab! 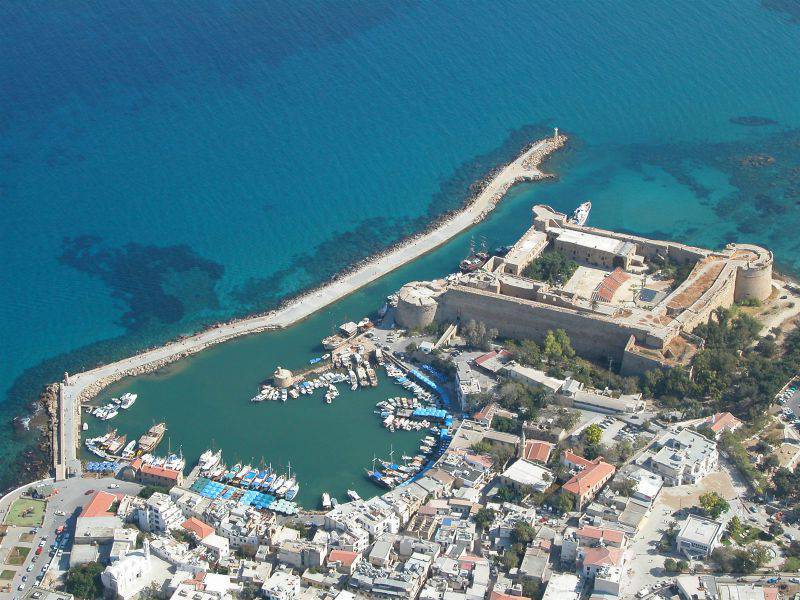 View of the port of Kyrenia and the fortress from a bird's eye view. The amphitheater arranged in her yard and the Lusignan tower (top right) are clearly visible. Look carefully, and you will see in its roof the opening of the light well, which was discussed, and also how thick the wall is. 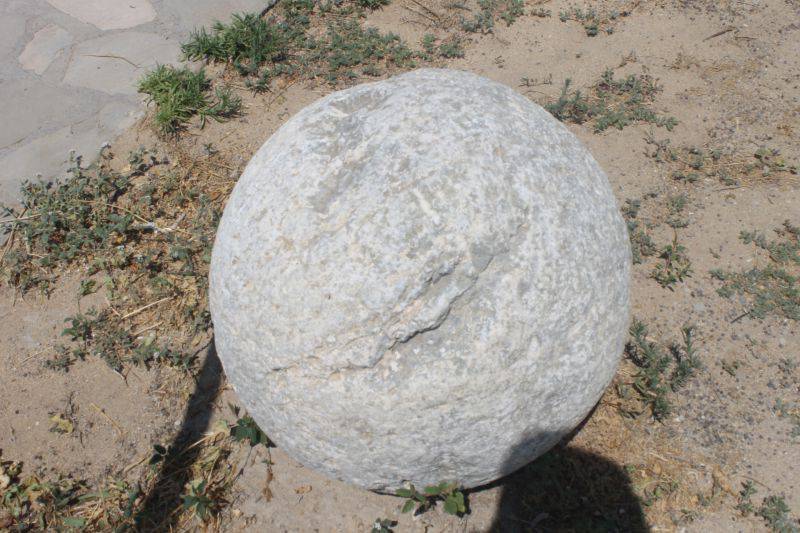 Well, the enemies tried to break through the walls of the fortress more than once, and its defenders repeatedly fired cannons at the invaders and ... these were the kind of cores they used. 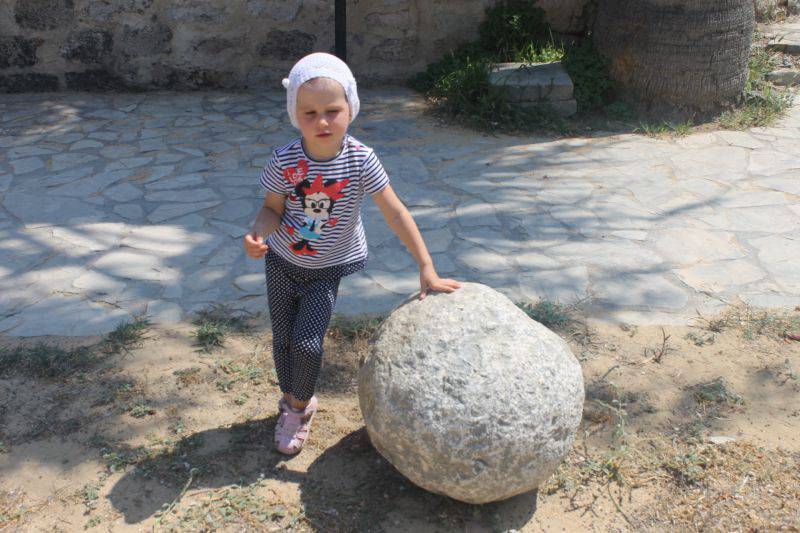 There was nothing to measure the diameter of this stone core, but ... here is a “large-scale child” with a height, as his mother said, exactly 90 cm. 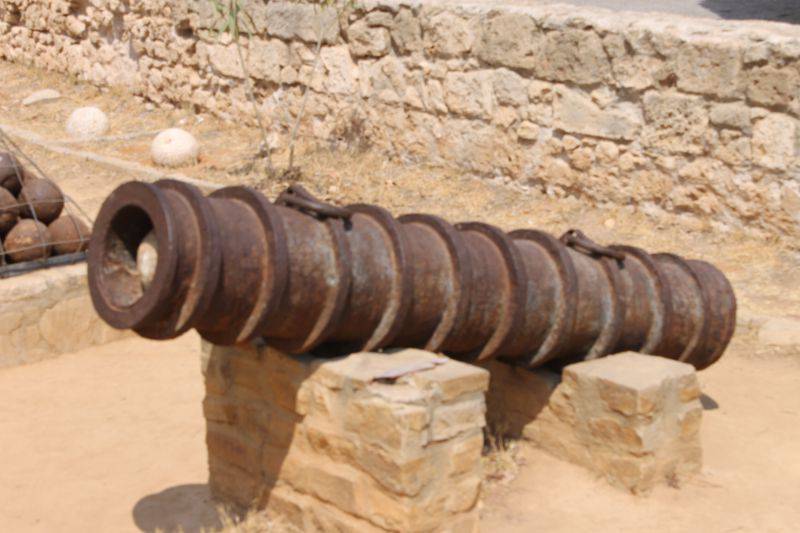 Well, this is a wrought iron gun of small caliber, preserved to our time ... 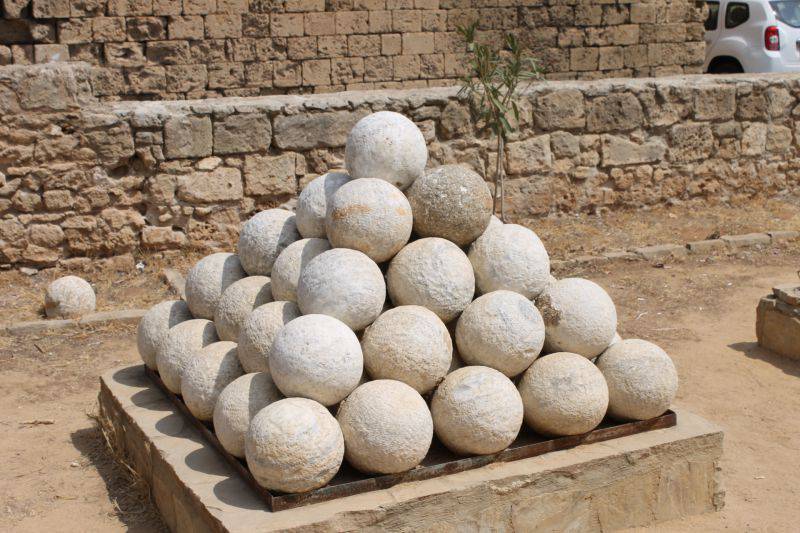 And the kernel to it!

1200 sword of the year from the Municipal Museum in Nicosia.

Well, in conclusion, I would like to wish those who somehow find themselves again in this interesting place to linger longer in it, and still have a portable quadcopter with a camera with them to take pictures of both the fortress and the port from a bird's-eye view. After all, there are so many interesting things!