Bullets of the nineteenth century: only ideas

December 10 2015
36
As is well known, the main detail in the small arms weapons is a cartridge. This opinion is shared by many specialist gunsmiths, and it is not for nothing that very often, before constructing a new weapon, a cartridge is created for it, and a bullet for the cartridge. Note that the simplest - ball bullets made of lead, copper and even silver people successfully killed each other for more than 300 years, before in 1832 an English-captain-cone bullet with a recess in the bottom part was proposed by the English captain John Norton. 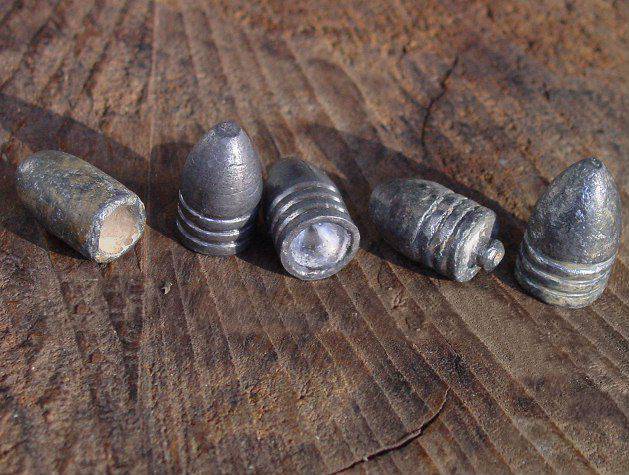 Minier bullet on the left and compression bullets on the right.

In 1849, Claude Migne proposed a lead bullet with an iron cup, well pressed into the rifling of the barrel, and became very popular. However, it later turned out that it was possible to do without a cup, since the powder gases themselves “bulge” the bullet well when fired. And then the bullet was simplified even more, turning it into a simple pointed cylinder (“compression bullet”) with a length of at least 2's gauges, which, as it turned out, shrinks and fills rifling well without any indentations. 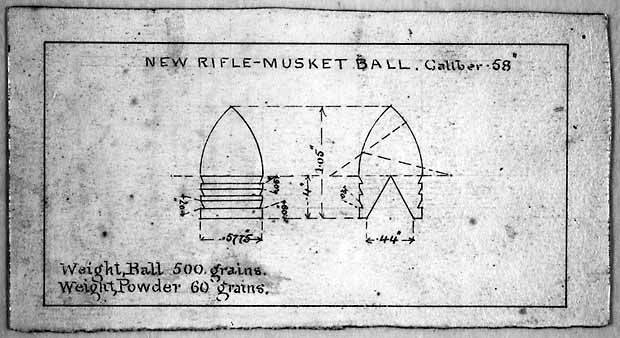 However, the idea of ​​a bullet with a hollow in the bottom part did not die at all. In 1848, Walter Hunt, an inventor from New York, received a patent for a magazine rifle with a tubular magazine, which was controlled by two levers. She fired bezgilzovym ammunition in which the powder charge was contained inside a bullet that had a cavity inside. The construction of Hunt was inoperable, and it was improved in the well-known (and already significantly more efficient) Volcanic pistol, whose 10-mm lead bullets had a recess in the bottom part with a charge of explosive mercury. But neither the pistol of this design, nor the rifle found much success.

Nevertheless, the idea of ​​a cartridgeless cartridge with a charge in the bullet itself was by no means dead and every now and then reanimated. It turned out, however, that with considerable length, it has poor ballistic characteristics. That is the easiest and most obvious way - to place a propellant charge in the pool itself, turned out to be a dead end. 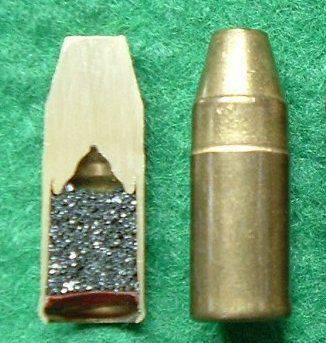 Bezgilzovy cartridge causing the most complaints.

But specialists are not too happy with the design of the German cartridge with a bullet inside a bar of pressed powder. After all, it is obvious that the metal protective jacket of the liner was invented in order to preserve its contents from both climatic, mechanical and temperature effects, when, for example, the cartridge gets into the hot-chamber of the firing chamber. That is, the "powder shirt" for a bullet is also not an option! Then what?

The caseless German cartridge caliber 4,7 × 33 mm in disassembled form. The bullet is completely immersed in powder charge and sealed with a white plastic stopper.

The solution and only a partial and rather “narrow” may lie somewhat in a different plane, namely, the plane of synthesis of a number of drawbacks and the very specific merits of the latest developments in this field. What exactly are we talking about? But what about: it is known that the Italian designers of the company CompBullet have found a way to increase the accuracy, accuracy of fire and at the same time reduce the recoil of the weapon due to the bullets of the original design with "ventilation" channels in the body.

And they did the following: they drilled one channel along the axial line from the base, in addition to it several side channels going to the side of the axial line. According to the creators of this bullet, it gives a number of positive effects. First: part of the hot gases when fired moves along the axial channel and diverges on the side. At the same time, they burst out to the sides and create a gas layer between the bullet and the barrel, which reduces the friction force of the bullet against the barrel bore. 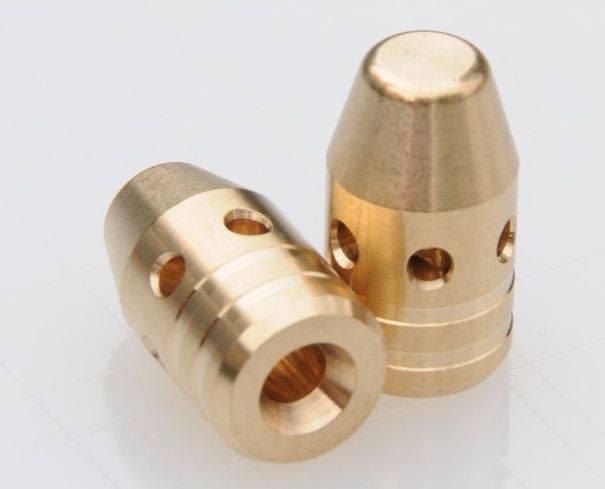 After the bullet leaves the barrel, the remnants of hot gases still continue to move inside the holes for some time, and the bullet begins to work like a muzzle brake, compensating for recoil and stabilizing its position. Therefore, these bullets were called “compensatory bullets”. Then the gases escaping from the holes during the flight create, albeit small, but still having a reactive effect, which increases the speed of the bullet.

According to the company, this design reduces the visibility of the flash when fired and reduces the firing volume. There is one more effect from such bullets: their weight is less than usual, which makes it possible to increase their ammunition. Of course, many effects manifest themselves in it “slightly” and “barely”, but, nevertheless, they manifest themselves, which makes such bullets all the same at least a little better than usual ones. Bullets produce different calibers and types - 9-mm; .45 Winchester Magnum; .308 Winchester 7,62 mm, etc. 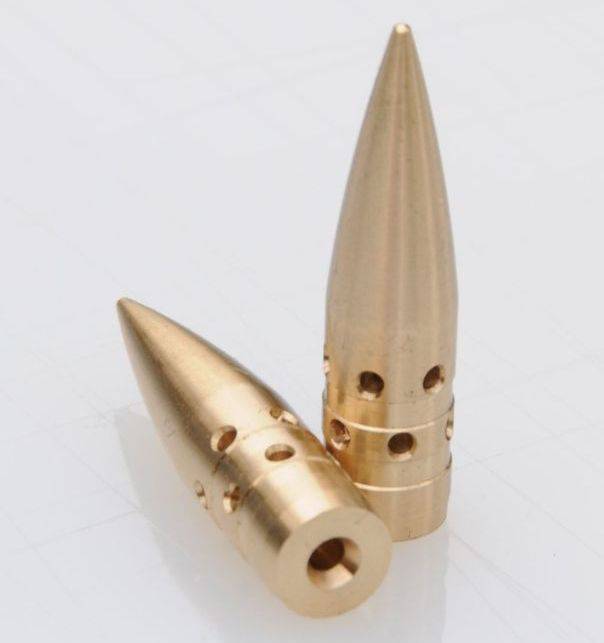 Well, now let's see what these innovations can give if we combine them with a number of new proposals based on the principle “everything new is well forgotten old”. First, look closely at the 1 drawing.

On it you see a flat bullet in the form of a bar with a sharply pointed tip, that is, in essence, a “flying blade”. It is clear that such a bullet will have exceptional destructive power, moreover, it is very convenient for use in weapons. The flat bore of the barrel, and even without rifling, is much easier to make than the round one; it can be made stamped and the barrel can be disassembled into two parts, that is, it is still easy to clean. Unusual caliber, double: width 20 or 30-mm with thickness 4,5-mm. In a flat shop, designed for 30 9-mm cartridges, such ammunition fit 60! That is, this is ammunition for submachine guns and ... only! In the gun, they will not be very convenient due to the thickness of the handle, and they are not suitable for the machine gun because of the need for accurate shooting at 500-600 m, which such a bullet most likely will not provide. But at short distances, at which the submachine gun just shoots, this indicator (at least in theory!) Should be quite satisfactory. Due to ... being in the pool flywheel!

Let's look again. The bullet in figure 1 is a sleeveless one, that is, its walls shield the powder charge from the heated walls of the chamber. However, it may have a sleeve, there is no difference in its action, just the last version is more traditional. In both cases, the bullet consists of two forged halves and a flywheel with blades inside them, as in a turbine. They are connected by spot welding, inside is placed a warhead with two burning capsules and that's it!

And then, when the shot and the fun begins. The pressure of the gases tightly presses the bullet into the channel and causes it to start moving. At the same time, hot gases get into the left and right channels, having openings on the sides. While the bullet in the barrel works like a “gas lubricant” (as the Italians at least claim!), The bullet barely pops out of the barrel and the holes open as the gases start to bleed out of them. The amount of movement in this case is the same, that to the left, that to the right. But the gases flow through the right channel freely, but on the left, their flow washes the wheel of the flywheel and makes it rotate with great speed. The gyro effect works, and since it spins up in the horizontal plane, the plane of the barrel, the bullet also flies in the same plane. How far? This is theoretically hardly possible to calculate, but ... for a submachine gun, however, should be quite enough! Of course, for a state to have ammunition only for a submachine gun is an obvious overkill. But if we, like in the West, have many small arms firms and private security companies, then ... who knows if this construction would not be useful to them? After all, almost any submachine gun can be remade for such an ammunition. It is enough to put a new barrel, magazine, bolt and a new receiver.

Well, and, of course, it is worthwhile to say about the psychological impact of such a weapon on a person, if the very same guard of order sends such a barrel at him, firing bullets that cut a person like a guillotine.

And now another thought: how to increase the caliber, well, let's say, a police pistol, and even avoid the increase in recoil and make sure that its bullets do not ricoche the obstacle? The last is the simplest. Friedrich Engels wrote about this, however, with reference to armor-piercing shells of naval guns. He suggested not to sharpen them! So that they strike the edge of the sloping armor! And experience has shown that yes, indeed, such “stupid shells” are by themselves capable of “turning” on the target. But with dumb bullets there is a problem. They climb badly in the chamber. The percentage of delays with them is higher. And a large caliber ... Of course, in the nineteenth century the caliber of an 17,5-mm pistol was considered normal, but a modern pistol of such a caliber is unthinkable at all. And nevertheless ... what if you cut the bullet in half, unfold the halves by 180 degrees, and then turn it into a ring? Then it will hit any inclined surface with its sharp edge and tighten on it! At the same time, its caliber can reach both 12,7 and 14,5-mm, because its weight will increase slightly, since it will itself represent in flight a rapidly rotating ring with an axial channel inside, which, by the way, also stabilizes the flight of a bullet! 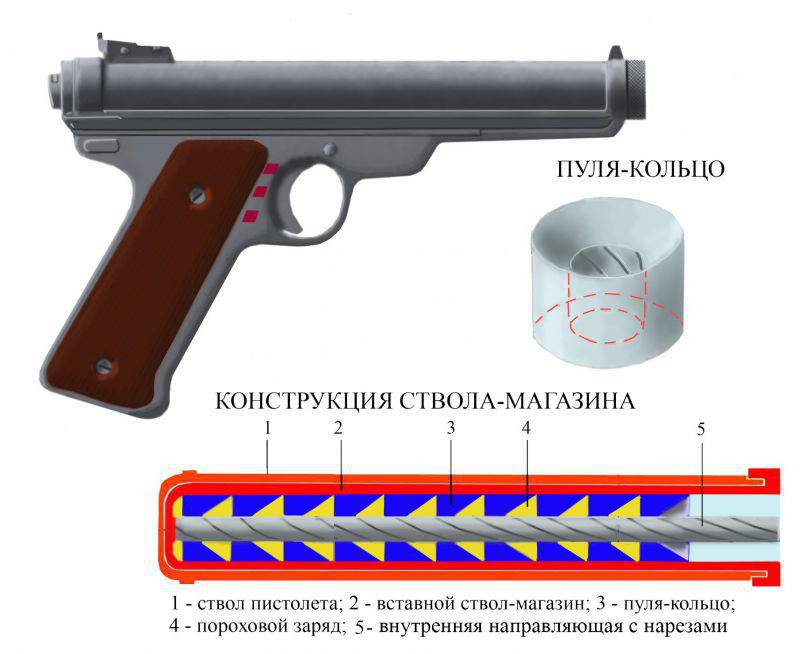 Fig. 2. 10 is a large-caliber charging pistol for police.

Let's look at pic. 2. The device of such a gun on it is shown quite clearly. The barrel is both a chamber and a store, electronic ignition. Powder charges, as in the medieval Espinol, are located between the bullets, the shape of which is such that it eliminates the breakthrough of gases to subsequent charges. The central stem of the magazine is rifled. It is clear, again, that the speed of departure of the first and last bullets will differ due to the different lengths of their run in the barrel, but this difference can be minimized by dosing charges with automatic capping of replaceable barrels. And then it is not necessary to make such a 10 pistol charging. Even 5-7 charges will be enough to stop any criminal, as soon as he thinks about what kind of "hole" such a gun will make in him with this bullet! In addition, they can easily perforate any tires, which is of fundamental importance for the police.

Ctrl Enter
Noticed a mistake Highlight text and press. Ctrl + Enter
We are
The main patron of the cold war7,62 mm rifle and machine gun cartridges
36 comments
Information
Dear reader, to leave comments on the publication, you must to register.