December 4 2015
74
R.T. Erdogan and his family are involved in the system of illegal oil supplies from Syrian fields, said Russian Deputy Defense Minister Anatoly Antonov at a briefing. However, the Turkish president does not admit his guilt even if his face is smeared with thieves' oil, Antonov said. 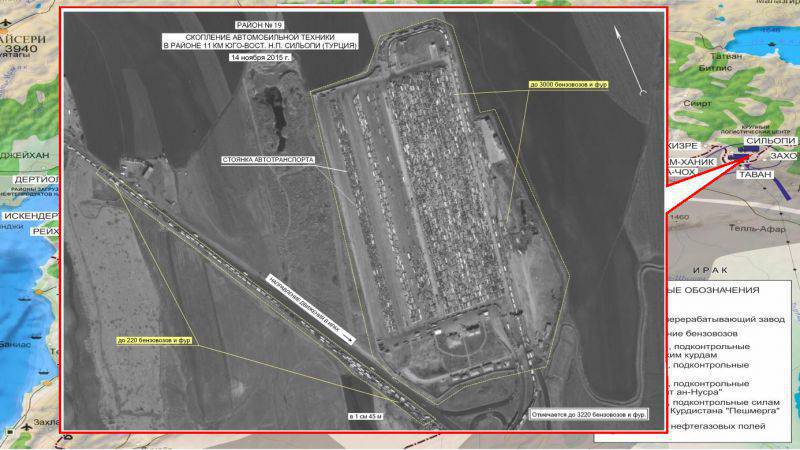 Turkish President R. T. Erdogan does not admit his guilt, even if his face is smeared with thieving oil, said at a briefing on the theme “The Armed Forces of the Russian Federation in the fight against international terrorism. New data "Deputy Minister of Defense Anatoly Antonov, transmits RIA News".

According to the deputy minister, R. T. Erdogan and his family are involved in illegal oil supplies from Syrian fields seized by the terrorists of the Islamic State.

“We know the price according to Erdogan. He was once caught in a lie by Turkish journalists who revealed Turkey’s supplies to the militants. weapons under the guise of humanitarian aid. For this, they planted journalists. The leaders, in particular, Mr Erdogan, will not resign even if their faces are smeared with thieves' oil, ”the agency quotes Antonov as saying.

“The cynicism of the Turkish leadership is limitless,” says Antonov. - See what they are doing ?! They climbed into a foreign country, shamelessly robbed her. And if the owners interfere, then they must be eliminated. ”

"We will continue to provide the facts of Turkey’ s plunder of its neighbors, "said Antonov.

Further, he told some details about Erdogan’s family business: “Perhaps I will be too direct, but the control over this thieving business can be trusted only to the closest people. No one in the West, interestingly, raises the question that the son of the Turkish President is the head of one of the largest energy companies, and the son-in-law is appointed energy minister? What a brilliant family business! .. ”

In general, let us add, the oil “business project” of Bilal, the son of Erdogan, is “oil export” from nearby territories, which were seized from the Syrian people and from the “butcher and killer” Assad (R.T. Erdogan’s expression ) terrorists from the "IG". An enterprising Bilal, covertly hidden by not less enterprising father Recep Tayyip, "cooperates" with these bearded men.

In the major media, it is easy to find pictures of smiling Bilal, starring with the militants of "IG". Type in the corresponding request in “Google” and admire a small collection gathered by journalists (including Turkish ones, who value real freedom of speech). In the Russian media, photos can be viewed, for example, on the website of the channel LifeNews. Here Bilal appears in all its glory, surrounded by bearded "warlords".

Even last year, Turkish journalists were interested in why Bilal’s ships were in Syria. Of course, they received no answer.

In general, Bilal Erdogan owns not just ships, but several shipping companies. In the press, you can find information that the president’s son has signed a contract to transport oil purchased from the militants to Asian markets. In shipping companies Bilal, notes "Russian newspaper", in the ports of Beirut and Ceyhan there are moorings, where the smuggled oil is delivered by tankers.

This information is confirmed from other sources, Western.

The publication on the site states that the name of the “main culprit” of the regional crisis in the Middle East - Bilal Erdogan, the son of Turkish President Recep Erdogan - is increasingly appearing in the press. It is he who provokes the demand for oil of the "Islamic State". On the website this product is called "terrorist oil".

Bilal Necmettin (Necmettin Bilal) Erdogan was born on April 23 of the year 1980. He is the third child of Recep Tayyip Erdogan.

After graduating from high school in 1999, Bilal moved to the USA for higher education. He received a master’s degree from the Harvard University School of Government. John F. Kennedy in 2004, then worked for a short time as an intern at the World Bank. In 2006, he returned to Turkey and began a business career. Today Bilal Erdogan is one of the three equal shareholders of the maritime transport corporation BMZ Group Denizcilik.

Experts believe that there is growing evidence of the proximity of the "Islamic State" in Iraq and Syria to the family of Recep Tayyip Erdogan. Erdogan’s aspirations for neo-Ottomanism and his family’s contacts with terrorists threaten not only to destroy Turkey, but also to wreak havoc throughout the Middle East. In October, 2014, US Vice President Joe Biden, bluntly stated at a speech at Harvard University that the Erdogan regime supported IG. Support is expressed in "hundreds of millions of dollars and thousands of tons of weapons." True, Mr. Biden later apologized, and it is clear that the apologies were made in order that the Americans could get permission to use the Incirlik airbase in Turkey. So says analyst F. Engdal.

"IG" and their oil trading have a surprisingly long time, experts say. Washington, Saudi Arabia and Qatar are trying to fight the militants, but they have little to do. The reason is the huge scale of support for terrorists Erdogan and A. Davutoglu, who imagines himself to be the agents of the ideas of neo-Ottomanism.

Oil trading from IG to Zero Hedge is called with irony “a good family business.” The cheap sale of smuggled oil to the Erdogan family is the main source of money for IG. The son of Erdogan, in turn, sells oil further.

Bilal Erdogan, the owner of several shipping companies, allegedly signed contracts with European operating companies selling contraband oil (primarily Iraqi) to markets in different Asian countries. Bilal offshore companies will use their own special berths in Beirut and Ceyhan, and from there crude oil will be transported by tanker to Japan.

Gürsel Tekin, vice president of the Turkish Republican Peoples' Party (Turkish Republican Party), recently told the local press that “President Erdogan claims that there are no legal violations regarding Bilal’s illegal activities under international transport conventions; his son is doing business with registered Japanese companies. ” In fact, Bilal Erdogan, Tekin notes, "is an accomplice of the terrorists, and as long as his father occupies a high position, he will be covered from any prosecution." Moreover, Tekin said that Bilal’s maritime companies are a real “family business, as close relatives of President Erdogan have shares in BMZ, and they are insolently turning public funds and illegally taking loans from Turkish banks.”

“The Turkish president’s conversation with his son leaked to the network“ miraculously ”, the Russian channel reports "Vesti". - Discussed far from the weather. Inquisitive journalists revealed the scheme. It turned out that oil comes to Turkey by caravans (our VKS had been bombed them not so long ago), in Turkey it already goes by local transport to the ports, well, and from there it ships to European tankers going to Japan. ”

In addition, the presidential family receives revenues from the sale of Syrian values ​​and illegal arms traffic. In the scheme, remind "Vesti", everyone participates: father, two sons, Ahmet Burak (engaged in gold) and Bilal, uncle of the president Mustafa, daughter with son-in-law.

“Today, Turkey is a close ally of the United States, and therefore it has the unofficial right to do anything,” said Marcus Papadopoulos, editor-in-chief of the British magazine Politics First, quoting the channel. - With the support of America. If we talk about internal problems, then human rights have always been grossly violated in the country. Every Turkish government has always harassed journalists who conducted independent investigations, because they wrote about corruption, about how human rights are violated. Journalists are arrested, imprisoned, tortured, many are even killed. If you look at foreign policy, Turkey has always been a source of instability in the region. ”

Political scientist and Syrian public figure Ali Salim Assad, whose words are "Russian newspaper", believes that the terrorists of "IG" repeatedly hid from the Syrian army and the Russian Aerospace Forces on Turkish territory - they were let in by border guards.

Political analyst Vladimir Evseev says that Ankara is cooperating with IG for the sake of oil revenues and the fight against the Kurds. Officially, Turkey supports the antiterrorist coalition.

Defense Minister Sergei Shoigu previously noted that the terrorists of the IG, whose positions are in Syria, are losing half a million dollars every day because of the air operation of the Russian Aerospace Forces. Discontinued supply to the black market 60 thousand tons of oil per day, said channel LifeNews.

And therefore, we add in conclusion, the attack by the Turkish Air Force of the Russian Su-24 aircraft, which allegedly found itself in Turkish airspace and received all the necessary warnings, is not surprising. The family of Erdogan, in whose oil and logistics business one of the key roles is played by his son Bilal, due to the actions of the Russian Aerospace Forces misses big potential profits. The United States, however, seems to be well aware of the commercial affairs of the Turkish family, keep quiet because at this stage they have similar goals - the overthrow of B. Assad in Syria.

Understanding this, the cunning Erdogan is not in a hurry to “strengthen” the Turkish-Syrian border, which he was advised the other day by the Americans, whom the free movement of the militants of the “IG” to and fro became bored. About the dissatisfaction of Washington wrote recently "The Wall Street Journal". According to US officials, the Obama administration insists on Turkey deploying additional troops along the border with Syria to close the 60-mile segment of the border. Just this site is used by the militants of the "Islamic State".

However, things are still there. "Thieves business" Turkish family continues.

Observed and commented on Oleg Chuvakin
- especially for topwar.ru
Ctrl Enter
Noticed oshЫbku Highlight text and press. Ctrl + Enter
We are
The attack on the Russian aircraft and the political situation in TurkeyResults of the week "I do not need a Turkish coast"
Military Reviewin Yandex News
Military Reviewin Google News
74 comments
Information
Dear reader, to leave comments on the publication, you must to register.