In the life of any state there are situations of unforeseen, arbitrary changes in the state of social relations, the elimination of which is the functional responsibility of the authorities and local self-government. It is necessary to take measures, which are usually prohibited by law: restrict the constitutional rights and freedoms of citizens and organizations, as well as impose additional obligations on them.

In the National Security Strategy (NB) of the Russian Federation before 2020, it is noted that the NB is a state of protection of an individual, society and the state from internal and external threats, which allows to ensure constitutional rights, freedoms, decent quality and standard of living of citizens, as well as sovereignty, territorial integrity and sustainable development of the Russian Federation.

“Terrorist activities against Russia are characterized by thorough preparation and professional conspiracy”
The tasks of the NB have acquired particular relevance recently, when the threat of international and domestic terrorism, banditry, and other organized criminal manifestations has significantly increased. Accidents, catastrophes and natural disasters also cause serious damage to the interests of the state.

There is no doubt that in the modern world these tasks are successfully solved only with the use of all the available means and methods - economic, socio-cultural, political and legal. The priority, of course, must belong to the first, since it is the economic and socio-cultural levers that are aimed at eliminating the root causes of instability and tension in society.

However, experience shows that underestimation of political and legal methods reduces the effectiveness of the forces and means of preventing or localizing emergency situations (ES) and eliminating their consequences. Therefore, in cases where negative changes of any kind are out of control and cannot be neutralized by conventional means, authorities should be able to use special response measures, the totality of which is defined as special state-legal regimes (OGPR). This is a hard restriction, in which the main place is given to the norms of emergency legislation, consisting of prohibitions and obligations.

OGPR should be considered at two levels: as a combination of legal means and methods of regulation and as an order of activity of state bodies, designed to ensure compliance with the established rules.

The introduction of the OGPR is directly or indirectly provided for by the Constitution of the Russian Federation and specified by special federal legislation. The right to their introduction has the president.

The legislation establishes the following main types of OGPR: state of emergency or martial law (PE or EP), as well as a counterterrorist operation. Let us dwell on the essence and conditions of the introduction of each of them.

State of emergency means, in accordance with the Constitution of the Russian Federation and federal constitutional law, a special regime of activity of state authorities, local governments, organizations regardless of ownership, their officials, associations, allowing for the establishment of certain restrictions on rights and freedoms citizens of the Russian Federation, foreigners, stateless persons, as well as organizations and public associations. In addition, they are assigned additional responsibilities. 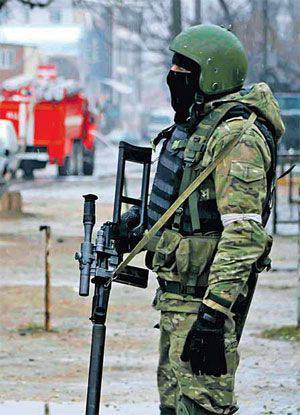 The basis for the introduction of emergency are the following emergencies:

Depending on the type of emergency, measures and actions are determined. They are subdivided into joint ones for social and natural-technogenic regimes, social-political and counter-crime, natural-man-made.

To establish the state of emergency, forces and facilities of the ATS and the MVD, UFSIN, FSB and EMERCOM of Russia are involved. In exceptional cases, the Armed Forces of the Ministry of Defense, other troops, military units and agencies may be involved.

Ensuring NB in ​​extreme conditions is achieved through the improvement and development of a mechanism to prevent and eliminate natural and man-made emergencies. The solution of these tasks is connected with an increase in the effectiveness of the implementation of the powers of local governments in ensuring the safety of life of the population, updating the fleet of equipment and production technologies at potentially dangerous objects and life support facilities, introducing modern technical means of informing and alerting the population in the places of their mass stay, and developing systems for taking preventive measures to reduce the risk of terrorist attacks and mitigate the consequences of such emergencies.

The counter-terrorist operation regime (CTO) is a complex of operational-combat, military and other measures using military equipment, weapons and special means, carried out with the aim of suppressing terrorist acts and neutralizing terrorists.

The specificity of the current geopolitical situation for Russia is the high degree of interdependence of external and internal threats to the interests of the NB of the state.

According to the leaders of some Western countries, the right time has come to weaken Russia, deprive its allies and continue to surround the belt with hostile states and regimes that, with the help and guarantees of the West, are ready to exhaust it with provocations, local wars, internal conflicts, terrorist attacks and all sorts of sanctions.

It should be noted that terrorist activities against Russia are characterized by a number of features, which include:

- thoroughness of preparation and professional conspiracy;
-modern level of equipment and technical equipment;
-the presence of highly maneuverable and protected means of delivery of forces and equipment to the attacked object;
- extraordinary and professional strategy of terrorists;
- reconnaissance and counterintelligence, the presence of previously convicted terrorist groups and armed groups, as well as persons familiar with the methods and acts of sabotage.

Since the beginning of the XXI century, terrorism has moved from individual incidental cases into the category of massive, constant, real threats. The modern world is filled with a huge number of diverse groups, sects, fans, etc. Actions of intimidation are most often organized and coordinated, fit into the world terrorist system. So, according to the Supreme Court of Russia, 22 organizations are recognized as terrorist. Among them are the “Congress of the Peoples of Ichkeria and Dagestan”, “The Emirate of the Caucasus”, “Al-Qaeda”, “The Taliban Movement”, “The Islamic Party of Turkestan”, “The Right Sector”, “The Islamic State”, “Dzhebhat al-Nusra” ( "Victory Front").

An open campaign is currently being conducted against Russia in order to destabilize the existing political and economic situation in the country and damage it. But in the Russian Federation an effective system of countering this has been created.

The main directions of state policy in this area are determined by the president, he also establishes the competence of the federal executive bodies.

KTO in the territory of the Russian Federation is carried out in order to suppress a terrorist act, if it cannot be done by other forces or methods. The person who made the decision to start KTO is its leader and is personally responsible for the conduct. On the territory where KTO is going, a special regime may be introduced providing for the restriction of constitutional rights and freedoms of citizens in the form of special measures and restrictions, including:

- verification of identity documents from individuals;
- removal of individuals from certain parts of the area and objects;
-strengthening the protection of public order, facilities subject to state protection and ensuring the vital activity of the population and the functioning of transport;
- control of telephone conversations and other information transmitted via telecommunication systems;
-the use of vehicles to perform the task of the CTO;
- suspending the activities of hazardous industries and organizations that have explosive, radioactive substances, chemical and biologically hazardous substances.

Suppression of the terrorist act is carried out by the forces and means of the FSB, as well as a specially created group, which may include units, military units and formations of the Armed Forces, as well as relevant units of federal and regional executive bodies.

KTO participants use military equipment, weapons and special equipment in accordance with the regulations of the Russian Federation.

A CTO is considered complete if the threat to life, health, property and other legally protected interests of people in the territory within which the operation was performed has been eliminated.

The martial law regime (RWP) is introduced by the president in the event of aggression (or its threat) against the Russian Federation.

In our country, the regulation of RWP in the form of a special legislative act first appeared at the end of the XIX century.

In accordance with the rules on localities declared by the IDPs, from 18 June 1882, the provinces, counties, counties, or individual settlements located in the war zone and which are of great importance to the integrity of the state or military interests, could be declared VP.

Analyzing the results of the last decades, it is impossible not to come to a sad conclusion: neither the development of humanistic principles, nor the democratization of society, nor scientific and technical progress made the lives of people safe. The world order set by the millions who died in the war with Nazi Germany is collapsing before our eyes. Against the background of the intensification of the struggle for the possession of energy and raw materials, the actions of international terrorism increase the scale of regional and global instability.

In 2008, for the first time in the territory of the former USSR, a professional army, trained by foreign instructors and advisers, trained and equipped according to NATO standards, ready for a high-tech modern-type war entered the fighting. We are talking about the armed forces of Georgia, prepared for war in the Caucasus in the geopolitical interests of the United States and NATO.

Adopted in 1970 at the XXV session of the UN General Assembly, the declaration on the principles of modern international law is now more and more often ignored by the countries of the North Atlantic Alliance.

Currently, the RWP by Federal Constitutional Law of January 30 2002 of the Year No. 1 (as amended by April 12 of 2014 of the Year) “On Martial Law”. The law contains the full range of economic, political, administrative, military and other measures aimed at creating conditions for repelling or preventing aggression.

Acts of aggression against the Russian Federation are:


The use of armed force against the sovereignty, political independence and territorial integrity of the Russian Federation can also be recognized as an act of aggression.

VP is introduced by presidential decree, which must be considered by the Council of the Federation within 48 hours.

The urgency of the tasks solved under the conditions of the RWP over time not only has not disappeared, but, on the contrary, grows proportionally to geopolitical problems and is expressed in:

the continued expansion of NATO to the east, the formation of new military bases near the borders of Russia and the desire to deploy nuclear weapons there;
active creation of a western missile defense system around the perimeter of our borders, the development of new offensive weapons, including hypersonic weapons;
military operations conducted by the United States and its allies in the Middle East, in North Africa and the fratricidal war unleashed by the West in Ukraine.


The US Congress 4 December 2014 almost unanimously adopted Resolution No. 758, in which Russia is characterized as an aggressor and lists a number of measures for its political, economic and military weakening.

These reasons served as a weighty basis for the Security Council of the Russian Federation to clarify the Military Doctrine of Russia and to make 12 March 2014 of additions and changes to the existing federal constitutional law "On Martial Law".

Ctrl Enter
Noticed oshЫbku Highlight text and press. Ctrl + Enter
We are
Situational analysis of the death of the MH17 flight (Malaysian Boeing 777), made on the basis of engineering analysis from 15.08.2014Military doctrine of the Russian Federation
Military Reviewin Yandex News
Military Reviewin Google News
19 comments
Information
Dear reader, to leave comments on the publication, you must to register.