November 26 2015
5
Once again, dear readers of Military Review, I will give the floor to the child. I think this is right. After all, whenever possible, any good impulse should be supported - it gives strength to go farther. And, as in the previous work, it is especially important that Alyona Leonova, a third-grader of the school of the village of Terbuny, Lipetsk Region, wrote her essay, not for the Victory Day holiday or for some kind of competition. And simply because I wanted to save what I learned, - history my family.


“Mom's great-grandmother, Maria Konstantinovna Kartavykh (nee Karavaeva) often told my mother how hard she lived during the Great Patriotic War. They lived in the Dolgorukovsky district, then his territory still belonged to the Oryol region. Maria Konstantinovna had seven brothers and sisters. And shortly before the war, she married, in the new family two kids were born. But what kind of childhood is there when the fascists attacked their homeland!

While the parents worked from morning to evening in the field or on farms, the children themselves tried to manage the housework. It is not only about the children of Maria Konstantinovna, but also about those of her little brothers and sisters who have not yet had time to become adults. Those who are older looked after the babies, and this law existed at that time in all families.

There was almost nothing, because everything possible tried to send to the front to help our soldiers to win. Therefore, sometimes there was nothing to walk on (note by an adult author: how can you not recall Alexei Tolstoy’s famous “Poroshka” fairy tale, over which my friend the boy once naively laughed: what a fuck, one pair of pants for all!). Fortunately, my great-grandmother knew how to sew beautifully. True, it was almost impossible to find fabric for new things, but she repaired old, worn-out things so that they “looked younger”.

All men of military age were taken to the front, including the great-grandmother's husband, three siblings (Vasily, Aleksey and Vladimir) and two cousins. Prababushkin husband, Peter Pavlovich Kartavykh, went missing in January 1942 of the year. He was 27 years old.

Unfortunately, we do not know anything about the fate of Alexei Karavaev: he did not return from the war. We searched for information about it on the Internet, but have not yet found it. 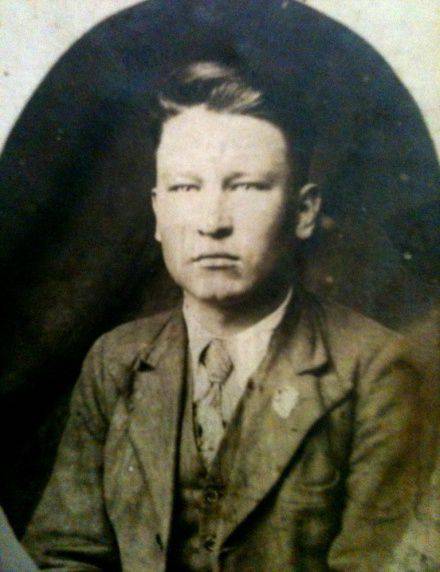 Vladimir Karavayev was wounded, came home with numerous awards - so said the great-grandmother. However, we haven't found anything on the sites yet, but I want to know more ... 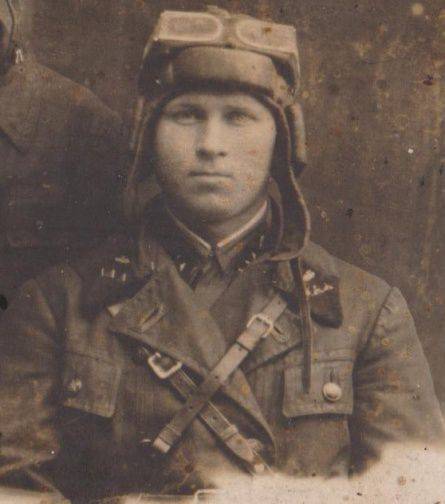 But on the third brother, Vasily Konstantinovich Karavaev, we now have information. It turns out that before the war, he participated in the battles of the Finnish Front. And the 22 June 1941 of the year was again called up for military service - at that time he was 25 years old.

Vasily Konstantinovich served on the Southwestern Front with the rank of junior lieutenant, he was a commander tank 278th tank battalion of the 31st division of the tank brigade. Here is a quote from his award sheet: “In the battle of Karmanovo during the attack on Plem Baza on August 18, 1942 V.K. In this battle he was wounded. Presented to the Order of the Red Star.

Vasily Konstantinovich died in December 1942 of the year near Smolensk, during the formation of the Vazuza River, on the outskirts of the Vyazma-Rzhev railway. He was buried in a mass grave in the village of Aristovo, Sychevsky district, Smolensk region. 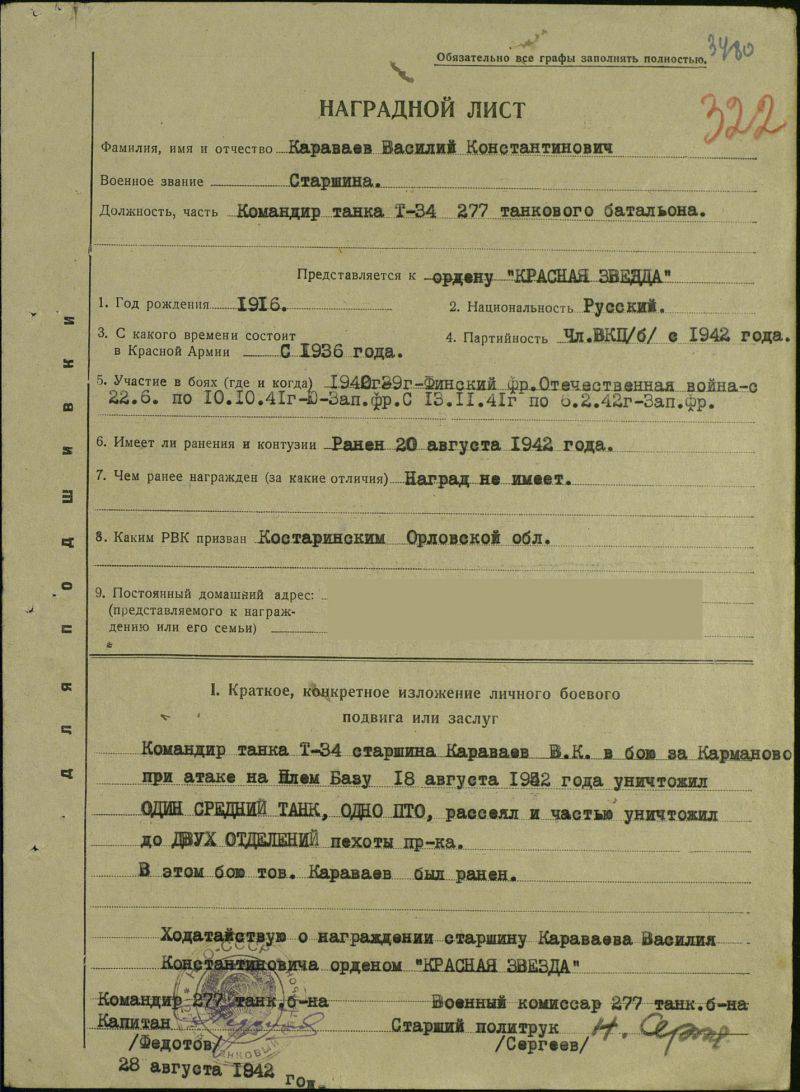 I wrote that my great-grandmothers cousins ​​went to the front. They also bore the surname Karavaev - Venedikt Semenovich and Mikhail Semenovich.

Mikhail Semenovich was the younger brother: when the war began, he was only 21 a year old. He received his specialty medical assistant and a year before the start of the war, 25 June 1940, he was drafted into the army, into the 120 medical nursing battalion of the village of Kushuv, Vologda Oblast, and from there went to the front. Michael also fought a short time: 12 August 1941, he went missing.

And Venedikt Semyonovich went through the whole war, was the commander of the 271st battery of the 82nd anti-aircraft artillery regiment. His battery was considered heroic, and not without reason. So, in 1941, being surrounded on the island of Vierca, the great-grandfather’s battery not only reflected enemy raids aviation, but also constantly fired at ground targets. In that battle, she destroyed an entire mortar battery of Nazis, two of their observation posts and destroyed the railway line.

Venedikt Semenovich defended Leningrad, and after the blockade was lifted, he relocated the battery to the village of Ruchi. Great-grandfather returned home to Dolgorukovsky district, awarded with numerous orders and medals. He began working as a teacher at school and always said that past trials should never embarrass the soul - otherwise it will affect the upbringing of children. My mother loved to visit him. Benedict Semenovich had a large collection of postcards, in his spare time he wove beautiful baskets from a vine, while managing to sway in a rocking chair. And also great-grandfathers had a big garden, where apples, plums, hazel and many berries grew.
Benedict Semenovich died in the 1994 year, at the eightieth year of life.

It would be wrong to write only about those of my relatives who fought at the front. After all, those who worked in the rear also performed a great feat every day. So, my great-grandfather Nikolai Romanovich Zvyagin was an eleven-year-old boy when the war began. And when ended - a teenager. But on a par with adults, he restored the agriculture of our country after the Nazi destruction, and therefore the state equated him to a war veteran. I remember Nikolai Romanovich - he was very kind, he never scolded us for pranks and always tried to pamper him ... ”

It would be possible to finish this, but, as they say, the catcher and the beast run. I am always very attentive to the papers thrown on the street - what if this is something that a person is looking for? I must say, the finds are very interesting. So, once I stumbled upon the diary of his pupil-neighbor, which he specifically lost to avoid parental punishment. But this is not the point. So, a few days ago, an open notebook caught my eye near the school building. She was lying on a bench - apparently forgotten. I glanced over to a couple of pages of written pages - it was an essay-discourse on the story by Boris Vasiliev “And the dawns are quiet here.” Wrote a girl. Most of the adjectives in this composition are in excellent form: the deepest, most interesting, and so on. A lot of enthusiastic words about the feat of girls and patriotism in general. Some quotes snatched, in my opinion at random. Immediately obvious: a good half is written off from an online resource. And what is the point of such work? I immediately recalled the complaint of one Russian teacher: “I asked them an essay - there were six absolutely identical in the class!” Of course, they were taken from the Golden Fund.

Here, dear readers, because I was so attentive and treated the work of Alena Leonova. Moreover, it was written not from the order, but from the heart.

Ctrl Enter
Noticed a mistake Highlight text and press. Ctrl + Enter
We are
My grandfather's front-line letters (part 2)Father told
5 comments
Information
Dear reader, to leave comments on the publication, you must to register.