Who sees ISIS in the allies of Ukraine? 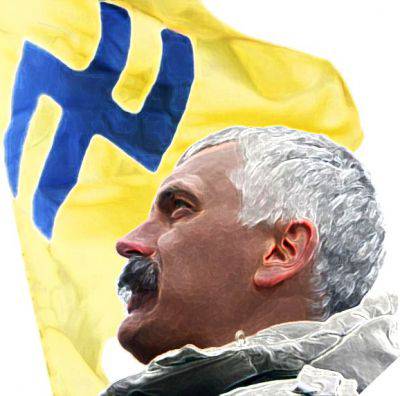 “The intelligence services of Ukraine must be pragmatic and effective. It’s not their right to arrest the Islamists, the enemies of Moscow. It’s only worth asking them to shoot accurately at the Moscow terrorists in the Caucasus and Syria. Unfortunately, the SBU sometimes arrests or deports Caucasians who travel from Syria to Muscovy, for belonging to ISIS. It is unreasonable. Why should Ukraine quarrel with Islam? At the moment, the oppressed peoples of the post-Soviet empire and the proletarian peoples of the Near and Middle East are our only effective ally in not against Moscow imperialism. We must act in accordance with its own benefits. Everyone who is fighting for the liberation of his people from the imperialist yoke of Moscow, has a right to asylum. "


This statement seriously shaken the brains of even the very hardened Internet users in Ukraine. Judging by the reaction. But what, or rather, who is behind such a masterpiece, which would be a good idea to read the next one to those who continue to pour money into Ukraine in the West. And not just to pour in, but to supply items for military purposes.

This was posted by someone Dmitro Korchinsky, known for his repeated scandalous statements. In the summer of this year, he argued that the Ukrainian army should bomb residential areas and drive the inhabitants of the DPR and LPR to concentration camps. In his opinion, it is possible to return the Donbass to the control of Kiev only in this way. He also claimed that most of the homes in Germany during the Second World War were destroyed by Anglo-American aviation thanks to the order "to bomb residential areas in order to undermine the morale of German soldiers at the front."

And now the new appeal, not inferior in humanity and normal human logic (more precisely, the complete absence of these) to the previous one.

But what is Dmitry Korchinsky?

If in general, then it is a vivid example of a national-patriotic loser. The only thing that he really got in life is to finish high school and serve in the army. Two attempts to get a higher education did not succeed.

When “glasnost” and “perestroika” began in the USSR, Korchinsky began to engage in active political activity. Thus, in the period from 1987 to 1988, he worked in the Ukrainian Helsinki Union for a year. This, who does not know, is the first legal anti-Soviet organization in the USSR.

In 1990, together with Oleg Vitovic, he established the Ukrainian Nationalist Union (ONS) and the Ukrainian Inter-Party Assembly (UMA), which united a number of organizations of a radically nationalistic orientation (SNUM, ONS, UNP, DSU, etc.)

In March, 1991 became the head of the National Council of the UMA, a veteran of the Nazi movement, Yuri Shukhevych (the son of Roman Shukhevych, head of the Ukrainian Insurgent Army, who fought in the Second World War on the side of the Nazis).

In November, 1991 UMA was renamed the Ukrainian National Assembly (UNA). UNSO has become a "fighting" wing of the organization. It turned out a single UNA-UNSO. Korchinsky with 1991 - Deputy. Commander-in-Chief Y. Shukhevych, in fact, the “field commander”.

In the summer of 1992, an archery squad of UNSO, led by Korchinsky, participated in the Transnistrian conflict (as did Russia, on the side of the separatists). Korchinsky was even really awarded the highest order of the Transdniestrian Moldavian Republic - the “Order of the Republic” and the medal “Defender of Transnistria”.

In 1992-1994, Korchinsky with "archers" took part in hostilities on the territory of Abkhazia as part of the Georgian troops Dzhaby Ioseliani.

Korchinsky also fought in Nagorno-Karabakh (on the side of Azerbaijan).

And then I decided that to fight enough, it's time to reap the benefits. And he went to the polls. But with the election it turned out about as with higher education.

In November, 1992 ran for a by-election to the people's deputies of Ukraine in the electoral district No. XXUMX; got 13-place among 4 candidates (elections did not take place).

In March, 1994 ran for the deputies of Ukraine for Vatutinsky huts. N2 district, did not reach the second round, having received 9,87% in the first round (3-place among the 24 candidates).

Of the approximately 60 candidates, the UNA-UNSO candidates were elected by the Verkhovna Rada people's deputies in the spring of 1994: three: O. Vitovic, Yuri Tyma and Yaroslav Ilyasevich.

29 September 1995 The Ministry of Justice of Ukraine withdrew the UNA-UNSO from being registered as a political party on the basis that the Constitution of the Republic of Uzbekistan prohibits political parties from having militias. The loss of the status of a registered organization blocked the UNA-UNSO the possibility of participating in elections.

In 1997, Korchinsky and the party leadership of the UNA-UNSO have a conflict, as a result of which the activist leaves this political force.

In 1999, he founded the Institute for Problems of Regional Politics and Modern Political Science, as well as a new political force, the All-Ukrainian Political Party "Brotherhood". But the official registration of this party was able to pass only in 2005 year.

Korchinsky takes part in the parliamentary elections in the 2002 year, but again does not fall into the walls of the Verkhovna Rada of Ukraine.

In 2004, Korchinskiy participated in the presidential election campaign, but was able to get only 0,17% of votes.

In the early days of Euromaidan, he took an active part in it, but was later put on the international wanted list, so he was forced into hiding.

5 February 2014 Korchinskiy year arrests the police in Israel, but the security forces of Ukraine promptly remove the policy from the international search; then the leader of the Brotherhood was released. The next day, Korchinsky returns to Ukraine. What, in fact, congratulate Ukraine is not worth it.

In principle, there is nothing new in the portrait of one of the most vociferous politicians in Ukraine. A typical loser in life, whom the Nazi fanabia in his head, frank fascists in the Verkhovna Rada and, of course, the Maidan, led to the podium and into the Ukrainian TV.

Enemy need to know in person. Here you have one of the persons who are being listened to today in Ukraine. Pleases, however, the fact that they do not really hear, judging by the voting results.