November 17 2015
299
Russian Defense Minister Sergei Shoigu confirmed that the counter-terrorist operation in Syria involved strategic bombers of the Russian Aerospace Forces. These are the Tu-22, Tu-95MS and Tu-160 aircraft. According to the head of the military department of the Russian Federation, the attraction of an additional number of aircraft made it possible to increase the intensity of strikes against positions and targets of militants approximately twice. 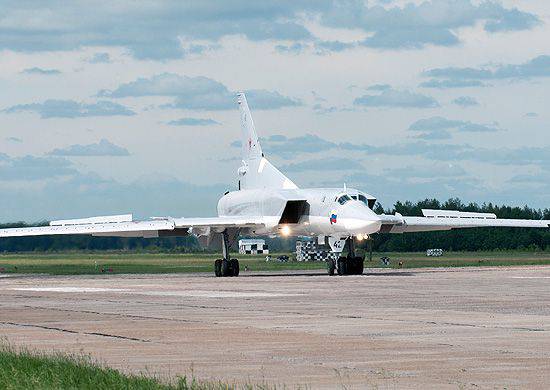 Sergei Shoigu during the report to the Supreme Commander:
In total, on the first day of the air operation, 127 sorties were planned for 206 terrorist targets. Currently, 82 combat sorties have been completed, during which 140 bandit objects have been destroyed. The operation continues.

The strikes are being carried out according to the plan developed by the General Staff the other day. The plan provides for the use of 25 Far aviation.

The General Staff of the Armed Forces of the Russian Federation reported on the expansion of the security zone in the province of Latakia, where the Khmeimim airbase is located, which is actively operated by the Russian military of the VKS. It became known that from the sea, the air base is covered by the Moscow-based Guards missile cruiser. Engaged in "Moscow" and the cover of ships delivering goods to Syria by sea.

RIA News cites the message of the General Staff of the RF Armed Forces:
Guards missile cruiser "Moscow" as part of the operational connection of the naval fleet in the eastern part of the Mediterranean Sea, it solves the tasks of ensuring the combat stability of ships and vessels carrying out transportation to the Syrian Arab Republic, covering the naval bases of the Russian air group and the unloading point for goods delivered by sea.

It is noted that Russian President Vladimir Putin instructed the crew of the cruiser "Moscow" to establish contacts with the French military personnel participating in the counter-terrorist operation.

The report of the General Staff of the Russian Federation and said about the increase of objects of the space group for the implementation of the fight against terrorist armies in Syria.

The chief of the General Staff, Valery Gerasimov, reports that air-launched cruise missiles have been used on terrorist sites in Syria. 14 terrorist facilities, including command and control posts, were destroyed in the provinces of Idlib and Aleppo. A total of 34 cruise missiles were launched. Earlier, the French media reported on strikes with cruise missiles, which Russia allegedly inflicted through warships located in the Mediterranean Sea.

Valery Gerasimov on the progress of the operation:
Aviation equipment is serviced, objective control materials are analyzed for subsequent departures. The reinforced squadron of Tu-22М3 long-range bombers from Mozdok during the day inflicts two group air strikes on ISIS objects in eastern Syria, in Deir ez-Zor and Raqqa provinces. One of the blows was carried out at night, the second is being carried out at the moment.

It is noted that all the aircraft that had time to take part in the attack on the positions of the militants returned to the air bases in Russia and Syria.

The defense Ministry reported to Vladimir Putin on the progress of the Russian operation in Syria:


Video from the Ministry of Defense of the Russian Federation: