November 15 2015
24
November 15 is the All-Russian Day of the Recruit in our country. In the calendar, this holiday appeared in a difficult time for the state - in 1992 year. For all, to put it mildly, the ambiguity of the policy pursued by the then state authorities, the attention that needs to be paid to popularizing military service among young people was still remembered. Perhaps they remembered “through I can't” ...


It should be noted that the appearance of the All-Russian Day of the Recruit in the calendar at that time was, perhaps, the only manifestation of concern on the part of the state about the future of the Russian defense shield. The country itself was on the verge of survival, and by no means everyone in 1992 understood exactly which state should take the military oath - borders broke, internal conflict broke out without outside intervention, Russia was confronted with a terrorist threat that quickly found the weakest points in the system security. Moreover, the state authorities declared that from now on Russia has no enemies, everyone suddenly became our best friends, the market is our everything, the army is a relic of the scoop. All sorts of “committees have never given birth to soldiers' mothers” appeared, the funding of which was generously provided by all the same “friends” (by the way, it is still ongoing). The agenda of those who did not give birth consisted in the thesis: military service is not an honorable duty, but a yoke, that is why it is taboo to let your sons go to military service. Why, still friends around ...

The beginning and the mid-90s is also a time when the activity of such committees and other “human rights” organizations, along with painstaking work to break up the country's defense capabilities, has led to a level of confidence in the army. Arguments in the style of “abroad will help us” began to come to naught only at that moment when the terrorist rabble sponsored by the “partners” not only threatened the sovereignty of the country, but called into question the further survival of Russian statehood as such. The veil of trust in “friends” and euphoria about the “freedom” that fell on my head (as it was then called) began to disappear, Russia experienced a series of bloody conflicts, including through which it was forged that without unity Russia has no future, no way without powerful army and fleet.

But a powerful army and a combat-ready fleet cannot be built without trained servicemen, without precise work by military commissariats, without a well-functioning conscription system. Today, and this is encouraging to talk about, work of this kind is underway. 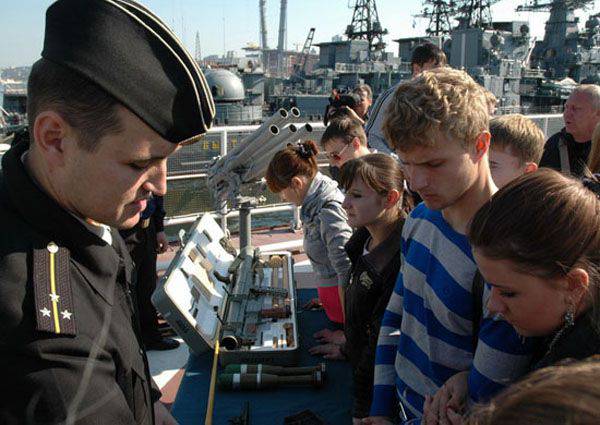 In all Russian regions, as part of the Recruit's Day, events are held in which young people and, by the way, interested girls are shown an army life, samples of modern weapons, tells about the combat path of an army formation. 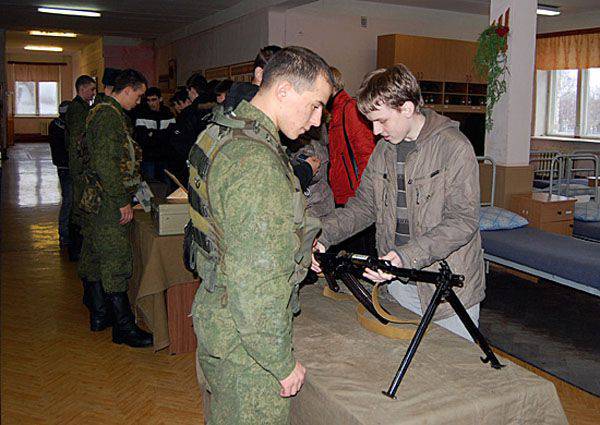 Much attention during the meetings of servicemen with future defenders of the Fatherland is paid to the regulations of service in the modern army. The officers of the military commissariats say that they often hear not even a question from pre-conscripts, but the real statement that the service life has allegedly increased for some time, and that the young recruits will have to serve in the army not for 12 months, and almost 2-3 times longer. The servicemen complain that such “ducks” are often spread through social networks and their goal is clearly to put an opportunity to throw a grain of doubt into the souls of young people about the very feasibility of military service. The officers of the military commissariats responsibly declare that the term of service for those serving on conscription remains the same - exactly 12 months, and the Ministry of Defense of the Russian Federation is not going to revise it.

Before you go to the army, the young man must undergo a medical examination. Here recently there was a reason for optimism. Members of draft commissions and employees of the main defense department of the country note a reduction in the number of persons who are considered unfit for medical purposes to serve in the army. The percentage of young people who suffer from underweight has decreased. And, most importantly, this is a trend that has been marked for several years now.

An important aspect of the call is the understanding by the young man that service in the army is an honorable duty. Defending one’s homeland, one’s home, is what distinguishes a real man - a man who can stand up for himself, for his relatives and friends, for the country. The Ministry of Defense also says that for some time now the percentage of those “running” from military registration and enlistment offices has also decreased. This shows an increase in the prestige of service in the Russian army. 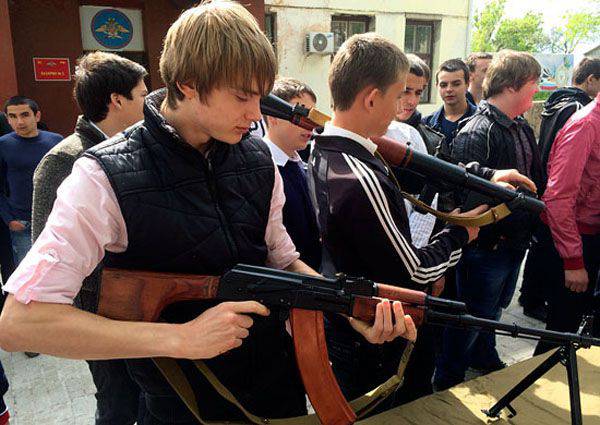 The information component here plays a significant role. If the 15-20 years ago, the level of dirt poured on the army through the media was prohibitive, and this affected the authority of the military and the attitude of young people to the service, then today the situation is different.

Of course, those informational (or, more correctly, disinformational) resources are preserved, which their task is to pick out only negatives and dill for trying to form the image of the defender of the Fatherland, which is more like a human misunderstanding. But the attitude to this kind of resources, the society has managed to develop appropriate. More people, including young people, began to understand a significant thing: there are enough problems in the army, as in any other field of activity, but problems will not go anywhere if you try to shift the responsibility for their decision "to the neighbor". More citizens began to realize that the combat-ready, trained, secured army is not a whim of statesmen, it is a guarantee of state sovereignty, and if you treat military service as someone else’s duty, but not yourself, is it possible after that consider yourself a patriot, and indeed a responsible citizen?

"Military Review" considers it necessary to appeal to the younger generation of Russians.

Friends, the main law of the Russian Federation - the Constitution says that the defense of the Fatherland is the duty and duty of a citizen of the Russian Federation. This is not just a legal wording. In these words is what is called civil liability, an understanding of its role in strengthening the security of the country. The word MOTHERHOOD itself, containing in the text of Article 59 of the Constitution of the Russian Federation, says that the young defender of the Motherland must be aware of the connection between generations, not forgetting that there were people in his family who contributed to the protection of the integrity and independence of the country, perhaps giving their lives for her. - Life for the country, which is our big common home, where everyone has not only rights, but also responsibilities. This memory and this respect can and must become the basis for understanding our important place in the diverse society of Russian citizens.