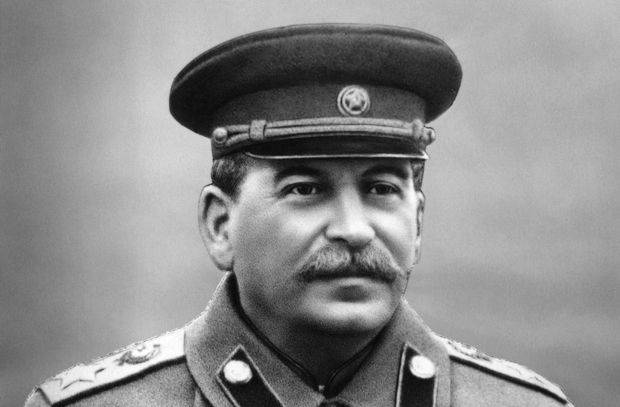 The most famous, the most terrible and the most controversial order of the Great Patriotic War appeared through 13 months after it began. This is the famous order of Stalin number 227 from 28 July 1942 of the year, known as “Not one step back!”.

What was behind the lines of this extraordinary order of the Supreme Commander? What caused his frank words, his cruel measures, and what results did they bring?

"We do not have dominance over the Germans ..."

In July, the USSR's 1942 was again on the verge of a catastrophe - having sustained the first and most terrible blow of the enemy in the previous year, the Red Army in the second year of the war was again forced to retreat far to the east. Although Moscow was saved in the battles of last winter, the front still stood 150 km away. Leningrad was in a terrible blockade, and in the south after a long siege Sevastopol was lost. The enemy, breaking through the front line, captured the North Caucasus and rushed to the Volga. Again, as at the beginning of the war, along with courage and heroism among the retreating troops, signs of a decline in discipline, alarmism and defeatism appeared.

By July, 1942, due to the retreat of the army of the USSR, lost half its potential. 80 million people lived before the war behind the front line in the German-occupied territory, about 70% of coal, iron and steel were produced, 40% of all USSR railways were laid, half of the livestock and crop areas that had previously given half the crop were located.

It is not by chance that Stalin’s order No. 227 for the first time spoke very frankly and clearly about this to the army and its fighters: “Every commander, every Red Army man ... must understand that our means are not infinite ... The territory of the USSR that the enemy seized and seeks to seize is bread and other products for the army and the rear, metal and fuel for industry, factories, factories supplying the army with weapons and ammunition, railways. After the loss of Ukraine, Belarus, the Baltic States, Donbass and other areas, we had less territory, therefore, there were much less people, bread, metal, factories, factories ... We do not have dominance over the Germans either in human resources or in bread stocks . To retreat further is to ruin ourselves and at the same time ruin our homeland. ”

Earlier, Soviet propaganda described above all successes and successes, emphasizing the strengths of the USSR and our army, then Stalin's order No. 227 began with a statement of terrible failures and losses. He emphasized that the country is on the verge of life and death: “Each new piece of territory we left will strengthen the enemy in every possible way and weaken our defense, our Homeland in every possible way. Therefore, we must fundamentally stop talking about the fact that we have the opportunity to retreat endlessly, that we have a lot of territory, our country is large and rich, there is a lot of population, there will always be plenty of bread. Such conversations are deceitful and harmful, they weaken us and strengthen the enemy, because if we do not stop retreat, we will be left without bread, without fuel, without metal, without raw materials, without factories and plants, without railways.

“To retreat further is to ruin oneself and ruin our homeland” 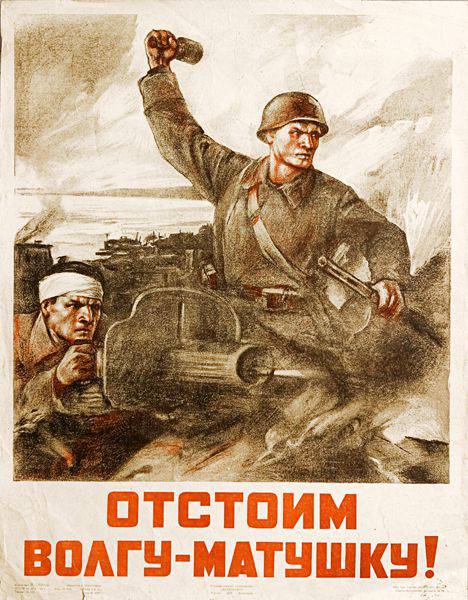 Poster Vladimir Serov, 1942 year. Photo: RIA News
The order of the People's Commissar of Defense of the USSR No. 227, which appeared on July 28 1942, was already read out to the personnel in all parts of the fronts and armies already in early August. It is these days that the incoming enemy, breaking through to the Caucasus and the Volga, threatened to deprive the USSR of oil and the main ways of its transportation, that is, to completely leave our industry and technology without fuel. Together with the loss of half of the human and economic potential, this threatened our country with a mortal catastrophe.

That is why the order number 227 was extremely frank, describing the loss and difficulties. But he also showed the way to the salvation of the Motherland - the enemy had to be stopped by all means at the approaches to the Volga. "Not one step back! - addressed in the order of Stalin. - We must persistently, to the last drop of blood, to defend every position, every meter of Soviet territory ... Our Motherland is going through difficult days. We must stop, and then drop and defeat the enemy, no matter what we cost. ”

Emphasizing that the army receives and will receive from the rear more and more new weapons, Stalin in the order number 227 pointed to the main reserve within the army itself. “There is a lack of order and discipline ...” the leader of the USSR explained in the order. - This is now our main drawback. We must establish the strictest order and iron discipline in our army if we want to save the situation and defend our Homeland. Commanders, commissars, political workers cannot be tolerated any longer, and their units and formations leave fighting positions without permission. ”

But order number 227 contained not only a moral call for discipline and perseverance. The war demanded harsh, even cruel measures. "From now on, retreating from a combat position without orders from above are traitors to the Motherland," said the Stalinist order.

According to the order from 28 in July, 1942, the commanders responsible for withdrawing without an order, were to be removed from their posts and brought to trial by a military tribunal. For those guilty of violations of discipline, penal companies were created, where soldiers were sent, and penal battalions for officers who violated military discipline. As stated by the order number 227, "guilty of violating discipline on cowardice or instability" must "put on difficult areas of the army to give them the opportunity to atone for their crimes with the blood before the Motherland."

From now on, the front could not do without penalty units until the very end of the war. From the moment the order No. 227 was issued until the end of the war, 65 penal battles and 1048 penal companies were formed. Until the end of 1945, 428 thousands of people passed through the “variable composition” of the penalty box. Two penal battalion even participated in the defeat of Japan.

Penalty units played a prominent role in ensuring brutal discipline at the front. But one should not overestimate their contribution to the victory - during the years of the Great Patriotic War no more than 3 out of every 100 military personnel mobilized into the army and the fleet went through penal companies or battalions. “Penalties” accounted for no more than about 3 – 4% in relation to people on the front line, but about 1% in relation to the total number of those called up. 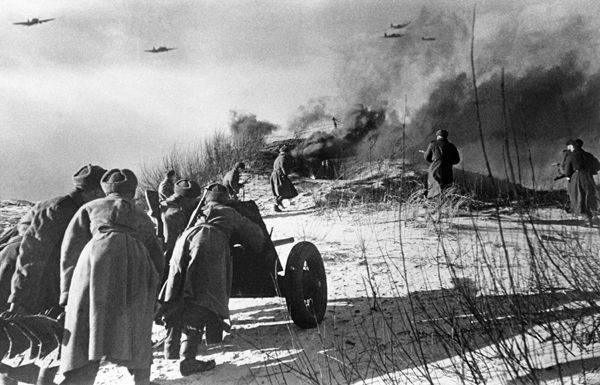 Gunners during the battle. Photo: TASS
In addition to the penal units, the practical part of the order number 227 provided for the creation of barrier units. The order of Stalin demanded "to put them in the immediate rear of unstable divisions and to oblige them in the event of panic and indiscriminate withdrawal of parts of the division to shoot alarmists and cowards on the spot and help honest division soldiers to fulfill their duty to the Motherland."

The first detachments began to be created during the retreat of the Soviet fronts in 1941, but it was order No. 227 that introduced them into general practice. By the fall of 1942, the 193 barrage force was already on the front line, the 41 barrage took part in the course of the Stalingrad bat. Here such detachments had the opportunity not only to carry out the tasks set by order No. 227, but also to fight the advancing enemy. Thus, in the Stalingrad besieged by the Germans, the detachment of the 62 Army was almost completely killed in fierce battles.

In the autumn of 1944, the defensive squads were disbanded by Stalin’s new order. On the eve of victory, such extraordinary measures to maintain front-line discipline were no longer required.

"Not one step back!"

But back to the terrible August 1942 of the year, when the USSR and all Soviet people stood on the brink of fatal defeat, not victory. Already in the 21st century, when Soviet propaganda ended long ago, and in the “liberal” version of our country's history, a solid “chernukha” prevailed, the war veterans who had passed through that war paid tribute to this terrible, but necessary order.

Vsevolod Ivanovich Olimpiyev recalls, in 1942, a fighter of the cavalry corps of the Guard: “It was, of course, a historical document that appeared at the right time to create a psychological change in the army. For the first time in an unusual content order, many things were called by their own names ... The first phrase "The troops of the Southern Front covered their banners with shame, leaving Rostov and Novocherkassk without a fight ..." introduced into shock. After the release of order No. 227, we almost physically began to feel how the nuts are wrapped in the army. ”

Konstantin Mikhailovich Sharov, a participant in the war, recalled already in 2013: “The order was correct. In 1942, a colossal retreat began, even flight. The morale of the troops fell. So the order number 227 is not in vain out. He came out after Rostov left, but if Rostov stood just like Stalingrad ... " 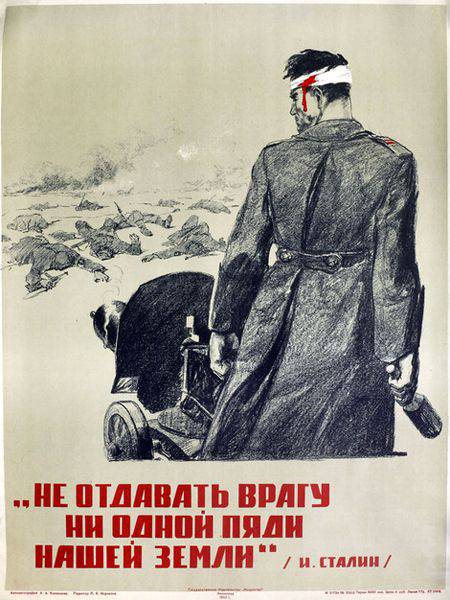 Soviet propaganda poster. Photo: wikipedia.org
The terrible order number 227 impressed all Soviet people, military and civilian. The personnel at the front read it before the line, it was not published and not voiced in the press, but it is clear that the meaning of the order, which was heard by hundreds of thousands of fighters, became widely known to the Soviet people.

Quickly found out about him and the enemy. In August 1942, our intelligence intercepted several orders on the 4th tank German army rushing to Stalingrad. Initially, the enemy command believed that "the Bolsheviks were defeated and order No. 227 can no longer restore either discipline or the perseverance of the troops." However, literally a week later, the opinion changed, and a new order of the German command already warned that from now on the advancing “Wehrmacht” would have to face a strong and organized defense.

If in July 1942 of the year, at the beginning of the onset of the Nazis to the Volga, the pace of advance eastward, deep into the USSR, was sometimes measured in tens of kilometers per day, in August they were measured in kilometers, in September - in hundreds of meters per day. In October, 1942, in Stalingrad, the Germans regarded promotion on 40 – 50 meters as a great success. By mid-October, such an “offensive” stopped. The Stalinist order “Not a step back!” Was carried out literally, becoming one of the most important steps to our victory.