Zakharchenko in Debaltseve: "This city for us is a symbol of resilience, a symbol of struggle" 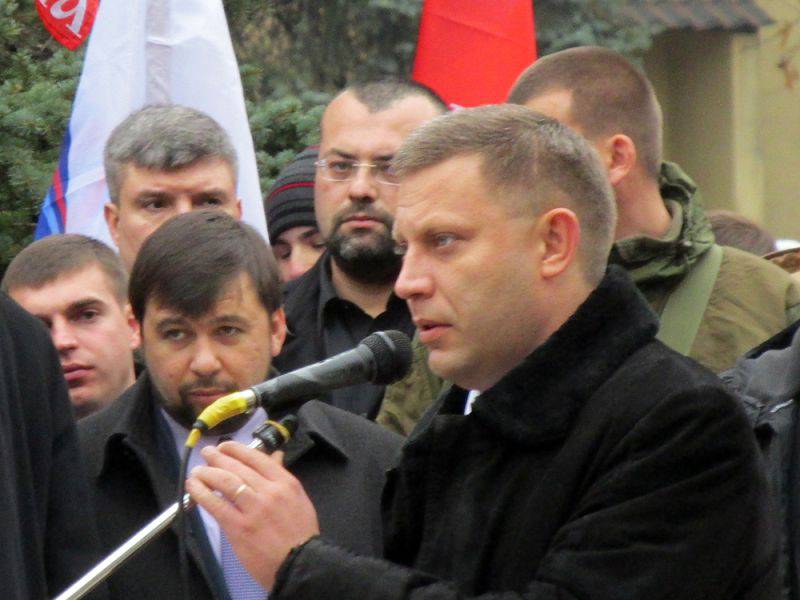 4 November 2014, Alexander Zakharchenko officially took office as the Head of the Donetsk People's Republic. And Alexander Vladimirovich decided to celebrate the anniversary of his inauguration, as well as the Day of National Unity, celebrated in fraternal Russia, in Debaltseve. Indeed, in his opinion, this city, along with Saur-Mogila, became one of the main symbols of the resilience of Donbass.

The leader’s working trip program was intense - this was participation in the opening of the First Republican supermarket, and a speech at the ceremony of consecrating a new monument in honor of fallen citizens of the DPR, and laying flowers at the memorial to those who died during the Great Patriotic War. And the visit ended with a big press conference.

Already in the morning people crowded in the city center. Hundreds of people were waiting for the opening of the First Republican supermarket. The building of the old store, which was previously located at this place, was damaged by Ukrainian shelling. Most recently, it was with traces of fragments and with broken windows (picture taken in September of this year): 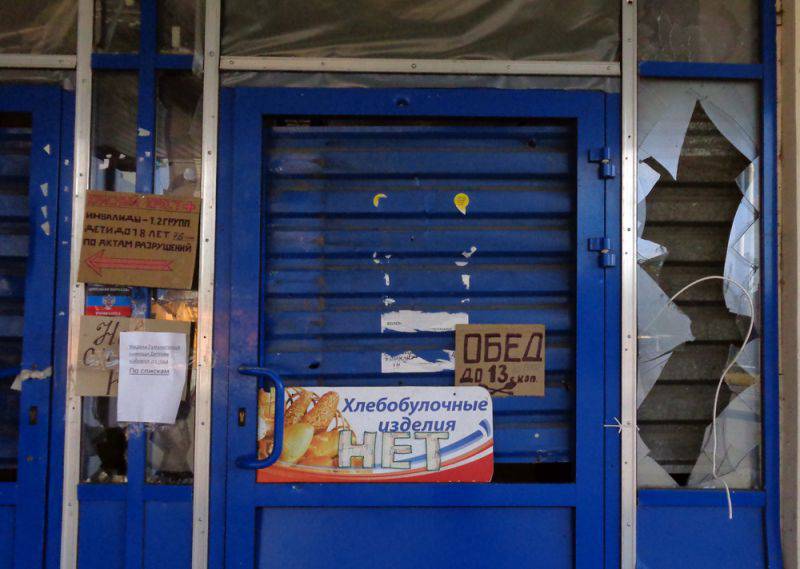 Now the store does not know - it has been repaired, it received a new name. The entrance is decorated with balloons of the colors of the Russian (!) Flag. 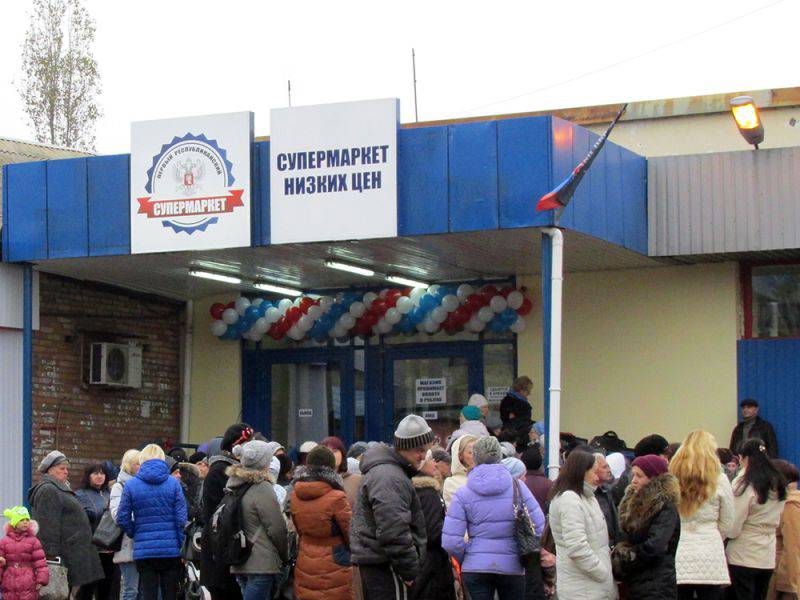 After all the suffering experienced by the city, it lacks many objects. Including - and shops. Small shops work, but the residents obviously missed the large supermarket where they could buy everything they needed at once. So the opening of the First Republican supermarket was received with joy. Music was playing from the speakers. Two girls, dressed in theatrical costumes, danced. Many townspeople came with children, as on a holiday. 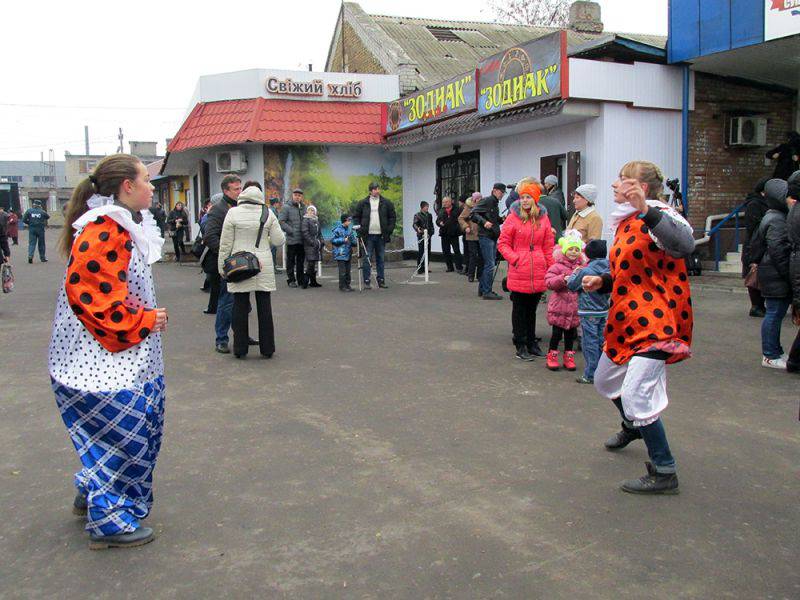 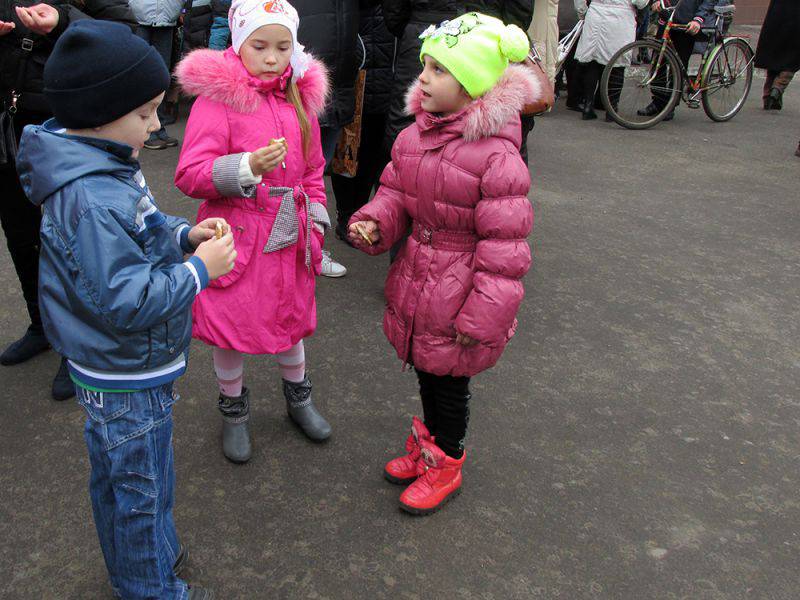 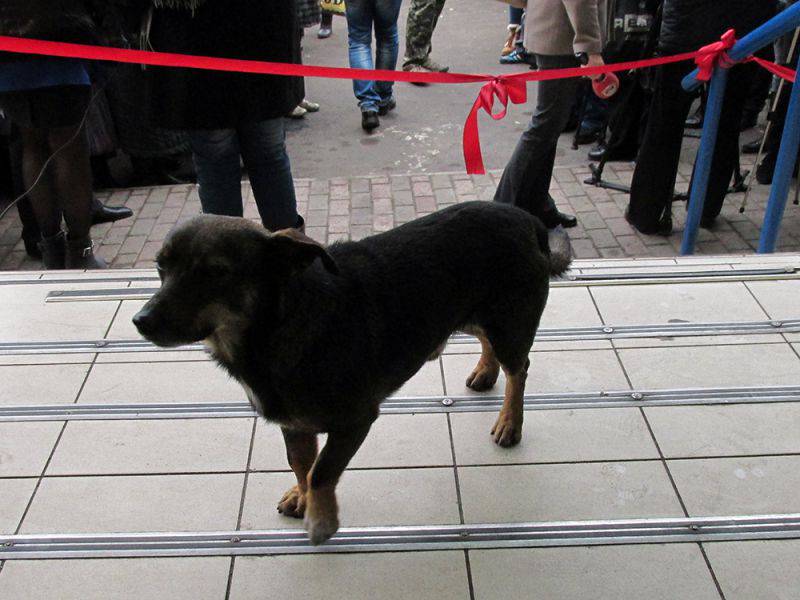 The appearance of the Head was greeted with a storm of applause. The youth unfolded the banners of the DPR and the organization "Young Republic". 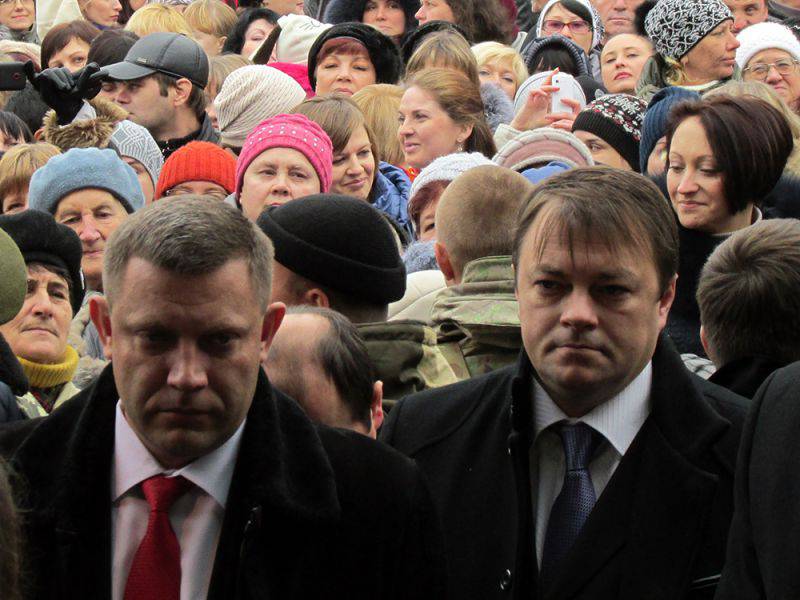 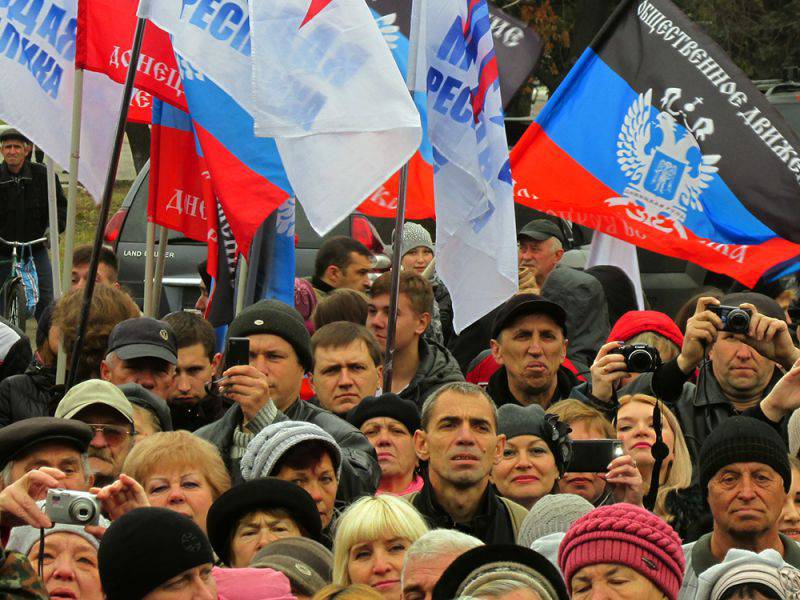 Taking up the microphone, Alexander Zakharchenko said: “This store is one of the indicators that we care about lowering the prices of products. The first republican supermarket is an enterprise that is obliged to provide people with products at affordable prices. Such shops will be open in every city. ”

“And this city is for us,” he continued, “a symbol of resilience, a symbol of struggle. In fact, it is a Hero City. ” 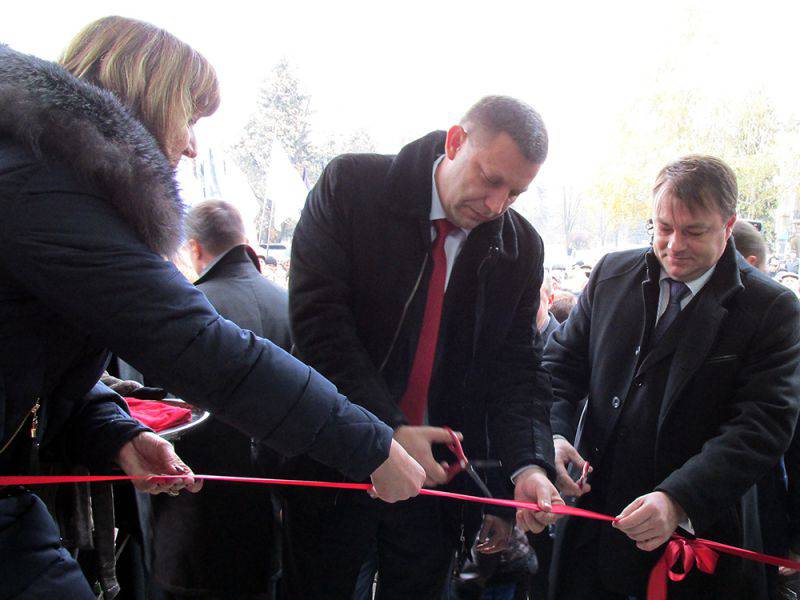 When the red ribbon was cut and the doors of the store opened, the Head of the Republic went inside. The people rushed after him. I almost had a crush, but security officers quickly took control of the situation.

However, Alexander Zakharchenko was to take part in other events. In the same place, in the center of the city, a large stone covered with a film was already visible. From now on, this stone is destined to perpetuate the memory of Debaltseve defenders who died in the new war ... 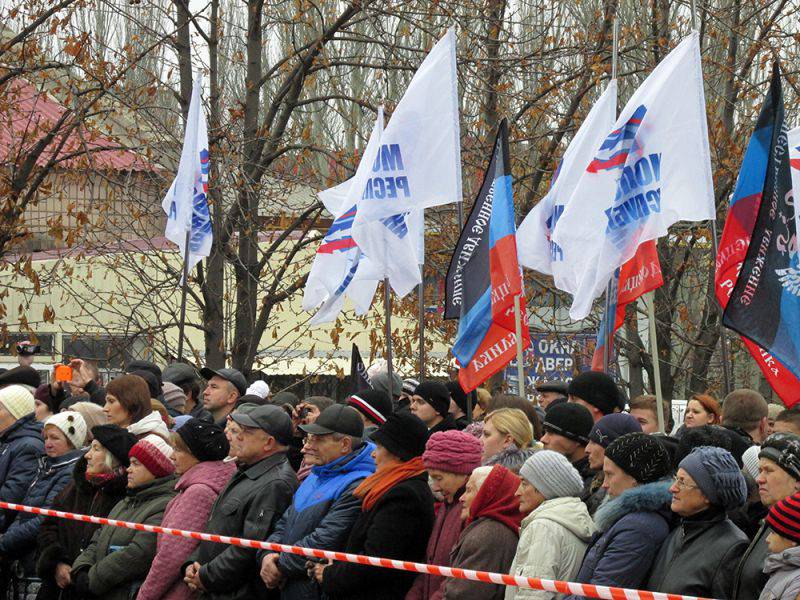 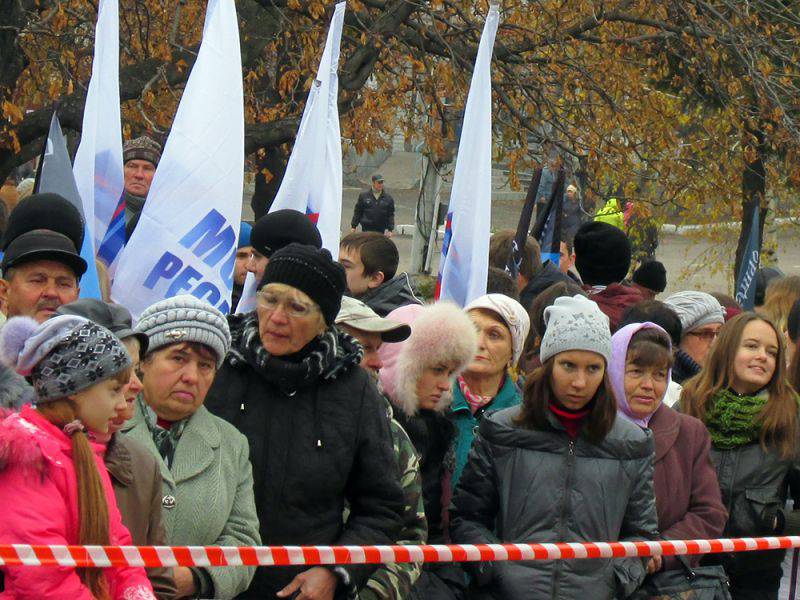 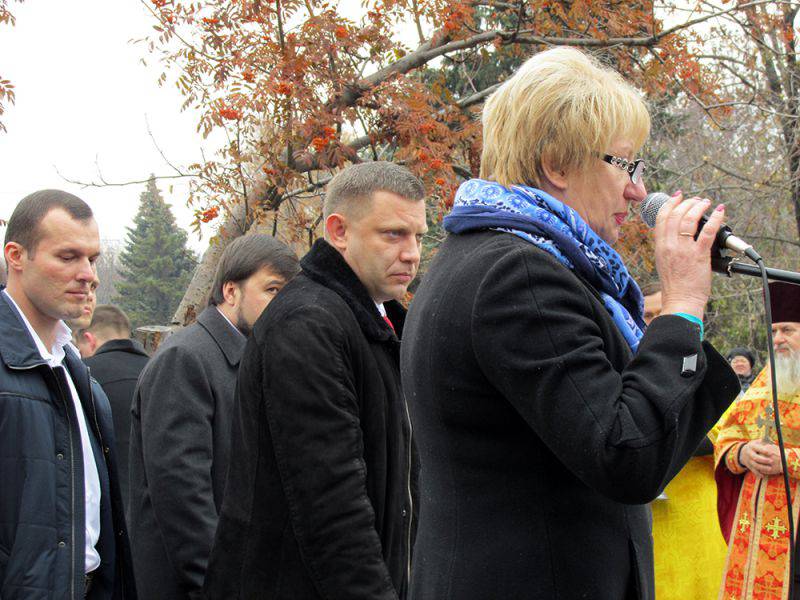 Speaking at the opening of the memorial, Alexander Zakharchenko said: “Dear residents of the city! The whole Republic must bow before you. For one simple reason, you suffered what many have not even seen. ”

The head of the young state cited an example of an old man who killed an enemy with an ax: “He, in fact, maybe doesn’t care if there is a Donetsk Republic or not. He fought for his house, he fought for his land. We all fought for our choice - the choice to be a free people, which has its own opinion and can say it to anyone's face. We are united by one thing: we are all residents of Donbass. In 2014, we said: “No to the Nazis, no occupation!” They threw against us Tanksartillery. Occupied half of our country. But we have our own character - Donbass. “No enemy could understand or defeat this character.”

Zakharchenko added: “In your hands is government. In your hands - this city. And you yourself must make it the way you want to live. If Ukraine 20 has destroyed this city for years, then you will be able to restore it ”. 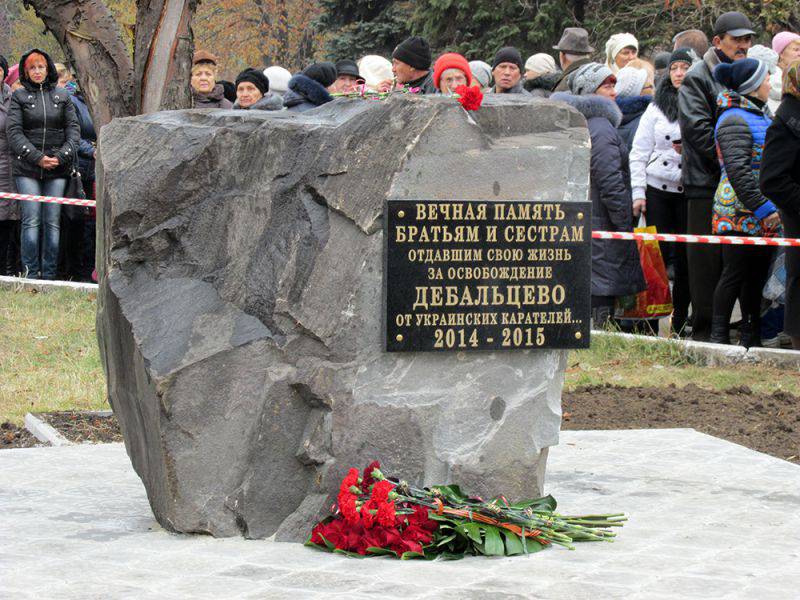 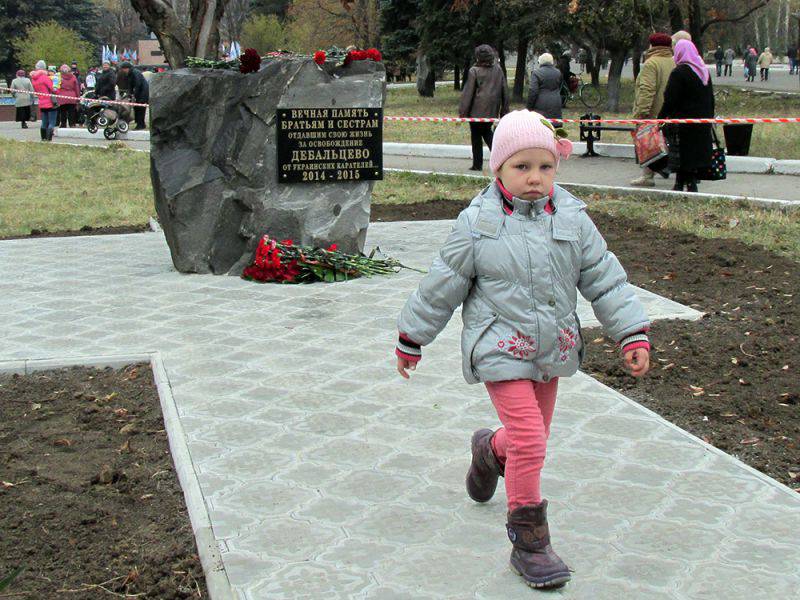 Flowers were laid on the stone. Then they all moved to the nearby Glory Memorial, erected in honor of the fallen in World War II. Not by chance, oh, not by chance, these two monuments are now near!

For a long time, the Eternal Flame did not burn at the Memorial of Glory. Now, finally, he lit up. The head of the administration, Debaltsevo, Alexey Granovsky, commented on this event as follows: “Today we have restored and repaired the Eternal Flame. It symbolizes the connection of generations - those generations who fought for the city of Debaltseve ... 2850 people - civilians and soldiers of the Red Army - laid down their heads for the liberation of Debaltseve in the distant 1943 year. And they are spiritually connected with those who died here in 2014. The eternal flame is a symbol of the revival of the city. Debaltseve, like a phoenix from the ashes, will be reborn. ” 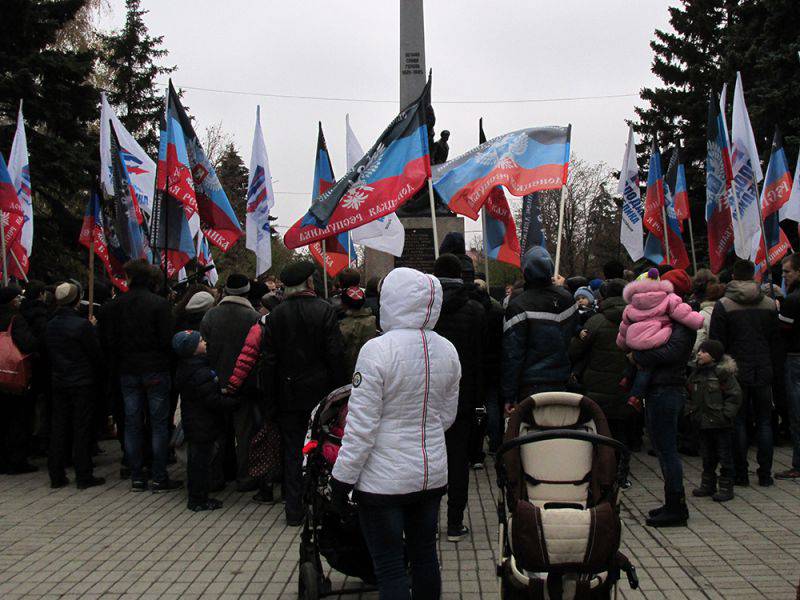 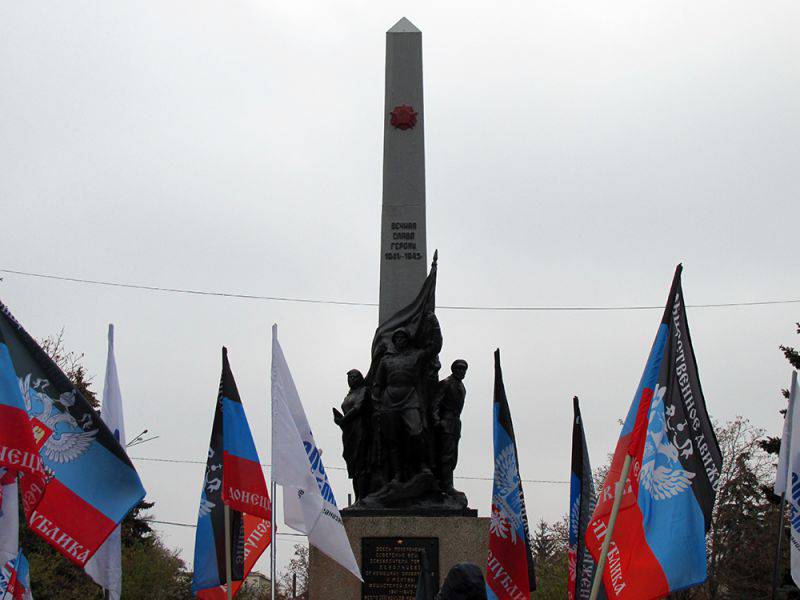 The memory of the heroes was honored with a minute of silence. Zakharchenko thanked all the veterans and said that their stories, as well as all the accumulated knowledge and experience, must be passed on to future generations. “If we forget about the lost heroes, then the price is worthless. We must not forget - this is basic. As long as we remember, they live. ” 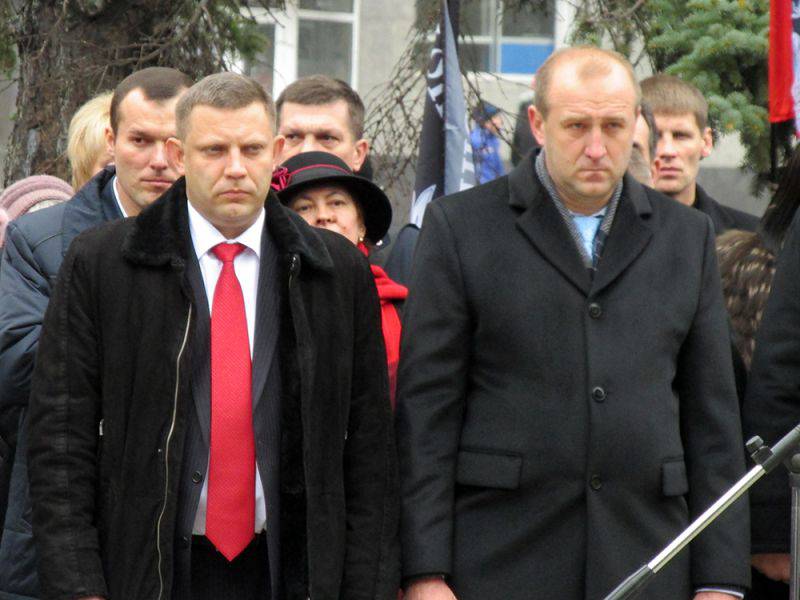 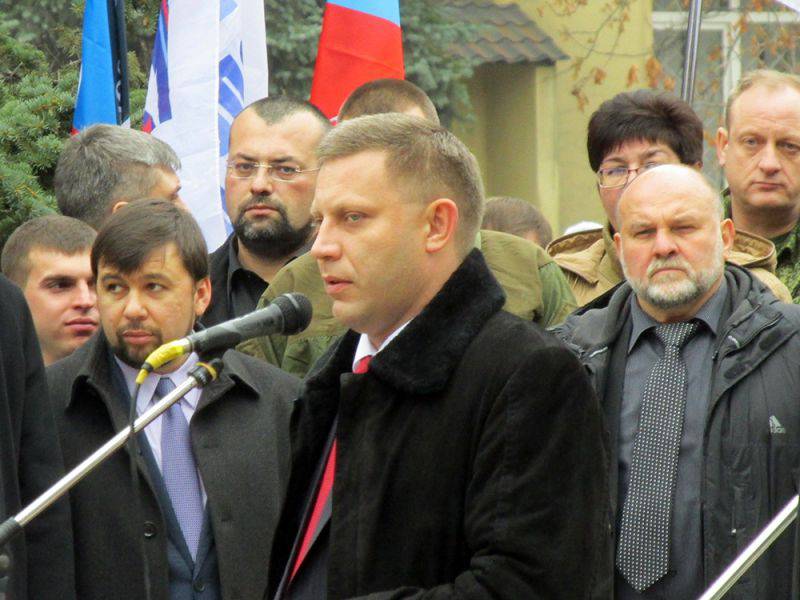 After laying wreaths at the memorial, the Head of the Republic went to the city administration building for a press conference. 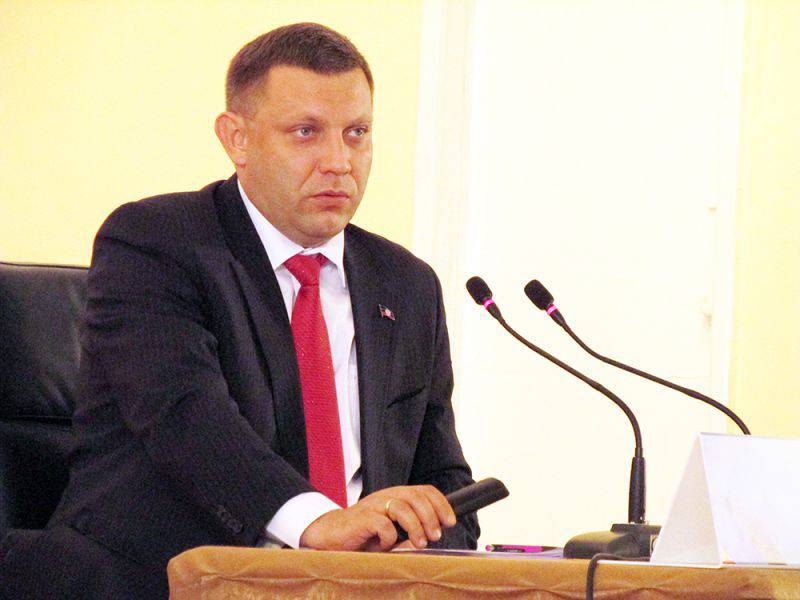 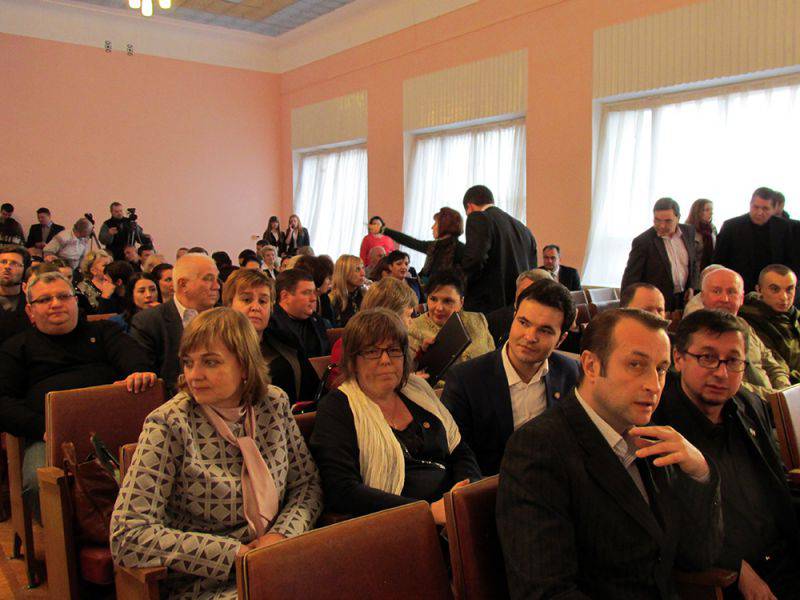 Although it was probably not a classic press conference. Because questions on it could be asked not only by journalists, but also ordinary citizens. It was their problems that were given the main attention. In the hall were almost all the ministers who connected, if the question concerned their competence. 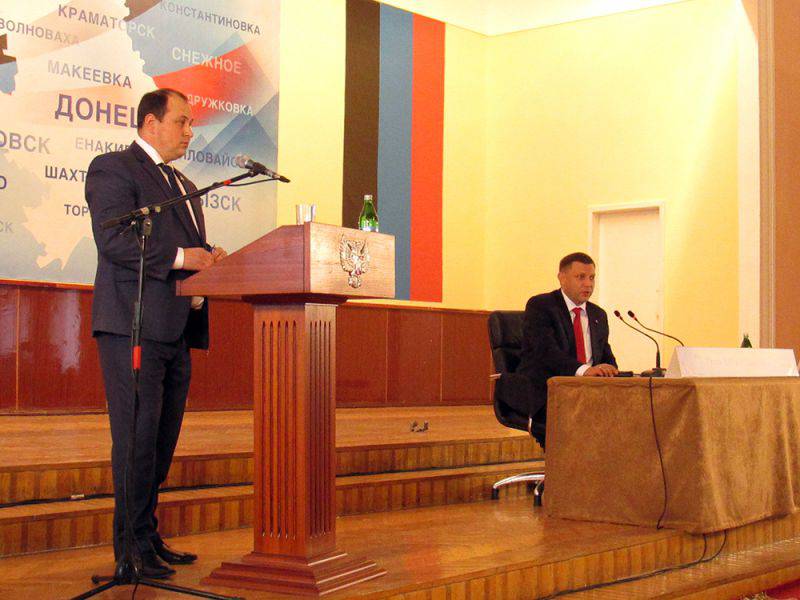 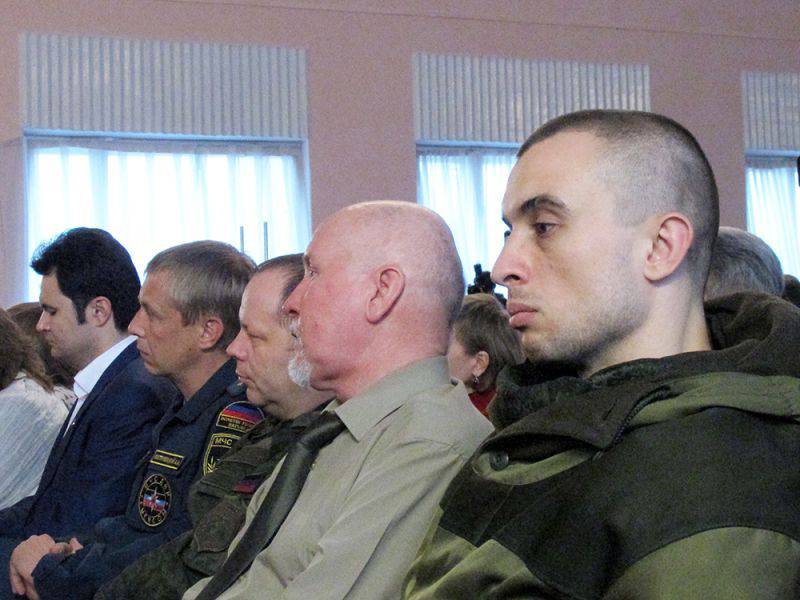 Residents of various cities of the DPR asked questions that concern them directly: the restoration of destroyed housing, coal, the work of the railway, etc. But the questions of journalists dealt with more global topics.

Many members of the press were interested in problems related to the Minsk agreements and their implementation. On this topic were asked several questions, formulated in different ways.

The head of the DPR, in response, said that the truce is only conditional, and almost every day there are provocations from the Ukrainian side: "Yesterday I personally was in the units on the front line, I heard and saw how the so-called silence regime passes."

According to Zakharchenko, the hardest thing in a war is losing friends. Even worse, when you have to tell your mother and father about the death of a son or daughter. “Therefore, we need the Minsk agreements to prevent this from happening. The greatest value in this world is human life. ”

He pointed out that Ukraine and the DPR have a completely different interpretation of the Minsk agreements. The authorities of the Republic hope to the last that they will be able to return the entire territory of Donbass peacefully.

“If we can get what we want - the establishment of normal economic, economic, diplomatic relations - we need agreements. However, I repeat, the Minsk agreements do not mean dragging out any processes that could lead the Donetsk People's Republic back into the sphere of influence of Ukraine, ”the head of state added.

Another question from journalists concerned the statements in the style of "Putin merged", "All is lost", etc. Zakharchenko said: “Such conversations irritate me. Those who say so do not see Donbass own will ... They think that the fate of Donbass is decided somewhere outside of it - in Moscow, Washington, Berlin, Paris ... Do we agree with that? We expressed our will in the referendum and weapons in the hands they defended the right to decide their own fate. ”

The humanitarian activist in the room asked the head of the DPR a question regarding the deprivation of accreditation of some international humanitarian organizations in the DPR and LPR. To which Alexander Vladimirovich reasonably remarked that among the members of these organizations, there were several people who reported secret information to the enemy.

“We don’t need such help when they give with one hand, and with the other they commit actions that take many lives,” he stressed.

The touching moment was the performance of one teacher, who thanked the authorities of the Republic for all that was done for the children. After that, several young residents of Debaltseve handed memorable gifts to the head of the DPR. 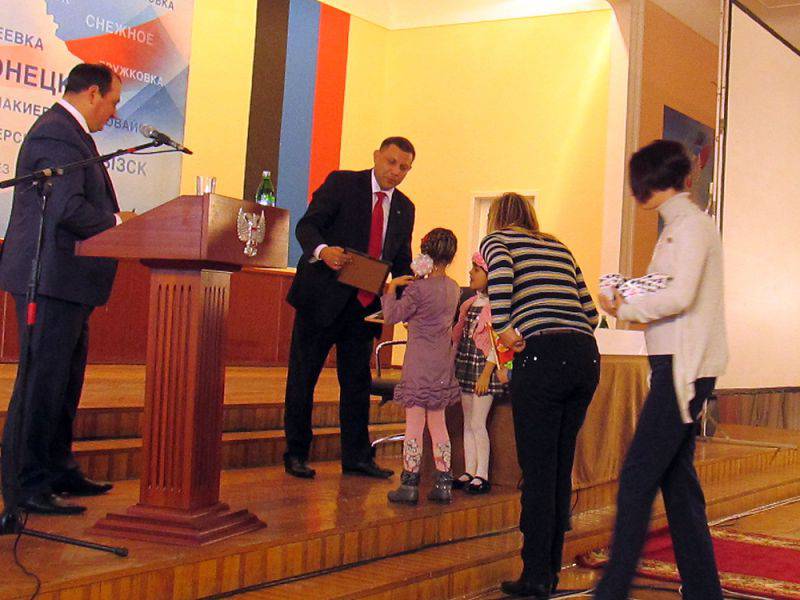 At the end of the meeting, Denis Pushilin came to the podium and announced that the deputies of the People’s Council had decided to award Alexander Zakharchenko with the medal “For Labor Valor”. 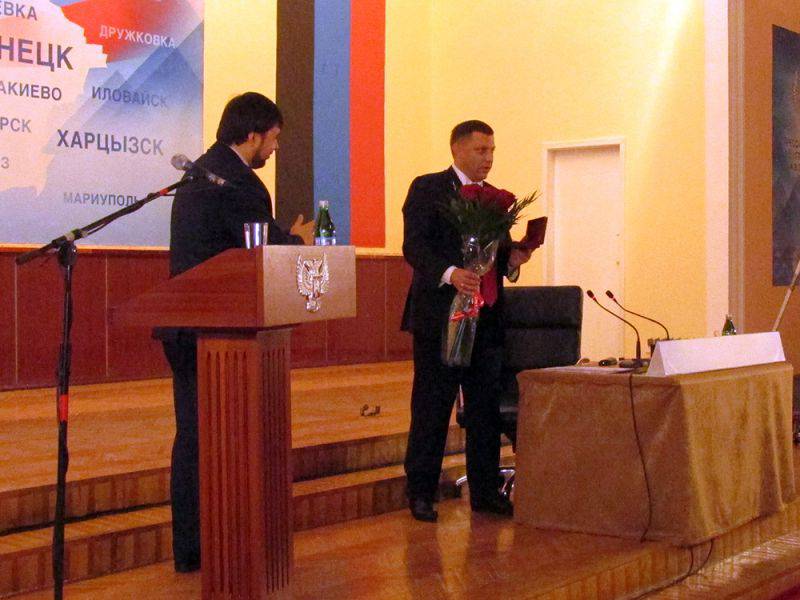 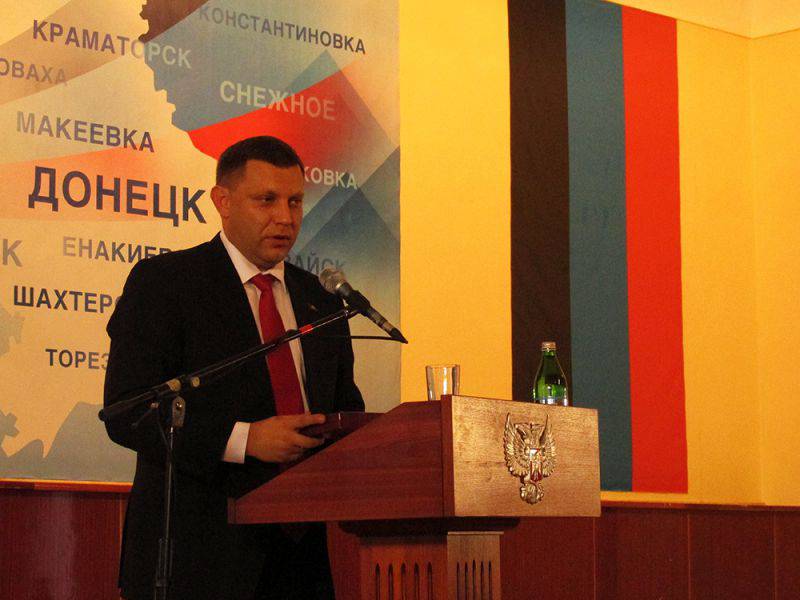 In response, the head of the DPR said that he had the right to veto such a decision, since his merits can be assessed only on the basis of all his work.

“Let's do this. I will ask to leave this award in the National Council. When we sum up the results of all our work, then it will be clear whether we put it on or refuse, ”suggested Zakharchenko.

A flurry of applause sounded in response.

Ctrl Enter
Noticed oshЫbku Highlight text and press. Ctrl + Enter
We are
Memory sake. In the Donetsk Museum of the Great Patriotic War, a diorama of the battle at Saur-Grave openedWinds over Saur-Grave
Military Reviewin Yandex News
Military Reviewin Google News
11 comments
Information
Dear reader, to leave comments on the publication, you must to register.