The Truth About Creating an Atomic Bomb (Asahi Shimbun, Japan)

November 6 2015
14
Why did the USSR rush to develop nuclear weapons. 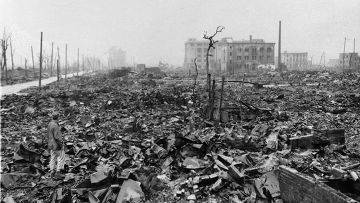 The atomic bombing of Hiroshima and Nagasaki, which the United States carried out in August 1945 of the year, gave birth to the Mayak nuclear plant in far away Russia. The USSR also had an atomic bomb at its disposal, so the United States could not retreat. This led to a nuclear race between the two superpowers, with the result that mankind got as many nuclear bombs in its hands as it is more than enough to destroy all life on Earth.

Hence the question: if the USA did not use nuclear weapons, would the USSR start developing it?

Having prepared the material, I returned to Moscow from Chelyabinsk and met with Alexei Kirichenko, who is engaged in history Russian-Japanese relations. Previously, he worked in the counterintelligence department of the KGB and was responsible for Japan. Alexey is the author of the book “Little-known moments of the 200-year history of Russian-Japanese relations.” He is also well versed in the issue of nuclear weapons.

He told me the following: “The USSR began to fully develop the development of nuclear weapons in 1943. He managed to get the relevant materials through spies. And the fact that the United States used nuclear weapons forced the USSR to accelerate development. ”

At the end of 1938, the process of nuclear fission was opened. After that, Nazi Germany began research related to the production of nuclear weapons. The fear of these developments led to the emergence in the United States of the Manhattan project, which was thrown into enormous human and financial resources. In 1943, the USSR also began developing nuclear weapons. The team of scientists led by physicist Igor Kurchatov. The 1945 summer of the year showed that the United States was ahead of the USSR, which caused irritation in Moscow. The USSR was four years behind the USA. Only in August 1949, he was able to conduct successful nuclear tests.

Perhaps, if the US did not use nuclear weapons, the USSR would also not hasten to rush its development. David Holloway’s Stalin and the Bomb contains the following observations:

“Stalin immediately put the nuclear project on a new track. He began to take the bomb seriously, not because it finally reached the councils of scientists, but as a result of the demonstration of the strength of the bomb by the atomic bombings of Hiroshima and Nagasaki. ”

“A new and terrible weapon began to turn over the balance of power that emerged at the end of the Second World War. Stalin tried to restore this balance through the earliest acquisition of nuclear weapons. "

Kirichenko notes the following: “There was no need to drop atomic bombs. It was a retribution for the attack on Pearl Harbor, as well as a warning and a threat to the USSR. ”

There is a theory that atomic bombing saved the lives of 500 to thousands of American soldiers. According to Kirichenko, this is an absurd American myth. “Japan was exsanguinated. There were no bullets or food. Japan made a big mistake. If she had adopted the Potsdam Declaration in July 1945, there would have been no atomic bombing or an attack by the USSR on Japan. ”

The USSR has created an extensive spy network in the main countries. Richard Sorge reported on the activities of the Japanese government. In fact, after the atomic bombings, Moscow sent its agents to Hiroshima and Nagasaki faster than the United States. The USSR wanted to verify with its own eyes the destructive power of nuclear weapons that it could not yet create.

This assignment was entrusted to Mikhail Ivanov, who died last year at the age of 101. At the end of the Second World War, he worked in the Soviet embassy in Tokyo. Ivanov was an employee of the GRU. He also contributed to the activities of Sorge.

In an article published last year, I talked about what Ivanov saw after nuclear strikes. He was forbidden to talk about what he had seen, but there is a person who fully owns this information. This is a former KGB officer Kirichenko.

I asked him a question that worried me for a long time.

“Ivanov visited Hiroshima and Nagasaki before American agents. He prepared a report and sent it to Stalin. In my opinion, he should have been given the order for this, but this did not happen. Why?"

Kirichenko replied: “What is the order there! He was nearly fired. ”

Ctrl Enter
Noticed oshЫbku Highlight text and press. Ctrl + Enter
We are
"Lighthouse of Freedom." Great Cuban gone undefeatedThe victory over Japan was not won by a bomb, but by Stalin ("Foreign Policy", USA)
14 comments
Information
Dear reader, to leave comments on the publication, you must to register.