22 seconds before the crash


The death of the A-321 aircraft, which operated flight 9268 from the Egyptian Sharm El Sheikh to Pulkovo with 217 passengers and seven crew members on board, became the largest aviation disaster in stories Russia and the USSR. In the Soviet Union, the worst accident occurred in the area of ​​Uchkuduk 10 July 1985. Then, as a result of the fall of the Tu-154, flying from Karshi to Leningrad, the 191 passenger and nine crew members were killed.

The death of the Kogalymavia (Metrojet) flight 9268 from the very beginning was accompanied not only by unverified information, but also by explicit throw-ins. In the first hours after the tragedy, Arab news agencies reported, referring to some rescuers operating at the crash site, that А-321 collapsed when falling into two large parts and even groans and calls for help were heard from the tail section. A little later, some representatives of the "Islamic State" claimed responsibility for the terrorist act on board the Russian aircraft. This statement was immediately picked up by foreign and some of the domestic media.

Let's try to figure out what happened in the sky over the Sinai October 31.

On the fateful day, the Airbus A-321 flew out of the Egyptian airport at 6 hours 51 minute Moscow time (3.51 GMT), but already at 7.14 (4.14) it didn’t contact Larnaca airport, and a few seconds earlier the flight disappeared from radar screens.

As a result of the search and rescue operations that have begun, it was established that the wreckage of the aircraft, scattered over the area from 16 to 20 square kilometers, has characteristic signs that the Airbus had already collapsed in the air. Recall that the wreckage of the Malaysian "Boeing-777", following the flight MH-17 and killed over the south-east of Ukraine, spread over the square more than 50 square kilometers. Already on November 1, the Rosaviation and the Interstate Aviation Committee confirmed that the destruction of the А-321 occurred still in the air.

At this moment, despite the fact that the flight recorders, they are also “black boxes”, are not only found by the rescuers, but are already deciphered, data on the flight parameters of the A-321 “Kogalymavia” are available only from the Internet service FlightRadar24. 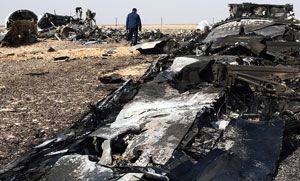 If we sum up the intermediate total, then in fact the 22 seconds the plane tried to stop the fall and go on to climb, while every time it failed. But then its vertical speed increased to such parameters that the car reached the maximum angles of attack and, accordingly, beyond-limit overloads. Next - the fall and destruction of A-321.

Note that the figures for the vertical speed obtained from the data processing service FlightRadar24 and in reality could be lower.

In the media, there was a message that the crew of the aircraft allegedly turned to air traffic controllers for help. According to some reports, he reported a certain malfunction; according to others, he requested permission to land. But both the Egyptian and Russian authorities deny that such a conversation took place.

In the first hours after the tragedy, there was evidence that the deceased A-321 had problems with the engines, which the pilots repeatedly reported to their management. True, the representatives of the carrier announced in the evening of 31 in October that there were no calls, the airliner promptly passed all maintenance work.

The Observer of the Military-Industrial Courier managed to communicate with employees and staff of companies operating similar passenger liners, as well as representatives of the Russian government agencies responsible for control in the aviation sector.

Most of the interlocutors stated unequivocally that they would not draw conclusions at least until the decoding of the flight recorders would be announced, but agreed to give an explanation of the facts already available. 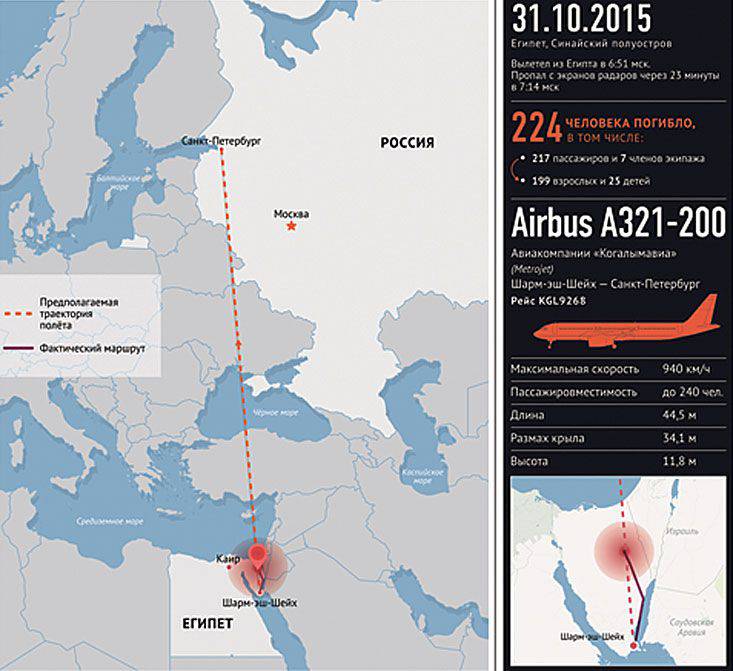 Judging by the data from aviation-safety.net, although there has been a sharp decrease in speed, it is hardly possible to talk about the problems or failure of one of the IAE V2500 engines. In this case, the plane could not move several times into a climb before falling. According to one of the representatives of the airline - operator A-321, this at least indicates that not only the power plant kept the craving, but also the motor automation worked.

We can say that during the 22 seconds the autopilot of the airliner tried to fend off what, in the words of one interlocutor, “it was almost impossible to fend off”. But then, instead of stabilizing the liner, the automation, unable to cope, transferred the plane to an abrupt climb, leading to transcendental overloads, reaching critical angles of attack, stalling (possibly a corkscrew) and destruction of the structure.

The causes of the impact that led to the death of the “Airbus” can be either mechanical problems with elevators or a stabilizer, or the failure of the automation itself, also called EDSU (electronic-remote control system). It is not excluded that the pilots, faced with a malfunction in the control system, tried to hold the plane on their own, parrying the impact.

But the mechanical failure of the rudders or stabilizer could only lead to a plane crash. Climb in this case is unreal. And at least a partial failure of the control system causes the occurrence of so-called self-oscillations, which are very similar to the above data on vertical speed.

True, almost all of the respondents with the failure of EDSU were still questioned, pointing out that during the operation of А-321 this was not the case, and the Airbus control system itself is very reliable and its most important elements are duplicated.

Representatives of the industry were skeptical enough about the possible defeat of an aircraft from anti-aircraft missile systems, as well as undermining the device aboard the terrorists. A rocket hit, as the example of the Malaysian Boeing-777 showed, would have led to an instantaneous destruction of the structure and a fall of the aircraft’s remnants over a fairly large area, the same can be said about the application of the VCA.

The tragedy of the 9268 flight is still waiting to be investigated. Data on the flight recorders has not yet been published, debris is being collected. Allocation of A-321 remains ahead, but now not only experts of varying degrees of awareness, but even various officials point out that the crashed liner survived four owners and the 18 car for years - this is not the place in the fleets of Russian carriers, it is necessary to raise the domestic aviation industry .

The A-321 is the largest aircraft of the A-320 family, considered the record for the number of cars produced and operated. "Three hundred and twenty-first" is able to transport from 170 to 220 passengers for distances up to 5600 kilometers. At the same time, the Superjet takes from 98 to 108 passengers at a distance of just over three thousand kilometers (or 4500 in the Long Range version). Theoretically, the closest figures to the three hundred and twenty-first ones put into operation in 1994 year should be with the newest Russian MC-21, whose first flight has not yet taken place. The Tu-204 / 214, also capable of carrying more than 200 passengers to a range of six to seven thousand kilometers (depending on the model), are operated by only a few airlines (the largest fleet of Russia and Red Wings are 12 and 8 machines respectively).

Alas, one thing is already clear: the tragedy of the 9268 flight will be used for any loud statements for a long time, and the rise of the domestic aviation industry requires painstaking, hard work.

Ctrl Enter
Noticed oshЫbku Highlight text and press. Ctrl + Enter
We are
What you didn't want to know about EnglandWhat we lost
Military Reviewin Yandex News
Military Reviewin Google News
190 comments
Information
Dear reader, to leave comments on the publication, you must to register.