How extremist organizations, under the slogans of "protecting Muslims" and under the guise of "political parties", continue to operate in Russia

November 3 2015
25
Not so long ago, "Military Review" published material, which provided information about the real people behind the dissemination of personal data of Russian pilots involved in the counter-terrorist operation in Syria. The material presented facts confirming a clear interest in the dissemination of such information by representatives of the American intelligence conglomerate, in the post-Soviet space using the central office of the Security Service of Ukraine in Kiev. At about the same time, material appeared published by the CyberBerkut team. The material presented a scheme of interaction between American stakeholders and Ukrainian, if I may say so, svidomitskimi Internet resources, declaratively launched on behalf of the deputy of the Verkhovna Rada of Ukraine Anton Gerashchenko, acting as adviser to the Minister of Internal Affairs of Ukraine Arsen Avakov. We are talking about such extremist portals as "InformNapalm", "Peacemaker" and the like. 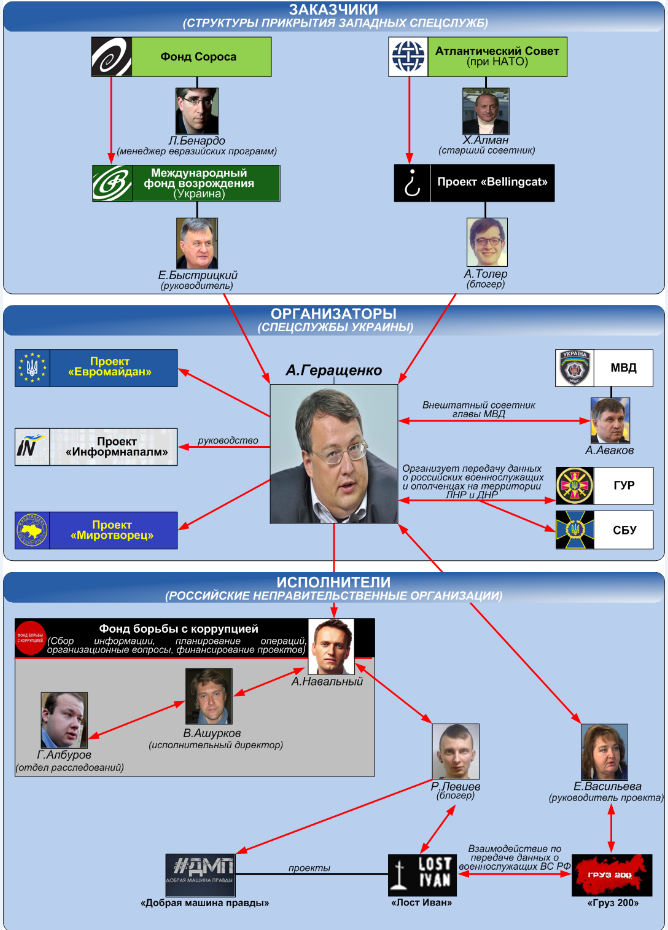 But attempts, as they say, to bite Russia by hook or by crook are far from being carried out only by “Geraschenkowski falcons”. A whole system works, which has been thoroughly settled in social networks, and which sets as one of its goals the conduct of a frank information (disinformation) war with the Russian Federation, with the authorities and the people of Russia.

One of these offices, which, despite the ban in the Russian Federation, continued, as if nothing had happened to spoil things on Russian territory, recently passed through the competent authorities of the Moscow region. This organization is Hizb ut-Tahrir al-Islami, which calls itself an “international political party,” whose party spirit is reduced to very aggressive attempts to incite Muslims to create a “global Caliphate” with no less aggressive attempts to convert non-Muslims into Islamic religion. By decision of the Supreme Court of the Russian Federation of February 14, 2003, Hizb ut-Tahrir was recognized as a terrorist organization with a simultaneous ban on any of its activities in the country. Adherents did not heed the prohibitions ... And later 12 years after the court decision, the shop not only failed to collapse, but even in a certain sense activated its destructive activity.

According to operational data, members of the “party” who were detained in the Moscow region, distributed extremist literature and recruited to the so-called “Islamic Caliphate”. Moreover, representatives of the group, among whom were citizens of Tajikistan, actively resisted Russian law enforcement officers.

As soon as the detention was carried out, the social networks, in which, as it turns out, a whole team of representatives of a radical organization engaged in the propaganda of extremist activity, emerged with poisonous saliva. The main direction of dissatisfaction: we, you know, the party members, and, you know, we are under pressure with the use of power structures, and, therefore, the guard !!! - there is no democracy in Russia, guard !!! - “political party” is deprived of its freedom of action ...

So that there are no illusions about the direction in which they try (as far as possible, of course) these, excuse me, “party members”, it is enough to study more closely those publications that followers of this trend spread on their pages on social networks. It should be noted here that in Russia, user access to the Hizb ut-Tahrir website, as well as to the groups of this office in social networks is blocked. However, the real extremist rampant reigns, for example, in the Ukrainian segment of the global network. This segment of the Tahririans, who are without “Sharia Law” neither in Russia nor in Ukraine (and our countries seem to be secular), have lived, you understand, are not able to take a long time to take a fancy. But, as they say, they cannot - these are their problems, but after all, “Tahrir”, like any totalitarian sect, declare their rights to the souls of other people, who, in their understanding, must also “non-Sharia” reality and go on to build a “Caliphate” on one sixth of the land.

So, what exactly are representatives of the organization banned in Russia trying to spread through their social media accounts? The first thing that catches your eye is a whole selection of materials shot by militants in Syria, which say, "how many schools, hospitals and mosques bombed Russian planes aviation". Moreover, the distribution is very original way. Social media users calling themselves Hizb ut-Tahrir friends are fishing these fake videos in YouTube, videos after a while the representatives of the video publishing service are deleted, but on the pages of "tahrir" the information continues to not only hang, but also to more than actively proliferate.

As an example: post as a user. Nurie zudievaincluded in the friendly circle of Hizb ut-Tahrir: 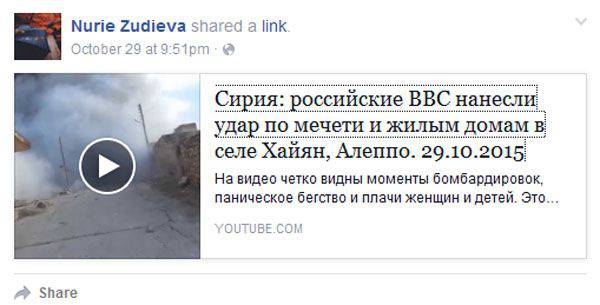 The lady, who, as she reports about herself, from Bakhchisarai (Republic of Crimea, Russian Federation), and who, according to Muslim traditions, would be engaged in children and the family hearth, suddenly became concerned with the actions of the Russian Federation Council in Syria. At the same time, the lady derives “information” exclusively from those resources that represent both Russia and the Syrian President “incarnations of bloodthirstiness” - from the resources of the militants operating in Syrian territory. It is enough, as it turns out, for the ladies to have time for the publication of the cartoons that speak of the brainwashed in a certain direction, depicting Bashar al-Assad as the "murderer of Syrian babies." 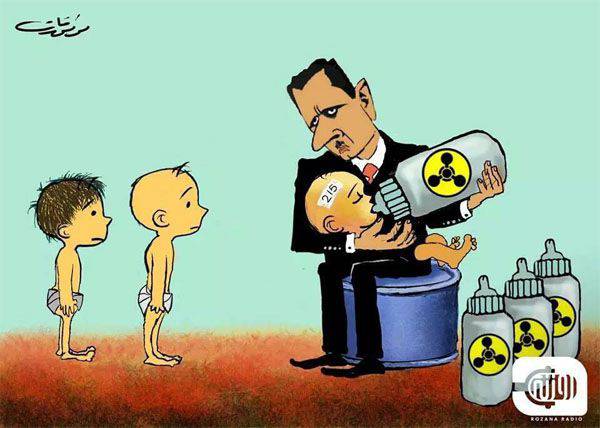 On Mrs. Zudiyeva's page, there is information about her marriage with a man like Fazyl Amzayev, whose Facebook banner has the image of one of the protests of the extremist organization Hizb ut-Tahrir. On one of the posters, and it is shown in the foreground, the inscription: "Russia, stop your atrocities against Muslims." When meeting Mr. Amzaev’s page, it turns out that he, no less than nothing, is “the head of the information office of Hizb ut-Tahrir in Ukraine” (this information was published by Amzaev himself on Facebook). Even more interesting is the moment that Mr. Amzayev lives in the same Bakhchisarai (Republic of Crimea, Russian Federation), which he himself calls exclusively a Ukrainian city.

What Hizb ut-Tahrir adept Fazyl Amzaev spreads through his page. For example, the slogan that sounds like “Islam is prohibited in Russia! What did you do in his defense. ” Or "Stand up to protect the Muslims of Tatarstan." In Tatarstan, there are quite a few acquaintances who profess Islam, but they have never heard from them that they need to be defended, and that their oppression has no limits. In this regard, it is safe to say that a resident of Bakhchisarai, who is a native of Uzbekistan, spreads frankly extremist slogans through social networks.

And here’s a list of people who call themselves representatives of Hizb ut-Tahrir Russia’s Media Office (that is, the media office works, as it turns out, not only from Russia and the former Soviet republics, but also from abroad):

Ozodbek Aliyev (Bishkek, Kyrgyzstan),
Shoakmal Imomnazarov (Tashkent, Uzbekistan),
Abu Ziyovuddin Abdulloh (Stockholm, Sweden).
Idris Isaev. And this is generally an interesting person, if only because he lives in Moscow, and, judging by the activity on the social network, at the time of preparing the material, he was overlooked by the work of the competent authorities in the Moscow region in mid-October. By the way, he is also a graduate of Moscow State University (not a philosophical one, a case of a faculty ...) - at least Mr. Isaev himself indicates this institution on his page. What does Mr. Isaev spread through the social network? Yes, all the same that spread his "party members." For example, another fake about hitting the "Russian bomb in a hospital in Syria." 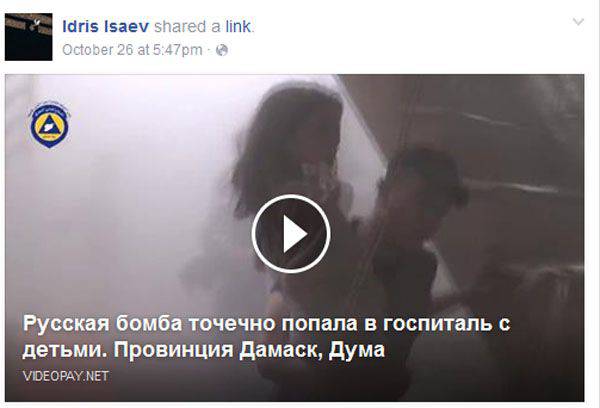 In spite of the fact that this newspaper duck was refuted dozens of times (and even Western media from among the “friends of Russia” denied it), Mr. Isaev, a graduate of Moscow State University, does not seem to care much. He cares little, for he and those like him have completely different tasks.

And in fact, the data presented on the "party" activity of the organization under consideration is just the tip of the iceberg. What, then, does this iceberg of the “friends of Russia” have an underwater part? ..

Ctrl Enter
Noticed oshЫbku Highlight text and press. Ctrl + Enter
We are
Who is behind the persons who publish personal information about the Russian pilots involved in the counter-terrorist operation in Syria100 Thousands of military personnel are brought into combat readiness in the Far East
Military Reviewin Yandex News
Military Reviewin Google News
25 comments
Information
Dear reader, to leave comments on the publication, you must to register.