Putin fixes the multipolarity of the world 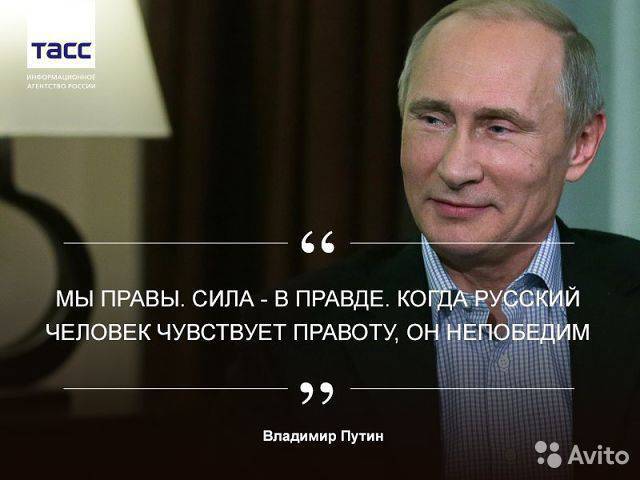 Traditionally, it is assumed that in his "Valdai" speeches, Vladimir Putin appeals to the western political elite. There is a rational grain in this approach, since the Valdai Club was created precisely as a platform for communication between the Russian and Western establishment. However, this year the western vector of this site was finally broken. Putin clearly and unequivocally appealed to the whole multi-polar world, incidentally hitting several topics that are of great concern to the most passionate part of the Russian audience.

Putin is very often criticized for not creating a new state messianic ideology. It seems to critics that without such an ideology, the country cannot function normally and, moreover, cannot win in global competition, since Russia allegedly has nothing to offer in return for pseudo-liberal values, the primacy of the United States, and Hollywood cultural dominance. Putin is literally required to receive the Ministry of Propaganda, which would tell the citizens of Russia and the world about why they should live and why they should die. We are very lucky with the president. Putin again and again refuses this poisoned path and does the right thing.

Imagine yourself an Indian engineer. Submitted? Are you waiting for some Russian leader to tell you urgently about the meaning of life and give you an ideology that will lead you to a bright future? Probably not. Imagine yourself a Chinese official. You probably also do not look at Russia in anticipation of obtaining some kind of ideology, which tomorrow will change your life for the better. Exercise can be repeated to infinity.

Even more than our home-grown turbopridoti, our Western opponents are waiting for the emergence of such a messianic ideology. Then it will be very convenient for them to once again put on a mask of the defenders of the world from the next "global threat", and it does not matter what color and size it will be. Any messianic idea - no matter red, white or pimply - certainly leads to the emergence of a global coalition of those who will not accept this idea and will be ready to die in order to not submit to it. Actually, the United States is facing this problem. The US opponents on the world stage have little in the ideological sense, but the general rejection of the “American set of values” is quite enough to create a very active anti-American coalition.

Putin once again marked the main value of the ideology that Russia offers to the world. Messianism in it is zero point and zero tenth percent. It is not necessary to propagandize it, since it is natural. This ideology does not need politruki and PR. It does not contain promises and recipes for a brighter future, just as it does not contain any prescriptions, except for one thing: the freedom for each country and civilization to choose its own way, without external dictation and violence.

Against the background of the world’s tired idea of ​​the American exclusive right to impose its own political, economic and cultural standards on everyone, the Russian commitment to freedom looks fresh and even revolutionary. The bright future is presented to all in different ways, but freedom from external intervention is a very clear and absolutely universal value that can unite and already unites the most diverse countries, regimes and peoples.

In this context, Putin’s statement about the unwillingness to “democratize the USA” - although there are all reasons for this - does not look like trolling, but as a manifestation of principle. Putin shows that words about non-interference are not an empty sound, not a diplomatic ploy and not an element of double standards.

In terms of the art of diplomacy, Putin is lucky. The rare world leader has the opportunity to use the truth as weapon. The Anglo-Saxon world is so much entangled in its own lies that effective public discredit requires nothing but the truth. The Russian leader is in a position in which he can afford the luxury of speaking this truth. Even more to spoil relations with the irresponsible part of the American establishment is simply impossible, which means you can publicly talk about how the United States supports terrorists, attacks European vassals and lies about European missile defense. “The king is naked,” the Russian president seems to say, hinting transparently that Uncle Sam, who has gone mad, has already lost the crown.

In strict accordance with the changed disposition of the global chessboard, Putin put the necessary emphasis on the situation in Syria:

1. There will be no section;

2. "A moderate opposition" Moscow itself will find, mock up, teach good manners and organize "political reconciliation" in the best possible way;

3. With the Americans, most likely, a certain agreement will be reached in terms of further work in Syria. Along the way, Putin hinted that the Obama administration is forced to act toughly at the official level, along the way justifying itself in front of Moscow. Putin’s key quotation: “We suggested that the military delegation should come to Moscow at the first stage, and then I said that we are ready to send a delegation at a high political level headed by the Prime Minister of the Russian Federation ... but we were told that our proposal However, the American colleagues later made an explanation at the oral ministerial level that they did not understand very well and that the road was nonetheless open, and we can go this way, we can and should think about joining efforts. " For those who are familiar with a brief description of intraelite conflicts in the USThe reasons for this seeming inconsistency will be easily explained.

It is significant that Putin’s plan on Syria was supported by the speaker of the Iranian parliament, Ali Larijani, whose presence in Valdai is a symbol of the evolution of Russian-Iranian relations. Larijani himself is a vivid illustration of the quality of the Iranian political elite: cybernetics, engineer, philosopher, intelligence officer, former communications minister, ex-chairman of the Iranian Security Council, speaker of the Iranian parliament and politician in one person. Watching the performance of this representative of “smart theocracy”, which is tearing American templates to shreds about how an Iranian politician should look and speak, one can congratulate the Kremlin on finding very promising partners with whom there is something to talk about and what to plan for the long term. Subsequent statements on joint projects on 40 billions of dollars and negotiations on the creation of a Russian-Iranian investment bank are a natural consequence of the Russian-Iranian rapprochement.

On the question of Ukraine: Putin once again pointed out that the Kremlin’s efforts to work with Europe are yielding results:
"They unequivocally support the Kiev authorities, but still, in my opinion, quite objectively assess the situation and already understand that the problem that exists there is not two colors: white and black. Everything is much more complicated ...".

They will continue to put pressure on Kiev in order to implement the Minsk Agreements, which are absolutely unacceptable for Kiev (and Washington).

Despite the screams of pseudo-patriotic hysterics who would like to see a military conflict with the European Union or, at a minimum, a mutual trade embargo that will incredibly delight Washington hawks, the Kremlin stubbornly bends its line on Europe and Ukraine.

Along the way, Putin has buried the hopes of the “severs to shreds” sects that dream of disintegrating the Russian economy. Despite a rather active media tantrum, the Russian leader has quietly identified several key messages: the peak of the crisis is over, the ruble is stable, inflation will fall, the affected elements of the economy will be restored.

It is clear that talking good about the prospects of the Russian economy is very unfashionable, undervalued and somehow completely handy, but experience shows that Putin knows what he is talking about. This does not mean that there are no problems, but universal prosperity will come tomorrow and without effort. At the beginning of the acute stage of confrontation with the West, the President predicted two difficult years for the Russian economy, but Putin clearly does not see any reasons for panic or pessimism. In this situation, he, as always, sees a reason to work hard.

In his speech in Valdai, Putin fixed the contours of a new multi-polar world, in which Russia would occupy a special place.

Russia will become the center of power, which will simultaneously bind the East, South and West. Moscow is not only the Third Rome, but also the Great Crossroad of the 21st century. We are ready to cooperate with everyone, but if a fight is inevitable, we will strike first. Putin and Caliber guarantee.

Ctrl Enter
Noticed oshЫbku Highlight text and press. Ctrl + Enter
We are
About Stalin and KhrushchevWhat you didn't want to know about England
Military Reviewin Yandex News
Military Reviewin Google News
50 comments
Information
Dear reader, to leave comments on the publication, you must to register.