Patriarch of the Russian Aviation

Heinrich Vasilievich was born in Moscow. Before the war, he graduated from high school 8 classes. He started his career in 1943 as a laboratory assistant at the Department of Physics at MAI. In 1943 – 1949 - MAI student. 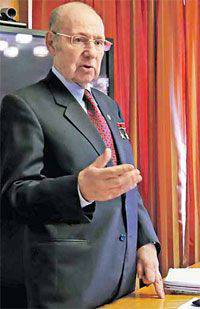 From July 1, 1948 began to work at the Design Bureau of S.V. Ilyushin as an engineer-engineer from undergraduate practice. In the department of the fuselage went up to the first category designer. He participated in the work on the aircraft IL-14, IL-40, IL-46, IL-54. He was a lead engineer in the field of construction and flight tests of the Il-54 jet bomber.

1956 – 1958 years - party secretary of the company. Since September, 1958-o - Deputy Chief Designer for IL-18 and responsible for IL aircraft in service. Participates in the development of IL-18 modifications for the Air Force - the anti-submarine IL-38, the IL-20 Strela and others.

In 1964, by order of the minister, he was appointed chief designer of category II and first deputy general designer. From now on, under the leadership of S. V. Ilyushin, begins work in the Bureau of Draft Design.

He is responsible for conducting flight tests, launching into serial production and operation of the long-haul IL-62 jet aircraft.

In September, the 1967 of the year began flying with passengers, and the IL-62 aircraft for a long time becomes the flagship of Aeroflot.

In July, 1970, at the request of Ilyushin (due to his illness and retirement on a personal application), was ordered by the order of the USSR Council of Ministers Novozhilov as chief designer and chief executive of the enterprise.

It should be noted the work on the creation of the Il-76 military transport aircraft - the first aircraft of its design. Experienced IL-76 took off from the Central Aerodrome of Moscow 25 March 1971. Adopted in 1976.

IL-76 - the first jet military transport aircraft, capable of using soil and concrete strips, became the main part of the Air Force VTA, performs all types of landing transport operations. In civil aviation carries out commercial transportation and special tasks in emergency situations. On the basis of the IL-76, many modifications have been created - the Il-78 tanker, a plane for training astronauts in zero gravity, the flying Scalpel hospital, fire fighting, etc.

In 1980, the first Russian wide-body passenger Il-86 aircraft entered the Aeroflot tracks. When creating this aircraft Novozhilov were developed and embodied in the design of new flight safety principles. In 1993, the general designer Novozhilov completed work on the creation of a new generation aircraft - the long-range wide-body passenger IL-96-300 aircraft with domestic PS-90 engines. 14 July 1993, the Moscow-New York flight began passenger traffic. Today, aircraft raids are coming to 70 thousands of flying hours.

At the most difficult time - from 1990 to 1999 the year by decision of the presidents of Russia and the United States, the general designer works on the long-haul IL-96М / T with American engines and American avionics, creates the first joint Russian-American aircraft that received a USA FAA certificate in 1999 year, not inferior to the best similar aircraft in the world.

The work on the IL-96М / Т aircraft programs in partnership with American specialists and the certification of these aircraft in the American registry, conducted for the first time, acknowledged the high professional qualifications of our designers and workers, evidence of the high level of domestic technology and the competitiveness of high-tech, complex products created in Russia .

In March, the 1990 of the year made the first flight of the IL-114 - a new generation of passenger turboprop 64-seat aircraft for regional routes with low fuel consumption. In serial production launched on TAPOiCH (Tashkent), successfully operated by the company "Uzbekistan Airways". Creating this machine, Genrikh Vasilievich Novozhilov showed a high level of creativity of the design scientist, developing simple, reliable and efficient designs that ensure a high level of flight safety, a long service life, production and operational manufacturability. He made a great contribution to the development of world aircraft.

In 1979, Henry Novozhilov was elected a corresponding member, and in 1984 he was elected an academician of the Russian Academy of Sciences. Since January, 2006 has been the chief advisor to the general director for science. Despite the years, he remains in service - his working day begins at 9.00 every day at AK them. C .B. Ilyushin.

The newspaper "Military Industrial Courier" heartily congratulates Genrikh Vasilyevich on his anniversary. In the next issue of our publication, his interview will be published, in which an outstanding aircraft designer will share his memories of his amazing creative path and talk about the challenges facing current aircraft designers.