Day of Special Forces of the Armed Forces of Russia


The very same 24 date of October as the Day of the Special Forces of the Armed Forces of the RF Armed Forces is associated with such an event as the signing by the Military Minister of the USSR, Marshal of the Soviet Union Alexander Mikhailovich Vasilevsky, a secret directive to create special forces for operations in the rear of a potential (potential) enemy. The directive aimed to form from more than 5,5 thousands of people of 46-special personnel. According to the letter of the directive, it was necessary to report on the results of the formation to the 1 of May 1951 of the year. As you can see, the frames were set very rigid.

However, the tightness of the time frame did not prevent the creation of the required number of army special forces units, which by 1951 had been formed in all Soviet military districts without any exception. Special-purpose companies appeared on fleets Soviet Union to improve the combat capability of naval units and formations.

The need to create special forces in the Armed Forces of the Soviet Union was primarily associated with the emergence and activities of NATO. After all, the Vasilevsky directive itself was born literally several months after a number of western states (Belgium, Britain, Denmark, Iceland, Italy, Canada, Luxembourg, the Netherlands, Norway, Portugal, the USA and France) announced the creation of the North Atlantic military bloc. The Soviet leadership, conscious of the fact that the military alliance to the west of the USSR’s borders is not created with the best of intentions, decides to begin work aimed at creating its own system of resistance. What the opposition to the USSR and NATO first, then the Warsaw Pact countries and NATO resulted in as a result, is well known to all, but this, as they say, is completely different история.

Of course, there is no reason to believe that until 1950 of the year (that is, until the appearance of the secret directive of Marshal of the USSR A.M. Vasilevsky) there was not a single soldier in our country who performed those tasks that the representative of the special forces cohort of the Armed Forces was intended to perform. So, back in the distant 1916 year, the so-called OMBON was created as part of the troops of the Russian Empire. Interpretation of this abbreviation is as follows: A separate special purpose marine brigade. The composition of the brigade special purpose included, as follows from the very name, naval officers. And ever since the domestic army special forces began its long journey, which were both their triumphs, and very tragic events.

The servicemen of the special units of the Armed Forces of the USSR and the Armed Forces of the Russian Federation took part in combat operations during various conflicts. A special page in the history of army special forces, of course, is connected with the fulfillment of internationalist duty in the Republic of Afghanistan. The limited contingent of Soviet troops in the territory of the Democratic Republic of Afghanistan (Democratic Republic of Afghanistan) included various units and formations of special forces, including units providing combat service, which include, for example, the 19 engineering battalion or the 2088 separate battalion lashing. The units of the army special forces in Afghanistan are, first and foremost, of course, the formation of the Main Intelligence Directorate of the General Staff of the Russian Armed Forces.

The units of the army special forces showed themselves in the course of both Chechen campaigns, when sometimes they had to confront the enemy forces, which were many times larger than the units of the Special Forces of the RF Armed Forces.

The main feature of special-purpose units is their relatively small composition, with each fighter having not only excellent military training in all respects, but also special psychological qualities: determination, initiative, ability to operate effectively in a team. 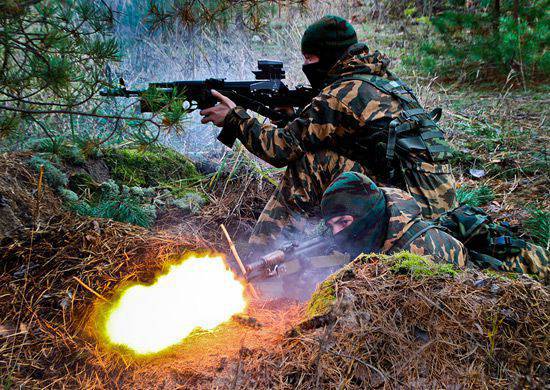 Today, the recruitment of special forces is made from professional military personnel. The role here was played by the reduction of the service life on conscription, and the increase in the number of contract servicemen in the Russian army.

The modern special forces fighter of the Armed Forces of the Russian Federation is a person who is fluent in various types weapons, understands the nuances of the mine-explosive business, effectively uses optical-electronic devices in order to observe the enemy. For some time now, special forces have been learning how to use unmanned aerial vehicles, which allow reconnaissance of combat positions and infrastructure of the enemy.

Press office The Ministry of Defense gives an additional characterization to servicemen of units of the Russian Special Forces:

The personnel of special-purpose units carry out landing from airplanes and helicopters, including parachute jumps on the water, at night, from great heights with oxygen instruments and gliding along the horizon, followed by exit to the object.

Special attention in the combat training spetsnaz paid to physical training. Each of them is fluent in methods of throwing piercing and cutting objects, as well as hand-to-hand combat, which is based on elements of the national combat sambo and other effective martial arts, in particular, karate and jiu-jitsu.

Due to the high level of combat proficiency and equipment, there are no impossible combat missions for special units.

Special Forces units of the Armed Forces of the Russian Federation are actively rearming. So for the year in the Central Military District special forces received 24 armored car "Tiger-M SPN", having a fifth class of ballistic protection in the frontal projection and the third class - in the stern and side projections. 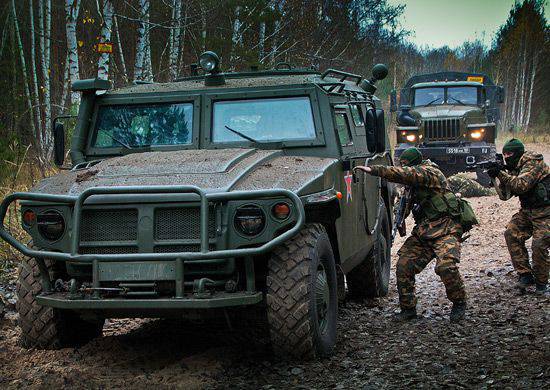 Special forces soldiers have increased training. In particular, literally on the eve of their professional holiday, the special purpose units of the Southern Military District were involved in special tactical exercises held in the Krasnodar Territory.

After the landing by landing method, the servicemen of the special forces units in full gear made an 10-kilometer-long march across rough terrain to the area of ​​the counter-terrorist operation.

According to the plan of the exercise, the town, consisting of 10 houses and infrastructure, was seized by a conditional illegal armed group (IDF) with a total population of about 30. In order to free the hostages, the assault detachments blocked the town and destroyed the militants.

Before the start of active operations, a reconnaissance of the area was carried out using an unmanned aerial vehicle. Special Forces also worked reconnaissance and search actions, as a result of which data were obtained about the enemy.

In order to create an environment as close as possible to the combat, during the storming of positions of the conditional illegal armed formations, Im-100М imitation mines and smoke were used.

The servicemen worked out the procedure for the destruction of the gangs in the forest, actions in the rear, the organization of ambushes and observation posts in the conditions of the use of sabotage and reconnaissance groups by the enemy.

About 300 military personnel took part in the special tactical exercise, up to 30 units of weapons and military equipment were involved. 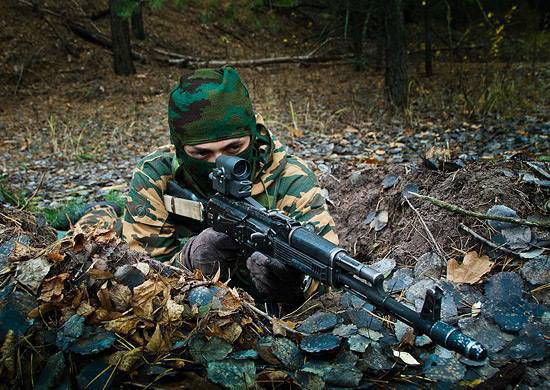 “Military Review” congratulates servicemen and veterans of the later divisions of the Special Forces of the RF Armed Forces (USSR) on their professional holiday!

Ctrl Enter
Noticed a mistake Highlight text and press. Ctrl + Enter
We are
Day of the special forces of the Russian FederationDay of special forces
58 comments
Information
Dear reader, to leave comments on the publication, you must to register.