Monkey with a grenade

October 23 2015
71
About ten years ago the anecdote about a monkey with a grenade was quite popular among the male part of our population. There were in mind women who then massively sat behind the wheel of a car. I admit, I was somewhat embarrassed by this comparison, because it concerned our wives, daughters and even someone's mothers. Therefore, I had to say that during my stay in Central Asia, similar claims to the style of driving a car existed also to local men. (“Every trip to the city was like going into battle!”) The authorities knew these moods and reminded from time to time that the situation was understandable: one generation moved from the donkey to the car; over time, gain experience. A dozen years have passed, and women behind the wheel no longer have the same attitude, since they no longer massively perplexed road users. 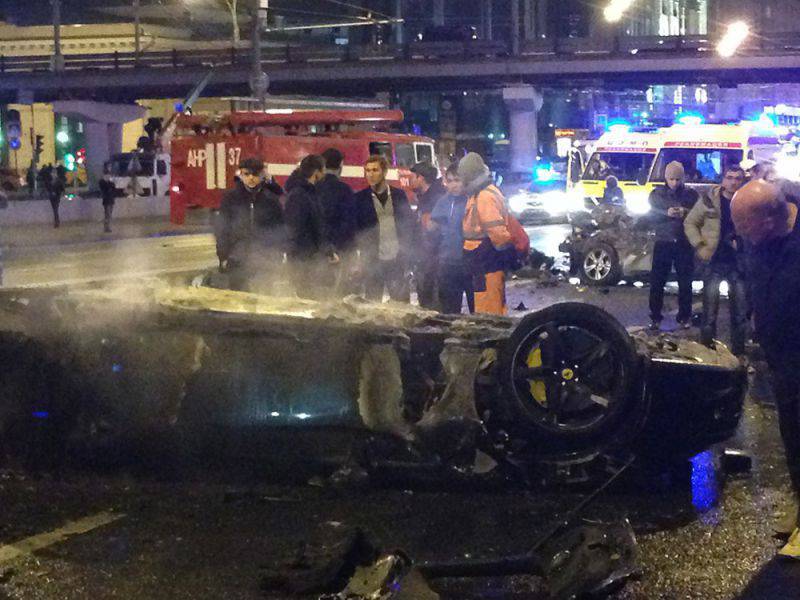 But the other day this comparison came up in my memory, when on TV they showed the antics of a fool who made a wild accident on a Ferrari that only miraculously cost without victims. The media, displaying genetic flexibility, obsequiously called the "hero" a "diamond boy." Although according to all the logic of this type is fully consistent with the definition in the title of the article.

And the point here is not at all to stigmatize the culprit. This is a big psychological and social problem that the modern supertolerant science diligently avoids, since in this case this expression bears an absolutely complete and corresponding semantic load. After all, a man was singled out from the animal world precisely because he was able to acquire the ability to carry out a producing method of life support. In contrast to the appropriative method inherent in animals. The return from the production method to the appropriator indicates the degradation of individuals. And the accumulation of such individuals in society to a critical mass inevitably leads to its involution, destruction and death.

I stayed with this article for several days because I was looking for information read in one of the books in order to bring it verbatim and with the necessary references. But not found. Therefore, I will give it from memory. It was about the maintenance of the cuneiform tablets of one of the lost ancient civilizations: there were more merchants than those working in the field and workshops, therefore lawlessness and ruin are everywhere, the state perishes, and people suffer innumerable disasters. This is the general meaning of the entries. That is, in society there were critical many individuals with an appropriative method of life support who wanted everything, at once and a lot, and tried to appropriate it all, engaging in mortal combat with the same competitors. Which led to the death of this whole society.

A similar situation is developing now in many countries of the world, including, unfortunately, with us. Therefore, in order not to share the fate of civilizations that have sunk into oblivion, it is necessary, without delay, to understand the urgent problem.

If the anthropomorphic monkey (animal), having mastered the producing method, has evolved into a human, then does a human being turn into an appropriative method into a humanoid animal? In my opinion, this is exactly the case. This is the only way to explain the behavior of such individuals.

Departure from the life-sustaining method of production inevitably affects the state and psyche of the individual. He begins to feel (rather feel than realize) his worthlessness in this world. This sensation burns from the inside, forms an irrational hatred of all working people, causes an inferiority complex and, as a result, the need not only to assert itself, but also to “get up ponad mustache,” as today degrades in Russia split off from Russia are being repeated without any medical education.

It is this desire that pushes such monkeys to be established with the help of a grenade, the role of which can be fulfilled by a car with a burnt-out or torn off silencer, a motorcycle or something else.

When Ksenia Sobchak, speaking of the greatest worker in the world - the Russian people, declares: "Such people are called cattle ...", this is a Freudian reservation. Such individuals, all their life engaged only in squandering money they did not earn, live exclusively on animal instincts and interests. This means that they correspond to the definition given in the quotation. And it does not matter that, as a character's grenade, the character has a tele-information weapon.

Such fighters with "cattle" is always enough. They bloomed in during perestroika, seizing power in the country.

CHUBAIS: "What are you worried about these people? Well, thirty million will die out. They did not fit into the market. Do not think about it - new ones will grow."

Gaidar: "There is nothing terrible in the fact that some pensioners will become extinct, but society will become more mobile."

VARFOLOMEYEV (“Echo”): “... it’s better to keep the power (even through posts) of corrupt and not the most bloodthirsty bureaucrats than the coming of Stalinists and dense nationalists to this power”.

KHODORKOVSKY: "... it is a shame not to steal from such a state."

L. PONOMAREV: "The hemp march and gay parade should be allowed ... People with democratic views and a high degree of civic activism will always find the strength and courage to support the dissenters, including supporters of the legalization of cannabis and gay parades."

K. SOBCHAK: "1917 first year, then 1937 right away. Two consecutive destruction of the elite led to the fact that Russia became a country of genetic trash. I would have banned this country altogether. The only outlet here for me is art galleries. And the circus" .

V. POSNER: “Marijuana, as rightly noted by many experts, is no misfortune at all. And it, of course, needs to be legalized. But I go further than the Dutch government, I believe that all drugs must be legalized. If we make it so that any drug can be bought at the pharmacy “for three kopecks,” then we will knock out the economic foundation from under the feet of the drug mafia. "

S. KOVALEV "Terrorists need to understand, they are forced to act extremely cruelly."

KHAZANOV: “In this country, goats graze with plucked sides, along the fences timid inhabitants make their way timidly. I used to be ashamed of this homeland, where every day is humiliation, every meeting is like a slap in the face, where everything — landscape and people — offends the eyes. But how nice it is to come to America and see the poured sea of ​​smiles! ”

A. TROITSKY: “I consider Russian men for the most part to be animals, creatures of not even the second, but the third kind. When I see them, from the cops to the deputies, I think that they, in principle, should become extinct ... In fact, I don’t feel sorry for this breed. ”

(I confess, sometimes doubts are gnawing, but, having read the last specimen, I sigh with relief: I did everything correctly.)

Any reader can easily extend the above list, and this indicates that the problem of degradatov in our country is extremely acute. It is aggravated by the fact that the lack of a full-fledged mind degrades fill, as a rule, with the highest activity and furious energy, which allows them to break into different levels of power. First of all - the fourth (informational). And this means that it’s time to seriously fight them. In the 1991 year, we hoped that the state structures would calmly “destroy” the situation, and our country would continue its further development. However, the hopes were not justified: the Soviet Union was destroyed, the people were bred on national kennels, poisoned with each other, lowered the standard of living, killed millions of people.

Western globalizers are now wreaking havoc all over the planet, wherever they can. Involution is also a road to chaos. Therefore, we must consider how to resist the involutionaries in our society, so that this fifth column does not again inflict a sneaky backstab on the working people.

It would be interesting to learn opinions on this account from visitors to our site. For the time being, I see only one real possibility: wherever possible, speak the truth and call things and actions by their proper names. Therefore, "diamond boys" should be called by their real name - "monkeys with a grenade." As, however, and similar girls. And demand this from the media that exists on our (taxpayers) money.

Ctrl Enter
Noticed a mistake Highlight text and press. Ctrl + Enter
We are
About Stalin and KhrushchevWhat you didn't want to know about England
71 comment
Ad