The king, his money and people 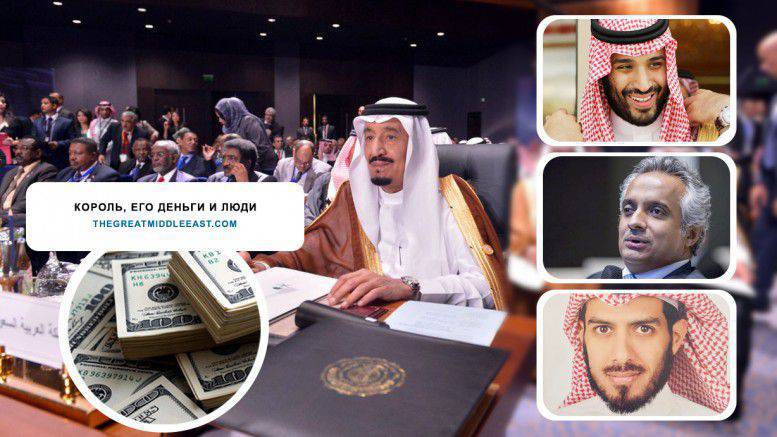 One of the attributes of royal life is certainly wealth, acquired by various means or inherited from noble ancestors. And if in the “decaying” Europe the wealth of monarchs and their families is almost universally registered, the same cannot be said about the oil monarchies of the Persian Gulf. It's no secret that the royal family of Saudi Arabia is one of the most numerous royal families and at the same time one of the richest in the world.

In contrast to many countries with a monarchical form of government, the throne in Riyadh is transferred not from father to son, but from brother to brother according to the principle of seniority.

The current king Salman ibn Abdul-Aziz Al Saud became the ruler of the country in January of this year. However, it is worth emphasizing that, due to the illness of his predecessor, Prince Salman has for a long time actually ruled the country, making a group of businessmen and managers loyal to him around this period. This group includes very famous businessmen. Each Saudi monarch had with him such a group - businessmen and managers, who essentially engaged in mediating the distribution of large government orders and playing the role of secret treasurers for the monarch. Under the late King Abdullah, the influential brothers Mansur and Salah Fustok (Lebanese by birth) were promoted. One of the brothers, Mahmoud Fustok, died in Florida in 2006, during a mysterious car accident.

With the coming to power of King Salman, the Fustok brothers remained no destiny. Brothers are not bad earned on supply contracts weapons and other necessary equipment for the National Guard.

It is worth noting that in the conduct of business, the brothers not infrequently resorted to the services of special services agents, both former and current ones. The arms business is primarily politics and political interests, and then business.

Now in the circle of trusted people of the king there are also influential Lebanese, such as: Mohammed Dohok is a friend of the son of the king, Prince Mohammed bin Salman, Dohok has extensive connections in France and often accompanies the prince on his trips to Paris, and not only in business.

His competitor is the famous Saudi lawyer and chairman of the Franco-Saudi Business Council Mohammed bin Laden.

There is also a very interesting character among the King’s people called Walid al Hartha. He is called the secret treasurer of the king and his entire family. Harthe some officially, some not officially, manages companies owned by King Salman. These companies are registered in the European tax haven, in the Grand Duchy of Luxembourg. It is known for certain about the three companies under Hartha’s management: Safason Corporation, Valburton İnvestmens, and Shaf Corporation. Harthi was educated in the United States, worked at the Saudi embassy in Washington as military attache, then was the closest financial adviser to Prince Sultan bin Abdulaziz al Saud.

Each monarch should take care of the welfare of his family, and when the family is comparable with the population of a small town, then the care is very important and priority. Naturally, the redefinition of the large financial flows between the former “inner circle” of the late monarch and the “inner circle” of the new monarch could not pass without serious consequences and without insults and mutual accusations. At the heart of all intra-disagreements and struggles invariably stands precisely this factor ...

We are in Yandex Zen
Pakistan - Saudi Arabia: Strategic Cooperation
Interview of President Bashar Al-Assad to the Sunday Times newspaper
11 comments
Information
Dear reader, to leave comments on the publication, you must to register.