October 16 2015
46
After reading a number of materials on "Politnavigator", I caught myself thinking that I was reading clearly not a Ukrainian site. The materials were a reference to the channel "Inter". I looked. Having got through the MOV, which, fortunately, rose, I realized that I did not understand anything completely and irrevocably. 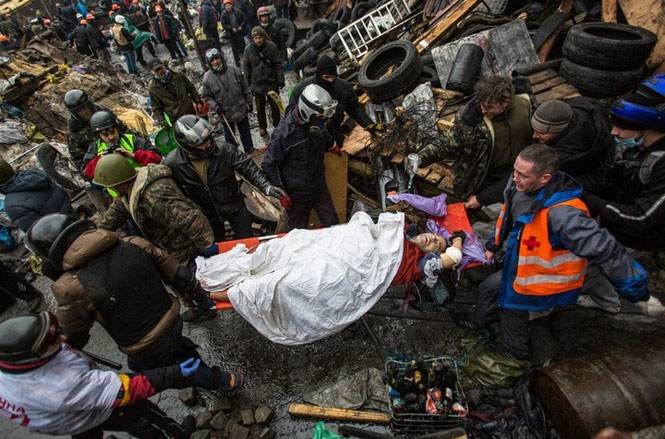 However, the information from the optic and auditory nerves, once in the brain, there is still established.

The Prosecutor General’s Office of Ukraine confirmed on the central Ukrainian TV channels information about the possible involvement of members of the radical nationalist party Freedom to shoot people on the Maidan in order to provoke riots, which eventually led to the overthrow of Viktor Yanukovych.

Nate in soup, as they say.

Moreover, the press service of the Prosecutor General’s Office of Ukraine explained the purpose of the searches carried out in the apartments of three high-ranking functionaries of VO “Freedom”.

It was these guys in February 2014 who lived in those rooms of the Hotel Ukraine, from whose windows, according to the investigation, "peaceful" protesters and police officers who tried to resist the "peaceful" sabbath were shot.

Ukrainian law enforcement officers search the homes of members of VO Liberty in a criminal case investigating murders on Euromaidan in the winter of 2013-14. This was announced on his Facebook page by the deputy of the Kiev regional council from Svoboda, Alexander Aronets, and attached copies of the court decision. 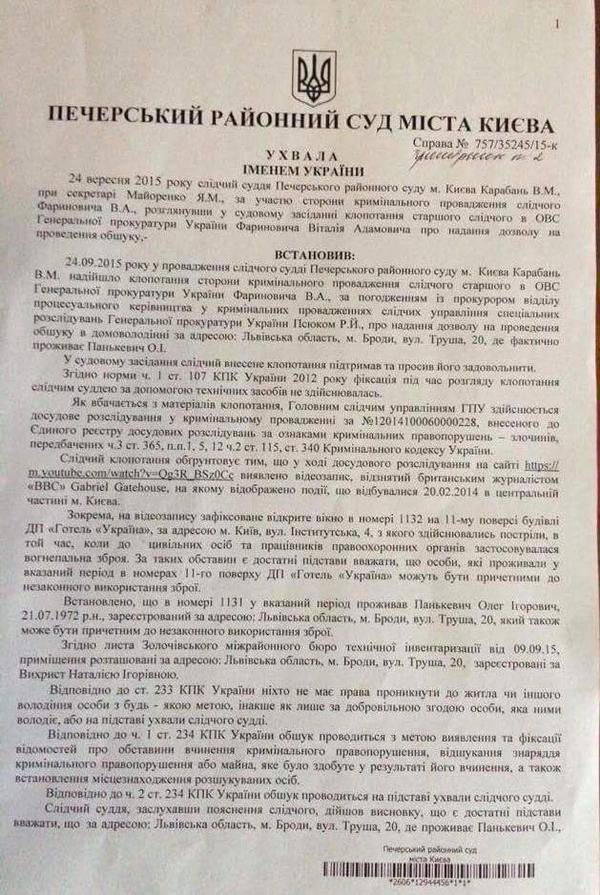 Does someone understand the essence of what is happening?

Excuse me, but where are Putin, Shoigu, Rogozin and the whole FSB-shnaya army, which stood behind the bloody events of Kiev? No, dear, it already does not fit into any framework at all. Is it that, in Kiev, enlightenment comes from individual officials? Come on...

Thus, the Pechersk District Court decided to search the house of the ex-People's Deputy from “Freedom” Igor Pankevich in Lviv, who during the mass executions lived in the Kiev hotel “Ukraine”. In evidence that the shooting was carried out from the windows of this hotel, the investigation results in a video recording of Air Force journalist Gabriel Gatehouse.

"The video recorded an open window in the 1132 room on the 11 floor of the building of the State Hotel Ukraine, from which shots were fired while firearms were used against civilians and law enforcement officers weapon. Under these circumstances, there are reasonable grounds to believe that persons who lived in the specified period in the rooms of the 11-th floor of the State Hotel Ukraina may be involved in the illegal use of weapons, ”the resolution says.

It turns out that the Heavenly Hundred was sent to heaven not by the Russian curators of Yanukovych, but by their very own?

And why would it suddenly? Wept, wept, medals of order to the victims posthumously hung, and now? Now we begin to see clearly? And Russia seems to be out of business?

All too illogical to believe the eyes and ears.

Why would the Prosecutor General’s Office decide so seriously to do this long forgotten thing? Yes, and with such a turn? Who, as they say, is profitable?

Profitable, of course, first of all, Mr. Poroshenko. Any organization, be it a country or an individual pig farm, should have only one helmsman. And the helmsman, apparently, came to the conclusion that those who brought him to this place were somewhat overwhelmed. And it's time to put them in place. But it was completely broken by the hands.

Well, at least count me on the head teshes, but I do not believe that the investigators without a team decided to take this story to the whole country. Not that level. But if the team was ...

It is terrible to think, and what if from “Blow” who will trample against the president? Or "Batkivschiny"? What then?

No, it is clear that the arts will be enough for everyone. Here you and the bus in Volnovakha and Boeing are unfortunate. Everyone will get what to answer.

Apparently, the list of applicants is still the same, since they started from such far frontiers.

Well, everyone turns his chair as he wants. And Peter Alekseevich is no exception. In the end, was he the king of all Ukraine, or did he come to purely neighing? He wants to start chopping off the legs of the chair - why not? On our side, in principle, it doesn’t matter to anyone who shot when. On our street this is already so clear and understandable. And similar historical collisions will not bring us anything. Russia has already been blamed so many times, ranging from Buryat tankers to the stolen Ukrainian Buk, which is more, once less ... Ah! And wave your hand.

But how does Freedom feel now? Mr. Tyagnibok? Pankevich? Not sure that they are all calm. Once upon a time, they lived, they didn’t bother, they wore a black and red flag, they chopped up wood on Gilyaks, They injected Gunpowder to power ... And then it all went wrong. Gunpowder turned out to be an ungrateful essence and decided to show “freedom” what justice and honesty are. Funny.

Yes, it is clear that Peter Lekseich’s code followers will be smaller. And one of those warm companies who built him to the throne. Yarosh was already stumbled under the table, so that he was not visible and not heard, now, apparently, it was the turn of the companions.

We, as the saying goes, that vodka, that machine gun, just to get the legs out. But to whom Poroshenko will be able to rely, when the dogs and the "Svobodovtsy" will go to throw him out of the throne down - the question is still the same. And at the pace go. In the name of the great and square.

The fact that this will happen sooner or later is unequivocal. If only it was not quite late for the Ukrainians. What about us? From here we can observe the development of events completely.

We are in Yandex Zen
Tricky comments. APU-2016: reflections on numbers
Situational analysis of the death of the MH17 flight (Malaysian Boeing 777), made on the basis of engineering analysis from 15.08.2014
46 comments
Information
Dear reader, to leave comments on the publication, you must to register.