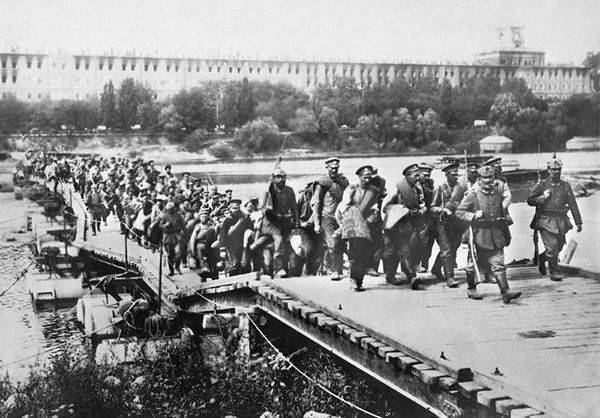 Talking about the "great retreat" of the Russian army in the spring and summer of 1915, we already wrote about the inglorious surrender of the fortress Novogeorgievsk, and about the feat of pilots of the serf squadron, who managed at the last moment to evacuate the banners of military units, as well as the orders of officers and thereby save honor garrison But besides these heroes there were others about whom история retained only fragmentary information. When, after the 10-day German siege, the commander of the Novorgeorgievsk cavalry general, N.P. Bobyr, found the resistance useless, ran to the enemy, then giving the order to surrender the fortress, from 83 of thousands of fighters only a few officers and soldiers refused to obey this order, determined to break into to their own.

Among these glorious heroes are usually called four names: Fedorenko, Stefanov, Ber and Berg. These surnames are known for the story of the former Tsarist and then Soviet officer V.Dogadin, who noted in his memoirs that he had met with a fellow student of the Engineering College of the Engineering Battalion Fedorenko, one of the Minsk streets, in the fall of 1915 in the autumn of Minsk, surprised by the message of his friend that he had just arrived from Novogeorgievsk.

"" How from Novogeorgievsk? After all, he has long been among the Germans? " - I was surprised. “Still, I am from there,” Fedorenko replied and told the following. After the futile resistance of Novogeorgievsk, the commandant, his general Bobyr, surrendered the surrounded fortress to the enemy and ordered the garrison to assemble in the square to surrender weapons. And at this moment five officers — Fedorenko, Stefanov, Ber, Berg and another five, whose name I don’t remember, all the students of the Nicholas Engineering School and Academy did not obey the commandant’s order, disappeared from the fortress and went to catch up with the far away Russian army. 18 days they made their way to the rear of the Germans, passed 400 kilometers during this time, and only near Minsk came into the location of our units. One of them - military engineer Berg - before that worked in the submission of the gene [eral] Schwartz in one institution with me to strengthen the position. Suddenly summoned from his precinct, and not knowing that he was called into the administration to be sent to Novogeorgievsk, who was in the service, was waiting for the siege, Berg arrived in a tunic with no clothes. General Schwartz threw his overcoat on his shoulders and put him in a car going to Novogeorgievsk. In this overcoat on a red lining and with shoulder straps of generals, Berg went out with his comrades from the entourage, ”Dogadin recalled. 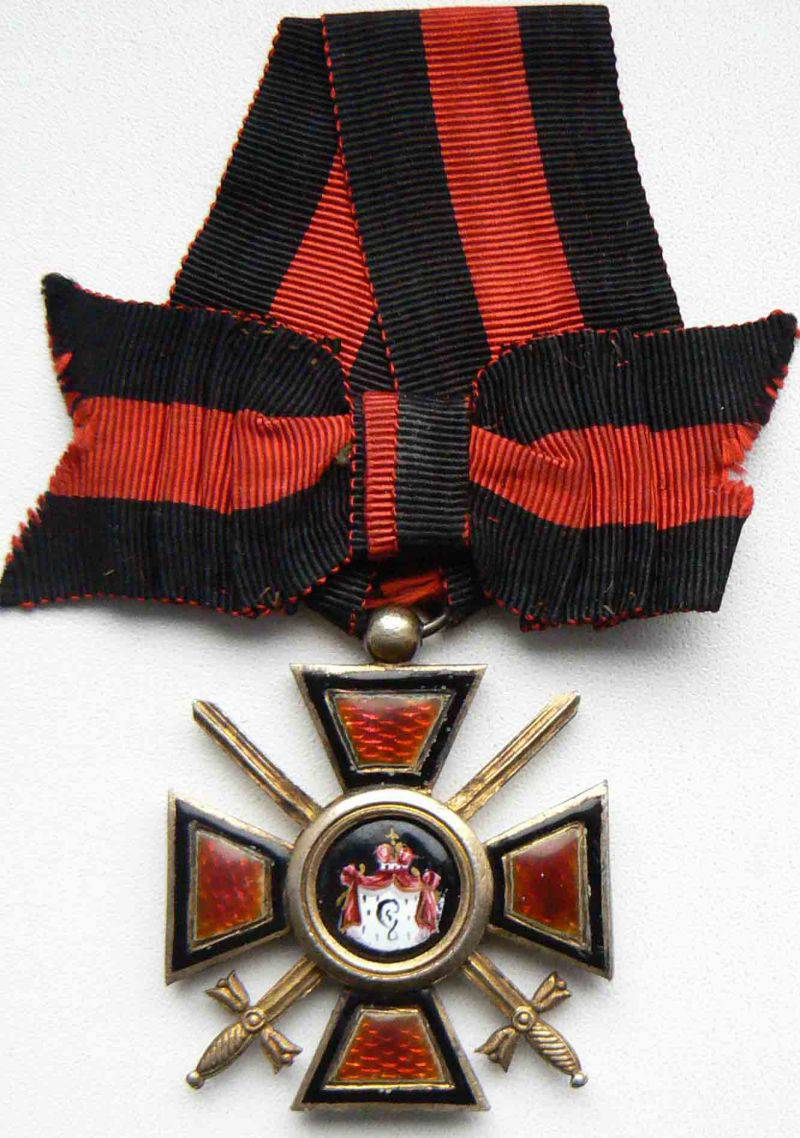 Order of sv. Vladimir 4 degree with a sword and a bow
“At the same time, one must also bear in mind,” the officer continued, “that being in captivity at that time was not at all considered a crime, especially if it happened on the orders of the authorities. For their feat, all five were awarded the highest (not counting George) Order, which in their rank they could then receive - the Vladimir Order of the 4 class with swords and bow ”.

Lieutenant Vyacheslav Iosifovich Stadnitsky-Kolendo and Private Andrei Tregub and Arkhip Burdak
Meanwhile, thanks to press reports, the names of three more heroes who managed to escape from Novogeorgievsk became known. As reported in October 1915 of the New Time, Lieutenant Vyacheslav Iosifovich Stadnitsky-Kolendo and Private Andrei Tregub and Arhip Burdak, “not wanting to be captured by the Germans, left Novogeorgiyevsk at 4 in the morning of August 7 and, after successfully making their way through the line of taxation the enemy, on the seventeenth day of the journey, having passed about 300 versts in the rear of the enemy, came to the village. Utiki Pruzhansky County, Grodno Province., To the position of one of its regiments. "

The officer and soldiers made their way to the location of their forests and swamps, through Belovezhskaya Pushcha, avoiding meetings with the enemy. “More than once, the fugitives turned out to be among the German patrols, but safely eluded them into a thicket of forest and swamps. They walked along the compass, sleeping in haystacks, occasionally entering separate houses. They ate first with canned food, and then with what they could get. The last three days, in the field of enemy patrols, were especially heavy. There was nowhere to get bread, fire could not be set apart, and all the time, following the forests parallel to the traveling movement, it was necessary to carefully hide and at the same time outrun them in order to go to their own. For his bold breakthrough from an enclosed fortress, the lieutenant Stadnitsky-Kolendo was presented with a corresponding award, and the lower ranks were awarded with St. George's crosses and medals, ”a newspaper article noted. 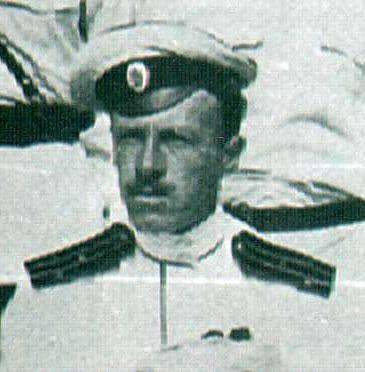 Lt. Col. Vyacheslav Iosifovich Stadnitsky-Kolendo
Nothing was possible to learn about the future of the hero soldiers, but the name of their commander, Lieutenant V.I. Stadnitsky-Kolendo, will again be mentioned in documents from the times of the Civil and Second World Wars. The hero of Novogeorgievsk to 1918 year reached the rank of captain. Not accepting the October Revolution, he joined the White movement, becoming a member of the first and second Kuban campaigns, was wounded in the battle near the village of Shablievka. At the end of November 1918, Stadnitsky-Kolendo, was appointed commander of the 3 battery 1 of the Officer Light Artillery Division, commencing 1919 batteries in the autumn of 5, and since April 1920 was commander of the Markov artillery 3 battery, in April 1940 of the Markov artillery battery, brigade, brigade, Markovskaya brigade Civil war Stadnitsky-Kolendo graduated with the rank of lieutenant colonel and a knight of the Wrangel Order of St. Nicholas the Wonderworker, which was awarded for outstanding military exploits shown in the fight against the Bolsheviks. This was followed by forced emigration to Gallipoli, service as part of the Markovsky artillery battalion in Poland. The latest information about Stadnitsky-Kolendo refers to XNUMX-m - joining the ranks of the Russian corps, who fought in the Balkans, he died in one of the battles of the Second World War.

We are in Yandex Zen
The Despicable Bean
How defended the "Russian heroes"
5 comments
Information
Dear reader, to leave comments on the publication, you must to register.