October 12 2015
64
While Washington, trying to shine a dull image, claims the need to "put pressure" on Assad and that Moscow and Tehran should "put pressure", a major US press talks about the "informational victory" of the Kremlin, Putin's chance to implement the "ideal scenario" and that the White House was taken by surprise by the actions of the Russians in Syria. Leading American media are pouring more and more poisonous criticism on the “strategy” of the figure from the Oval Office. 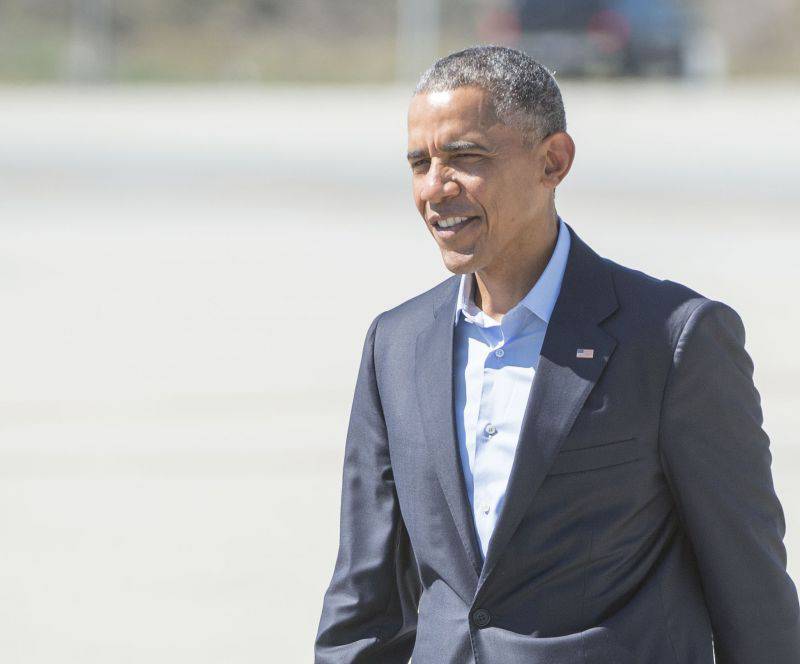 Where is your tie, Mr. President?

Washington "expects that Russia and Iran will have an impact on Assad," Barack Obama said in an interview with the 60 Minutes program on CBS, writes "Lenta.ru".

According to Mr. Obama, the Russian strategy in Syria is wrong. “As long as Assad is in power, it will be difficult to switch the forces of the moderate Syrian opposition to fight the“ IG, ”the US president said.

"We knew that Russia plans to provide military assistance to Syria, because it was afraid that the Assad regime would collapse," the head of the White House said.

Analysts have a different opinion. The opposite.

Here are the arguments.

The first signs that Moscow was going to conduct a military operation in Syria were the Kremlin’s requests for permission for a rather large number of its heavy aircraft to cross the borders of other states. They talked about this since the middle of August, 2015, and they did not speak somewhere, but in the Obama administration. The newspaper cites one such statement: “We have received reports that the Russian Federation is asking to allow more of its aircraft to cross the borders,” said a presidential administration official. And the details were known: the official said that Moscow had requested permission for both cargo aircraft and "combat and bombers." “It was clear,” the official said, “that something big is happening.”

And yet the United States missed the Russian military operation: the White House, according to journalists, apparently, "was taken by surprise by a series of air strikes" of Moscow. In addition, according to the authors of the report, Moscow’s attacks were directed against the Syrian rebels. The latter, by the way, have been teaching and arming the CIA for two years now.

Russian airstrikes "undermined" the already weak American strategy. And on October 9, the Pentagon officially acknowledged that it is winding down its mission to create forces to combat IS.

It seems, we’ll add, journalists are thus summing up the actions of the Kremlin and the reaction of the White House. With actions, everything is clear, what is the reaction?

Here she is. The Pentagon’s curtailing the Syrian programs has affected several areas at once: 1) secret intelligence attempts to help the Syrian rebels to overthrow Bashar al-Assad will be stopped; 2) collapses open operation with the use of aircraft and the help of a number of rebel groups fighting against the "IG".

Today, US officials and experts admit that the Obama administration has reacted too slowly to obvious signs of impending problems. “I think there is a gap between the intelligence gathering stage and the strategy development and implementation stage,” said former intelligence analyst for the Military Intelligence Agency Jeffrey White (now he is following the development of the Syrian situation at the Washington Institute).

Even by the beginning of September, when Putin was transferring equipment and military personnel to Syria, the United States did not have a clear interpretation of Moscow’s actions, the newspaper writes.

As for the CIA, this intelligence agency refused to comment on participation in the Syrian conflict.

It is not excluded that the Pentagon’s curtailment of its programs will lead to an increase in US aid to the groups supported by the CIA in Syria. According to unnamed officials, the developers of the relevant program are considering some "options for action", for example, sending missile systems to Syria. Such systems would allow the rebels to strike at Russian bases. White mentioned that he mentioned some “more advanced” systems to the publication, but added that such a strategy would contradict what “Barack Obama is“ ready to achieve in Syria ”.

In the editorial column of the same Washington Post “Obama's retreat” in Syria is stated directly.

The administration of the US president, which has publicly announced its refusal to support the Pentagon’s programs for the recruitment and training of "Syrian forces," thereby signifying a "further retreat." However, this is not surprising: many critics of the White House foresaw a similar outcome from the very beginning of the preparation of the program.

Obama predicted 20 months ago that Putin’s “invasion” of Ukraine would collapse, but today Putin controls the Crimea and a fragment of eastern Ukraine, and he managed to defend an agreement with the West on a political settlement. Now the White House assumes that the Moscow offensive in Syria will not end with anything good for Moscow either. Risky point of view, says the publication.

The United States does not necessarily have to “fight with Russia” in order to take measures in Syria against Putin’s aspirations that meet the “vital interests of the United States.”

Assistance to “moderate forces fighting the Assad government” should be accelerated. Rebels really need anti-tank weapons. In northern Syria, in partnership with Turkey, a “safe zone” should be created. Instead of “lecturing” Putin, Mr. Obama must show the Kremlin “red lines”. If you do not draw a line for the Russians, their “aggression” will escalate, the newspaper writes.

Another major edition, "The Huffington Post", writes directly about the "information victory of Russia." This was told by publicist Scott Ritter.

However, according to "unnamed sources" from the Pentagon, four of the twenty-six rockets fell not at all in Syria, but in Iran, where two of them exploded "in the countryside", causing damage to buildings. It was also said about the likely victims "among the civilian population." The US has absolutely no evidence, and the Russian and Iranian authorities strongly deny these allegations.

And here's a fact: Russia is currently a country capable of launching missiles at a distance of almost 1000 miles. The informational actions of the Russians show that the Kremlin wins the propaganda war, and not the American Pentagon, which would be very advantageous for the Russians to miss. However, the "claims" of the Pentagon to the Russian missile "miss" are unfounded.

The unreasoned nature of the openly anti-Russian propaganda campaign of the Pentagon only underlines the difficult situation the United States has fallen on at the global level after the Russian attacks. The Russians offered Washington to coordinate military operations in Iraq and Syria in the new joint Russian-Iranian-Iraqi-Syrian headquarters in Baghdad, but the Americans categorically refused to do so. As a result, the US embassy in Iraq receives a “rude warning from a Russian officer about the closure of Syrian airspace,” as Russian operations are about to begin. The United States Air Force is forced to suspend operations so that Russian and American aircraft will not make contact with each other.

In addition, US aircraft operate with the permission of the Iraqi government on Iraq, but do not have the appropriate permission from the Syrian government. That is, in fact, the United States is operating outside international law. The Russians are present in Syria at the invitation of the official government, the author recalls. Therefore, they, in fact, now control the entire airspace of Syria. The United States has no legal basis to protest against Russia's actions.

American prestige caused irreparable damage. This is the real “face loss”. The Russian missile strike is only part of a “large coordinated offensive” involving the Syrian army, Iran and Russia, the author believes.

Ulrich speck in "The American Interest" writes that the West was "caught off guard" by the actions of Russia.

Many Western leaders and commentators do not dare to condemn the actions of Russia in Syria. They believe that Russia ultimately wants to bring at least some stability in the region and put an end to the war.

According to the journalist, Russia is leading an asymmetrical war with the West in Syria. The West is stronger, but Russia "can win if it plays smarter." Putin’s short-term goal, according to the author, is to prevent the region’s transition to a liberal democracy. In the long term, the goal is to turn the region into a “bloc”, ready to act under the command of Moscow. This is the creation of a new multi-polar world in which Russia is one of the poles. And this pole can mean more than just regional power. In short, the loss of Syria’s long-time ally for Moscow would mean the loss of the last Russian bridgehead in the Middle East and a significant defeat.

Military intervention on behalf of the Assad regime presents Putin with a range of opportunities, the author believes.

1. Demonstration of power in front of the "hesitant and irresponsible United States."

3. A new lever to weaken the EU’s political solidarity and resolve. And this Putin’s strategy “seems to be working,” the journalist is excited to say. German Chancellor Angela Merkel, who openly criticized Putin’s actions in Ukraine, is now “hoping” that Russia will give Syria peace. And the head of the European Commission, Jean-Claude Juncker, speaking in Germany, said that “practical efforts should be made” to improve relations with Russia. The EU should see Russia as a “decent” partner. The European Union cannot allow Washington to dictate the rules of relations with Russia.

4. Keeping Assad in power. And at the same time - the failure of the project "liberal democracy" in Syria. Putin, after all, “is positioning Russia at the forefront of the struggle against liberal democracy,” the author believes.

If Putin’s actions in Syria lead to success, it can strengthen the bonds between Russia and its partners and allies among the “autocrats.”

The stakes are high, and this is a risky move for Putin. But, unlike Ukraine, in Syria, Moscow is "part of a wider coalition," which includes the Assad army, Iran, and Iraq, and Hezbollah. And if Russia and its allies succeed in ending the “opposition” in Syria, the world will see the emergence of a broad “informal” coalition in which the US and European powers will have to fight the IS “together with Russia, Iran and the Assad regime”. “For Putin, this would be an almost perfect scenario,” the analyst sums up.

While Mr. Obama is trying to "read lectures" to Putin, the Russians are acting in Syria in full accordance with international law. This cannot be said about the actions of the United States, which, through the CIA and the Pentagon, support illegal armed groups in Syria. And if Russia helps Assad in the fight against extremists, then Washington has the goal not to fight the "IG", and the overthrow of the legitimate president of Assad. Mr. Obama does not know how to get out of an obviously disastrous situation. That is why the large American press of the USA is reiterating the “informational victory” of the Kremlin and Putin’s chance to realize the “ideal scenario.” I didn’t wait, didn’t wait for Obama to make such a move from “isolated” Putin ...

Ctrl Enter
Noticed oshЫbku Highlight text and press. Ctrl + Enter
We are
Results of the week. “It's a smart tie!”Syria: Americans scare themselves, and Asma Asad buys chairs
Military Reviewin Yandex News
Military Reviewin Google News
64 comments
Information
Dear reader, to leave comments on the publication, you must sign in.