How to wean Americans from lies? 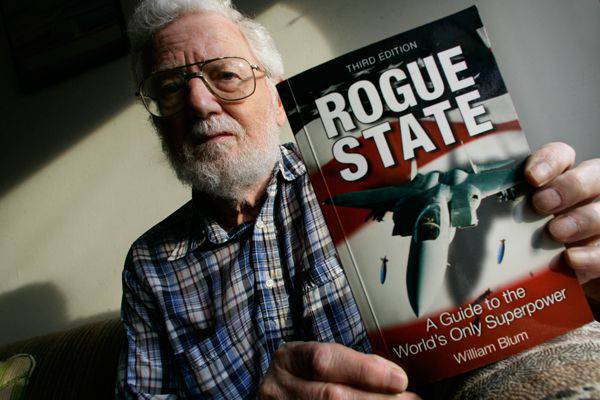 The authoritative American political scientist William Bloom will deliver a lecture in Moscow on Truth About US Foreign Policy and Today at the Center Historical Expertise and State Forecasting of RUDN University. A globally recognized expert and former US Department of State official criticizes Washington’s foreign policy. In an interview with WG, Bloom told how it feels to be a dissident in the United States and what American democratic experiments in the world can lead to.

The topic of your lecture is "The Truth about US Foreign Policy." What is the truth?

Beehives Bloom: I will call the dry residue from the impact of US foreign policy after the end of World War II: the US overthrew or removed governments in more than 50 countries; tried to kill 50 foreign leaders; bombed 30 countries; intervened in the election process in 30 countries; were involved in the commission of the largest number of war crimes and torture than anyone else in the world; and stopped emerging national movements in more than 20 countries. For the sake of global domination, the United States is ready to do anything. But still America during this time has taken into account some of the mistakes. For example, not to conduct ground operations, but only bombing is a lesson from Vietnam. But they still have not disaccustomed to overthrow the government.

Do you mean the events in Ukraine?

William Bloom: The United States is deeply involved in events in Ukraine. The new Ukrainian government can do nothing without the approval of Washington, NATO, and sometimes the EU. There was a clear task - to shift the government of Ukraine. If you look more ambitiously, geopolitically, then the goal was set - to close the NATO ring around Russia. There were not enough links in this chain, such as Ukraine, Georgia, which became the main goals for NATO and the United States. And the encirclement of Russia means the beginning of the second "cold war" —this is what all went. But Russia could not just sit quietly when this happens at its borders.

In the days of the overthrow of the Ukrainian government in February 2013, who was in the crowd of protesters? Very high representative of the State Department (Assistant Secretary of State for Eastern Europe and the CIS Victoria Nuland - approx. "RG"). And she was handing out food there. Why was this high representative of the American government on that square? She did not give out food to protesters in Washington — I myself went to protest actions in Washington many times, but she did not give me food!

What role does Russia play in the current changing system of international relations?

William Bloom: It would be great if the United States and Russia could cooperate. President Vladimir Putin has done a lot in this direction. I would like the US government to do the same, so that Washington thinks and speaks like it. If the president of the United States becomes a strong figure, if this person not only adheres to certain political views, but is courageous enough to express and implement them, then, of course, he will be able to exert a great influence on the country's foreign policy. But I don’t know if today's US presidential candidates have the courage to do this.

Now the United States is making considerable efforts to combat the "IG" (the organization’s activities are banned in Russia - RG commentary), but have not yet succeeded in this direction.

In Washington, they justify the destructive foreign policy of "American exclusivity." And many in the United States sincerely believe in it, but you - no.

William Bloom: In the United States, they use the expression “American exclusiveness” from the 18th century. Then sought to build a new empire. And the main steps towards the formation of the empire were the invasion of the Philippines and Cuba. Americans are sincerely convinced that this is the "fishing of God," which is why they speak of "exclusivity." There is the expression "the finger of fate" - this is how the United States understands its mission to rule the world, of course, to make it better and more democratic. This has been going on for two centuries now, just now it is called “American exclusiveness”.

I also believed in it, but I was brought up in this environment. Therefore, it cannot be said that I managed to avoid the fate of brainwashing. I was brought up like this, and I even went to work at the State Department to fight the "communist threat." Therefore, I am no exception. In addition, Americans are well able to brainwash. It begins in kindergartens and continues throughout life. People in America are so imbued with this that they are shocking to many when they meet people like me. "How can you doubt what we were taught?" - they ask me. But I really hope that with time the situation will change. She has already begun to change.

What made you change your point of view?

Hives Bloom: One word - Vietnam. This is the main reason why people older than 40 have changed their political beliefs. Vietnam was a turning point. If American leaders had figured out how the invasion of Vietnam would affect the outlook of Americans, they would never do that. Millions of Americans seemed to have received their sight and changed their position.

You wrote that the process of building the American Empire is still ongoing. Can I stop him?

William Bloom: The only people who can stop the United States are the Americans themselves. They need to unlearn what they have been inspired for decades. And this is part of my mission in life - to wean the Americans from this lie.

William Bloom: I am not persecuted in America. The main method that the US government uses in relation to people like me is ignoring. The only media that pay attention to me is the so-called alternative press. The major newspapers — the New York Times, the Washington Post, the Los Angeles Times — don't even mention my name. But I am not alone in the USA, millions of people share my point of view. The problem is that less than 30 percent are eligible to vote. The rest simply do not believe that something can be changed.

Hives Bloom: When Iraq fought with Iran in the 80-ies, the United States supplied a huge amount of material and equipment for the production of chemical weapons to Iraq. And Iraq ended up using weapons of mass destruction against Iranians. I found this information in the public sources of the US Congress. In America, many such facts are not secret, you just need to be careful to discover them. Of course, I could not be punished for this article, because the information was unclassified. But finding a publication ready to publish such material was not easy. There are few so-called alternative media in the United States, so my article appeared only in the left wing magazine.

We are in Yandex Zen
"Black box" Su-24. Dry residue ...
Food security of the Russian Federation. Successes and failures. Part of 3. Dry residue
53 comments
Information
Dear reader, to leave comments on the publication, you must to register.