Weapons of the Trojan War. Bow and Arrows (part six)

October 8 2015
37
The bow is one of the earliest known weapons of war, and it was also the most convenient weapon the hunter. The use of simple wooden bows and arrows has been witnessed in Europe since the end of the Upper Paleolithic period (before 10550 BC). In Greece, the bow probably appeared during the Neolithic period, although it never reached here the value and distribution it had in Eastern societies. During the period of the Aegean world of bronze, two main types of onions became widespread: simple wooden onions, sometimes reinforced with tendons, to prevent breakage and increase the strength of the bow; and a composite bow, which combined four materials: wood, horn, animal tendons and glue. Even wood was sometimes taken from different trees with different ductility. 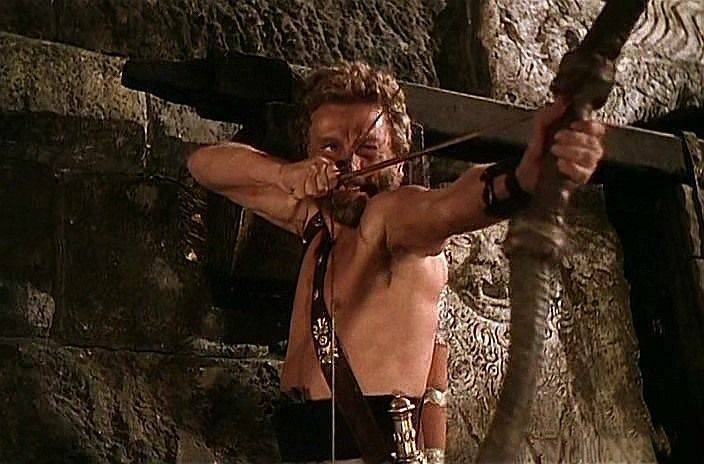 Odysseus shoots from his famous bow. Shot from the film “Wanderings of Odyssey” (1954). As Odyssey Kirk Douglas.

Simple and compound bows can be divided into several types based on their shape: simple curved bow (Fig. A); double convex bow (fig.b); double concave bow (fig. с, d,); doubly concave bow (Fig. e); a triangular bow, largely characteristic of the Middle East and Egypt, as evidenced by the images on the frescoes (fig.f, g). Some other types of bows are identified with the population that used them. For example, the Scythian bow (Fig.h), used also in Greece by the Scythian mercenaries and the Greeks themselves.

Types of bows by their form.

One of the most perfect bows of the Trojan War era of interest to us was found in the tomb of Pharaoh Ramses II, who reigned from 1348 to 1281 BC. Wood, horn and tendons were used to make it, and outside it was varnished and gilded - a luxury, of course, worthy of the great Pharaoh!

It is believed that the bows of the two types mentioned above were used in the Trojan War: simple and composite bows of the eastern type (in this case, most likely of the Egyptian type). There will be nothing improbable in the fact that some bows entirely stood out from the horns. For example, in Egypt in Abydos, a bow of the First Dynasty was found, made of two horns of an oryx antelope and jointed with a wooden handle. Likewise, it can be assumed that the legendary bow of Odyssey, which could not be pulled by any of the ill-fated bridegrooms, could also be made using horn details.

Antinous tries to make the bow more pliable and holds it over the fire, the horn just becomes softer from heating. On the manufacture of such a bow could go horn plates, carved from the horns of a wild goat, abundant vodivshiysya while in Greece, and on the islands of the Aegean Sea. Known horns, which, being composed together, had about 120 cm, that is, it is quite enough to make two extremities of them.

Based on the large number of arrowheads found in Achaean graves, as well as based on artistic images, we can conclusively argue that archery was well known from the very beginning of the Mycenaean civilization and was used both in hunting and in war. Iconographic monuments also indicate that the bow was used by both infantry soldiers and warriors who fought in chariots. It is interesting that, judging by the texts of Homer, the archers did not fight alone, but were covered with huge rectangular shields or large round shields that were carried by special shield-bearers. The high prevalence of onions in the Achaean society also indicates the presence at that time of the relevant artisans who specialized in the manufacture of bows only and who received good “salary” for their work. 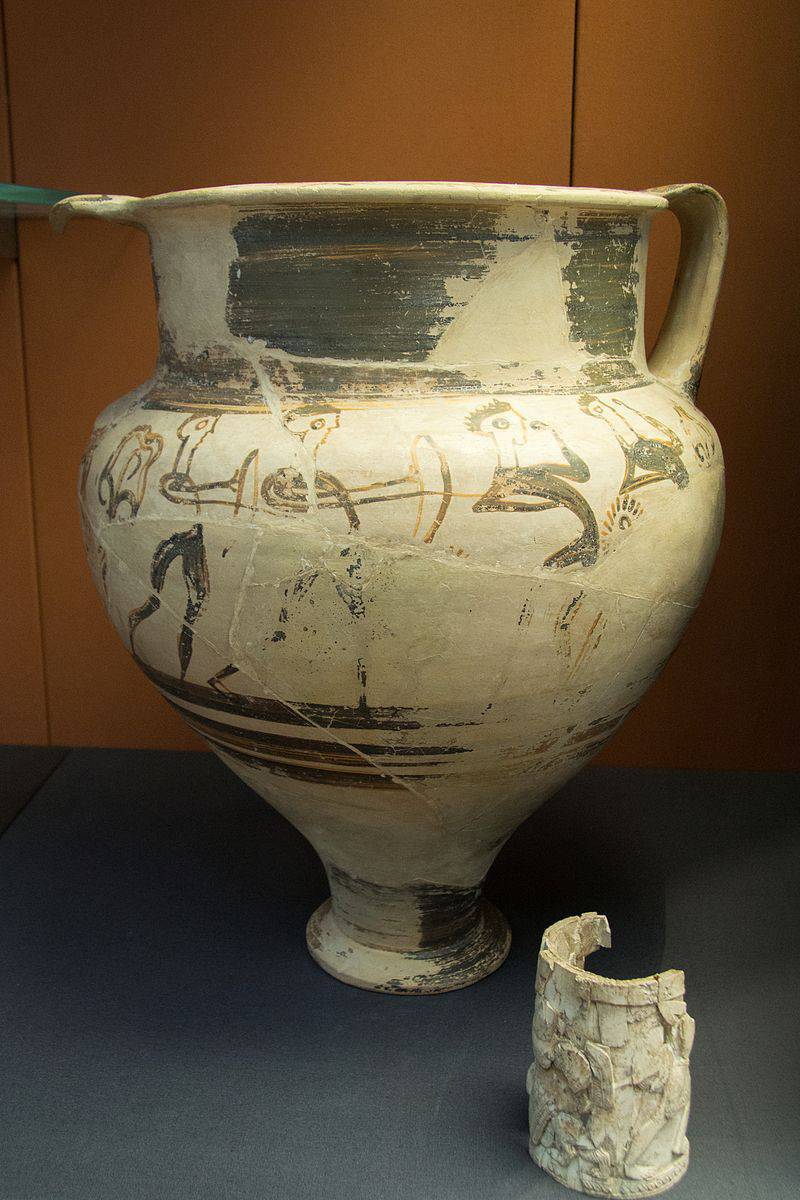 The arrowheads, found both in the excavations on mainland Greece and on the islands of the Aegean Sea and in Asia Minor, are made of different materials and have a different design. Part of the tips made of flint or obsidian.

Obsidian heart shaped tips from Pylos (around 1370 BC). Judging by the shape of the recess, they could be mounted in the shaft of an arrow either with tendons or ... just with resin in a saw cut at the end. It is possible that such a form appeared specifically so that the tip breaks off easily and remains in the wound.

It is known that such tips, as well as bone-turned, were used in war and hunting for a very long time, since the metal was expensive and losing the tips, even if they hit the enemy, was an unacceptable luxury! It is known, for example, that the English archers in the era of the Hundred Years War in the battles of Crécy and Poitiers, at the first opportunity, ran out from behind their hedges and ran to pull out their arrows from the people and horses wounded by them, although they could probably replenish their ammunition. . But no - they did just that, and not only that “the stock does not rub the pocket,” but also because there was a problem with the metal, and the stock of arrows was rather limited.

As you know, there are two main types of arrows: vtulchatye and petiole. The first ones are usually cast in stone forms, and for their production, light-flowing bronze is used. Such tips, for example, acted Scythians at a later time. 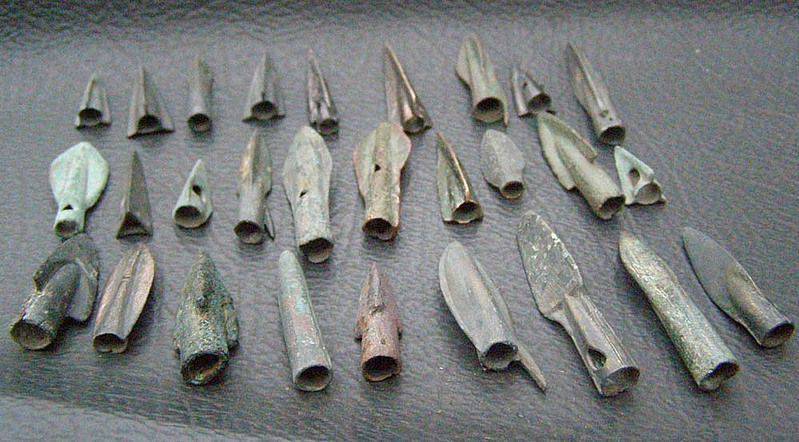 In form, they resembled either a neat sheet, or resembled a trihedron in shape, but on the side they had a sharp spike, which did not allow to extract such a tip from a wound without significant damage to it. Petiolate - more characteristic of the Middle Ages. They were made of iron and were forged, and were attached with a hole in the shaft of the arrow, where their petiole was inserted and wound outside with tendons. Interestingly, the Eurasian steppes became the place of appearance of the vtalky arrowheads. They appeared around 2 of the millennium BC. e. in the Andronovo culture. Here both the petiole and the bronze-tipped bronze tips appeared at the same time. But petioled tips then did not receive wide distribution.

Only in Central Asia and Kazakhstan with the beginning of the 1 of the millennium BC. e. they became the defining form. A distinctive feature of the Eurasian tips was the development of forms, allowing them to be easily classified. But the arrowheads of the Front and the entire Middle East are amorphous, which is explained by the different significance of this type of weapon for these regions.

Another type of tip that was encountered on the territory of Greece in Mycenaean time was a clamping tip, similar in design to the most ancient spearheads (see previous material). 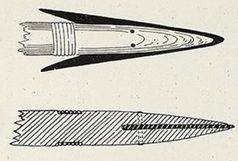 Fastening the tip of the clamping type.

It had a V-shape without a sleeve and without a stem and was inserted into the split of the pointed shaft of the arrow so that its pointed edges went out. After that, the splinter was wrapped with tendons, and ... the arrow was ready for use, and the metal itself was spent on the tip to a minimum.

As already noted, bows were used not only by infantrymen, but also by chariots. The latter practiced archery in motion, in the direction of the target (and obviously also in the wind!), Which allowed increasing the range of the boom by as much as 20%. Even women and those at that time were shooting a bow, as indicated by the images on the seals.