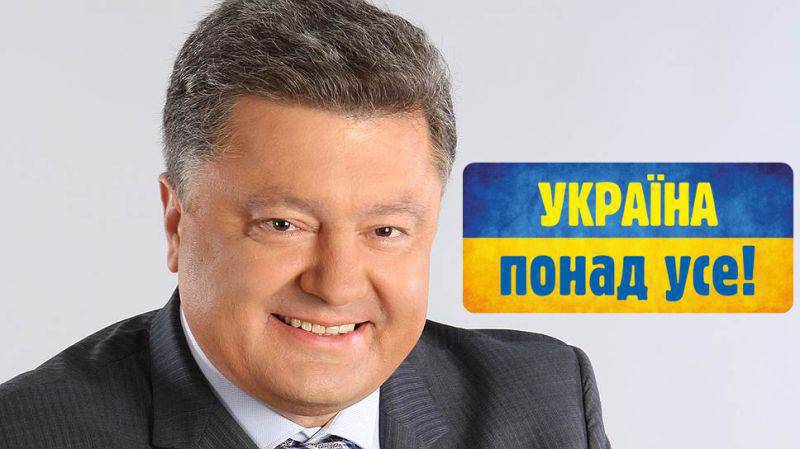 The navel of the earth is America. This is a no brainer. But Ukraine is the umbilical cord. The basis of global security. Cut it off - and the great bond of democracy and the universe will break.

“Independent democratic Ukraine, which is deeply integrated into the system of European values, is the cornerstone of security and stability in Europe and beyond. If this support is blown up, the foundations of European and global security will be destroyed ...

... the Ukrainian question is a test for Europeans for solidarity, dedication to values ​​and democracy ...

... We need Ukraine to be the top priority of world democracy. Of course, the questions of Syria, the questions of ISIS, North Korea and other problems that exist in the world remain. But these problems should not remove Ukraine from your list of priorities. We want to remain an important player in the struggle for democracy ... "

Like this. And nothing else. Do you understand up there? Has it reached you?

Need to! And no nails! Generally, how dare you! Forget it! About! UKRAINE!

Almost everyone has heard it. Or read. And almost everyone is at a loss. Well, take advantage. But they paid for it! "Hee-hee" rolled a light laugh from the General Assembly to New Guinea.

The president of an independent (oh, keep me seven!) State openly accuses its sponsor puppeteers of ... non-dependence! Just like an abandoned lover - in infidelity!

- You promised to marry me!
- Well, you never know what I promised you ...

Shouting directly from the UN main stand! Do not hesitate about anyone, not being afraid of anything ...

And because of what, actually, howl? It seems that, on the contrary, Ukraine should breathe easy - the “aggressor” turned away from nenka, he is not up to it, he is “stuck” in the Middle East. Live and rejoice!

But no. Hysterics. Hands are shaking, teeth are clanking, phrases are short, pauses are long. And this is understandable.

The default is so, a hogwash. Many know. Tried it. For the tavern pays the last one. Only. The main thing is that everyone is already full, and the last unfinished bubble is already in your pocket. On the table only napkins and toothpicks.

And you can deal with the war. If desired. And even (oh, my God!) Pravosekov clean up. It was, it was. “The Night of the Long Knives” was not invented yesterday. No more difficult than 40 millions to drive into a stall. And this is solved.

But trouble came. And, until it subsides, you can not catch up with other things. Uselessly. Useless. It makes no sense. Oh, trouble ... 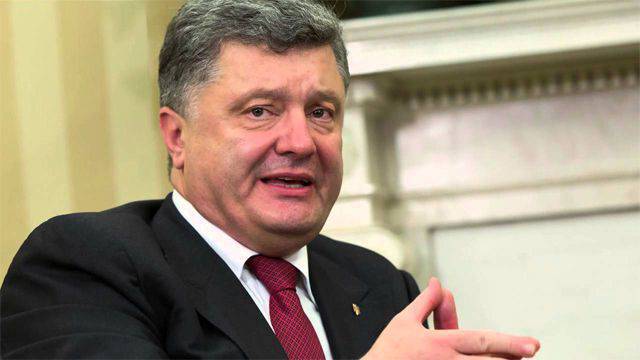 Ukraine sold everything: homeland, faith, history, the people (that part of it that did not sell). Sold everything that could be sold. More precisely, what else was paid for.

For this nezalezhnoy promised everything that only her soul wishes, and most importantly - a guarantee of security. The opportunity not only to get thirty pieces of silver, but also the opportunity to calmly, in complete safety, these pieces of silver are thirsty, drink-through. Moreover, the old relatives did not rush to betray a relative, and simply did not hurry the selling out of the common house.

And Ukraine used it to the full extent. But all good things, including freebies, someday ends.

First, it began to reach Ukraine that everything that was in the hut was devoured and consumed, and what could not be eaten was sold or mortgaged.

Then he realized that those who promised a lot of money and freedom provided only freedom, mainly from money.

Those from whom she fed, in the process, shitting them under the door and turning out the windows on the veranda, turned away altogether. From the word "in general". I tried to beat on the threshold in the role of "sick-hungry-cold." Uselessly.

While spreading her legs in front of the client for lace panties, some of the children and nephews spat and left. I decided to return by force - did not work. Erysipelas. Those who “returned” decided that it was easier to claim a percentage “for work” from her, so now there is also an ass in the blood.

Well, who ordered the music - that will pay for it? Yeah. Right now!

Those who ordered, did not satisfy the quality of cycles from the third to the seventeenth, so now, nenka, be kind to replay at your own expense.

And we don’t have to feed you - we have a lot of our problems.

And we feed these, because at first we bombed them. What "you too"? In a sense, pobombit? Oh, feed ... but for what?

... Nah, honey, we're protecting you for it. Otherwise, the neighbors whom you betrayed - sold - robbed - slandered at once to you, defenseless, beat out a tambourine.

So bow in the legs ... no, you don’t need to kiss them, you dragged everyone into your mouth, God forbid ...

You better think that you can still sell, cheaper, for one symbolic dollar ... of the Democratic Republic of East Timor. And American bucks still need to earn.

That remained Ukraine in dents from the broken trough. And here the trouble also has burst.

Russia launched an antiterrorist operation. Against those who plunged the entire Middle East into horror, the mighty European Union nightmare and spit on the fulcrum of his own creating Navel of the Earth. Beginning very successfully.

So what? And that's what.

1. What is happening in the Middle East represents a huge real threat to the whole world, even the United States, not to mention the Occupied Republic of Germany, and only a really strong country (or a coalition of countries) can deal with this problem.

2. America realized that:
a) she managed it with “tame” terrorism, and, unlike Taras Bulba, could only generate it;
b) she not only does not want to cope with ISIL and the rest of the tombs; she already cannot (for good reason Prince Tavrichesky declared to the UN - another question who is using whom);
c) it can no longer prevent Russia from restoring order in the Middle East (and in the world), at least without losses, which at this stage will be unacceptable for it;
d) it is forced to be an ally of Russia or, as a last resort, not to interfere; even she can no longer stand aside without a catastrophic loss of authority and influence;
e) you can only fight with this army (Russia), it’s useless to frighten it - Aviation The USA from the Syrian sky at the request of Russia as a broom swept out;
e) the whole world sees it and draws the appropriate conclusions.

3. The EU faced a dilemma: continue to follow in the wake of the United States and blow up Europe with the hands of refugees and Nazis, and turn into the US market itself, or cling to the hand of Russia and, hiding behind chatter about the values ​​of human beings (like Putin once about devotion to “Western ideals” ), slowly start to get out of the smelly swamp, in which they planted themselves.

4. Russia is really a strong country with the ability and desire to do what it says, and many countries like it; many are already following the course of Russia, there will be even more after the funeral of ISIS.

5. Solving the world problem of distant lands, Russia at the same time makes it clear that she will understand even at home without snotty ones.

6. Practically the whole world understood and accepted the new rules of the game; those who didn’t accept were simply spat - they could do nothing but threats in this situation.

And here it came to Poroshenko. Dry the oars, all - the final. What does this mean for Ukraine and for him personally?

1. Ukraine saw what real the attack of the Russian army, more precisely, some low-percentage part of just one of the types of the RF Armed Forces in the number of ridiculous numbers (in nenke turn in Privatbank for a pension, and then more). The most stupid scumbags realized that they really fought with the people's militia interspersed with volunteers, UkroInet exploded with revelations like "Dyakuyu Tobi, God, I'm not LIH!".

2. The independence with which the Glavkoverkha Russia makes decisions that redraw the political system, and the very map of the world; the quality and speed with which the Armed Forces of the Russian Federation fulfill these decisions; “Silence of the lambs”, with which all this is accepted by the former Gendarme and his lackeys (bleating off-screen does not count, this is the voice of the pianist) for Ukraine means one thing: the existence of Ukraine and Poroshenko personally from September 30 of this year only depends on Russia.

If, after the defeat of ISIS, the restoration of the SAR and bringing the CA, Qatar, etc., and other Russia to a normal battle, decides to enter Ukraine, this will be quick, high-quality, inevitable. And no one will stop her. No one dares to leave his army to protect Petit.

And the fate of Poroshenko now depends personally on Putin Vladimir Vladimirovich and no one else; from other former owners - only if they decide to slap him themselves, early.

That's why he howled. In a voice. Obama and his sixes made it clear - if in the current situation the question “Ukraine or Russia” comes up - we will choose ...

And this is the main thing that Poroshenko understood. Oh, Peter-Petyunya, what did you get into? Now really all. “They deceived, ruined, defeated, and now they have merged. Not Putin - Donbass, and Europe - me !!! Obama! But you promised!!! I did everything! God, for the sho! "

Have you seen those eyes? This horror and doom in its purest form. 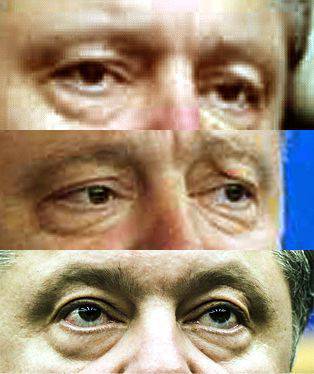 The only thing that could have caused Poroshenko's bracing appearance noticed by journalists after the meeting of the Normandy Four in Paris - if he, having calculated the situation, collapsed on his knees in front of Putin as soon as the door closed. And in response, he heard: “If you save the country, you will live.”

Or, like an inveterate war criminal, he sewed a vial of poison into his collar and swaggers: “You will not see me on the gallows!”

I can be mistaken - but for my opinion two more lights of democracy, two great people (oh, mom!) Of two great states, stand as a mountain.

“Latvian President Raimonds Vejonis fears that because of the situation in Syria, everyone will forget about Ukraine. He stated this in an interview with The Wall Street Journal ...
The President of the Republic of Estonia, Toomas Hendrik Ilves, called on the EU from Syria not to forget about Ukraine ... ”

If Russia will deal with one global problem with the global problem that 60 coalition governments could not solve, then no one will have the right to climb into the hallway to Russia with instructions on the topic “here, in the corner, not too often!” Well, whoever takes the risk - they will send him that way ... that the rest will only take away the eyes. And silently!

And if the Russians, looking Europe straight in the eyes, dismiss the nenka on the repacking, then for the Baltic Pug, what happens, even the toad will not kumknet.

Especially if, before this, among the “settlers” adopted by the Baltics, ISIS militants would be exemplary fished out. And you never know? The energy security of the EU locomotive (and, consequently, of the whole of Europe) depends, nevertheless, on the safety of the Nord Stream passing next to Estonia, and not the rusty UkrGTS ...