November 5 2015
11
The life of Indians - the indigenous peoples of North America, is the subject of study of many researchers: ethnographers, historians, cultural studies and many others. This is not surprising, since the culture, customs, traditions, beliefs of Indian tribes are shrouded in a halo of secrets, mysteries, and, at times, are not subject to the understanding of ordinary inhabitants. All the more curious to find out history the life of John Tenner - a man at an early age abducted by the Indians and who knew all the primitive communal relationships in the wild. 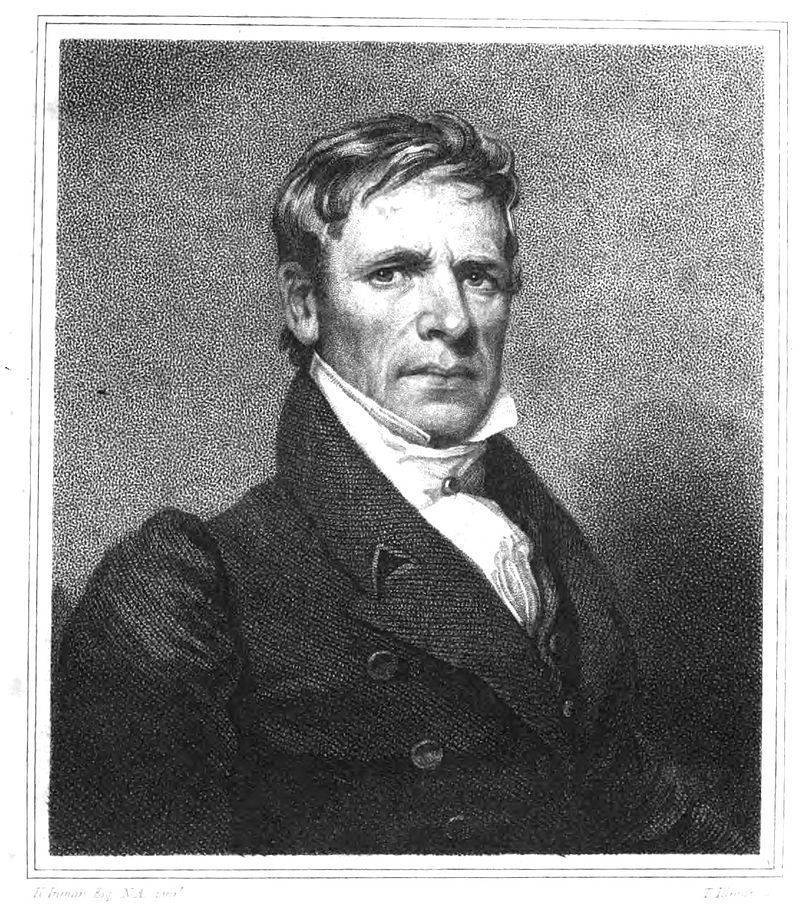 John Tenner after returning to the civilized world. Written by Edwin James.

A man named Falcon
The harsh conditions of existence had a profound effect on the way of life of the indigenous peoples of North America. To survive, they had to adapt to the environment in which they lived. Often, in order to provide the family with everything they needed, the Indians had to overcome both pain and fear and go for a wide variety of tricks. For the Indian tribes were characterized by attacks on the colonial villages. They killed the “whites”, took them prisoner, took the livestock behind them, and sometimes just shot cows and horses to weaken their enemies and deprive them of the ability to exist normally in the mastered lands. During one of these raids, John Tenner was kidnapped, who later had to live 30 years in the Ojibwe tribe under the name Show-show-wah-ne-ba-se (Falcon). 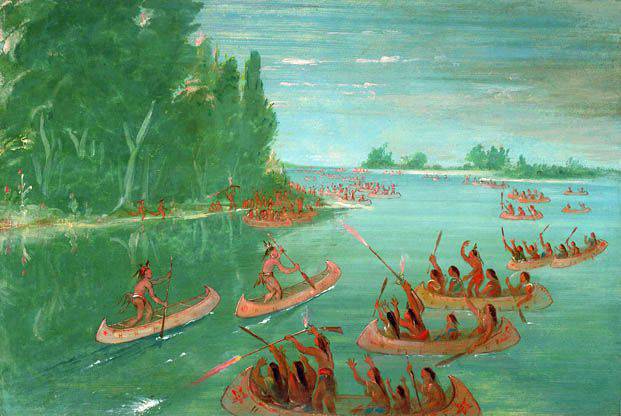 Canoeing race among the Ojibwe Indians near Sault Ste. Marie. 1836

Alien child - your child
In those days, it was common for Native American families to take foster children for guardianship. The fact is that the mortality rate among the indigenous people of North America was quite high, and not everyone could endure such harsh living conditions dictated by wildlife. Therefore, often, a mother who could not survive the loss of her offspring raised a foster child as her own. He replaced her own child. The same thing happened with John Tenner.

Caught in a primitive community rather early in life, Tenner easily adapted to the way of life that was characteristic of the Indians of North America. He gradually adopted their customs, acquired the skills necessary to survive in the forest and hunt wild animals, the rules of communication and interaction with other Indian tribes. Having virtually no contact with the mainland's English-speaking population for a long time, John Tenner forgot his native language and spoke exclusively in Ojibwe, the language of the Ojibwe Indians, the third most common Indian language in North America. The “white man” became part of the Indian family and could no longer imagine his life outside the harsh reality of hunter-hunters. 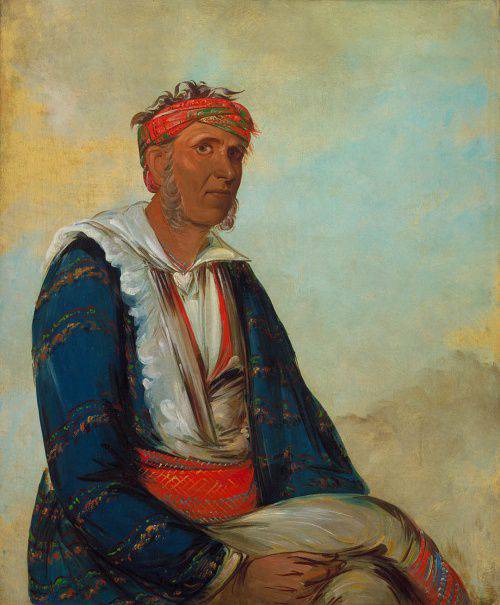 Coleigh is the Cherokee leader.

"White Indian" tells ...
Speaking about his fate, John Tenner paid special attention to the most mysterious aspects of the life of indigenous peoples. He described in detail the unique customs, ceremonies, in which he himself was directly involved. So, the central place in the life of Indian tribes was occupied by the hunt, which gave them everything necessary for life: food, clothing, furs. They delivered the skins of killed animals to the buyers, and in return received the necessary goods: weapon, gunpowder and bullets, traps, clothes, and alcohol, which was the main tool for manipulating Indian hunters, because for the sake of one keg of rum many literally got rid of furs for nothing. It happened that after a successful transaction with merchants, the hunters got drunk before they lost consciousness, were deprived of all the things necessary for survival, which sometimes led to death. 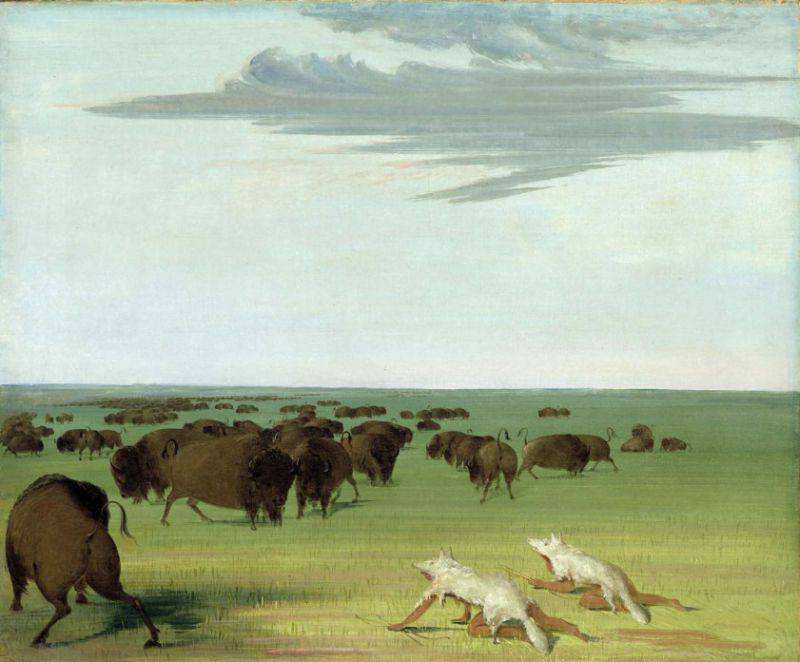 Killed a bear - became an adult!
John Tenner described in detail Indian customs associated with hunting. For example, an event in which sooner or later every novice hunter becomes a participant and which happened to the hero himself, namely, the killing of a bear. From his story (and the story about Tenner’s life among the Indians was written down, and no one else than Pushkin told her to the Russian reader!), The first killed bear is an important event in the life of the Indian youth. It was after this that the hunter began to be treated with respect and considered him an adult. On the occasion of such a successful hunt, a solemn meal is organized, to which all the families of the tribe are invited. The meat of a dead bear is divided equally. 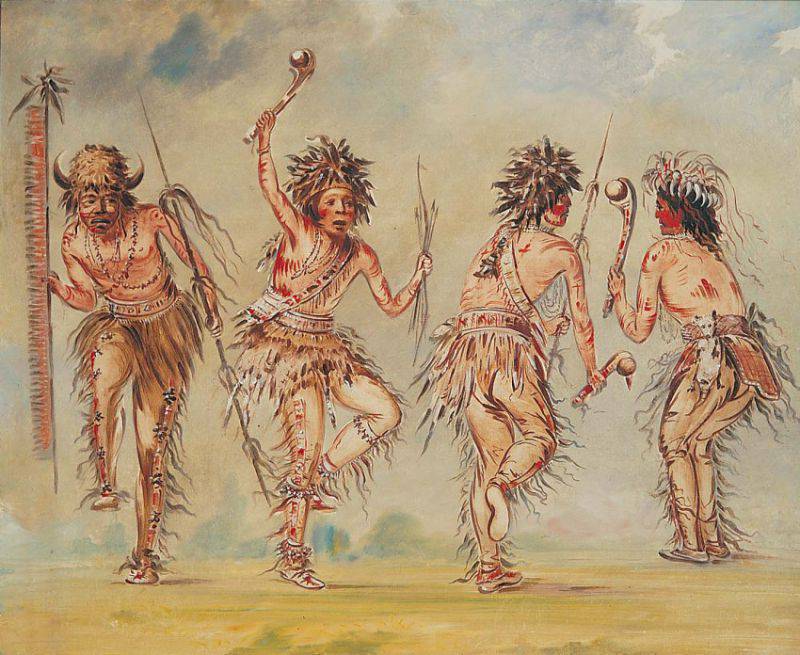 "Indian Collectivism"
Among the Indians, the principle of collectivism and mutual aid was one of the most important, and its non-observance was considered unacceptable, since it was this rule that helped the indigenous peoples to survive. John Tenner described not only cases of collective distribution of prey, but also collective hunting. The law of hospitality was also considered mandatory. If one group of Indians was starving, while the other had food reserves, the first joined the second and these reserves were shared equally among all. This principle was tried to strictly observe, but as in any society among the indigenous peoples of North America there were also apostates. As Tenner himself described them, they "living near the whites were so badly infected with the spirit of haggling that they did not want to feed the starving tribesmen for nothing." But there were not so many such cases. 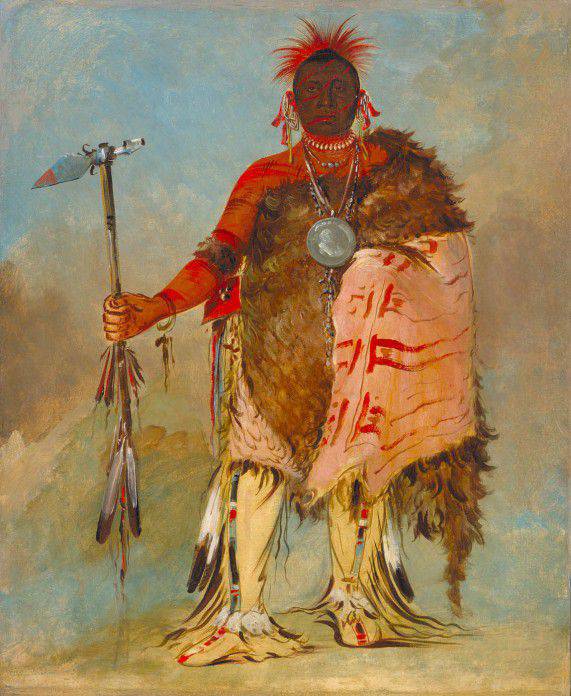 Along with the principle of collectivism and mutual assistance, there was also the principle of blood feud. He obliged a murdered relative to avenge any man of the murderer's kind of revenge for him. Moreover, the victim was often a person who was not at all involved in the crime, moreover, did not even know anything about him. This is quite a cruel law. But the Indians were obliged to observe it, because a person who did not revenge for a murdered relative, until the end of his life, became an object of ridicule and suffered from harassment from fellow tribesmen. 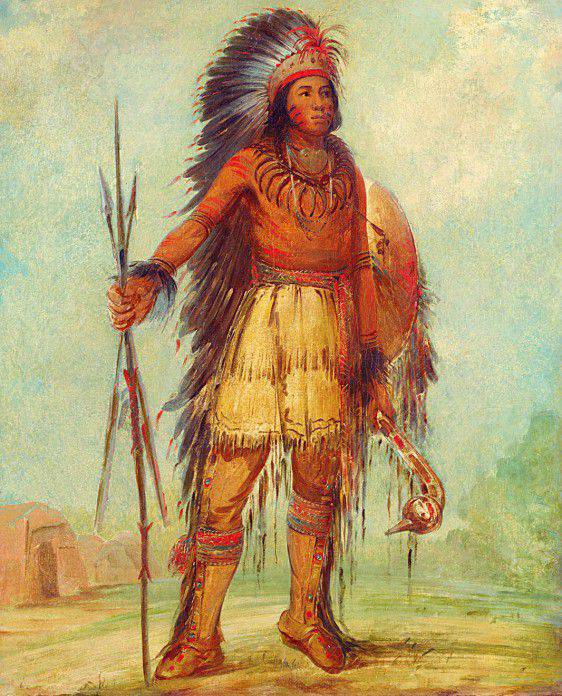 About faith in the Great Spirit ...
During his stay in the wild, John Tenner was on the verge of death several times: from hunger, encounters with predatory animals, squabbles with other Indians, and only by a miracle did he manage to survive. Among the Indians was spread faith in the "Great Spirit", which supposedly since ancient times is the patron saint of all the peoples of North America. He created all life on earth, gives the Indians strength and endurance when they are on the edge between life and death. Tenner was more skeptical about believing in the Great Spirit than his fellow tribesmen, but still his ideas about the supernatural largely coincided with the Indians. Although he trusted less to the prophets, who often appeared among the Indians and, acting on behalf of the Great Spirit, prescribed certain rules of conduct for them, which they had to follow strictly. He also did not always trust his instincts and dared to resist predictions. However, John Tenner often saw prophetic dreams in which certain signs appeared to him, or, for example, he visited in a dream those places that were most beneficial for hunting. Such prophecies often saved the Tenner family from starvation. Therefore, faith in the miracle and the supernatural, which was an integral part of the life of Indian tribes, did not bypass Tenner himself. 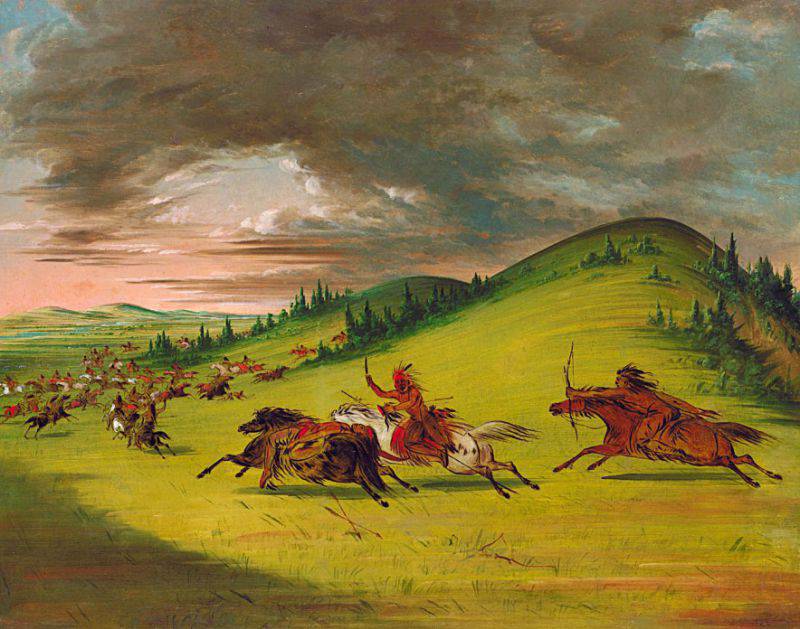 Native American Wars
In addition to hunting, farming, fur trade, the life of the Indians was also accompanied by military campaigns. The fact is that not all tribes lived in peace and harmony. Many were tied up by an inveterate and incessant hostility, established since time immemorial. Every man who participated in a military campaign, had to pass the rite of initiation into the warriors. Of course, John Tenner had to participate in such rites. The young man had to follow a number of rules in the first three campaigns. The future warrior had to always cover his face with black paint and wear a hat. He was supposed to not overtake the older ones while walking. If any part of the body is itchy, then it was only allowed to scratch the bitch. It was also forbidden to anyone except the warrior himself to touch his knife and dishes. Under the ban was the adoption of food and rest before dark.

It is curious how the Indians raised the morale of the participants in the military campaign. The scouts, who were ahead of the detachment in the territory of the enemy, did not miss a chance to search the abandoned tents or the parking places to find a children's toy there. Such a toy was shown to a warrior who lost a child with the words: “Your little son is there, we saw him playing with the children of our enemies. Do you want to look at him? ”After these words, the grieving father was ready to tear the enemy to shreds. 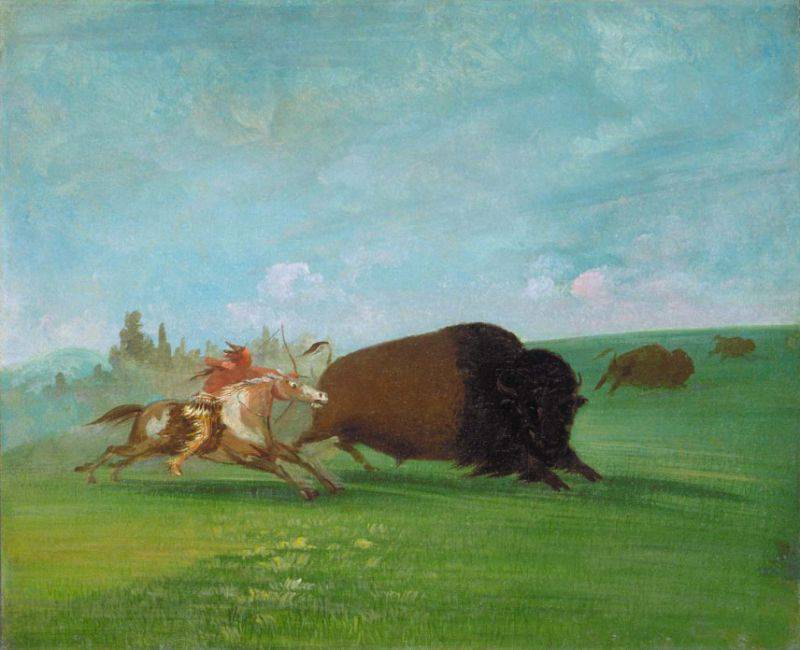 "Tarzan" returns to the people ...
John Tenner has lived in the wild for 30 years. His life among the Ojibweans ended only in the 1820 year, despite the fact that the thought of returning to white often visited him. But only when the existence among the Indians became completely unbearable because of the advancing wave of capitalist colonization, Tenner decided to return to his native place, as he was increasingly indicated that he belonged to another race. He became an enemy for those whom he had always considered loyal friends and allies. But the United States has also become a foreign country for the white Indian. There he felt even more alone than in the forest, because Tenner did not succeed in reconciling with the norms of the capitalist society. John turned out to be superfluous on both sides of the barricades, and his fate was tragic. He died all alone after 20 years after returning to the whites.

Ctrl Enter
Noticed oshЫbku Highlight text and press. Ctrl + Enter
We are
Reservation. How US Indians survive and try to fight for their rightsGenocide of the Aborigines of the New World
Military Reviewin Yandex News
Military Reviewin Google News
11 comments
Information
Dear reader, to leave comments on the publication, you must to register.