October 7 2015
56
Lance is certainly one of the oldest species. weaponsif not the most ancient. However, the cudgel can be considered the most ancient, only a spear, and especially a flint-tipped spear, a more perfect thing. When did the first spears appear? Science can finally speak out on this subject quite definitely. In eastern Africa, ancient spearheads were found. They are approximately 280 thousands of years old, that is, they are 80 thousands of years older than the earliest remains of people of the modern species Homo sapiens and 200 thousands of other samples of similar artifacts, which until now were considered the oldest examples of such products! They were discovered in the Gademota Formation on the slopes of a destroyed rift valley volcano in central Ethiopia. Today this area is a mountain range that rises above one of the four reservoirs of the rift valley - the picturesque lake Zivay. For most of the middle Pleistocene (roughly 125 – 780 thousands of years ago), there was a “mega-ozero” that united the four present ones. Paleontologists found numerous remains of antelope and hippopotamus and 141 tip from obsidian. They were studied by Jonathan Zale of the University of California, and the object was the tips of precisely throwing weapons, for which damage to them was examined. The fact is that at the moment of impact, V-shaped cracks form on the obsidian plates. And the top of this letter "V" marks the point from which they spread. The narrower the "wings" "V", the higher the rate of formation of cracks in obsidian. That is, in the first case, the spear was driven into the victim, and in the second, it flew into the target, being thrown by a strong hand. 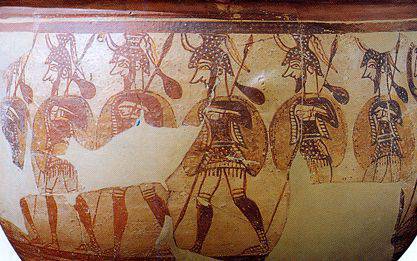 The famous image of the "March of the Warriors" on a vase from Mycenae. Pay attention to the leaf-shaped tips and strangely shaped pennants on spears.

Obviously, the invention of throwing weapons was a giant step forward compared to direct strike weapons (stone tips for percussion copies appear in the archaeological record about 500 thousands of years ago). Now hunters were able to attack at a distance, which sharply reduced the risk of dying when approaching a potentially dangerous animal (bull or hippo) and significantly expanded the range of prey itself. Prior to this discovery, it was believed that throwing weapons appeared about 60 – 100 thousands of years ago. The oldest dart found was 80 thousands of years. Behind them came a bow and arrows, as well as a spear thrower (atlatl). It seemed quite logical that all this was invented by none other than Reasonable Man, because it is much more difficult to invent and manufacture throwing weapons than piercing-cutting. And as soon as these weapons appeared in the hands of our ancestors, they relatively quickly settled the rest of the world, displacing other members of the Homo genus from it. However, new data destroy this coherent picture, and they say that not only our immediate ancestors, but also representatives of some other, more ancient African population used darts. Samal himself believes that the creator of the most ancient darts was most likely the Heidelberg man - the most likely ancestor of the Man of Reasonable and the same Neanderthals.

One of the oldest tips of the Achaean time dating from 2700 - 2300. BC, and found on the island of Amorgos in the Cycladic archipelago.

But you should not get upset if we never find out whether people of the genus Homo sapiens adopted this weapon or invented it themselves. It is much more important to know that this period (200 – 300 thousands of years ago) was very important in human evolution: new anatomical features and more sophisticated tools appeared, indicating a change in his behavior (and, accordingly, thinking). Apparently, it was then that people started talking. Do not pay attention to the fact that this find was made in Ethiopia. They could invent them anywhere and anyone. The main thing is that in the time so remote from us the ancient people could easily fight at a distance! Although the same stone tips already in our time were used by primitive peoples by no means always. For example, spears of Australian aborigines are most often all-wood, that is, they represent a simple pointed stick! Exactly the same trophy - a polished wooden spear with a harpooned wooden (!) Tip was mined in 1779 in the Hawaiian Islands in a battle with the islanders, where Captain James Cook was killed. In the Solomon Islands, the spikes on the tips of the spears were bone, however, the spears with carved wooden tips were also in use there and ... why not use our remote ancestors in the Stone Age in exactly the same spears, because they had all the materials for their manufacture !

So having such historical "Hurt" in the past, it is hardly worth surprising that the ancient Cretans and Achaeans also used spears and darts. So, during excavations of early Greek settlements, such as Sesklo and Dimini, belonging to the early and middle Bronze Age, spearheads were found in large numbers, and in general they are found quite often.

Another similar tip from the Cycladic Islands.

There is a classification of spear points found in their era, but it is not as interesting and intuitive as the classification of swords, so it hardly makes sense to give it here. But according to the main characteristics, this type of weapon deserves a detailed description. So, judging by the iconographic data, the spears were of three main options: very long, rather long and short. 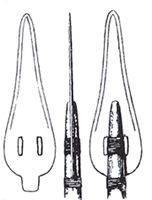 The first, which could be in length from 3 to 5 m, and used mainly in the early periods, even if their use is confirmed in the Iliad. They could have been the weapons of the infantrymen who held them with both hands and acted against them both against the enemy in the war and against the dangerous animal during the hunt. Most likely, these spears were equipped with large bronze tips. On the contrary, shorter spears were used at all stages of the late Bronze Age. Short spears used for throwing and during melee or hunting. Often they can not be distinguished from the darts, that is, special throwing copies.

As for the finds of spearheads, one of the earliest specimens found on the territory of the Aegean world is a leaf-shaped copper tip dated to 2700 - 2300. BC, and found on the island of Amorgos in the Cycladic archipelago. Interesting is the shape of this tip and the method of its attachment in the shaft. It is obvious that he was inserted into a cleft or cut (see fig.) And was attached to the shaft with a rope or tendons. It is possible that such a fastening was fragile and easily “loosened up”, therefore such tips were soon (relatively, of course!) Replaced by another - a petiole. Between 1600 and 1200 BC such petioch tips made of copper and bronze spread throughout the Aegean world and replaced the tips of the previous type. 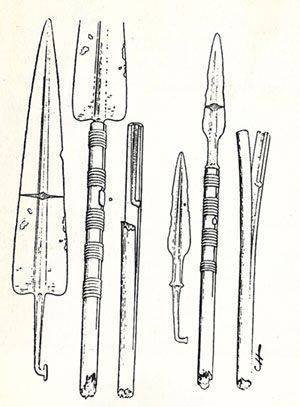 The originality of thinking to the authors of this attachment can not be denied. It is obvious that a hole with a hole was made under the petiole in the cleft for removing the cap of the petiole on one side. Then the petiole itself was smeared with glue, the hoofed animal was most likely inserted into this hole, and the split itself was wound up again with a rope or tendons. Such a mount was much stronger than the previous one, so it was more convenient to act with such a spear both in battle and in hunting. The tip itself has also become stronger. A noticeable longitudinal rib appeared on it.

At the end of the late Achaean time there were already vlachatye tips, simply put on the pole. They were different forms - leaf-shaped, with a lenticular profile, with a rib and without a rib, and faceted, often cruciform in cross section.

Short darts were used not only for throwing, but also in hand-to-hand fighting, as the fresco from Pylos visually speaks about, where one of the combatants thrusts his opponent into the groin. It is interesting that although the warrior himself is almost naked, he again has a boar’s helmet on his head, and on his feet are shoes that cover the foot and leggings. 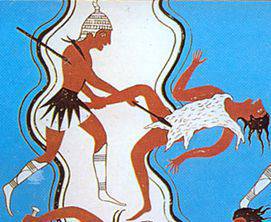 In a similar way - that is, with a short dart or spear, the warrior wearing a leggings, a “boar helmet”, and a “t-shirt” on a fresco from Mycenae is also armed. 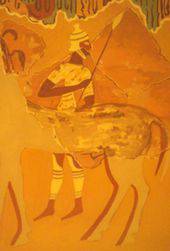 But this trident was found during excavations of the Achaean settlement near Hala Sultan Tekke in Cyprus and dates from the XII century. BC. This is hardly something military. Most likely, such triad beat fish.