October 1 2015
12
28 September became aware of the capture by the Taliban militants of the city of Kunduz in northern Afghanistan. Government forces had previously left the city in order to avoid civilian casualties. The Afghan military admitted that the Taliban attack was the largest operation in recent months. Kunduz is the capital of the northern province of the same name bordering Tajikistan. Experts believe that terrorists can completely seize the province, which creates a threat to Russia, which is a partner of Tajikistan in the CSTO. 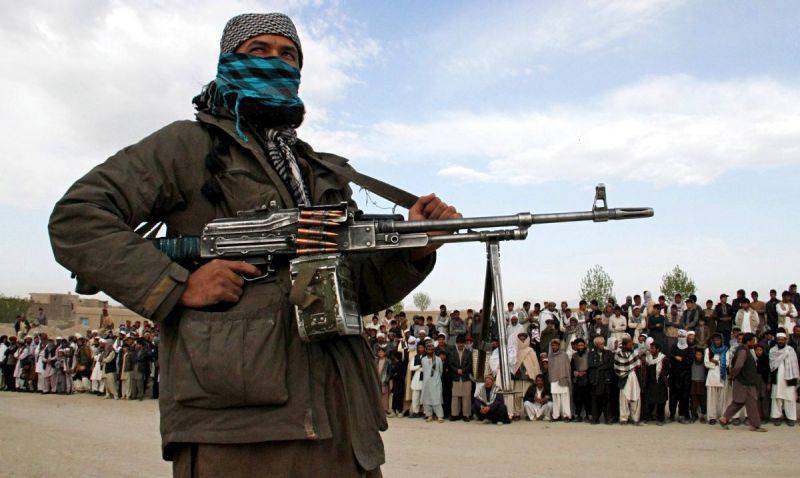 According to media reports, the battles for Kunduz killed at least twenty people. The Taliban consider their city and are ready to "defend".

The reason for the "defense" they have.

The Ministry of Defense of Afghanistan has announced the arrival of forces in the city, which have been ordered to conduct a military operation on the release. 29 September media reported on the release of the city prison (from which the militants had previously released prisoners) and provincial police.

For other objects, the information may not be accurate. Some media claim that the attackers managed to seize some private banks, others subject this "news"Doubt. Among the captured buildings are listed the office of the UN mission in Afghanistan, a number of government facilities, a hospital and a security office. There is also information (according to eyewitnesses) about the burnt city radio station.

Finally, it is reported that the Taliban militants seized the residence of the governor of Kunduz.

The government of Afghanistan is trying to win the city. Additional government forces were sent to Kunduz. 29 september afternoon "First channel" announced the start of the operation to release Kunduz.

Before the attack of the Afghan troops, American planes attacked the militants' positions. However, the Taliban, according to the Afghan command, arranged positions in residential buildings and socially significant objects. The civilian population, as usual among terrorists, has become a “human shield”.

on September 30 RIA News" With reference to TOLO News, it was reported that as a result of air strikes inflicted by the US Air Force on Islamist positions in Kunduz province, at least 160 Taliban fighters were destroyed.

According to the deputy head of the provincial council, Faiz Mohammad Amiri, on Wednesday night, militants tried to seize the city’s airport. The country's security forces were able to repel the attack. “The militants retreated after the response of the security forces. Command troops arrived by air in the city of Kunduz, but we are still waiting for the ground troops, ”Amiri explained.

Why did the Taliban capture the city?

This question was answered by the former head of the IRA National Security Administration, Amrullah Saleh. His statement appeared September 30 on the site "Afghanistan.ru".

The main reason for the fall of Kunduz was a conspiracy involving top officials, according to Saleh. Without naming the alleged perpetrators, he expressed confidence that several hundred militants would not have been able to seize the well-fortified entrances to the city.

“The Afghan media say,” writes Afganistan.ru, “that even a few days before a major attack, Governor Kunduz Mohammad Omar Safi went to Tajikistan, where his relatives were waiting for him. In a number of reports it is mentioned that at the moment the official managed to cross another state border, heading for London. ”

Members of the Afghan parliament criticized the central government. They accused the authorities of prolonged disregard for security problems in the north of the country. In addition, parliamentarians committed attacks against the "fifth column", the activities of which allowed the terrorists to seize Kunduz.

Information about the transfer to the UK governor confirmed by other media. Omar Safi fled to Europe after the Taliban captured the administrative center, reported RIA News" with reference to the Pazhvak agency. According to the agency, the governor went to the UK.

A number of Afghan parliamentarians, said RIA Novosti, called for the death penalty against members of the provincial government who allowed the seizure of the city.

Some experts believe that the Taliban are able to completely seize the province. President of the Institute of the Middle East, a political scientist Yevgeny Satanovsky told the newspaper "Sight" on the threshold of a Taliban breakthrough to the Central Asian republics.

“In the north of Afghanistan, from the border of Turkmenistan to Tajikistan, heavy fighting has been going on for the past year and a half. The entire border strip, except for large cities, is completely captured by militants from various organizations and groups. In addition, it is not entirely clear which militants belong to the Taliban, the Islamic Movement of Uzbekistan or the Islamic State. Uighur combat groups are also present there. All of them are activated after the Americans completely leave Afghanistan, ”the expert believes. “There is some threshold for the invasion of militants from the north of Afghanistan into the Central Asian republics,” says Satanovsky. “This is called the Central Asian Spring.” This will allow cutting off pipelines that go from Turkmenistan to China. From the point of view of Washington’s interests, this is a great idea. ”

Another opinion was expressed to Vzglyadu by an expert from the Center for the Study of Modern Afghanistan, an expert on the Middle East, Andrei Serenko.

He recalled that the Taliban had repeatedly stated earlier that they could take control of Kunduz. However, this would require not only military, but also civilian efforts. The Taliban are not yet ready for this, the expert believes.

The armies of Afghanistan also provide substantial support to the Americans: “The United States support for the forces of the Afghan army and police boils down to two things: providing intelligence with the help of American intelligence agencies that have a wide intelligence network, and most importantly - delivering air strikes with aviation».

Why then did the militants attack the city?

According to Serenko, the Taliban conducts similar operations usually on the eve of negotiations: “This is a kind of muscle demonstration by the Taliban. The radicals used to act in exactly the same way: before the negotiations in Qatar or Pakistan, they carried out a massive offensive, thereby showing their strength. On the other hand, it is a kind of response to the actions of General Rashid Dostum against the Taliban in other provinces. Now rumors about a new round of negotiations. I think that the Afghan authorities will try to seize the initiative and go to the counterattack. ”

According to the expert, the "absolute operators" of events taking place in Afghanistan remain the Americans. “And it's not just the number of US troops,” he said. - They have a serious influence on the political class. The American lobby is stronger than Iranian, Russian and even Pakistani. The United States has been able to form the political and military class of Afghanistan for themselves over these thirteen years. ”

Which of these can be concluded? Americans are Americans, but the central government in Kabul shows almost complete inconsistency. It becomes clear that with the complete withdrawal of American forces from Afghanistan, not only Kunduz, but also Kabul would not have lasted long.

There is clearly no reason to talk about an increase in the US contingent in Afghanistan: now Washington is focused on the situation in Syria and Iraq. The White House already admits an alliance with Russia and Iran, and even the preservation of B. Assad in power in Damascus (for a while), if only to ensure effective counteraction against the terrorists from the “Islamic State”.

Who will help Afghanistan fight the Taliban? Are the Russians again? That is unlikely. In addition, the Russians are also busy: they are helping Syria.

Apparently, the Kabul rulers and strategists will have to defend themselves against the Taliban on their own, while relying on the power of American air strikes. President Ashraf Ghani Ahmadzai has nowhere to go: otherwise the Taliban would someday come to his palace.

By the way, Ahmadzai took over as president of 29 September 2014 of the year - exactly a year ago. Obviously, the Taliban militants with their attack “celebrated” the anniversary of his reign.

Observed and commented on Oleg Chuvakin
- especially for topwar.ru
Ctrl Enter
Noticed oshЫbku Highlight text and press. Ctrl + Enter
We are
"IG" in Afghanistan. Will the war come to Central Asia?Why Uzbeks and Tajiks do not take the world
Military Reviewin Yandex News
Military Reviewin Google News
12 comments
Information
Dear reader, to leave comments on the publication, you must to register.