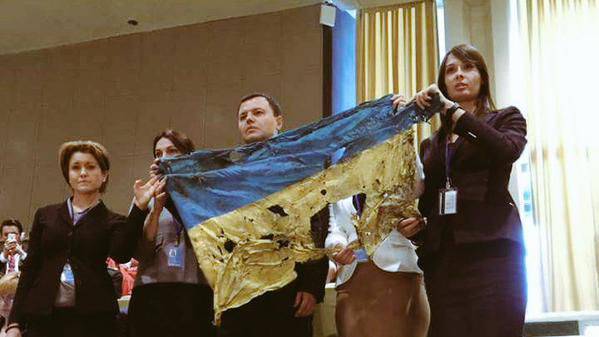 True, during the Poroshenkov speech, one diplomat from Russia still remained in the hall. The Russian side decided to listen to the opponent. Unlike the Ukrainian, who still does not know how to listen and does not want, hoping for the protection of influential owners.

But "svidomye" would not be themselves, if it were limited to this. They needed a brighter show. You need to shake something, since you can not jump.

And as a subject of shaking, a leaky Ukrainian flag was chosen. The representative of Ukraine, Yuriy Sergeev, wrote about this almost as a feat: “The flag of Ukraine from Ilovaysk was unfolded on the balcony in front of him [Vladimir Putin]! Let him see. ” This flag was shot not just anywhere, but in Ilovaisk - where neo-Nazi punishers suffered one of the most offensive, crushing defeats.

Well, since Poroshenko himself is very impressive, as he thought at one time he was shaken from the platform by a fragment of a bus from Volnovakha (shot under very mysterious circumstances, which most resemble provocation), then why not shake the flag from the Ilovai boiler? Moreover, one cannot be proud of “peremogy” - it does not exist. So, you can try to be proud of what is - in defeat. To expose Ukraine in the form of a victim, sufferers.

However, there is another version of this demarche, in which Ruin appears to be a sufferer even more. The Ukrainian delegation, contrary to the reports of Yuri Sergeyev, did not come out of the room itself, but helped her. For waving this very leaky flag. Nevertheless, the General Assembly is not the Maidan, although for some people it is felt everywhere.

"People's Deputy" of Ukraine Anna Gopko said: "Through a quiet protest with a shot-out flag during Putin’s speech, badges were taken from us and asked to leave the General Assembly." Well, this is not peremoga, but the real Zrada.

Indeed, what else can be presented to Ukraine before the international community, besides this miserable, torn flag?

The Ukrainian delegation will not present the fragment of an apartment building in the city of Snezhnoye, which was bombed aviation punishers last July. Then several residents of the house died, among them a little girl ...

It is impossible to ukrodelegatsii to submit a bottle on the General Assembly, from which Christina Zhuk from Gorlovka gave Kira a little milk to drink. The girl and the child were then found dead - torn by Ukrainian projectile.

Or maybe a delegation from Ukraine could bring the shoe of 11-year-old Katya Tuv, who was killed already this year, 2015, in the same Gorlovka? When her father died with Katya, the mother's arm was torn off, and her brother's face was disfigured ...

And not to demonstrate there, in the face of the UN General Assembly, the wreckage of buildings from Kiev Avenue Donetsk? The once beautiful avenue, on which you are walking today, as if on the set of a post-apocalyptic film ...

Or, maybe, to show everyone the stones of the destroyed houses and enterprises of the same Ilovaisk? And Debalcevo? Uglegorsk?

It is clear that the Ukrainian delegation will not be shaken by this from the podium - it is a shame. This could be done by the Russian delegation if it were inclined to such demarches.

And Ukrainian - it remains to wave the flag in the holes. Unwittingly recognizing that punitive nevertheless sometimes get in the teeth. And even very significant.

After all, the executioners came to Ilovaysk under this flag by no means with friendly intentions. Not surprisingly, they had to get out of there with a battered army and a battered symbol of Ukrainian statehood.