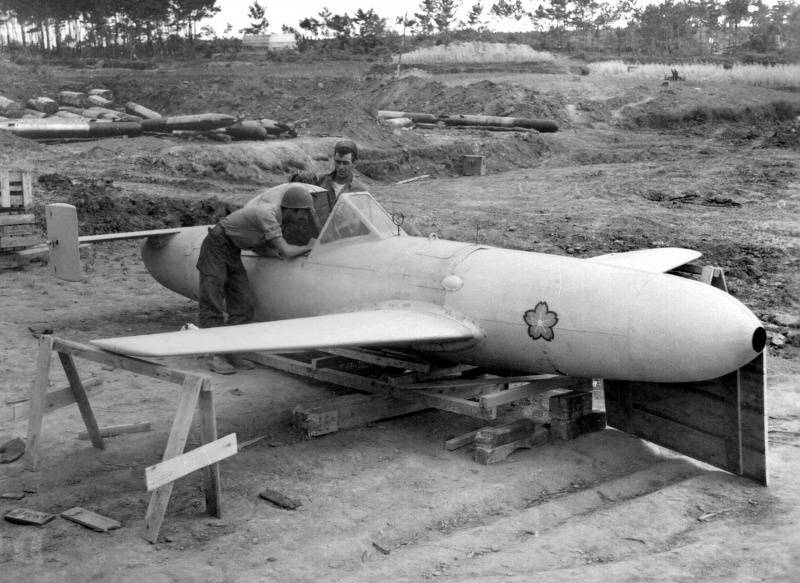 This year marks 70 years since the day of the unconditional surrender of Japan in World War II. Japan’s brutal aggression against China and many Asian countries, the outbreak of war against the United States and other Western countries in the Pacific, in parallel with preparations for war with the USSR — all this was initially a doomed adventure of militaristic circles that then completely ruled the country. However, even when in the course of the war the inevitability of defeat became apparent to everyone, the military-political elite of Japan intended to fight "until the last Japanese", relying on "a miracle weapon, About which little is known so far.

It is believed that during and immediately after World War II, there were only three atomic projects: German, American and Soviet. But in fact there was another one - Japanese. Long-forgotten documents about Japan’s attempts to create an atomic bomb during this war were recently discovered at Kyoto University. According to experts, they confirm the existence of a secret program in the country and could shed light on the level of research in the field of the creation of the Japanese atomic bomb.

Newly found documents, dated between October and November 1944, were stored in the research center of the specified university. Studies on the creation of equipment for the enrichment of uranium - the key to the creation of atomic weapons, were recorded in three notebooks.

Two programs are known that were implemented in Japan with the goal of creating atomic weapons during World War II. In one of them, carried out by the Imperial fleet Japan, code-named "Research F," was attended by Bunsaku Arakatsu, a professor at Kyoto Imperial University (the predecessor of the current University of Kyoto), and other leading scholars of the university.

Another program, run by the Imperial Army of Japan and known as Research No. 2, was headed by Yoshio Nishina, a physicist at Tokyo’s Rican Institute.

According to Japanese experts, compared with the developments that took place in Riken, there are few documents regarding the research conducted at Kyoto Imperial University. The notebooks found apparently belonged to Sakae Shimizu, a researcher who worked for Arakatsu.

From the documents found it follows that a group of scientists at Kyoto Imperial University was trying to create equipment for the separation and enrichment of uranium-235. The notebooks contain tables, calculations on equipment and photographs of foreign scientific works related to the topic of research. Also among the detected papers was a document with a list of materials used to create equipment for enriching uranium, and data on the length and diameter of the components and parts of this equipment.

After the atomic bombing by the United States of Hiroshima and Nagasaki, the Japanese military leadership demanded that their atomic scientists create an atomic bomb within six months. At the same time, they hoped that precisely such a period Japan would be able to hold out after the landing of American troops on the main territory of the country and then turn the tide of battles in their favor with the help of this bomb. However, the scientists' response was discouraging: due to the lack of uranium and other necessary resources, a bomb can be created not in six months, but in six years.

But less than a week after the atomic bombing of Nagasaki, as Japan accepted the terms of the Potsdam Declaration of unconditional surrender. True, the decisive role in this was played not by the atomic bombs dropped by the United States on Hiroshima and Nagasaki (in preparing for the battle on their territory, the Japanese assumed that the American atomic bombing would continue), but the Soviet Union’s entry into the war against Japan and the lightning-quick defeat of the most powerful Soviet forces. Kwantung Army in Manchuria.

As for the stage to which Japan reached to create atomic weapons, the Americans who occupied it after the war may know about it better than others. They confiscated most of the Japanese documents containing information on the development of the atomic bomb.

The US military gave the nickname tank bombs (idiot bomb) to one of the outlandish weapons that Japan used to launch suicide attacks in the last days of World War II. In Japanese, it was called “Oka” (cherry-sakura flowers) and was the first Japanese jet aircraft operated by a pilot. He carried in the nose explosives weighing 1,2 t and was intended to ram the enemy ships. The plane was transported under the belly of a ground-based bomber "Type 1", which, when approaching the target, produced the "Oka". The subsequent deadly for the pilot, the peak on the enemy was romantically associated with the Japanese with a falling sakura petal.

Although the Oka could reach a maximum speed of approximately 1 thousand km / h, it had a limited range, so separation from the bomber in any case meant the inevitable death of the pilot. Reactive kamikazes were used in the Okinawa battle of 70 years ago.

The US armed forces that landed on Okinawa in April 1945, totaled 550 thousand people. Taking advantage of their overwhelming superiority, they began military operations to completely destroy the enemy. Japanese troops sent their limited capabilities to the sinking of American aircraft carriers and other ships. A key component of this strategy was the use of suicide attacks by kamikaze pilots, including the Oka units of the navy. However, the Oka succeeded in sinking only a handful of enemy ships. American troops steadily improved their air defenses and were confidently able to eliminate the threat posed by kamikazes on jet planes.

The last battle involving the Oka unit took place on 22 on June 1945, when a squadron of carrier bombers with six Oka planes flew out of the city of Kanoi, Kagoshima Prefecture on 5.30 in the morning. Four of them were soon shot down by American fighters, and the remaining two returned. The battle in which the Japanese lost 32 man, ended in their complete defeat.

In preparation for a protracted war on the main islands of their territory, the Japanese placed rail launchers on the ground (in particular, apparently, not by chance in the mountains near the city of Kyoto, where, as already mentioned, the atomic bomb was developed). From them could also be launched into the air available rocket planes, controlled by suicide pilots. However, due to the accelerated capitulation of Japan, they never had to fly up.

"Fusen Bakudan" - bombs on balloons, were high-altitude explosive and incendiary devices that were sent by the Japanese across the Pacific Ocean in the direction of North America. They silently and unexpectedly fell from heaven to earth where necessary and had the goal of terrorizing the local population. Initial news about unknown weapons gave rise to speculation about the landing of the Japanese on the territory of the United States, but soon all reports of strange objects suddenly disappeared.

After 70 years after the end of World War II, Japanese bombs on balloons are still little known for a number of reasons. They were created by the Japanese army under strict secrecy, since its navy suffered heavy losses in 1944 and was no longer able to strike at the United States. Japanese aircraft carriers did not have enough fuel to reach the desired distance to the main territory of the United States, and the land army did not have long-range bombers.

The US government also censored all new reports of balloon raids on US territory. It threatened to bring to justice those who spread rumors about them, regarding this as aiding the enemy. The US Department of Defense destroyed most of the evidence about these bombs. Although ultimately they caused very little damage to the United States, given the scale of the war.

After an air raid on Tokyo in April 1942, the first American bombing of the main Japanese island of Honshu, Japan wanted to respond by any means. The Japanese army initially considered a plan for loading high-altitude balloons of plague viruses, but then decisively abandoned this plan for fear of harsh revenge from the United States. True, who knows, it could have been exactly the opposite: in response to the ruthless atomic bombings of Hiroshima and Nagasaki, the Japanese could have sent plague and other terrible diseases to the USA as a terrible retaliation. Indeed, in the Japanese-occupied Northeast China, where the well-known 731 Detachment conducted its barbaric activities outside the reach of the American army, the Japanese created and accumulated a large number of bacteriological and chemical weapons. It is possible that only the rapid defeat of the Kwantung Army by the Soviet Union did not allow them to use these weapons against America.

Due to the shortage of raw materials, balloons were made from specially processed traditional Japanese washi paper. They had a diameter of 10 m and were filled with hydrogen. In this case, the balls were supplied with an automatic device, which made it possible to regulate the filling of gas with them in accordance with daily temperature fluctuations. After dropping bombs, they had to self-destruct using other charges.

Made so ingeniously, these aeronautical vehicles delivered conventional and incendiary bombs across the Pacific Ocean over a distance of 10 thousand km to the United States in a few days. Their route was calculated by Japanese meteorologists considering the air flow over the ocean. According to Western experts, Japanese fusen bakudan was in many ways the world's first intercontinental weapon.

According to some reports, from 7 to 10% of the total number of 9300 bombs launched on balloons in the direction of North America, were able to cross the ocean. Of these, all 300 have reached the continent. Only a few people became their victims - an American pastor, his wife and five children who went fishing for a picnic. Japanese propaganda inside the country presented raids with the help of balloons on the territory of the United States as "powerful blows to the enemy on his land."

And on the site of the death of the pastor's family in Oregon in 1950, a monument was erected with the inscription: "The only place in the Americas where death was the result of enemy actions during World War II." Until 11 September, 2001 was just over half a century.

Ctrl Enter
Noticed oshЫbku Highlight text and press. Ctrl + Enter
We are
Not a musical "Bazooka" at all. Part of 1Guided bombs for the Luftwaffe
Military Reviewin Yandex News
Military Reviewin Google News
19 comments
Information
Dear reader, to leave comments on the publication, you must to register.