October 7 2015
35
1942 year, Leningrad. The blockade city steadfastly holds on with all its might. But, besides the fascists, it was precipitated by lice and rats. And if it was possible to fight the first, and quite successfully, the second ones turned out to be a real disaster. Sometimes, on the same street, the townspeople saw whole columns of rodents; there is a known case when a tram got off the rails because of them. 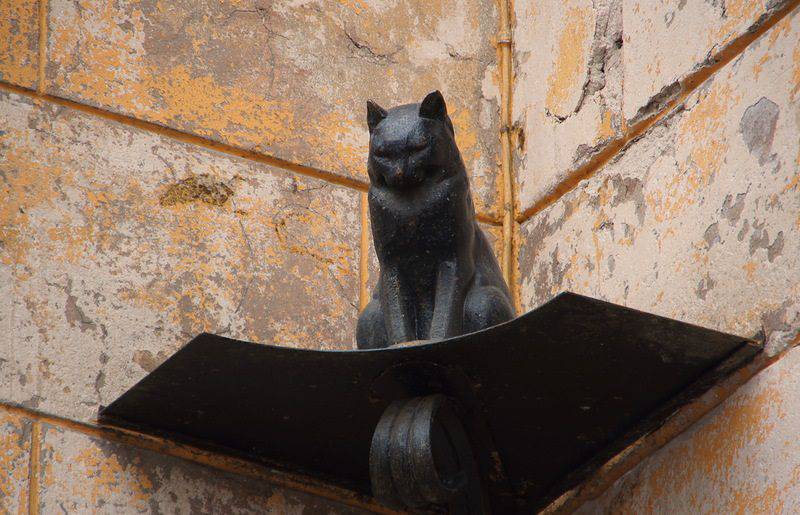 Of course, people fought with rats: they poisoned them, tried to scare and shoot them. But the efforts were in vain. Rodents were crushed by trucks and even tanksbut it also did not bring success: tailed creatures safely ran away, and there were also those who deftly climbed on wheels and tracks and rode astride cars. They were not even afraid of the constant bombing, fire, the rumble of aircraft. The recollection of the townswoman Kira Loginova has survived: “The darkness of rats, in long lines headed by their leaders, moved along the Shlisserburg tract (now Obukhovskaya defense avenue) directly to the mill, where they ground flour for the whole city. It was an organized, smart and cruel enemy. ”...

Remains of food supplies ruthlessly destroyed by these pests. In addition, the threat of epidemics has become a terrible reality.

Leningraders ate almost all cats and dogs in the first months of the blockade. In the markets, this meat was very expensive. True, there were those families that saved their Murzik and Barsik, but now this number of cats was not enough to defeat the thousand hordes of rats.

It became clear that we need live cat help from outside. And then in April 1943 of the year a resolution was passed signed by the chairman of the Lensovet about the need "to discharge from the Yaroslavl region and deliver smoky cats to Leningrad." Why precisely smoky? In those years, they were considered the best rat catcher.

Yaroslavl completed a strategic order. They caught homeless cats on the streets, and many gave up their pets to fight rats. And here arrived in Leningrad four waggons.

From the memoirs of Antonina Alexandrovna Karpova, a native Leningradka: “The news that cats are being delivered to the city today has instantly spread all over. People gathered in huge crowds at the station, there was a terrible crush. Many came to the platform in whole groups (mostly, they were families or neighbors) and tried to disperse throughout its length. They hoped that at least one of the group would manage to take a cat.

And then came the composition. Surprisingly: four carriages of cats broke apart literally in half an hour! But how happy were the people of Leningrad going home. It seemed that these were not ordinary cats, but fighters of our Red Army. Some powerful reinforcement. And even the day it seemed that the Victory was already close. "...

However, many townspeople did not have enough cats. Now they were sold on the market at a fabulous price equal to about ten loaves of bread. For reference: the kitten cost 500 rubles, and the janitor’s salary was 120 rubles.

Sadly, a significant part of Murzik and Barsikov died in the fight against rats. However, even with heavy losses, they managed to drive the rodents away from food stores. The terrible misfortune did not recede, but its forces were greatly reduced.

Yaroslavl cat army defended Leningrad until the blockade was lifted. And when the ring was broken, another “mustached mobilization” took place, because the rats had to be driven out completely. Now the tailed warriors have written them out for Siberia itself especially for the Hermitage and other museums and palaces.

Siberians responded to the call with the same zeal as Yaroslavl. The very first volunteer was a black and white cat nicknamed Cupid. The hostess brought him to the assembly point and handed the guard with a farewell "to fight the hated enemies." In total, over five thousand cats and cats from Tyumen, Irkutsk and Omsk arrived in the city on the Neva.

Now, by common forces, Leningrad was finally saved from rats.

From the memoirs of Antonina Alexandrovna Karpova: “Our neighbor got a Siberian cat, who was named Bars. At first, Leopard was very afraid of loud noises, it was felt that he had suffered the fear during the journey. At such moments he rushed headlong to a new mistress. She soothed the cat, stroked it. And gradually Bars was filled with a new family with great respect and love. Every day he went fishing and returned with loot. At first they were rats we hated. And then Bars contrived somewhere to get sparrows, and there were no birds in the city during the siege. Amazing: the cat brought them alive! Sparrows neighbors slowly released.

Not once did Leopard take anything from the table. He ate what he got on the hunt himself and what the new owners treated him with. But the food never begged. It seemed that the cat understood that he had come to the city, where people experienced the terrible agony of hunger "...

Famous and amazing история about a red-hearing cat who settled with an anti-aircraft battery near Leningrad and very accurately predicted enemy raids aviation. The soldiers said that the cat did not react at all to the approach of Soviet technology. As a reward for the service, the battery commander put the cat up to a special contentment and even allocated a fighter to look after the tailed warrior.

And in the Hermitage "served" the cat, who discovered the old, but the current bomb. The mustache-striped, finding the danger, softened so loudly that the museum staff came running up to the noise and, seeing what was the matter, called the miners.

By the way, in the Hermitage cats still live. There are about fifty of them, and everyone has a real passport with a photo and an honorary position as a specialist in the cleaning of museum cellars from rodents.

The article used the memoirs of the former director of the Lipetsk school No. XXUMX, Antonina Alexandrovna Karpova, who was born and raised in Leningrad.