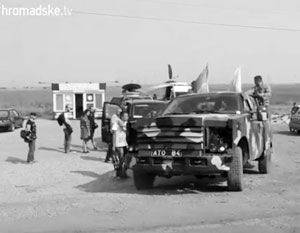 It is not only the rifle that disappears from the warehouses of the Ukrainian armed formations. weapon, which accounts for thousands of trunks, but even armored vehicles. The SBU is investigating the case against the commanders of one of the units of the National Guard, who have written off and sold cars. And on the armored jeep sent to the Canadian diaspora, a deputy of the Verkhovna Rada is now driving.


The SBU said that the chiefs of one of the units of the Ukrainian National Guard removed the combat-ready military equipment from the combat zone in the Donbas, writing it off as battle losses.

"Yesterday's heroes of the type of the same Parasyuk are already beginning to seriously lurch, because many have been sins"

"Militiamen documented the illegal write-off of military property and equipment for combat losses, which in fact was taken out of the area of ​​the antiterrorist operation and hidden in the territory of the Odessa region in one of the military units," the special service said. A criminal case.

This statement was made against the background of the scandal around the extra-fractional deputy Vladimir Parasyuk, who appeared at the rally on the so-called blockade of the Crimea. Ukrainian users of social networks drew attention to the armored jeep chosen. The number gave him a car, transferred in November last year to the Ukrainian armed forces fighting in the Donbass Canadian diaspora. The car received a "battalion" "Dnepr-1". Her fate is now being investigated by Ukrainian volunteers, who raised a scandal.

“Unfortunately, this is a massive phenomenon,” independent journalist and blogger Anatoly Shary, who emigrated from Ukraine because of the authorities' persecution, told VZGLYAD. - Today, for example, a “hero” was buried in Sumy, who brought a grenade home and blew himself up. He was buried in the alley of honorary citizens. With military equipment all the more serious, it was the opposing side, perhaps this. "

“People are sending armored vehicles to support ATO, and suddenly it turns out that they are driven by such“ field commanders ”who rent apartments in the center of Kiev for budget money and are in the Verkhovna Rada, he continued. - The fact that the Parasyuk mind is not very much and that he lit up on it is one thing. But here the reaction of the radicals is interesting. Yesterday's heroes of the type of the same Parasyuk are already beginning to stagger seriously, because many have been sins. Dissatisfied with those who were with them, but received less. Gutted at his time at home, offices. Where did all the loot from Pshonka’s house (Yanukovych’s Attorney General under Yanukovych-approx. LOOK) or Yanukovych go? It's all sold out. I personally was offered, for example, a Yanukovich suit. Brioni, 500 dollars in total. " He drew parallels with the French and Russian revolutions. “We have observed the 17 year, but there will come another 20, the red terror that ours will fall under, and there will be the 37 th. Only now it is getting faster, and we are already seeing the 37 offensive, when they are putting their own ones, who were fought on Kolchak fronts, ”noted Shary.

He recalled that, according to official data, the number of serious crimes in Ukraine has increased sevenfold, and directly connected it with the weapon that surged from the ATO zone: “It’s not a problem to buy weapons. If I were not afraid to get under the article, because they are just waiting for me to attach something to something, I would have bought a gun in Kiev as an experiment. For 500 dollars you can buy a good gun, grenades in general for ten dollars. Kalashnikov assault rifles are offered for about three hundred dollars. And the closer to the zone "ATO", the cheaper.

When they start saying that a weapon permit will help reduce crime, it makes me laugh. Weapons must be able to use, and we need a mentality that has been developed over the years. Plus, in many states of America there is a serious question that weapons fall into the hands of inadequate citizens. Inadequate citizens in Ukraine Nemer. So giving up a weapon is just awful, ”Shary concluded.

Cases when the Ukrainian soldiers who appeared in the "ATO" zone, originally disposed of military property, were noted many times. The most famous was the sale by the National Guard under two combat helicopters Mi-24Р with weapons. Armed men who secretly take out small arms and grenades from the ATO zone are regularly detained at railway stations in Ukrainian cities.
Weapons removed from the Donbass regularly appear in the criminal chronicle. In early May, a shoot-out chase occurred in Kiev, which resulted in the death of three people. Two masked men, threatening with weapons, attacked a gas station. When the escaped criminals tried to detain, they shot a patrol from a machine gun. The criminals were former fighters of the "battalions" of "Azov", "Tornado" and "Aydar". Shortly thereafter, in the Kharkiv region a former member of the "ATO" threw a grenade into the car with people, which did not work.

According to the Lostarmour website, where the lost Ukrainian armored vehicles are being counted, during the armed conflict more than 800 armored vehicles of the Ukrainian formations were destroyed and more than 400 captured. The data appearing in the reports of the Kiev military commanders are not disclosed, so it’s not possible to determine how many cars could disappear while being written off on securities.

With small arms is still more difficult. Petro Poroshenko himself admitted that thousands of trunks were removed from the "ATO" zone. According to him, 4,5 thousand weapons were returned to the Ukrainian military, however, given the quality of the Ukrainian law enforcement system, it is clear that this is only part of what went for a walk on the territory of the former USSR.

According to the data voiced by the head of the Kiev police Alexander Tereshchuk, the influx of illegal weapons in Kiev has recently increased tenfold. “Today there are a lot of weapons in Kiev. Its illegal turnover in the capital has increased lately, not even in 20 and not in 30, or maybe a hundred times. If, say, talk about robbery, then almost every case - with the use or threat of firearms. These include pistols, machine guns, grenades, and even grenade launchers, ”he said. “Recently, it has become“ fashionable ”to send weapons and ammunition by commercial postal organizations, therefore we are working in this direction,” he added.

“Everything repeats,” the former State Duma deputy of Russia, Lieutenant General of Police Alexander Gurov commented to the newspaper VIEW. - In Russia there was once a civil war. Until 1927, they fought gang violence. During World War II a lot of weapons dragged. There was the shooting of the White House, the weapons were also stolen decently. It's in human nature: what is bad lies, let me take it just in case. And here at all Klondike! People can take a weapon not only out of curiosity, but also for the purpose of their own protection, because the situation in Ukraine is such that there is no one to look for protection, and everyone understands this. The fact that the Ukrainian authorities are taking away weapons and arresting is welcome. ”

“The consequences will be very difficult, and not only for Ukraine,” he continued. - There will be an increase in banditry, an increase in resistance to the authorities, and moreover armed. I suppose that there will be a terrorist aggression against Russian cities, citizens, etc. Because they just don’t take weapons. ”

Ctrl Enter
Noticed oshЫbku Highlight text and press. Ctrl + Enter
We are
How they traded weaponsWhat you didn't want to know about England
Military Reviewin Yandex News
Military Reviewin Google News
34 comments
Information
Dear reader, to leave comments on the publication, you must to register.