23 September 2015
65
Such a genre of fantastic literature as postapokaliptika is very popular now. The authors depict the collapse of civilization for one reason or another, the beginning of an era of general chaos and decline. The finale of humanity comes so quickly and ruthlessly that the survivors are not internally prepared for such changes. From the old world are literally crumbs: household items, weapon, instruments. Some mechanisms. But all these already meager reserves are finite. No production base, lost knowledge and technology. There are no masters and scientists capable of reincarnating this or that thing from the past life into metal.


Modern Ukraine increasingly resembles a country that has experienced, if not an apocalypse, then, in any case, a major natural disaster. Last week there was once a routine event for the city of Nikolaev - the opening of the bridge. Two ships of the Ukrainian Navy came to repair the 61 Communard plant: the Priluki missile boat (launched in Leningrad in 1979) and the border guard ship Grigoriy Kuropyatnikov (Yaroslavl, 1984 year). And everything would be fine, only the Ingulsky Bridge, under which both ships should have passed, ... did not divorce. For local residents, the breeding of the bridge is a rare sight to this day. By 12 hours of the day 16 September gathered the public. But nothing happened. Having rotated at the “closed door”, the boat “Priluki”, in the end, turned and left.

The authorities explained what happened in this way. A week before the described events, a specially invited Kiev company, using, as was said, “new technologies”, carried out repairs of the asphalt pavement of the bridge, during which “obviously, the bridge lifting mechanism was damaged”. The mayor of the city, Y. Granaturov, forbade attempts to build a bridge until “a complete clarification of the reasons”. From the point of view of a resident of the “post-apocalypse universe,” it seems that a technical artifact of the “civilization of giants” has failed and now it is necessary to call upon priests who have pieces of ancient knowledge.

Truly, only the “civilization of giants” could build such a powerful engineering structure with a movable span of 76,2 meter (the largest in Europe). Construction began on 1974 and was successfully completed on 1981. 6 November 1981, the Ingulsky Bridge was officially officially opened.

The Soviet Union at the turn of the 70-80s did not know such an annoying absurdity as the production crisis. The country built ships. The plant named after 61 Communards, or “61st”, as it was called in the city, was fully loaded. The BOD series of project 1134B has been completed, construction of the missile cruisers of project 1164 (the Atlant project, the current Moscow and its sisterships) has begun, construction of the project 557 rescue ship, the Octopus code, the future Elbrus, is underway. There are orders for civil fleet Soviet Union. The city is full of military, scientists, engineers. The bridge was bred almost weekly - in addition to the shipyard, it also carried out ship repair activities. Life was boiling on the river, floating cranes, tugboats, and other ships moved between the plants. 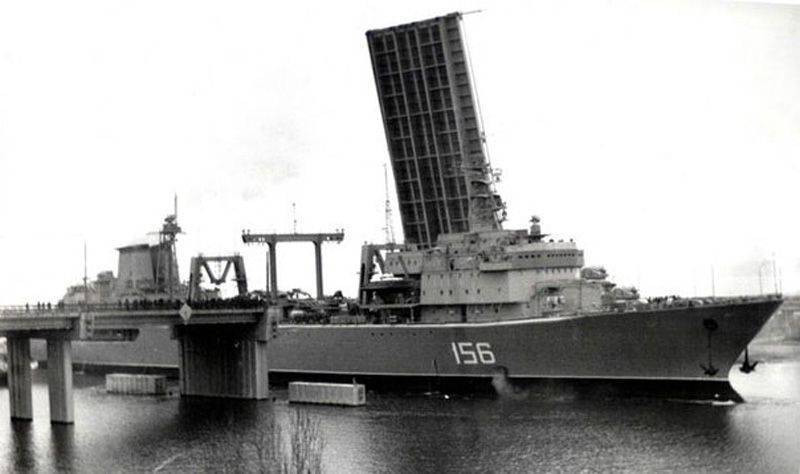 The middle of the 80's. The bridge is divorced normally. The ship of complex supply "Berezina" passes under the Ingulsky bridge

And all this time the bridge worked fine.

But howling over the country “winds of loss, partings, offenses and evil”, unkind winds of “freedom”. An entire epoch has left the city, and ships have left the waters of the 61 plant of the Communard. First, the military, then civilians began to disappear. 19 July 1999 year after the protracted repair the plant left the missile cruiser "Moscow", who was there for almost 10 years. His brother of the same type, "Admiral of the Fleet Lobov", now called "Ukraine", rusts against the extension wall. The fate of this ship, obviously, will be sad.

The shipbuilding industry of the independent Ukraine turned out to be, like the infamous cruiser, cut off by a slice (as the commander of the Naval Forces Haiduk aptly put it), which slowly but steadily withered. The economic crisis that began in 2008 and the WTO accession had a devastating effect on the 61 communard plant. He became engaged only in ship repair. The territory of the enterprise begins to run wild, overgrown with shrubs and trees. With the sockets of empty windows, unfinished workshops are gazing. By the way, the plant at the turn of 1980-90-x was planned to radically upgrade, expand the production base, build new buildings.

But, as it turned out, a new public education, proud of the many thousands of years history, the world's best lard and gold Polubotka, which no one has ever seen, does not need such a troublesome and complicated thing as the shipbuilding industry. And, as in the novels about the decline of history, it became easy to eat, break, wear what it inherited.

The newest history of Ukraine cannot boast of technical successes and achievements. There is no list of bridges, factories, power stations erected during the bright time of the Square. Those ships and ships, which until recently had already been completed and built, either belonged to the Soviet projects or were built for export.

In recent years, the plant finally began to resemble one of the locations of the well-known computer game STALKER. Rust, debris and dirt. It is symbolic that in the waters of the oldest shipbuilding enterprise in Nikolaev that gave life to hundreds of ships, August 6 2012 sank the dry-cargo ship Vasily Shukshin who arrived for scrap metal. The incident brought a loss on 4 million hryvnia in the then prices.

The newest times and completely tightened the noose. For a long time, the plant’s vital activity was largely provided by the funds allocated for the maintenance of the Ukraine-class missile cruiser, which was formally excluded from the fleet a long time ago, but it was impossible to give orders to cut the ship in almost 90 percent readiness even to the descendants of the ancient ukrs. So is "Ukraine" neither alive nor dead. Funds for its maintenance helped to survive to the team that was reduced to several hundred people. For contrast, during the time of the "totalitarian" USSR, almost 61 thousand people worked at the plant named after the Communard 16. He was the "smallest" of the three shipbuilding enterprises of Nikolaev, who lost the title of the city of shipbuilders. Now it is a city of overgrown stocks. Numerous specialized research institutes mutated into ordinary office centers. Vocational schools have disappeared. The era of sales managers and sales assistants did not need assembly workers, pipe benders, and markers.

Since the beginning of 2014, funding for a cruiser that has been transformed from a ship into a fixed displacement object has ceased.

In the autumn of 2014, the plant was involved in order fulfillment for the needs of the Armed Forces of Ukraine. It consisted in the manufacture of ... stoves, stoves. Comedy, quickly passing through the stage of farce, turned drama. Originating as the cradle of the Black Sea Fleet, launched sailing ships and frigates, armadillos and dreadnoughts, cruisers and submarines, the plant in the final turned out to be involved in the production process comparable in scale to the activities of a small craft artel.

And although the day of the city this year was held under the motto "Nikolaev - Sail of Ukraine", embroidery and wreaths on this day were more than inconvenient references to the fact that the city grew around the shipyard that built ships for the Black Sea Fleet of the Russian Empire.

The savage from the post-apocalyptic novel arranges a corral for livestock in the wreck of a spaceship. Uses an artifact, inherited from a lost civilization, because of its understanding and need. Sitting on a debris, fallen off from a rocket, looks at the stars. He has millennia of development ahead of him, when man will be able to surf the ocean and space again. New savages, who still remember how Nikolaev escorted the ships from his native harbor, did not look at the ocean’s distance, nor at the stars. It is doubtful that they will be able to create at least a stockbreeding base on the basis of a high-tech skeleton. 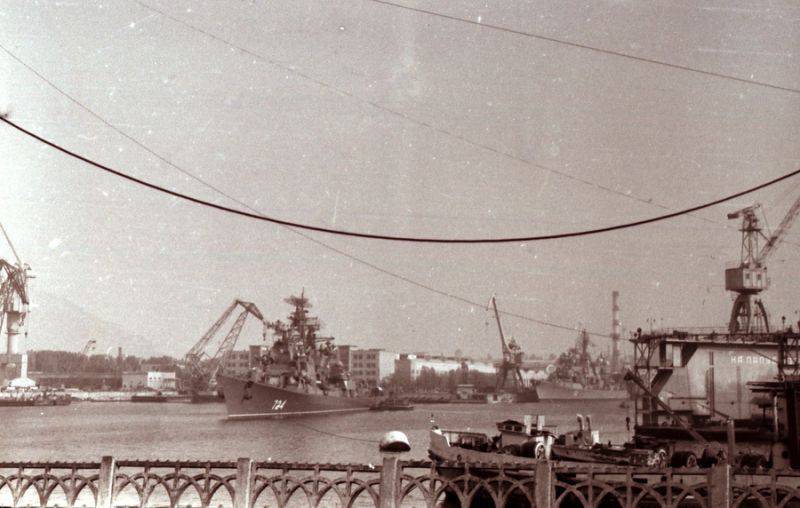 Totalitarian past 1987 year. BOD "Explanatory" for the Indian Navy leaves the waters of the plant. In the background BOD project 1134B 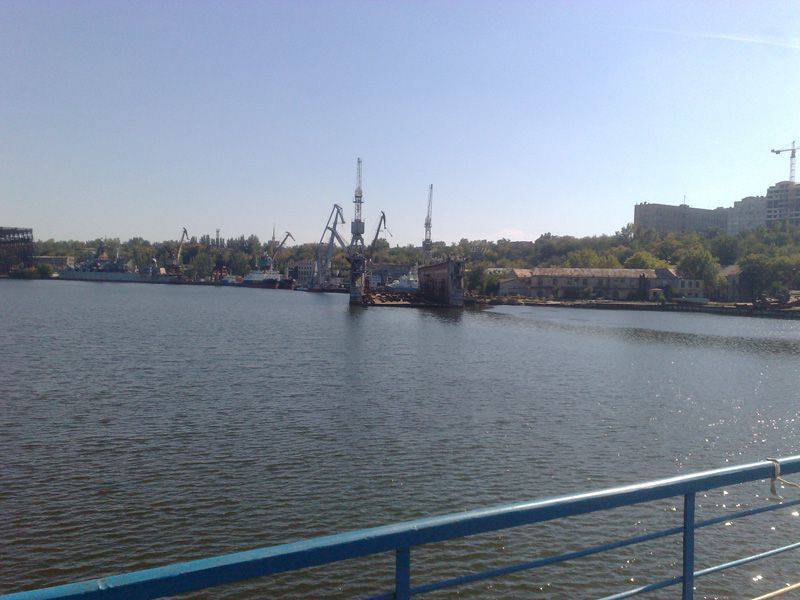 ... The Ingul bridge was still lit. The next day. From the third time. Reluctantly, he raised his mighty 76-meter steel “hand”. Now Ukrainian ships are in the waters. They are also not the brainchild of Square Ukraine. This is the Soviet legacy, which, by the way, is struggling here to the best of the "loving" forces. Will there be enough funds and capacities, and most importantly, knowledge and skills, in order to bring these middle-aged ships to an acceptable state? Will they share the sad loneliness of the grimly rusting "Ukraine"?

Nikolaev had already experienced years of decline and a period of shipbuilding pause. This happened after a defeat in the Crimean War, when, according to one of the points of the Paris Peace Treaty, Russia lost the right to have naval forces in the Black Sea basin. The shipyards were in desolation, the plants stopped. But a quarter of a century later, the Russian fleet was revived, replacing wood for armor plates, and sails for cars and boilers.

Will the shipbuilding past of Nikolayev sink into oblivion, or will the fleet return and breathe life into the cold steel stocks? Will onlookers walk past shabby ruins, exclaiming: “Here in 56 life was in full swing!” - or will ships leave the factories again?

Ctrl Enter
Noticed oshЫbku Highlight text and press. Ctrl + Enter
We are
The bloody finale of the Budapest groupThe beginning of the era of steam and armor
Military Reviewin Yandex News
Military Reviewin Google News
65 comments
Information
Dear reader, to leave comments on the publication, you must to register.