News from the front

22 September 2015
5
In the State Archive of the Lipetsk region, I got a completely different case. But I found several military newspapers - and I realized that I could not pass by ... 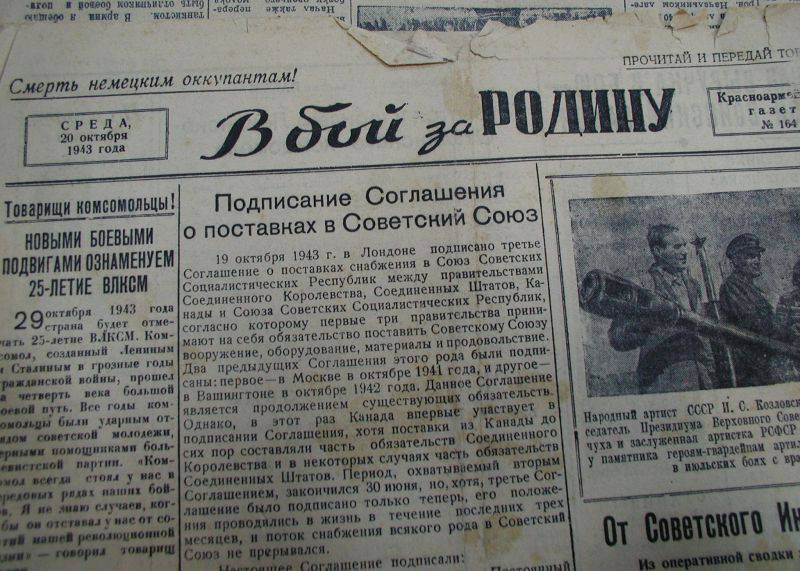 Master of his craft

“Guards senior sergeant Fyodor Petrishchev was lying in wait. Well disguised, he patiently watched the location of the Nazis. I waited for the target to appear.
It was getting dark. The slanting ray of the sun slid into the telescopic sight, and the objects lost their sharpness. An experienced sniper knows what to do in such cases. Petrishchev broke the pine branch and set it over the scope so that the sun’s rays could no longer reach the lens. In the morning Petrishchev destroyed two Fritz.

The day started well. But he knew that in the evening the Germans were going out for dinner, and he waited patiently for darkness. Soon the experienced eye of the sniper noticed how a German jumped out of the forest into the clearing. Having run a few meters, he lay down, then got up, ran a little more and lay down again. The fascist had a thermos behind him. The enemy wanted to reach the kitchen.
“Now I will feed you, you bastard!” Thought the sergeant. When the fascist jumped up again, the sniper aimed and sent a bullet. The German mobster fell backwards and did not get up anymore.
High skill is a feature of Sergeant Petrishchev. The other day was with him another case.

From the German trench, Fritz leaned out in a dark green uniform. But this German was suspiciously awkward: the uniform was very bulging.
- Dressed scarecrow and want to hold me, - said the sniper himself.
The scarecrow waved its arms and began to sway. Petrishchev, having understood the plan of the enemy, lay quietly. But the Germans calmed down, abandoned their venture and got out of the trenches. This sergeant and waited. Quickly sent three bullets and shot three bandits.
But such accuracy was not immediately given to Petrishchev. In peacetime, he raised two sons. During the occupation they were shot by the Nazis. “For one son — a thousand German reptiles!” Decided the sergeant. On his account, while the Germans 375.
The newspaper of the Kalininsky front "Soviet Guardsman", April 20 1944 of the year.

Sergey Ushakov
He came to the front to exterminate the hated fascists, having experience of fighting the Finnish military. Ushakov was the gunner of the gun. He then went through a complex military science - he brought up an endurance in himself, learned to be sharp-sighted. And recently became the commander of the gun.
... They beat the guns. The thunder of guns merged with the rattle of machine guns, dry explosions of mines. The earth shook from heavy bombing.
Keeping cool, but at the same time heated by the battle, Ushakov commanded:
- The fire!
And the shells flew into the target, suppressing the German firing points.

The Germans brought into battle Tanks. They crawled to our firing positions. Ushakov rolled his gun to an open position and began to shoot German armored monsters with direct fire. In this battle, he knocked out 9 tanks.
Sergey Ushakov received a letter from distant Lipetsk, in which his relatives congratulate the hero with a high award - receiving the Order of the “Red Star”.
The daily front-line newspaper "Red Army", October 4 1942.

The victorious turn of the brave Varaksin
“Using the folds of the terrain, Senior Sergeant Varaksin crawled close to the enemy bunker and began to listen. Drunken Nazis amused themselves playing cards and bawling. “Now I will shut up my throat!” Said Varaksin and threw three anti-tank grenades one by one into the embrasure of the bunker. The air was shaken by the explosions: the Nazis 17 were torn to shreds.

The brave act of the sergeant caused confusion in the camp of the enemy. But, having come to their senses, the Nazis opened fire. From the next bunker stuck machine gun. Zatyavkala gun. Machine gunners ran out of the trench.

A shootout ensued between a group of Nazis and Varaksin. The fighter felt that a bullet pierced his leg. But it was not time to dress the wound, and he continued to shoot back. A minute later, he was still wounded in the chest and side. The shirt was wet with blood. Directly in front of him, Varaksin saw dark helmets - the Nazis were going to stab him or take him alive. Varaksin gave a short queue. Two fell, one fell to his knees, holding his stomach. At this time, the enemy bullet hit the arm, interrupted the joint.
- Do not take you, you bastards, live me! - the fighter shouted, threw up the machine gun and, holding it with one hand, gave a long line.
This winning line merged with others - the comrades came to the rescue. And Varaksin heard the voice of the political leader over himself:
- Well kept! Now we will finish the reptiles! Creep back.
For this feat, Sergeant Varaksin was awarded the medal "For Courage".
Daily newspaper "In the battle for the Motherland!", 19 March 1944 of the year.

Tank Destroyer
“The tank, commanded by senior lieutenant A. Roslyakov, had broken tracks. The car stopped. At this time, the Germans launched a counterattack. Seven enemy tanks appeared, followed by infantry.
“We must stand firmly,” Roslyakov calmly told the crew. 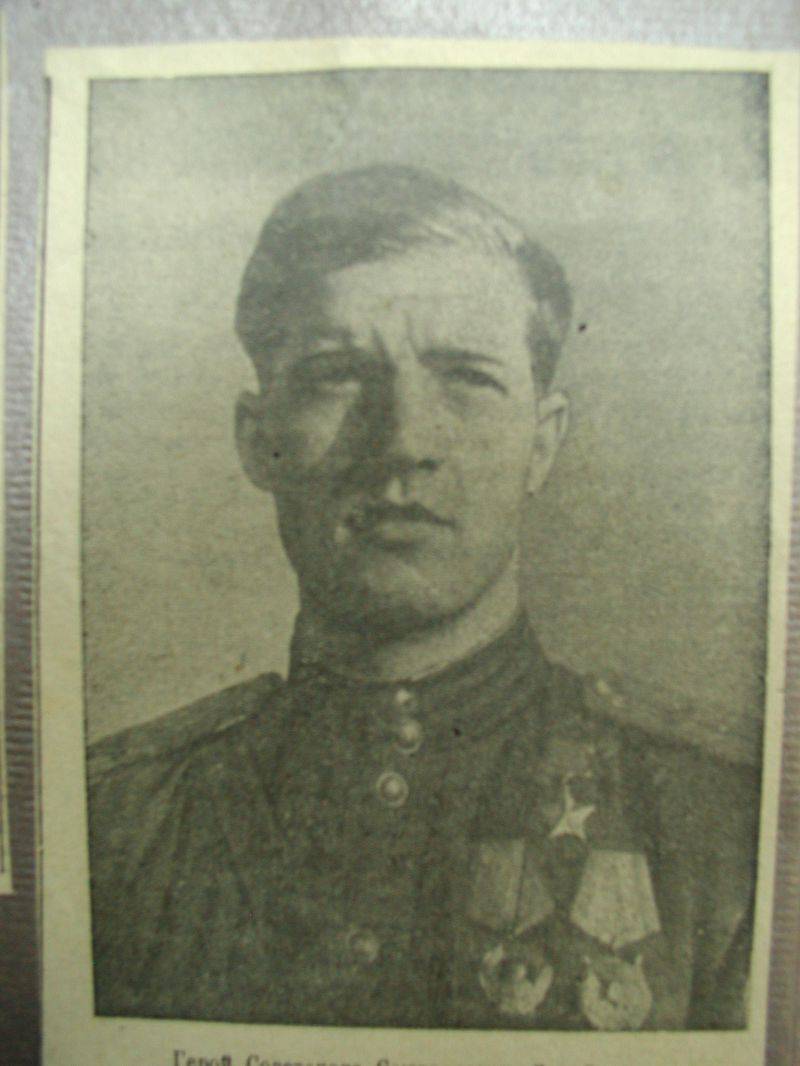 The driver and radio operator removed the frontal machine gun and occupied the perimeter defense. Roslyakov and loader sat down at the gun. An unequal battle ensued. A few minutes later, five enemy tanks flashed from the well-aimed shots of officer Roslyakov, and then two more. Fascist counterattack failed.
Senior Lieutenant Roslyakov was awarded the Order of the Red Star.
War sheet of the Voronezh Front, the date is unknown.

And one in the field warrior
“- Look, how many of them! To the right of the pine two more ... twenty-nine! - keeping calm, Peter Vinogradov was counting the enemy forces.
Deputy political instructor Zhinabayev replied:
- Nothing! I’m putting them on the first number!
The fascists were gathering strength, preparing to rush to the attack on two guardsmen - Vinogradov and Zhinabaev.
There was an unequal fight.
Sustain! Do not miss the enemy! So decided two warriors associated long-standing friendship.

Here the Germans rushed to the attack. Zhinabayev and Vinogradov were waiting for this. They immediately opened fire with machine guns and destroyed several fascists. Fritz understood who they were dealing with. Spread out, lay down, frantically stuck with machine guns. In contempt of fear, the guards returned fire, preventing the fascists from rising from the ground.
Zhinabayev was badly wounded in a fight. Left alone, Vinogradov began to shoot back with even greater rage. He was eager to avenge his comrade. But here the enemy explosive bullet crashed into his machine gun, butt flew into pieces.
- Well, you bastards, hold on! - Vinogradov threw his damaged machine, took weapon He opened fire with a wounded comrade and with a new force.
The bullet burned his leg. Blood soaked pants. But the fighter continued to fire.

The Germans rushed forward. They were pressing and were now close, forty meters away. But no, they can not beat the guards! Vinogradov began to throw grenades at the oppressive Germans. So a fighter alone restrained the onslaught of the enemy. And together with Zhinabaev they exterminated the Germans 18.
Fighting, Vinogradov hoped for help. And she was rendered. Junior Lieutenant Berezovsky with a group of fighters arrived at a decisive moment. The Nazis were forced to retreat. "
The newspaper "Soviet Guardsman", 1943 year. 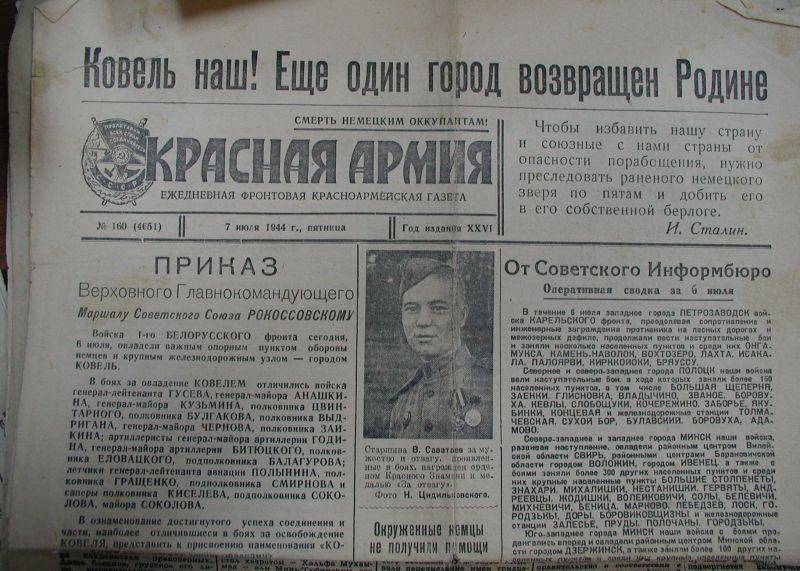 Ctrl Enter
Noticed oshЫbku Highlight text and press. Ctrl + Enter
We are
Okhlopkov Fedor Matveyevich - sniper of the Great Patriotic WarFather told
5 comments
Information
Dear reader, to leave comments on the publication, you must to register.