The Russians are to blame for the unplanned increase in the defense budget of the United States.

18 September 2015
25
Came news from the USA: it turns out, the Pentagon was thinking about increasing the defense budget. Presumably, unscheduled expenses will soon be approved. Where did the ten-year military spending strategy from Obama's outstanding peacemaker go? Maybe someone threatens to attack the United States? Who is guilty? The American military has one answer to this question: the Russians and their Putin. 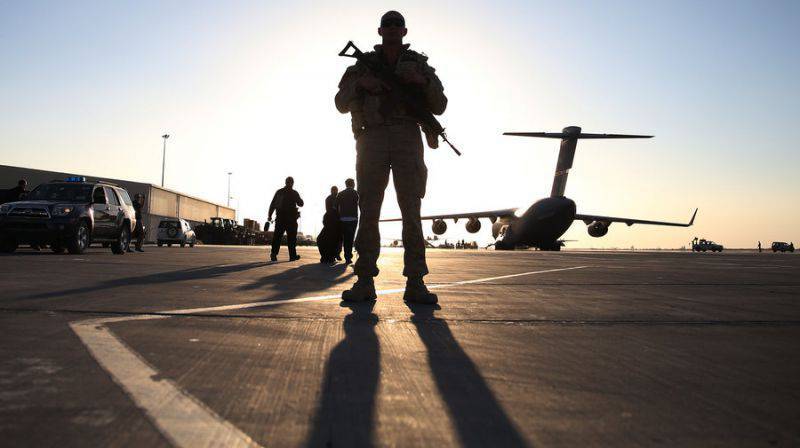 September 15 on the site of the influential edition Bloomberg Business An article by Anthony Capaccio appeared under the loud headline: “Russia's stubbornness affects the Pentagon’s budget plans for the 2017 year.”

In the Pentagon there is such a senior auditor named Michael McCord (MichMichael McCordael McCord). According to him, Russia is assertive in Europe and the Middle East. It was this “assertiveness” that caused the “restructuring” of the US defense budget for the upcoming fiscal year.

True, he did not make any specific statements about Russia. The only thing that is mentioned in the American article is Russia's participation in “cyber war”. It is this participation that became the “key factor” in the new US strategy.

However, proposals for a review of the defense budget “are currently only being studied; they have not yet reached Ashton Carter’s secretary of defense for final approval, ”said Mr. McCord.

McCord explained that the military has to think "most of all" about Russia. Investments and defense doctrine should take into account the Moscow factor.

According to the publication, the actions of Russia under President Putin led to a revival of the Cold War and tensions in international relations. Putin, the newspaper points out, “annexed Crimea” in 2014 and “continues to support the rebels” in Ukraine. In addition, Russia has a nuclear arsenal. It was not for nothing that the General of the Marine Corps, Joseph Dunford, in August 2015, called Russia the most dangerous national security threat for America. Since then, Russia has expanded military aid to the “regime of President Bashar al-Assad” in Syria, the newspaper reminds.

As Mr. McCord said in an interview, the Pentagon’s plans to increase the budget for the 2017 fiscal year may lead to a redirection of funds spent on “fighting with Russia” and reducing the costs of “missions in other parts of the world.”

The budget for the 2017 year is scheduled to be approved in February of the 2016 year.

According to McCord, the funding change “probably will not affect” the Obama administration’s promised plans to “rebalance” in the Asia-Pacific region.

At the same time, the restructuring of the budget is the “biggest” news in terms of the adoption of a certain “long-term program” in relation to Russia, the official said.

Nevertheless, he noted that “much remains to be done,” since the budget “is still under development”.

The publication reminds that the Pentagon’s request to Congress to approve additional budget funding in 2015 billion dollars in 4,8 was the earliest sign of the readiness of the military to “respond to Russia”. This request was approved by four relevant committees on defense in Congress, and the Pentagon launched its program with 18 August

In response to what the United States recognized as “Russian provocations,” the Pentagon announced plans to send about 250 tanks, combat vehicles "Bradley" and howitzers in one and a half dozen European countries.

In addition, the Pentagon is currently also exploring a possible “domestic American alternative” to the Russian-made RD-180 rocket engines used to launch US military satellites.

“McCord made a special reservation,” writes the analyst, “that all applications will be taken into account, although he additionally mentioned the costs of cyber security, which he also linked to the“ Russian threat in cyberspace. ” But this item of expenses is his, McCord, personal misfortune. After hacking into the US Federal Government Personnel Management (ORM) database, when records of federal officials were stolen, in particular, about the extent of their access to classified information right from 1982 to today (more than 21,5 million people), the Pentagon’s senior auditor Put the responsibility for this incident on the data protection companies. And so he was forced to hire new contractors and, under the Reprogramming Action program, he requested 135 millions of dollars to "provide insurance services to the victims of the cyber attack."

This is where the Russian threat comes from: for McCord, the reference to “Russian danger in cyberspace,” the author points out, is a personal financial war.

However, we note, the Pentagon asks not millions, but billions - and this is with a planned reduction in the military budget.

Krutikov writes that the US army asks for the “meet urgent needs” program for the entire 162 million dollars as a response to “Russian activity”. Moreover, this amount is not a new appropriation; Some of this money will be redirected from other directions (as Bloomberg pointed out). The analyst suggests that Americans can reduce Colombian military aid in the fight against drug mafia (although “cocaine aggression” is recognized as a “direct and obvious threat” to national security) and curtail military aid to Israel, now there is a reason: Russians are coming.

And here is another answer to the “Russian aggression”. "Indicative of история with almost 10 millions of dollars that will be urgently spent on the installation of 30-millimeter cannons on the Stryker armored vehicles, the analyst writes. - To understand: these same “Straykers” are coming into service of the so-called light brigades, but the only major division of the American ground forces, fully equipped with these armored personnel carriers, is the 2-I cavalry brigade stationed in Germany. The one that formed the basis of the "dragoon raid" in Eastern Europe this spring to demonstrate US military support to the Balts and Poles, who were then expecting Russian aggression from day to day, but did not wait. "

The analyst recalls that before the Straykers, the 2 Cavalry Brigade was staffed with “lightly armored” Humvees (those that burned like candles in Iraq, and later they were written off and transferred to Ukraine). It is believed that the Strikers are better from the point of view of booking, however, this kind of armored vehicles are armed with 12,7 mm caliber machine guns, and even 7,62, and on the battlefield it can be used "exclusively as an armored truck for bringing reinforcements." “To enter the battles like those that go to Novorossia,” the author notes, “he cannot. He will simply be swept away. ”

Therefore, the qualitative spending of money by the Pentagon is a big question. “There is not even a trace of lobbying actions of any branches of the military-industrial complex,” Yevgeny Krutikov points out. “It’s just that the cumbersome American military thinking is arranged, which is used to get scared at first, to panic and only after a long time to find the necessary form of response.”

The discussion of the theses about the “Russian threat” actually touched not only cybersecurity and the new costs for the “Strikers”, we add from ourselves. American Commander aviation in Europe, General Frank Gorenk, and previously preoccupied with the proximity of Russians in the sky (this is he claimed in June, 2015 about increasing airspace patrols, especially over the Baltic countries, and checking flights of Russian aircraft with transponders turned off), now made a loud statement about the strength of Russia and the “weakening” of the West.

A high-ranking American commander explained quite concretely what he saw as a Russian threat to the West. September 14 this general сообщилthat "the advantage that we had in the air - I can openly say - is waning."

The general meant not only Russian production of more advanced fighters, but also Moscow’s achievements in the field of air defense: after all, the C-300 and C-400 are considered among the best in the world. They are concentrated in Kaliningrad and the Crimean peninsula. Gorenk does not hide the fact that he is primarily concerned with the military forces of Kaliningrad, since about a third of the territory of Poland is within the reach of Russian anti-aircraft missiles. The same applies to most of the Baltic States. It turns out that in the event of a conflict, a no-fly zone is created. But even Moscow is developing the fifth-generation stealth aircraft - the PAK FA ... In general, the general has a lot to worry about.

All these high ranks, we will add in conclusion, talk about the threats, forgetting that Russia is not at all the attacking side and that the coup in Ukraine and the Maidan were provoked by external forces. The United States loves to make coups in foreign countries and can not stand protests on the streets of their own cities. The same is typical of "democratic" Germans or French: in Paris, the police are very fond of dispersing rallies, and they don’t stand on ceremony with them.

The arms race, flights, exercises near the borders, concerns of NATO and the Pentagon, the cold war, “concern” and the talk of an unscheduled increase in the “defense” budget are a direct consequence of American foreign policy. There is no Russian trace here. Had clever diplomats in the USA, they would have played a subtle game in Ukraine: they would wait until the end of the seat on the throne of Yanukovich and sit quietly and peacefully for the kingdom one hundred percent who would turn the Crimea into a military base for Washington in time. Ukraine would be taken to NATO, while Russia would remain a raw materials appendage of the West. As in the Middle East, the Americans did not take into account the Ukrainian internal historical peculiarities - however, they and their “Kyrgyzstan” are not able to take this into account. As a result of the “democratization” in the Middle East, the “Islamic state” was established, and Ukraine is turning into Somalia. For the full picture is missing only sea pirates.

Observed and commented on Oleg Chuvakin
- especially for topwar.ru
Ctrl Enter
Noticed oshЫbku Highlight text and press. Ctrl + Enter
We are
Results of the week. "Of course, he is guilty, but he ... is not guilty ..."China and the United States - a military confrontation?
25 comments
Information
Dear reader, to leave comments on the publication, you must to register.