Poroshenko reiterated that the West should supply Ukraine with weapons

14 September 2015
49
The President of Ukraine has once again declared that Ukraine needs supplies weapons West. At the same time Poroshenko notes that the weapon will be "purely defensive", since "an offensive Ukraine can produce itself". Ukroprezidenta quotes American newspaper The Washington Post (transfer RIA News):
We are not talking about deadly weapons. Ukraine is an industrialized country that can manufacture its own weapons. We are talking about defensive armament, which will help us only for protection. Now we are trying to create an effective defense system. This is what we are discussing with the Americans.

Poroshenko once again declared the overwhelming desire to cooperate with the countries of the North Atlantic Alliance:
It is important for us to support the Transatlantic Union. It is also important that our country receive support, and not only in words.
.

Poroshenko commented on the fact that the West has not yet begun to supply arms to Ukraine. According to Poroshenko, in the army of Ukraine "corruption still takes place", and also it (the army) is "infiltrated by Russian agents."

Poroshenko:
They (the authorities of Western countries - comment “IN”) said that, firstly, Ukraine has no army at all, secondly, everything that we give you will be from Russia, and thirdly - corruption is rampant in the army.

After that, in an interview with Western media Poroshenko expressed the view that the Ukrainian army "is gradually overcoming problems." Does this mean that we managed to cope with corruption in the Armed Forces of Ukraine and the NSU, and could we identify the “infiltrating Russian agents”? .. 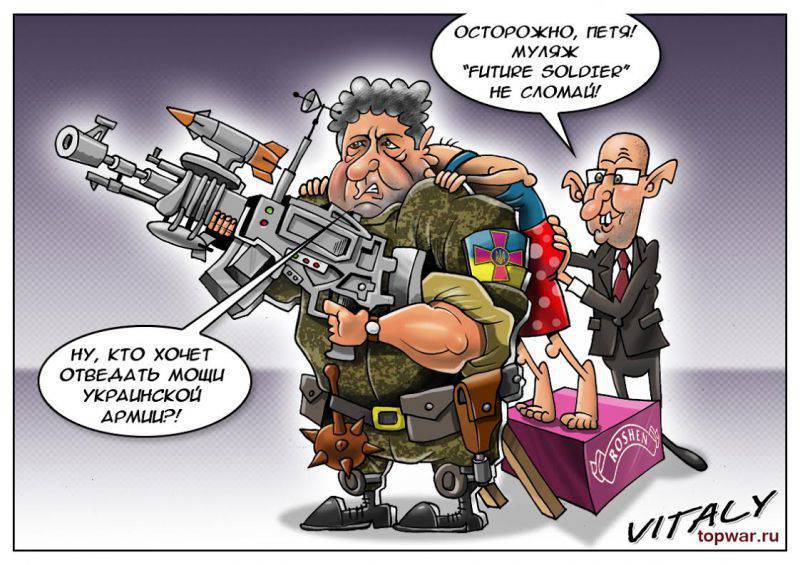 I wonder how, in Poroshenko’s opinion, his statements about the need to fulfill the Minsk agreements before the end of the year are combined with the “weapon” requests made in relation to the West, and what specifically defensive armaments (“Javelins”? ..) Poroshenko understands? ..
Ctrl Enter
Noticed oshЫbku Highlight text and press. Ctrl + Enter
We are
49 comments
Information
Dear reader, to leave comments on the publication, you must to register.