Russian Yak-130: “horror film” that NATO should be afraid of (“The National Interest”, USA) 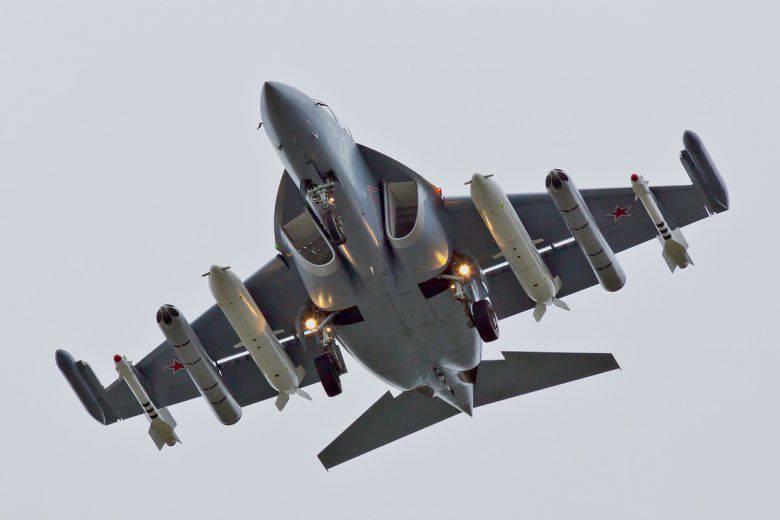 In the world of Russian combat aircraft, the best cars created by Moscow, such as the Su-35 and T-50 of the Sukhoi company, attract the most attention.

But the Yak-130, developed in the Yakovlev Design Bureau, being a less effective two-seater training aircraft, still attracts the gaze of people. Because it is not just a training aircraft. "Mitten," as Western intelligence agents called this twin-engined car, today justifies its reputation as a true multi-role fighter.

When the Air Force wants to maximize its combat potential, a training aircraft, even if equipped with jet engines, can hardly claim to be the number one candidate.

But today's multi-purpose combat-training aircraft represent a very viable and fairly economical alternative to conventional fighters - even those that appeared on the other side of the iron curtain.

As with many other post-Soviet military projects, a lot of time passed before the pilots were able to get into the cockpit of the Yak-130. However, today this aircraft is increasingly used in the most modern flight schools and centers of the Russian Air Force.

In addition, the Kremlin began to deliver this car to Belarus, which is a close military ally of Moscow. Earlier, Russia delivered a lot of these cars to Algeria, which has long been buying Russian-made military aircraft.

The Yak-130 has three suspension points under each wing. This means that its combat load reaches three tons, and it can carry air-to-air, air-to-surface missiles, precision-guided aerial bombs, free-fall bombs, unguided missiles, cannon containers and outboard fuel tanks on board.

At the end of the wing there are two more attachment points for air-to-air missiles and passive interference devices, which knock the enemy’s missile with a thermal homing system off the combat course. But that's not all. Under the fuselage of the Yak-130, you can mount a powerful 23-millimeter cannon.

Recent photos show the next stage of improvement of this aircraft to the level of a real combat vehicle. On the "Yaks" with Russian identification marks visible characteristic "bump" in the bow of the cabin. This may be a laser rangefinder LD-130 with a camera designed to identify targets and increase the accuracy of on-board armament.

Another option in the improvement of the Yak-130 - a bar for refueling in the air, which will increase the combat radius of action when performing offensive tasks.

Fully armed and refueled the Yak-130 weighs 10 300 kilograms. This is just over half the maximum take-off mass of the F-16, which is the main multi-role fighter of the US Air Force and many American allies.

Subsonic Yak-130 belongs to the family of aircraft, which are called combat training. Such machines enable trainees to become familiar with advanced equipment and technologies before they sit at the helm of a real combat fighter.

The United States Air Force, for its part, wants to purchase 350 new training aircraft in return for the hopelessly outdated T-38 Talon. In the air force, this multibillion-dollar program was named TX.

But the Yak-130, unlike the usual training aircraft, is also combat and can make real combat missions.

For the air forces of small countries, such as Belarus, the Yak-130 is a low-budget combat vehicle, in the absence of which they would have to purchase expensive multi-role fighters. Having abandoned the Su-27 fighters due to the high cost and got rid of the Su-24 attack aircraft, Belarus fell into a position where she urgently needed to strengthen her combat fleet aviation.

Small and agile, but capable of inflicting painful blows, the Yak-130 is also very useful in counter-guerrilla and asymmetric wars.

After the Vietnam War, training aircraft found their niche by performing combat missions in counterinsurgency and counterguerrilla operations. Algeria, which has long been leading a military campaign against Islamic extremists, is very interested in this.

As part of the Yak-130 Algerian Air Force, the Sukhoi’s heavier vehicles complement and interact with the upgraded Mi-24 attack helicopters.

Yak-130 was developed in the Yakovlev Design Bureau, which once occupied a leading position in the creation of fighters. In 2008, this design bureau was bought by the Irkut corporation, in connection with which the production of the aircraft was moved to the east of Russia.

Work on the creation of a new training aircraft for the Russian Air Force (then it was the Soviet air force) began in the 1990 year, and by the middle of the 90's Yak-130 began to compete with the MiG-AT OKB Mikoyan. In April, the 1996 of the year the prototype Yak-130 began flight tests, but the Kremlin only in the 2002 year preferred this machine, abandoning the MiG-AT.

In the first decade of the new century, Russia built four prototypes of the Yak-130.

Producers have so far delivered all the machines ordered, and now they are used at the aerodromes of two training aviation centers. Design Bureau. Yakovlev creates a dozen more planes in a simplified version for demonstration flights.

The next customer may be the Russian Navy, intending to use the Yak-130 to train pilots of carrier-based aviation at the recently created coastal training base. The future of the Yak-130 in Russia seems promising, because before the 2020 year, the Ministry of Defense wants to get at least another 150 of such machines.

It is not clear whether this decision will affect the production of the engine.

Irkut is actively courting potential foreign customers. The first was Algeria. In the 2000s, cooperation between the two countries went through a difficult period of great turbulence, as Moscow promised newer aircraft to Algeria than it actually delivered. However, the "Yaks" were very successful acquisition.

The first aircraft from the party in 16 machines arrived in Algeria at the end of 2011. Like the Algerian Su-30MKA fighters, the small Yak-130 are equipped with custom made western cab instruments.

An attempt to sell the Yak-130 of Libya failed when this country was mired in a civil war. And another war - in Syria - nullified the plans for the supply of "Jacob" to Damascus. But since relations between Moscow and the West continue to deteriorate, the Kremlin declares that deliveries of the Yak-130 to Syria may resume.

Belarus bought four Yak-130 at the end of 2012, and shipments began in April, 2015. Irkut hopes that Bangladesh will become the next Mitten buyer. Planned deliveries of 16 aircraft should begin next year.

Bangladesh does not have a shortage of training aircraft, and it is possible that the Yak-130 will be designed for counter-insurgency struggle - or it will perform both training and combat functions.

Most of the countries considering the acquisition of the Yak-130 want to see in it not only a training aircraft, but also a light fighting vehicle designed, among other things, for counterinsurgency. Among such countries are Armenia, Azerbaijan, Kazakhstan, Mongolia, Myanmar, Nicaragua, Uruguay and Vietnam.

The Yak-130 has proven itself to be a combat training vehicle with useful qualities for conducting anti-guerrilla wars such as those that the United States Air Force fought in Afghanistan, Iraq and Syria.

In no case will the USA buy Yak-130 for its TX program. But the Air Force can take advantage of another opportunity.

Italian M-346 Master is the same Yak-130, but under a different name. It is very similar to the Russian combat training machine thanks to the cooperation between the OKB Design Bureau. Yakovlev and the Italian company Aermacchi, which they carried out in the early 1990-x.

Aermacchi slightly reduced the Yak-130, put on it a new digital electrodynamic control system and a modern cockpit with displays. By the end of 1990, the Russian and Italian partners had split up, but the resulting M-346 owes a lot to the product of the Yakovlev Bureau.

The Russian company received many millions of dollars for the drawings of the aircraft, which it handed over to Aermacchi. Today, M-346 is participating in the competition and is one of the contenders for filling the niche of training aircraft of the US Air Force.

At best, he has the odds of an outsider, especially now that General Dynamics’s former US partner, General Dynamics, has abandoned the Italian glider. However, M-346, proposed by America under the name T-100, found buyers in Singapore, Poland and Israel.

The most significant moment is probably that Israel decided to give preference to M-346 in order to train the pilots on the F-35 Lightning II. Italy will also train future F-35 Lightning II pilots on M-346. In fact, they have the same requirements that the United States Air Force set out in its program TX.

There is a certain amount of irony in this. It is not excluded that the Russian and American pilots who are destined to fly on fifth-generation T-50 and F-35 aircraft will learn almost on the same machine.

Ctrl Enter
Noticed oshЫbku Highlight text and press. Ctrl + Enter
We are
The military potential of NATO in Europe in the images of Google Earth. Part 3Preliminary evaluation of the prototype of the unobtrusive Chinese fighter Chengdu J-XX [J-20]
68 comments
Information
Dear reader, to leave comments on the publication, you must to register.