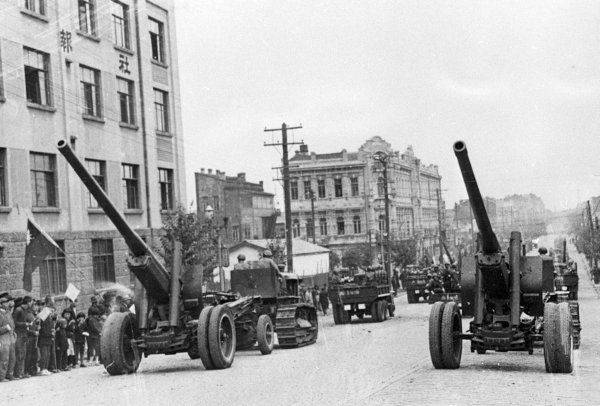 One of the largest military groups in Japan in the summer of 1945 was concentrated in Korea and Manchuria (the state of Manchukuo). It was the once formidable Kwantung Army. Its ally was the Manchurian Imperial Army, which included units of representatives from all five nations of Manchuku, including Russian émigrés.

Russians in the service of the Japanese

In the works of domestic researchers there are references to the fact that certain emigrants and even entire units acted on the side of the Japanese troops in the 1945 war unfolded in Manchuria in August and suffered losses1. Working for a long time with the declassified documents of the state security bodies, we did not find confirmation of the facts of voluntary participation of Russian emigrants in the battles against the Red Army on the side of the Japanese, and even vice versa - we found numerous examples of assistance to immigrants to Soviet troops.

The first Russian military unit, officially part of the army of Manchukuo, but supervised by the Japanese military mission (JVM), was created in the spring of 1938. The unit was called the Asano squad named after its commander, Major (later Colonel) Asano Makoto. The detachment size was about 250 people. Subsequently, the number of Russian military units (RVO) increased to three (Sungari cavalry detachment, Handaohetsi infantry detachment, Hailar Cossack detachment) of up to 800 people. Until the end of 1943, the Russian units were prepared as reconnaissance and sabotage, in case of war with the USSR. In addition to the RVO, there were Russian detachments of the mountain forest police of Manchukuo, intelligence schools, where the Russians were trained along with the Chinese, Koreans and Mongols, the Cossack volunteer militia units.

The Japanese command did not trust its allies. And was it possible to trust them? The emigrant administration assured the Japanese leadership of the active participation of the Russians in the construction of the "common house" in Manzhou-yu and the full support of the Holy War in East Asia2. In fact, most emigrants were looking forward to the arrival of the Red Army. Quite a few immigrants worked for Soviet intelligence.

In July, 1945, the Japanese authorities announced the dissolution of the RVO and mountain-forest police. Most weapons taken out, but two-thirds of the rank and file were not released to their homes, forming labor brigades working on hay and bark. Russian cadets of intelligence schools at st. Imianpo, Shitouhetszy, in Hailar (50-60 people) were sent to their places of residence before special orders.

The Soviet offensive, which began on the night of 9 in August of 1945, turned out to be sudden for the Japanese command. More than ten Russian reconnaissance groups that were sent to Soviet territory during July either did not return, or did not give information about the impending attackNNXX. Recovering from the first shock, the Japanese organized a fierce defense of the fortified areas along the Soviet-Manchurian border.

9 August was announced the mobilization of the armed forces of Manchukuo, as well as Russian units. However, both on the western and eastern lines of the North-Manchurian Railway (MILW), emigrants who were mobilized, hid, ran into the forests. Several anti-Japanese partisan detachments were created, in which the Chinese along with the Russians took part. One of the largest partisan units operated in areas bordering with the Soviet Primorye with a center in the village. Colombo. The compound was headed by N.I. Rosalon-Soshalsky, former commander of the Erdaohetsiysky detachment of the mountain forest police. The guerrillas fought in the rear of the Japanese army, and after its defeat they destroyed groups of the Japanese military and handed over to the Soviet military authorities more than 700 Japanese prisoners4.

Cadets sabotage schools at the station. Imianpo and Shitouhetszy, not wanting to participate in hostilities, fled from the units, and killed their comrade, who was considered a Japanese informant5.

The officers of the Sungari detachment headed by Colonel Ya.Ya. Smirnov, who had no more than a squadron at his disposal (another squadron was haymaking in the area of ​​Anta station), refused the proposal of Major Izima, the head of the local nuclear weapons division, to create several sabotage squadrons and transfer them to the eastern line of the Middle East Railway. The garrison of the Sungari detachment itself was distant from the theater of military operations, and there were no large Japanese units in the neighborhood. This enabled Smirnov, who collaborated with Soviet intelligence with 1944, 13 in August to disband most of the fighters home. The rest took under the protection of a strategically important bridge over the Songhua, the second largest after Harbin XXNX.

Quite a few Russian Asanovites participated in the Harbin self-defense detachments formed on August 15 under the leadership of the Harbin Defense Headquarters (SHO) with the support of the Soviet consulate. Asanovtsy made up the most combat-ready part of the self-defense units. Under the leadership of the Asanovites, the self-defense units, after a minor skirmish with the guards, established control over the Harbin railway bridge over the Sungari for more than a kilometer, which ensured its protection against the detonation of Japanese kamikazes and the uninterrupted transfer of Soviet units to Port Arthur. The reservists of the RVO together with the Harbin youth carried the guard of all the significant objects of the city, preventing robbery and provocations until the Red Army units 20 arrived in the city of 8 in August.

The fighters of Hailar RVO were less fortunate. By the beginning of the fighting under the leadership of the commander of the detachment, Major I.A. Peshkov were 25-28 people. Other Peshkivtsi worked as part of labor brigades outside of Hailar and preferred not to return to the city until the end of the fighting. Peshkov and his men were initially incorporated into units dedicated to the defense of the Hailar Fortified Region, but after the escape of two fighters they were sent to "partisan". However, Peshkov and his subordinates, suspected of treason, were destroyed by met Japanese cavalrymen. Only two fighters managed to survive, one of whom received fourteen wounds9.

In the eastern part of Manchuria, emigrant units were drawn into hostilities. According to the plan of the headquarters of the Kwantung Army, "special battalions" (four in all) were formed at each military mission, combined into a Mudanjiang special detachment. The detachment included emigrant units from reservists and police. On Art. Mudanjiang was the 3rd detachment battalion. In total, five Russian sabotage units were formed. The detachments were led by lieutenant A.A. Ilyinsky, captain S.G. Trofimov, ensign A.V. Pavlov, Lieutenant D.L. Lozhenkov and second lieutenant V.E. Lukesh. The last three were officers of the VBO. Each detachment totaled 30-40 fighters, was armed with rifles, grenades and explosives. Their task was to combat tanks and destruction of communications 10. A detachment of 50 men was assembled from Russian agents of the intelligence department of the Mudanjiang nuclear weapons division under the command of the asanovets cornet A.M. Athlete 11.

10 August at st. The Handaohetszy was reconstructed by a Russian military detachment consisting of two companies, a total of more than a hundred people, headed by Captain N.A. Yadykin. Part of the detachment carried guard duty, but many sought to surrender to the Red Army.

18 August, having received information from the scouts about the entry of the Red Army at st. Handahohetszy, Yadykin built the personnel and said that from the very beginning the command of the RVO decided not to resist the Red Army, in addition, there is information about the surrender of the Japanese. In conclusion, the commander offered to shout "Hurray" for the imminent end of the war. 19 August squad laid down their arms. The officers were detained, and the private and non-commissioned officers were brought in by the Soviet commandant's office to sort the weapons of surrendering Japanese units, defuse mines and small air bombs at the 12 railway station building.

For three days there were stubborn battles for Mudanjiang, where the Japanese 5 Army opposed Soviet troops. Several times the Japanese went on the counteroffensive, throwing the Soviet 26 rifle corps from the city. 16 August Mudanjiang was occupied by the Red Army.

The saboteurs of Ilinsky did not play a significant role at that time. Other Russian detachments that operated on the eastern line of the MWWC also did not take part in the hostilities, surrendering at the first opportunity13.

"We are Russian, we must return to the Russians"

Part of the former Russian detachments and policemen from the ranks of the diversionary units took part in the self-defense units. These detachments in Russian settlements were created everywhere to defend against the attacks of the remnants of the not yet surrendered Japanese military units and Chinese marauders. One of these units was created in the village. Romanovka, which included the remnants of the division of Second Lieutenant Yashkova headed by him.

The situation in the vicinity of Romanovka was serious. In late August, a Soviet detachment was ambushed here, having lost more than 50 people. The Japanese also attacked the settlements of emigrants, considering the Russians traitors. Romanovka's self-defense participated in the disarmament of small Japanese groups, and Yashkov's excellent knowledge of Japanese played a major role.

At the suggestion of the Soviet command, Yashkov agreed to work as an interpreter in one of the military groups engaged in disarming the Japanese units, and was even included in the list of orders and medals presented for awarding. But instead of the award, SMERSH was arrested in early September 1945 g.14

The same fate was expected by the majority of the Russian military personnel of the Russian Military District, the police detachments and the units of the Nuclear Weapons Division, which later replenished the GULAG contingent. Do not think that many of them did not understand what their future situation might be. In Hailin Valley, lieutenant G.T. Shimko addressed his fighters: "I will not tell you that we will be accepted well or badly, but we are Russian, we must return to the Russians" 15. It was their conscious choice, made even before the armed confrontation between Japan and the USSR, although, perhaps, it was just a choice between life and death.

Ctrl Enter
Noticed oshЫbku Highlight text and press. Ctrl + Enter
We are
Kwantung Army. 70 years of surrenderThe army of Manchukuu: how the Japanese created the second “Manchu empire” and its armed forces
3 comments
Information
Dear reader, to leave comments on the publication, you must to register.