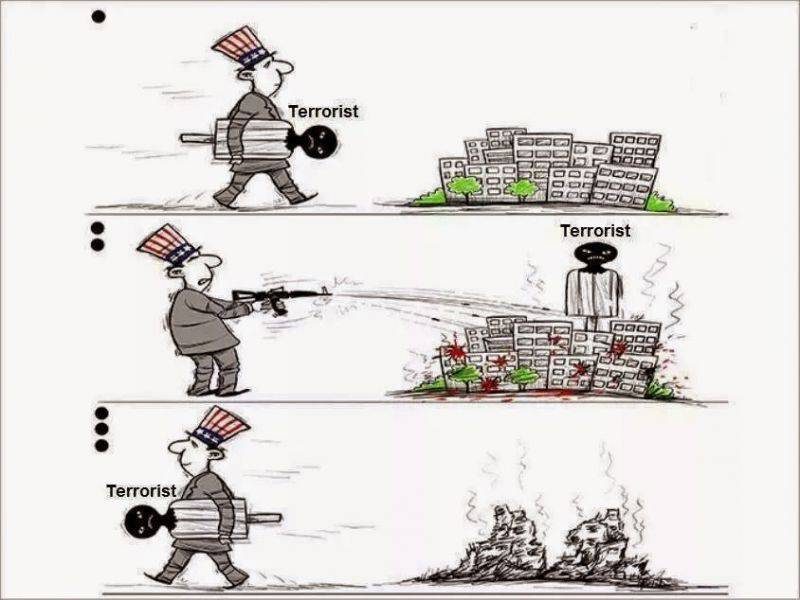 Russian President Vladimir Putin spoke at the Eastern Economic Forum. Along with a number of issues relating to the economic situation in the country and in the world, oil prices, the policies of Ukraine, Europe and the USA and migration issues, he touched on the issue of combating the Islamic State (IG - a structure banned in Russia). The day before, Israeli media reported that Moscow had decided to send combat to Syria Aviation to fight jihadists. This information was circulated by some Russian publications, which, citing "authoritative Kremlin sources", stated that "Russia will not act in the ranks of the American coalition, but on the basis of the Treaty of Friendship and Mutual Assistance between Syria and the Russian Federation." Perhaps this is why the Pentagon spokesman Peter Cook decided to make a statement, who noted that Washington “would welcome Russian accession to the coalition in the fight against ISIS.” Later, the press secretary of the President of Russia Dmitry Peskov disavowed this information, although there was no clarity in the situation.

And that's why. In late June, while accepting Syria’s Foreign Minister Walid Muallem in Moscow, Putin made a sensational statement: “We believe that in order to effectively combat terrorism and extreme manifestations of radicalism, it is necessary to combine the efforts of all countries in the region. All our contacts with the countries of the region, and we have very good relations with all countries without exception, suggest that with such an organization as the so-called "Islamic State", everyone is ready to contribute to the fight against this evil. This also applies to Turkey, this concerns Jordan, this concerns Saudi Arabia. And in this regard, of course, we urge all our friends, including in Syria, to do everything to establish a constructive dialogue with all countries interested in the fight against terrorism. It is clear that with neighbors always or often, in any case, there are some misunderstandings, frictions, problems of a current nature, but in the name of fighting the common evil, of course, you need to combine efforts. ” At the same time, Moscow will continue to support the "leadership and people of Syria who oppose the aggression of terrorists."

In other words, the Kremlin proposed to form a coalition to combat the IG as part of Russia - Syria - Turkey - Jordan - Saudi Arabia, but no one understood whether it was a question of creating a new format along with the already existing “broad coalition” of almost 60 states led by the United States, or the “sub-coalition within a coalition,” since Saudi Arabia, Turkey, and Jordan are already members of the “broad coalition” put together by the Americans. It seems that it was all about the second option. “We are taking certain steps, and we are doing this in public. If you are interested in details, then I can tell you, we really want to create an international coalition to combat terrorism and extremism, the Russian leader said at the Eastern Economic Forum. - To this end, we are consulting with our American partners. I personally spoke on this issue by telephone with the President of the United States. I spoke on this issue with the President of Turkey, with the leadership of Saudi Arabia, with the King of Jordan, with the President of Egypt, with our other partners. ” At the same time, he noted that it is still premature to talk about the possible participation of Moscow in military operations against the "Islamic state".

Nevertheless, the chances for the implementation of this scenario existed. Back in the spring of 2015, US Secretary of State John Kerry acknowledged the need to establish a direct dialogue with Syrian President Bashar Assad on CBS News. According to him, “we [the US] will eventually have to negotiate with Assad,” and “we were always ready to negotiate in the context of the Geneva-1 conference on Syria”. Thus, prospects opened up to re-launch the political process on a Syrian settlement with the simultaneous formation of a “broad antiterrorist front on an agreed international legal basis in order to put a reliable barrier to terrorists in Syria, Iraq and other countries of the region.” But after Turkey decided to join the international coalition to combat IS, and its aircraft began to bomb IS positions in Iraq and Syria, President Recep Erdogan said that, first, Ankara "is fighting terrorism under the auspices of the West" and and, secondly, allegedly “Putin has changed his attitude towards the Assad regime.” The latter was not true. It was not by chance that, at the beginning of August, Russian Foreign Minister Sergei Lavrov discussed with Kerry and his colleagues from the Gulf countries measures to combat the Islamic State without the participation of Turkey. At the same time, according to Putin, "if today it is impossible, as they say, to organize joint work directly with each on the battlefield between all countries interested in the fight against terrorism, then at least some coordination between them should be arranged." But is it possible when, again, according to the Russian president, “there are different approaches to the events in Syria,” and “people are not running from the regime of Bashar al-Assad, they are running from the IS, who seized the territories, including significant territories in Syria, Iraq ".

The situation in the Middle East is changing rapidly. After the signing of the Vienna Agreement with the "six" on the nuclear program, Tehran’s policy on the Syrian direction became noticeably more active. On August 12, Iranian Foreign Minister Javad Zarif submitted to Syrian President Assad a plan for resolving the conflict in Syria. It includes measures such as an immediate ceasefire, the formation of a unified government and the amendment of the country's constitution, as well as the holding of elections in the presence of international observers. Damascus decided to support “constructive political initiative from Iran,” since Tehran, like Moscow, by the way, initiates a dialogue between representatives of the Syrian government and the opposition, although the Iranians clarify that they are ready to cooperate with oppositionists who live in Syria and belong to “internal opposition. “External opposition”, in the opinion of the Iranian leadership, does not enjoy the support of the Syrian people and expresses only the position of the West. But the problem is in the desire of the United States to reckon with the mediation of Iran in conducting peace talks on a Syrian settlement, as this could ruin the international coalition they lead. That is why in the Western media with regard to Tehran, as with Moscow, there is often misinformation about the alleged existence of a “backstage plan” involving Assad’s departure and transfer of powers to the transitional authority, and on this basis, backstage dialogue between Russia and Iran with the United States. Therefore, Russian President Vladimir Putin once again decided to remind that President Assad is legitimate, and the supreme leader of the Islamic Republic of Iran, Grand Ayatollah Ali Khamenei, stated that "we will never go on about the Americans as regards Syria and Iraq."

Add to this the policy of Cairo, focused on the restoration of dialogue with Damascus, which does not preclude in the future the creation of a contact group on Syria with the participation of Egypt, Saudi Arabia and Iran, which can be considered the main intrigue of the situation, since outwardly such proposals completely fit the framework of the projects, previously proposed on this issue by a number of countries, including Russia. In this regard, Putin noted that "the fight against terrorism must go along with the political process in Syria, and the head of this state, Bashar Asad, is ready for certain steps in this direction." In our opinion, the problem is that after the Cold War, American diplomacy practically lost the skills of literacy in building coalition formats. So, in the Middle East during the operation of the Arab Spring, especially in connection with the Syrian crisis, the emergence of IS, the polysubject nature of the political space disappeared from the US, and the coalition players, in particular Turkey, turned out to be in a state of internal and external conflict, since they began to impose a policy of implementing others, not their national interests. The United States and Turkey are bombing the territory of Syria without the consent of Damascus and without UN sanction. Western media cite convincing evidence of jihadists supporting Turkey at a certain stage, and now Ankara is participating in hostilities on three fronts at once: in Iraq against the Kurds and the IG, in Syria - against the IG and with a view to the Syrian Kurds, in the south -Eastern with detachments of the Kurdistan Workers' Party (PKK).

While Washington does not hide the fact that it supports Syrian Kurds, to whom Assad granted de facto autonomy, Erdogan unexpectedly declares that “Western countries do not bring peace and freedom to Iraq and Libya, but seek to seize the oil wealth of these countries”, and hints that "Turkey will continue to fight terrorism even if it remains alone." In turn, a number of European politicians and authoritative American experts declare the failure of US policy in the Middle East, which turned out to be a strategic catastrophe, because in this region "the balance of power that had existed for more than half a century was upset." These are real signs of the collapse of the international coalition to combat the IG, in order to somehow preserve this structure, in the Western media there are “leaks” of information, as if Russia and Iran are joining it. Let's see what happens. In the meantime, jihadists have published a religious decree (fatwa) on social networks, according to which Turkish President Recep Erdogan is called "apostate, shedding the blood of Muslims and sold Christians, Alawite and Jews," and "if he does not repent, inevitable death awaits him."

Ctrl Enter
Noticed oshЫbku Highlight text and press. Ctrl + Enter
We are
Iranian geographyPutin, have you come to sell oil? ("The site of the newspaper" Huanqiu Shibao "", China)
26 comments
Information
Dear reader, to leave comments on the publication, you must to register.