From Russia with love. Syrian BTR-82A 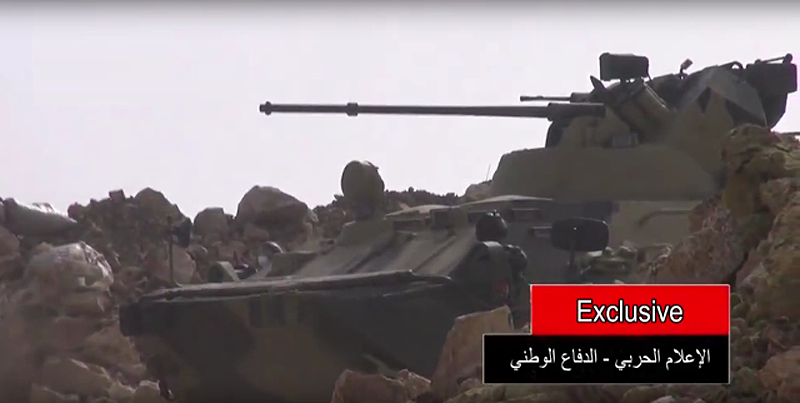 Just a few days later, after the BTR-80 armored personnel carriers were seen among other military equipment loaded for Syria aboard the Russian military ship Nikolai Filchenkov (Alligator-class landing craft), it seems that more modern Russian weapons were delivered there, since the newest armored personnel carriers BTR-82 were seen on the battlefield in a war-torn country.

At least one BTR-82A armored personnel carrier can be seen on the offensive video in Latakia. He took part in the offensive, the purpose of which was to reoccupy the previously lost territory in northeastern Latakia. The offensive was conducted jointly by the National Defense Forces (SSS), the Syrian Arab Army and the Republican Guard; the latter has only recently been deployed on the Syrian coast in such large numbers. Taking with you Tanks T-72, BMP-2 and 152-mm self-propelled howitzers 2S3 Akatsiya, Republican Guard arrived there in mid-June. One would expect that the delivery of the BTR-82 Republican Guard occurred around the same time. The arrival of the Republican Guard seriously increased the firepower of the SSS, which were mostly armed with obsolete weapons from warehouses and who were tasked to defend this region. In fact, during the previous offensive, the AtoNS was forced to use even 100-mm anti-aircraft guns KS-19 as traditional artillery.

As you know, Syria received a limited number of BTR-80 from Russia at the end of 2013 or the beginning of 2014, in accordance with the agreement on the destruction of chemical weapons, although none of the vehicles that were supposed to transport and protect chemical weapons returned to Russia. At least two different variants of the BTR-80 previously seen in Syria; several BTR-80 in an unknown version were seen on board the ship Nikolai Filchenkov. Thus, the BTR-82 armored personnel carriers from the previously classified supplies are already either the third or the fourth version of the BTR-80, received in service with Syria.

BTR-82A in camouflage coloring comes with a tactical number "111". This does not correspond to the identification system used on Syrian military vehicles for a long time. The BTR-80, supplied under a chemical weapons agreement, was all painted khaki without any identifying marking. 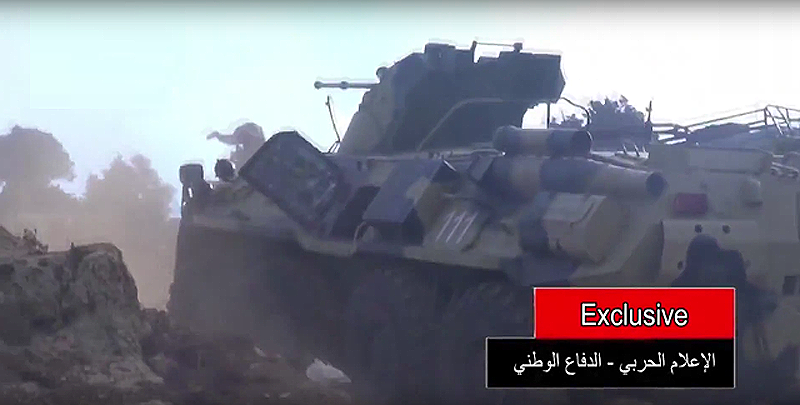 Supplies of military equipment and equipment to Syria are carried out by Russian landing ships fleetwho make regular flights from the Black Sea to the Mediterranean Sea and back. Although Turkey is in opposition to the Assad regime, almost all military equipment delivered to this regime passed through the largest Turkish city. Only on August 20, the landing ship Nikolai Filchenkov passed through Istanbul with cargo and armored vehicles on his deck. The presence of cars on deck this time was noticeable, since the equipment was previously transported only in a cargo hold and it was not visible when passing the Bosphorus Strait by ship. Most likely, this means that the batch of vehicles sent to Syria under this agreement was so large that it simply did not fit into one cargo hold! 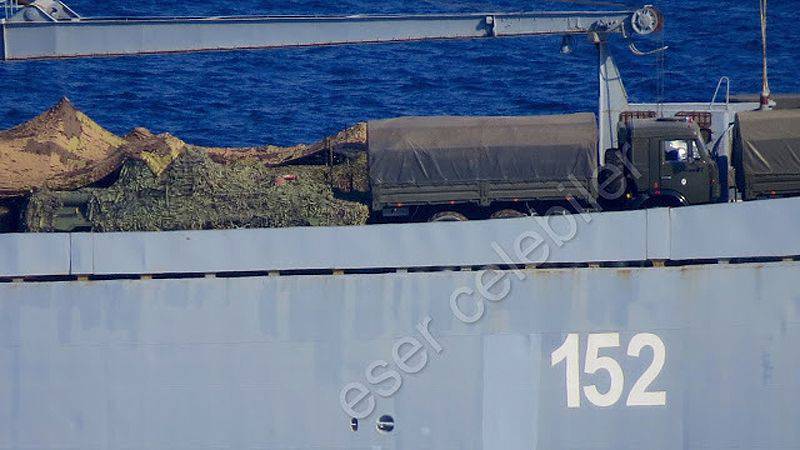 The BTR-82A armored personnel carrier with its long-barreled 30-mm 2A72 automatic cannon is easy to distinguish from the standard BTR-80 armed with a large-caliber 14,5-mm KPVT machine gun. The older model BTR-80А with the same 2A72 gun is more difficult to distinguish from BTR-82А.

The main difference is the presence of the TKN-4GA-02 night-vision device at the top of the BTR-82 turret, which replaced the TPN-3 device with the BTR-80. The second difference is in a different design of the exhaust pipe (pictured below). 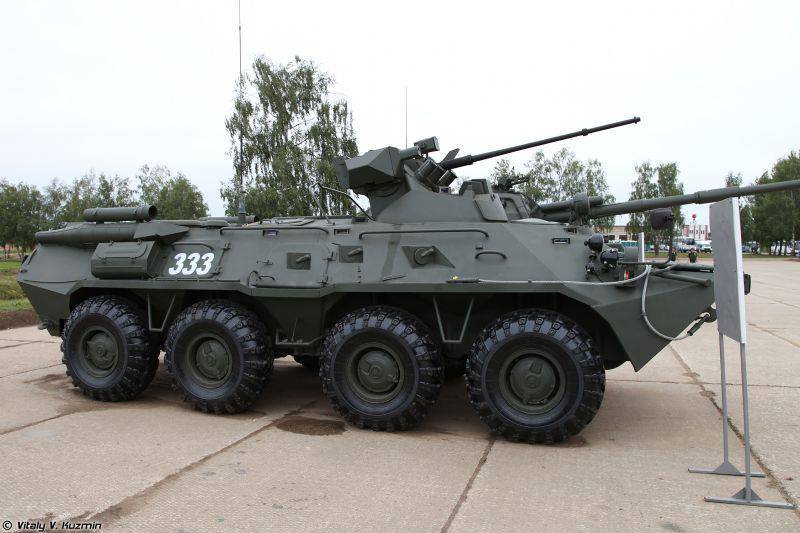 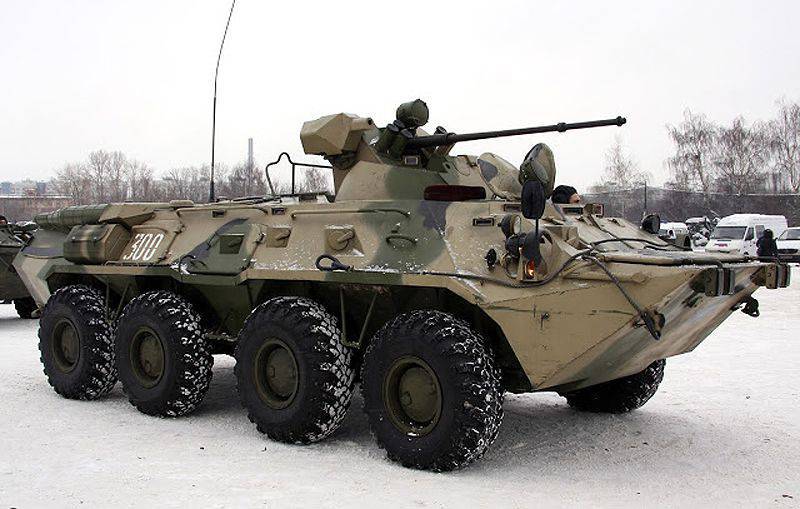 These deliveries, in essence, serve as a reminder of Russia's obligations to support the Assad regime, which means that supplies of other vehicles and weapons systems are probably still ahead. Deliveries of new (on the exterior) T-XNUMHAB tanks with blocks of dynamic protection seem endless, the Syrian Air Force, retaining the ability to suppress rebel groups and delivering desperate retaliation to the recently lost cities, as well as the supply of weapons described in previous articles in this series ... For all this needs to be paid close attention, since the Russian commitments to maintain the al-Assad regime continue to be greatly underestimated and may be much more serious than expected.

Ctrl Enter
Noticed oshЫbku Highlight text and press. Ctrl + Enter
We are
In the direction of the front: Syrian infantry fighting vehicles (part 2 final)Teachings "Cheeky Alligator - 2012"
42 comments
Information
Dear reader, to leave comments on the publication, you must to register.