6 September 2015
2
September September 3 Soviet newspapers published an appeal by I.V. Stalin to the people. The document said the end of the war with Japan1945. On the same day, the Decree of the Presidium of the Supreme Soviet of the USSR was issued, which on September 1 was declared the day of a nationwide celebration - the Victory Day over Japan and a non-working day3. And on September 2, the capitulation act of Japan was signed. The ceremony took place aboard the American battleship Missouri. Soviet representative, Lieutenant-General K.N. Derevianko, put his signature fourth, after the American, Chinese and English representatives.

Marshal K.A. Meretskov recalled: "The Harbinzinzia Square, decorated with flags, was overcrowded. There were about 20 thousand Russian residents of the city, as well as many Manchus and Chinese. Colonel-General T. Shtykov opened the rally and gave the floor to the representative of the Soviet troops, Major General K. Y. Ostroglazov, who spoke about the collapse of the Kwantung Army and the great role that the Soviet Union played in World War II ... Lawyer Berdyakov spoke from the city’s intelligentsia, Lyudmila Zakharova-Penzhukova from the intelligentsia, Archbishop Nest from the clergy Then, speeches were made by representatives of academics, students, artists, merchants. In conclusion, a big concert was held by local artists and our Red Army Song and Dance Ensemble 1 of the Far Eastern Front "4.

September 7 in Soviet newspapers published the latest operational report for September 5 from the Soviet Information Bureau. The Soviet leadership generously rewarded the participants of the war. Over 2 100 000 people were awarded orders and medals, including 308 000 - fighting. 93 soldiers and officers were awarded the title Hero of the Soviet Union, more than 300 formations, units and ships were awarded orders, 25 received the title of the Guard. The honorary names of the Khingan, Amur, Ussuri, Harbin, Mukden, Port Arthur, Sakhalin, Kuril and other names were assigned to more than 220 compounds and parts of 5.

By the decree of the Presidium of the Supreme Soviet of the USSR from 30 of September 1945 was established the medal "For the victory over Japan." High awards were awarded to the High Command, including Marshal of the Soviet Union K.A. Meretskov, awarded the Order "Victory". 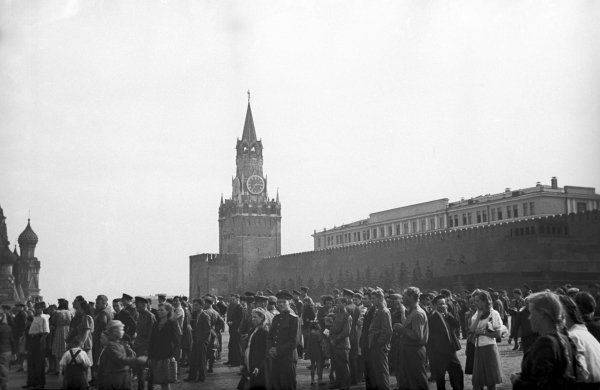 Soviet-Japanese War
Parade ... will be held only in Harbin
Since antiquity, the symbol of victory was the parade of winners. For unknown reasons, on the territory of the USSR they did not hold parades in honor of the victory over Japan. The country's leadership decided to confine itself to one parade in China. General A.P. Beloborodov recalled: "Vasilevsky told me that, by order of the Supreme Commander IV Stalin, a parade in honor of Victory Day over Japan would be held only in Harbin. Comrade Stalin ordered him to take the parade ... As Marshal of the Soviet Union AM Vasilevsky was I was urgently called to Moscow, they assigned me to take the parade of the troops, and the command of the parade was to lieutenant-general of artillery KP Kazakov "6.

The Victory Parade took place in Harbin on Sunday, September 16 1945. His description was presented in Soviet Far Eastern newspapers7. On the pages of newspapers printed photos of the parade. September 20 in the "Pacific Star" was placed photo N. Ozersky, 7 November 1945, in the "Buryat-Mongol truth" was placed photo S. Savenko.

This celebration of the capital of Manchuria did not know

A TASS report by 18 September from the Khabarovsk Pacific Star newspaper said: "Harbin awoke unusually early, excited by the upcoming Soviet military parade in honor of the victory over Japan. Hundreds of thousands of people took to the streets. The main thoroughfares of the city are Chinese and Diagonal streets and the station Dressed in the best dress, people stood on a trellis along sidewalks, each holding two flags — Soviet and Chinese. A sea of ​​flowers, thousands of slogans in Russian, Chinese and Korean, glorifying greatness and beauty. s soldiers of the Red Army and its commander Generalissimo of the Soviet Union of Stalin IV. Such huge gatherings, such celebrations have never seen and did not know Harbin.

Long before the start of the parade, the station square and adjacent streets were filled with guests. The area is decorated with red panels, slogans, banners, portraits. At 10 hours 30 minutes in the morning, representatives of the military command of the Red Army, the Soviet government, the Republic of China, the clergy and the public of the city occupy the places on the main podium.

In 11 hours, the Hero of the Soviet Union, Colonel-General Beloborodov, arrived twice in the square where the troops of the Harbin garrison lined up for the parade. Having received a report on the readiness of the Harbin garrison for the parade, Colonel-General Beloborodov, accompanied by the parade commander, Lieutenant General Kazakov, toured the troops. “Hurray!” Rattles, then Colonel-General Beloborodov rises to the rostrum and addresses the troops with a speech. The solemn sounds of fanfare announce the beginning of the parade. The first to enter the square are the units commanded by Hero of the Soviet Union, Major General Cherepanov. Solid chased step go shelves. In a monolithic order, warriors move - heroes of the Manchu battles. Following them, columns of fighters pass by the stands, the first to ram the defenses at the border ridge. Their leader is the Hero of the Soviet Union, Major General Batrakov. Thunder applause greeted those present on the square of the famous general and his soldiers.

The parade has been going on for an hour, and the victorious troops are marching through the square in continuous columns. Marines are replaced by signalmen, sappers, mortar men.

Shouting “Hurray!”, Enthusiastic exclamations in honor of the great Stalin are greeted by the assembled entry into the square of the Guard mortars. Small and large "Katyushas" are moving with two ribbons. Thunder of applause does not subside for a minute.

For a moment, the station square was empty. Colored rockets heralded the entrance to the tank parade. At full speed, the T-34 tank flies under the command of the illustrious commander of the tank units of Onishchik. It was his armored vehicles that paved the way through the impenetrable Manchu taiga, overtook Japanese columns and crushed them. These Tanks Onishchik took the city of Mudanjiang. And cut off the retreat to the main Japanese forces. Two columns pass light and heavy tanks past the stands. Crews drive their cars in a clear line. Here tanks sweep named Suvorov, Kutuzov, Minin, Dmitry Donskoy. Here is a car with the slogan: "For our Soviet Motherland!". In her open hatch - Captain Novinsky. During one of the last battles, the Novinsky tank defeated the enemy military echelon and destroyed more than a hundred Japanese soldiers. Then follow the machines of junior lieutenants Pavlovsky and Smirnov. Their crews, when taking one of the enemy strongholds, destroyed seven heavy Japanese guns and shot a lot of enemy infantry.

The parade of the unshakable power of the Soviet military forces is over. Leaving the square, the troops march in the same immaculate ranks across the city. Vokzalny Avenue, Diagonalnaya, Chinatskaya streets are completely covered with fresh flowers.

Verse rumble tank engines, and poured into the square columns of demonstrators.

The demonstration lasted about two hours. "8.

The Soviet-Japanese war put an end to the whole of the Second World War. Military trains with victorious soldiers headed back - to the west.

We are in Yandex Zen
Autograph of General Derevyanko
Diplomats of the People's Commissariat of Defense: on the eve and during the war
2 comments
Information
Dear reader, to leave comments on the publication, you must to register.