3 September 2015
14
Russian Foreign Minister Sergei Lavrov visited Baku and conveyed greetings from Vladimir Putin to Ilham Aliyev. Lavrov called Azerbaijan a "strategic partner" of Russia. At the same time, another statement was made - from a member of the Azerbaijani parliament, political scientist Rasim Musabekov. He noted that Lavrov’s visit was “quite unexpected, since Azerbaijani Foreign Minister Elmar Mammadyarov was recently in Moscow.” The political scientist suggests that the Russian proposals transmitted through Mamedyarov, “most likely, on the Karabakh conflict,” did not cause a positive reaction from the Azerbaijani leadership, hence Lavrov’s trip. In the press, the topic of a “frozen” conflict was immediately awakened. 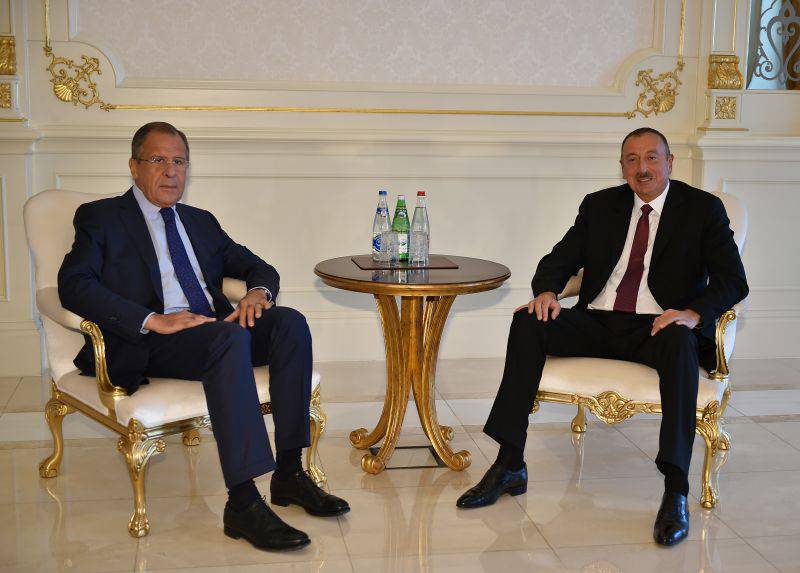 The publication cites the words of the minister: “We are strategic partners both in Transcaucasia and in the Caspian region, and in general we have very close positions on most of the very acute problems of international relations. We are in close contact with my colleague, Foreign Minister Elmar Mamedyarov and discuss our interaction in the UN, in the OSCE, in the Council of Europe and in other international platforms. ”

As reported from Baku TASS, Moscow hopes that the Azerbaijani side will take part in the exhibition “Russia Arms Expo-2015”. This was also announced by Sergey Lavrov at the meeting with Ilham Aliyev.

“We hope that our Azerbaijani friends will take part in the exhibition of military technical products to be held in the Sverdlovsk region in September,” the agency quotes the minister. “Representatives of Azerbaijan received an invitation.”

In addition, the Russian Foreign Minister thanked Azerbaijan for the excellent organization of the visit of three Caspian ships in August. flotilla in Baku.

Comrade Lavrov spoke on a cultural theme. Speaking about the ties between the two states, Lavrov noted that this is "a huge layer of our relations, emphasizing the closeness of our peoples and their craving for each other." “Culture, education - all this brings us very closely together,” the minister said.

The reasons for Lavrov’s visit to Baku in the form of the transmission of greetings from Putin and the speeches about the cultural proximity of Azerbaijan and Russia seemed to some analysts far-fetched.

“We have a very close relationship with Russia. And the political dialogue is constantly carried out. But in this case, this visit is quite unexpected, since the head of the Azerbaijani Foreign Ministry, Elmar Mammadyarov, was recently in Moscow and went through the whole agenda with Lavrov, ”said political scientist Rasim Musabekov to the Caspian Broadcasting Company. His words leads portal Azerros.

“Therefore,” the political scientist said, “it can be assumed that some Russian proposals passed through Mamedyarov, most likely on the Karabakh conflict, did not cause a positive response from the top Azerbaijani leadership, and Lavrov arrives in Baku to personally give the necessary clarify and convince the expediency of their adoption. "

Local publications, the portal notes, agree that in the absence of accurate information, one can only guess at what Lavrov arrived in Baku with. “However, no one in Baku has any doubts that the Karabakh issue will be the main one at Lavrov’s meetings with the leadership of Azerbaijan,” the portal said.

What caused such confidence, in addition to the unclear purpose of Lavrov’s visit to Azerbaijan?

Such confidence, the newspaper writes, appeared on Sunday last week, when the Assistant to the President of Azerbaijan on political issues, Ali Hasanov made a resonant statement.

Speaking about the settlement of the Karabakh conflict, Hasanov said in an interview with the television company ANS that negotiations are continuing mainly within the framework of the Minsk Group format. Hasanov harshly criticized the settlement approach: “There is still hope for this format, including from the Azerbaijani side. But, unfortunately, the toothless activities of the Minsk Group, the UN Security Council's dual approach to this issue, and indifference to UN resolutions are pushing Azerbaijan and Armenia to war. ”

Moreover, the presidential aide believes that if negotiations continue in this way, war will be inevitable.

A week and a half ago we told on "IN" about the forecast of analysts from the "shadow CIA". Experts from Stratfor issued another grim forecast for Russia: they claim that Ukraine is only flowers, berries ahead. The Transcaucasus will soon become a new battlefield of the West and Russia. Among other things, analysts pointed to the "awakened" conflict in Karabakh.

Recall briefly what was discussed.

The authors of the report write that “the conflict of Azerbaijan and Armenia over Nagorno-Karabakh suddenly intensified”. And make a strategic conclusion: "And this is not a coincidence."

If before the Russian military presence in Armenia was sufficient for maintaining peace, now the Europeans “are giving much more hot signs to Azerbaijan”: he has energy resources, Europe is just looking for alternative suppliers. If Europe had reached an agreement with Baku, the latter would have gained leverage, while Russia at the same time would have lost its “economic and political reputation.”

These changes in the mood of the analysts explain the “more aggressive” behavior of Azerbaijanis towards the Armenians. This also explains the lack of an “adequate response” of both Yerevan and Moscow to Azerbaijan. Russia did not even “blame” Azerbaijan for “aggressive actions”. She also “did not strengthen the support of her ally Armenia.” There were only words: Moscow’s call for Armenia and Azerbaijan to maintain a dialogue around the situation in Nagorno-Karabakh.

Finally, experts with some irony noted that Russian officials said: Moscow will continue to supply weapon both states - both Armenia and Azerbaijan.

And here are the reports from the two sides of the conflict.

PanARMENIAN.Net referring to the data of the NKR Defense Army, reports that on August 29 on the contact line of the armed forces of the Nagorno-Karabakh Republic and Azerbaijan, Azerbaijani units violated the cease-fire about 950 times. In the direction of the Armenian positions, more than 17.500 shots were fired, including from 60-, 80-, 120-mm mortars and RPG-7 and AGS-14 grenade launchers. Also, the Azerbaijani side used Turkish-made TP-107 rocket launchers.

30 august portal 1news.az reported that the Armenian units during the day 112 once violated the cease-fire in various directions of the front with the use of 60-millimeter mortars and large-caliber machine guns.

Earlier, 24 August, on the radio site "Satellite" An article appeared by the president of the Center for Systems Analysis and Forecasting, Rostislav Ishchenko, “The Global Crisis and the Situation in the Caucasus”

In his opinion, the Caucasus could become the site of the nearest military crisis. The region provides Washington with a wealth of opportunities. First, Russia would certainly be involved in solving the Caucasian crisis, which would require additional resources. Secondly, the Caucasus is a bridge connecting the crises in the Middle East and Ukraine “into one big arc”, which completely covers the western and south-western borders of Russia and cuts it off from Europe. Thirdly, “the contradictions between the Caucasian states are so deep and intractable that any mediator will find himself in a situation where everyone will be dissatisfied with them”. Therefore, the Caucasus may be the nearest point of US destabilization efforts. The political scientist considers Armenia to be the most vulnerable link among the Caucasian states. The rate "would have been made on defrosting and rapid escalation of the conflict in Nagorno-Karabakh." “... in the specific conditions of the Caucasus,” the author writes, “the resumption of hostilities in Nagorno-Karabakh with the danger of almost instantaneous escalation into a full-scale Armenian-Azerbaijani war puts Russia in an extremely disadvantageous situation, when any of its decisions turn both Yerevan and Baku against it. Moscow will not be able to come out in support of one of the parties to the conflict in this situation. Mediation offers will not be accepted until they are backed up by real strength, since in this situation both sides will consider themselves right (subjected to unprovoked aggression) and strive for unequivocal victory and punishment of the “aggressor”. The imposed compromise will leave both parties dissatisfied, who, in principle, are already unhappy with the uncertain (from the international legal point of view) situation around Nagorno-Karabakh, and then the gasoline of war will be splashed on the embers ”.

According to the expert, “in the coming months, we can expect domestic provocations sponsored by the United States in Armenia (supported by military provocations in Nagorno-Karabakh).”

On the subject of a possible outcome of the conflict argues military political analyst Semen Bagdasarov, who gave an interview "Free Press".

An objective assessment of the situation shows that the Azerbaijani army exceeds the Armenian army and self-defense units of Nagorno-Karabakh in number and technical equipment, the expert said.

“Azerbaijani President Ilham Aliyev understands that if he manages to liberate at least one of the seven districts in the so-called buffer zone of Karabakh, he will become a national hero, like his father, Heydar Aliyev. But he is also well aware that despite the superiority in manpower and technology, his army may be defeated, ”said Baghdasarov.

Karabakh self-defense detachments occupy the strategic Omar Pass. As far as I understand, the task of the NKR army in the event of war, first, is the operational occupation of Ganja (former Kirovabad) and the left bank of the Kura - that is, the territory of Azerbaijan with oil and gas pipelines. Secondly, the strike in the direction of the Caspian Sea is to Lenkoran, where Talyshs live compactly. I remind you that in 1993 there was such a Talish-Mugan republic, which was suppressed by the Azerbaijanis. And now they can come back to this now. Moreover, Talishes are trained at the Suvorov and Madatov Military School in Nagorno-Karabakh. In addition, 24 has a day in the radio station from Stepanakert in the Talysh language is actively promoting. If such a plan works, it will be a complete disaster for Aliyev.

I will especially emphasize that the Karabakh Armenians are a very specific subethnos of the Armenian people, who masterfully know how to fight and fight. No joke, this nation gave the USSR 5 Marshals and 37 Heroes of the Soviet Union.

The deputy director of the Institute for Political and Military Analysis, Alexander Khramchikhin, told JV that the likelihood of a new war between Armenia and Azerbaijan is high: “Of course, a frozen conflict can exist, but do not forget - Azerbaijan lost 20% of its territory. And I see no reason why the Azerbaijani leadership will continue to put up with this. Why then does it invest a lot of money in its armed forces? Azerbaijan has purchased significant consignments of offensive weapons from Russia: only tanks T-90 about 200 pieces, as well as heavy flamethrower systems, divisions MLRS "Smerch", etc. ".

“... Russia has obligations to protect Armenia,” the expert noted further. “And if the conflict enters the territory of Armenia, we will be forced to use at least the 102-th military base in Gyumri with all the ensuing consequences.”

Against the background of such gloomy assumptions and forecasts coming from all sides, including from American “shadow” strategists, the arguments about the “Karabakh” goal of Comrade Lavrov’s visit to Baku are no longer surprising. Undoubtedly, the Kremlin is making some efforts to ensure that the situation does not slide into the abyss of military conflict.

Observed and commented on Oleg Chuvakin
- especially for topwar.ru
Ctrl Enter
Noticed oshЫbku Highlight text and press. Ctrl + Enter
We are
Caucasian affairsHow to divide the skin of an unkilled bear, or Azerbaijan is trying to cut off a piece of Iranian pie
14 comments
Information
Dear reader, to leave comments on the publication, you must to register.