How Tuku "Tuknul" in a puddle

July 29 2015
25
I sit on the couch and solve the most acute problem. Emerged from nothing. And the problem is global. We need to repair two rooms in the apartment for the arrival of the "refugees" and buy an army tent for their friends and relatives. Expect a large influx of unhappy people. Given that my head is all right, then of course, a certain question arises. 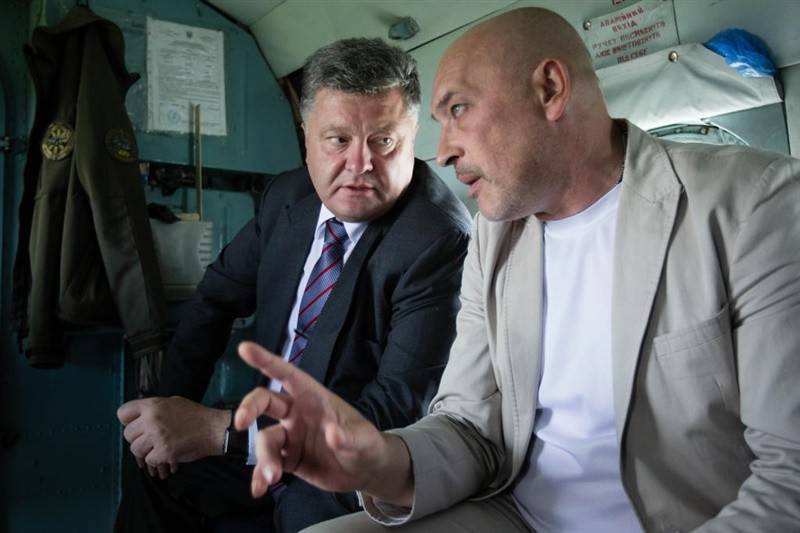 Thanks to the Internet, the answer is found. And he was found, as happens quite often, on Ukrainian sites. Or rather, on the website of the new governor of the Lugansk region of Ukraine Georgy Tuk.

Well lucky Luhansk, the fact that they remained under Ukrainian control, with the governors.

Past, Moskal, opponents almost on camera chomped. And how many helpers "lost" people, and do not want to count. This is exactly about whom the Ukrainian Maidan shouted for sure: “Moskalyaku to Gilyaku” ... Only instead of this very Gilyaks sent Moskalyaku to Transcarpathia. There it means "to impose order." But today it is not about the old. Today we are talking about the new.

So, the politician of a "new wave", not system. In a sense, to Maidan only in the internet and "sistemil". A prominent figure in the volunteer movement of Ukraine. More precisely, the spokesman of the "necessities for ...". The creator of the famous art site "Peacemaker". The frequenter of the Censor, which is not ... The founder, or rather the co-founder of the main national award of Ukraine - the People’s Hero ... The list goes on. But why?

Signed up, pre-established Tuka to public office. And not just any, but the whole "prince of an individual". Became a journalist governor! Career, I will tell you ... The pokhlesche of the late Evdokimov will be. From dirt to Kings...

And this Tuku came to the office ... And there ... Only moskalskoe everything remained ... There are all kinds of papers. Orders ... He could not even imagine that the Muscovites had built a nest in the very heart of the Luhansk region.

The very first public performance of the new governor, probably, led me to the idea that it was time to put up tents in the yard for refugees.

“First, we will destroy this infection, and then, together with you, we will think: we need growth and what to do with it?” Said Tuk in Lisichansk. I came to participate in the rally and ... said.

No, of course, after one and a half years of constant shelling, after the closure of many enterprises, Lugansk, of course, will not argue with Rostov-on-Don with wealth and other "future trophies." Like it or not, but in Rostov everything was, is and will be ... a lot. “Mom” won Mikhailovsky of Odessa on his knees, but he won’t work with “dad”.

Probably, now the Rostovites are tying knots and packing suitcases in large numbers ... Trains are being besieged by crowds of people distraught with fear. The Cossacks pull grandfather's checkers out of the storerooms and put old tunics on a big-bodied body ... I’m even afraid to call friends there.

Why is there Tuck this. We have been living on a barrel with gunpowder for a long time ... Dmitry Yarosh directly spoke and spoke. War with Russia will be necessary. Let these (in the sense of us), descendants of the Tatar-Mongols, return the originally Great-Greatan lands of the Kuban, the Voronezh and Belgorod regions.

When this Took was a blogger-journalist, all his statements and articles caused only a sad smile. Well, "left the roof in his old age." It happens. And often. Even the term is - senile insanity.

But now Tuk is already a government official. And a very high ranking official. And now I consider his "statement" as a statement by the leadership of Ukraine.

The Lugansk governor cannot but be aware of what he is talking about. And to understand that Russia will respond adequately, should in theory. About Kuban, Belgorod or Voronezh refugees is simple. You will not succeed. Even shoot the second time will not work.

To find a hundred, or maybe a thousand "thugs," who risk crossing the border, will succeed. So what is next? And then, “in response,” so many different things will arrive that not only the “Thugs,” but also the dust from the APU in these areas will remain. The same will happen if some kind of ukropatriotic scum climb into the Crimea.

Russia is not able to and will not play "war games" as it is done now in the Donbas. And will not attack. What for? We have repeatedly written that "the winner pays for a banquet." Russian Ukrainian banquet is not going to pay. We have no desire to help those who "shit" their neighbor in favor of the overseas host.

They will ask for it. Already in the social. networks and some Ukrainian media such issues are not uncommon. Already, the rating of power is simply disastrous. The insects remaining in the houses are already crawling below this rating.

What is Tuka on political "Olympus"? This is a complete failure of the Ukrainian statehood. When the situation in the economic, social, and other areas of life is put on, a populist is put in a position ... Why? It’s just that, apart from populism, the authorities can give nothing to the Ukrainians. The power of "exhausted."

Tuk's statement is nothing but a deception of its own citizens. Direct and cynical deception. Attempt to convince them that ukroarmiya growing. So, there is no defeat in Lugansk and Donetsk. So, LDNR is a temporary condition of "some areas" of these areas.

Even the purpose of this deception is clear. Simple goal. Implementation of the 12 clause of the Minsk agreements. It is 12, not fulfilling all the previous ones. In this way, Kiev hopes to "circle it" and the LDNR, and Russia, and all the "guarantors" from the Quartet. Give the border to Ukraine and then LDNR will turn into a big "pot". And it will be possible to eliminate the boiler without haste.

Only here any military who a little inquire about the state of the Ukrainian army, will laugh in the eyes of all these militant statements. Yes, over the past year and a half, the Ukrainian army has learned to fight. Yes, the army of the LC and the DNI is not so easy to resist dill. Yes, today there have been some changes in the equipment of units and divisions.

But in general, the Ukrainian army, as it was, remains "for internal use." Aviation Hardly ever. And what is, even if "it" is repaired, is not suitable for war in modern conditions. Armored forces are not just out of date. They are catastrophically behind all the armies of Europe. Outfit of the army in an archiploach state. That is why any “handout” from “friends” is so rejoicing in Kiev. Even if this "handout" is written off even a dozen years ago.

About the Ukrainian fleet and say nothing. Somehow still floating (I can’t write a “walker” precisely because the sailors always correct the “landkeepers”: swims ...) “Getman”, a pair of the most ancient recreation centers ... and a bunch of rubber boats. I do not even want to touch on the "naval" theme.

But the most important thing is not even this. The army of Ukraine has no promising command personnel. Do not prepare "sovremenny" officers now in Ukraine. Even the Ukrainian “horse” of the Soviet period, artillery and reconnaissance, have been lost. And in the modern army without a good education, the Suvorovs and Kutuzovs are no longer being brought up.

And finally, I will write the reason why Ukraine will not be able to defeat not only huge Russia, but also small LDNR. This reason everyone knows. More precisely, feel. Like dogs. I understand, but I can not say. I will help "materialize" feelings into words. Never beat those with higher motivation. Those who know why he dies and kills his enemies.

Donetsk residents know why they are going to die. They know what to protect. And the Russians know. Therefore, one cannot see victory for their enemies.