Why did not the Soviet leaders understand? Answer V.V. Putin 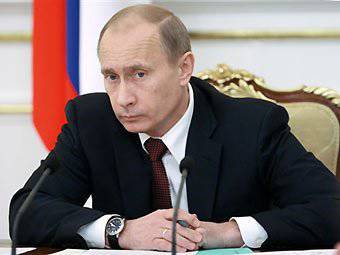 This question, judging by the calls to the editors of our readers, has puzzled them a lot after the revelations of the current Prime Minister and the permanent “national leader” V.V. at once on the three main TV channels. Putin's And most of all, they were touched by their peculiar, to put it mildly, Putin’s assessment of the activities of the post-war leaders of the country.

“I don’t remember something,” Vladimir Vladimirovich remarked, not without complacency, “that the post-war Soviet leadership, Soviet post-war leaders work as intensively as I do or the current president Medvedev Dmitry Anatolyevich. Something I do not remember.

However, our prime minister didn’t particularly curse the former leaders for such a disapproving passivity, but, on the contrary, tried to justify them in some way with something:

"They could not - and because of their physical condition, and because of misunderstanding, what should be done: maybe they would have moved, just did not understand ... And there was no will to do it."

Score, frankly, not very flattering. But people are again at a loss. What a miraculously unimaginable Stalin and his comrades who were at the head of the party and the state, not understanding, as Putin says, what to do, and not having physical strength and will to act, managed just the same for 5-8 years after the hardest of war to raise from the ruins of destroyed cities and factories, to create a powerful nuclear industry from scratch? And also to master the oil riches of the Volga region (“Second Baku”), put on stream the construction of the world's largest hydropower stations, start building thousand-kilometer-long forest protection belts that saved arable land from dry winds? .. And yet, almost every year, to reduce food prices for the people and goods.

Next - "Khrushchev" decade. You can probably make a lot of claims Nikita Sergeyevich and his team. But it was precisely in this decade that for the first time in the world a Soviet satellite went into Earth orbit. It was in those years that the world shockedly watched the flight of the first cosmonaut of the planet, Yuri Gagarin. It was then that world-class scientific schools were born in the USSR, nuclear power plants, icebreakers, and the submarine fleet began to be built ...

It was then that the great virgin land began, and unparalleled in stories the epic of the development of the subsoil of Western Siberia, which received further rapid development in the Brezhnev years. It was a job, the fruits of which still give the opportunity to make billions of oligarchs stuck to oil and gas pipes, and the current authorities somehow make ends meet in the country impoverished under their rule. It is no coincidence that today even some of the inveterate liberal “reformers” have begun to give compliments to the “stagnant” Brezhnev era.

So, the post-war Soviet leaders, according to the version of the current prime minister, did not understand what to do, did not “move” “because of their physical condition” and did not have the will to act. A sad, of course, picture, but, as we see, something did work for them.

Well, how do our present leaders, all understanding and full of young forces, “move”? According to Vladimir Putin himself, they are working very intensively.

Why, what his words, the people themselves, several times a day, can watch on television news as members of the governing tandem receive ministers and governors in their cabinets, how they praise them or in fatherly criticism for individual flaws and shortcomings. And how beautifully they look in the cockpit of a supersonic fighter or in the Pro-Horov ё-mobile! They easily soar into the clouds and scuba dive into the seabed, from where our current prime minister and future president easily drew two antique, almost Homeric times, amphoras. And how attractive he looks when fishing, without clothes, admiring the fair sex with his naked torso and muscular muscles!

And how gracefully the current president and future prime minister Dmitry Anatolyevich is dancing to rock music! It was not for nothing that Fedor Bondarchuk himself publicly, almost begging, appealed to him with a request not to stop dancing. It is not excluded that the experienced eye of the artist and director caught, noticed the true vocation of a man who became for some reason the president of Russia.

Maybe Fedor is right. People of art, as they say, know better.

Yes, in fact, Vladimir Vladimirovich himself told the heads of the TV channels how members of our inseparable tandem intensively used and used the fast-running time and burden of power: “We regularly met, rested together, went skiing, just played sports ...” And personally: "I have been engaged in martial arts all my life."

It is commendable, of course, but, as one of our readers said about this, “it’s time to take care of the country. And then the village is dying out, the industry is on its side. Corruption. The ships are sinking, the planes are falling, the spacecraft then explode in flight, or they confuse orbit. And neither the end nor the edge of all this ... is not expected. "

The reader does not hide his indignation, the words begin to speak not from literary vocabulary. But, probably, it can be understood in some way.

In fact, 20 has already turned that “sovereign democracy”, whose all-understanding leaders set out to bring happiness and prosperity to “dear Russians” at the turn of the 20th and 21st centuries. The distance, as a famous Griboyedov character would say, is of enormous size. All twenty years, our tandem appeared in the corridors of power, and the last decade was at the highest state posts. What are the fruits of their intensive efforts, comparable, according to Putin, only with the hard labor of slaves in the galleys?

Not alien to self-criticism, as it turned out, Vladimir Vladimirovich spoke about this to the heads of Russian television channels with harsh bluntness: “We allowed the state to fall apart” ... “The complete collapse of the social sphere, the stop of not individual enterprises, but entire industries” ... “The whole Caucasus was flooded with blood applied Aviationheavy equipment Tanks... ”(This is about two Chechen wars, the last of which Putin led in the role of first prime minister, and then president and Supreme Commander).

Thank God, the wars have ended, but Vladimir Vladimirovich chose to speak very cautiously this time about the subsequent actions of the ruling regime in Russia, about the desired “stability”.

“... To say that there will be no worse, I would be careful,” the “national leader” honestly warned us. - It’s enough to take two or three wrong steps (and how many have already been done! - N.K.), and everything that happened before can cover us so quickly that we don’t even have time to look back. We have done everything on a living thread both in politics and in the economy. ”

This is where our post-war Soviet leaders would certainly have come to utter bewilderment. Twenty years of "intensive" and even "hard labor" work, and in the end - tailored somehow, "on a living thread", economics and politics, which can easily collapse from two or three wrong steps! Not much.

This is what the Soviet leaders, who successfully ruled one of the two great world superpowers, probably could not understand for anything.